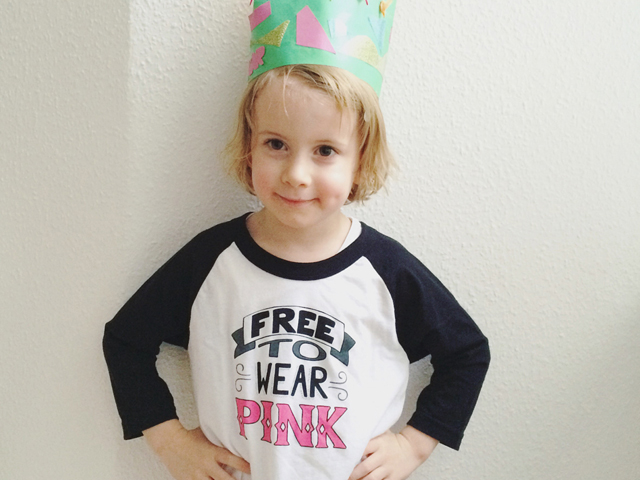 As the mother of two boys, I never thought I would have to worry about the colour pink. No, scrap that. Not ‘worry’. That is not a word I want to associate with pink. Because I am not worried. But I have been spending a LOT more time thinking about pink, talking about pink and defending pink than I would have ever imagined.

There are countless posts already out there about unnecessary gender stereotyping of children, in which the colour pink more often than not seems to play a central role. In the past, a lot of the discussions have focused on the girls’ side of the debate, i.e why clothing and toy manufacturers seems hell bent on shoving every imaginable shade of pink and not much else in little girls’ faces. The crux of the argument being: girls like other colours too. To the extent, that pink has been almost vilified. But recently, the other side of the debate has been making itself heard too. That it’s okay to like pink. And that it’s okay to like pink if you are a boy. Let me start by saying this: PINK IS JUST A COLOUR! If you follow me on social media, you will already be aware that my older son loves the colour pink. In fact, he has loved pink for as long as I can remember, since he was old enough to express his preferences and opinions. And I’m okay with that. Why shouldn’t I be? PINK IS JUST A COLOUR! If you’re not okay with it, I’ve probably already unfriended you on Facebook faster than you can say Pepto-Bismol. Pink used to actually be deemed more suitable for boys, because pink was considered a stronger colour, a derivative of the regal red, whilst blue was considered more delicate and suitable for girls – just think of all those paintings of the Virgin Mary dressed in blue. Or, as my son puts it: “In the olden days, pink was for boys. And in the new days, girls are allowed to wear pink too.” He’s generous like that.

Anyway, getting back to the present and the facts in hand, my boy loves pink. And I’m proud of him. Not in a ‘hey, look, my boy loves pink, how cool and gender stereotype defying is that’ kind of way. I have no strong feelings as to what his favourite colour is. If he woke up tomorrow and said ‘hey mum, I’m totally over pink’ I would maybe be a bit annoyed at all the money we’ve spent on adding pink pieces to his wardrobe recently, but other than that nothing ground-shattering would happen. He would tell me his new favourite colour and we would roll with that. No, I am proud of him because he loves pink and he doesn’t care what anyone else says. He is confident in his choice, and – so far – hasn’t let himself be talked out of it by ignorant people who seem to have nothing better to do than decide what colours other people should or should not like. But as you can maybe imagine, he does get a lot of comments. As his mother, I get a lot of comments. At 5 years old, a boy wearing pink isn’t just cute any more. It’s noticeable. It’s noticeable to the degree that people seem to think it’s their right to pass judgement on it. The comments tend to fall in to two categories. Firstly, comments from kids, who are at best just curious and at worst are regurgitating the narrow minded gender stereotypes they have been taught by adults who should know better. Those conversations usually go something like this:

You look like a girl!
– Why?
Because you are wearing pink trousers.
– I am a boy. They are pink boy trousers.
Okay.

You get the gist. Like I said, my boy is pretty confident when it comes to these confrontations with other kids. And he usually delivers his retorts in a slightly scathing ‘don’t be an idiot’ tone of voice, that seems to cut off any further comments or teasing. He once explained to me, that the other kids just hadn’t been taught yet that boys can wear pink too. That’s how he frames it in his mind.

The other category that comments fall in to, is comments from adults who should just shut the f*** up! Excuse my language, I rarely swear, but this is a topic that makes me quite angry. Because here’s the thing: whilst he shows no lack of confidence when confronted by comments from other kids, I have noticed him start to falter a little when it comes to comments from adults. In the same way that he doesn’t understand when I don’t have an answer to yet another of his impossible questions about life, the universe, and the inner thoughts of strangers we pass in the street – ‘But why don’t you know? Mums know everything!’ – he seems to have a deep, and possibly misplaced, respect for the wisdom of adults in general. So when adults continuously make comments that imply there is something wrong about him wearing pink, he starts to wonder whether they are right. Which they are not. Because PINK IS JUST A COLOUR. So, rather than attempt to replicate the many excellent blog posts and articles already out there on the subject matter, I thought I would add some value to the discussion with my handy

*He* is a boy. I appreciate that it’s not always easy to tell at first glance, with his shoulder length hair and pink clothes, but half of the time it’s not even necessary to ask. Unless you are a supervisor at a swimming pool and your job is to make sure everyone is using the correct changing rooms or showers, does it really matter? Does the staff member collecting tickets at the bouncy castle entrance, or handing out bags of building bricks at the Lego store, really need to know whether my kid is a girl or a boy? If you really do feel the need to know, you could just keep it short and sweet and ask ‘Girl or boy?’ The English language is great like that, in that you’ll still be understood. Just please don’t say *it*. Especially not to his face. It’s just rude.

You let him wear pink?!

Said in the same tone of voice as one might say ‘You let him play with guns?’ or ‘You let him get a tattoo at age 5?’ Umm, yes, I do let him wear pink. You know why? Because he likes it. Because it suits him. Because he’s old enough to make his own decisions about what he would like to wear. And because PINK IS JUST A COLOUR!

Is he the eldest?

This may sound like a harmless question, but the unspoken question behind it is always ‘Or is he wearing hand-me-downs?’ People assume the poor boy is having to wear pink clothes that have been handed down from an older sister. Because, obviously, he himself wouldn’t chose to wear pink if we were buying him new clothes. Just for the record, yes, he is the eldest in the family. The eldest sibling, and the eldest cousin. And yes, he choses the clothes himself. Because he likes pink.

Aren’t you afraid he will grow up to be gay?

I wasn’t even going to dignify such an utterly ridiculous question with an answer, but just to get something straight (no pun intended): Wearing pink does not make you gay. Being gay is not, as your question implies, a bad thing. That’s all that needs to be said.

You will notice the ‘but’ at the beginning. This comment , when it comes, *always* comes as a follow up. As I mentioned earlier, I appreciate that it’s not always easy to tell at first glance whether my kid is a boy or a girl. However, some people really need to learn to know when to stop talking! My kid and I know better than you do that he is, in fact, a boy. So once the mistake has been clarified, stop insisting! It’s just rude, especially the variation ‘But you look like a girl!’, said to his face. It’s bad enough coming from other kids (see above), but as an adult you should know better.

While the previous comments are ones that are usually directed at me – though more often than not within earshot of him – these last two are ones aimed squarely at my son. ‘Hello little girl’ has come from adults who know him, and who know damn well that he’s a boy. They think they are being funny. Well, they are not. It actually upsets him. I know that for a fact, because he told me. So please, just don’t!

Do you really like pink or did your mum chose that for you?

This is the one that, out of all comments, threw me the most when I first heard it. Because I guess the other comments were ones I was kind of expecting to hear at some point, whereas as this one…WTF? I can’t even. What are you trying to say? The implication seems to be that I am compensating for the daughter I never had by dressing my son in pink. Which is ironic, because I don’t even wear pink myself. While I don’t dislike pink, it’s probably one of my least favourite colours. Also, I don’t suffer from any gender disappointment where my children are concerned. I am more than happy with my two beautiful boys. In fact, I have been known to say that if we are ever brave enough to try for a third child, I would quite fancy another boy. So the suggestion that I am forcing my son to dress in pink, for whatever reason, is utterly ridiculous. And coming from one of his nursery teachers, no less. I was reassured, that this particular teacher was just quite old fashioned in her views (because apparently that makes it okay), but my son has had similar comments directed at him several times since then. He just likes pink. He choses his pink clothes himself. It’s not that hard to understand!

And then there was that time his friend’s mum asked him ‘Did you chose that pink jacket yourself?’ I was ready to fly in to full Mama Bear protective mode, when he told her yes, and she continued “Fantastic! It’s a great jacket and suits you really well!” I almost cried. But for once, out of joy.

* Please note, I am not in any way implying that ‘looking like a girl’ is a bad thing. What does that even mean? Girls come in all shapes, sizes and appearances. ‘You look like a girl’ should therefore not even been considered an insult. But that’s another whole article waiting to be written. In the context of this article, the reality is that the comments were not intended as a compliment.

By the way, the Boy’s ‘Free to Wear Pink’ T-shirt is from Quirkie Kids. You can read about them, and other ‘anti-gender stereotyping clothing brands’, in this great article: ‘These Aren’t Your Typical ‘Boy’ Clothes, But For A Very Good Reason‘. You might also like my ‘Boys Who Love Pink’ Pinterest Board!