For those of you who have been following the blog for a while, you will know that last year I was tracking all the books I read with my younger son. Every single one of them! He was 5 when we started in January and then turned 6 at the end of November. It’s taken me two months, but I’ve finally found the time to add them all up and in total we managed to read 445 different books. But because we read some of the picture books multiple times the total numbers of books we read is a whopping 592! That’s in 366 days, since it was a leap year.

I do like a bit of data crunching (years of working in audience research will do that to you), so I couldn’t help myself and tally up a few things, starting with how many books we read each month. Our busiest months were July to September, which reflects the increased reading over the summer and then rediscovering our first batch of seasonal books at the start of Autumn, followed by December when we read our way through the gazillion Christmas books we own!

(Note: the monthly totals include some of the chapter books twice if we read them over more than one month, so all twelve months add up to slightly more than the total for the whole year where I only counted each chapter book once)

I also looked at how many books we read in each language, which worked out at 77% in English and 22% in German. The eagle-eyed among you will notice that only adds up to 99% and that’s because we also read a couple of wordless picture books. The fact that English books dominated so much was a real eye opener for me, because I thought we had been making a big effort to read more German books. Though maybe we did and the percentage of German books would have otherwise been even lower. I’ve stopped documenting every single book we read (it was a hard slog at times keeping track of them all!), so I won’t have any numbers to compare this year, but it’s definitely going to make me think twice going forward when I reach for a book on our shelves. The other thing I tallied up, was how many of each type of book we read, which came to 88% picture books, 8% chapter books, 3.5% reference books, and 0.5% graphic novels. The dominance of picture book was no surprise to me though, as they were. a quick read compared to chapter or reference books which we would read over several days or even weeks.

The final thing I tallied up, was which picture books we read the most. As I mentioned above, we read some of them multiple times, and these were the Top 5. I was super pleased to discover that three of the top five book were German! Two of them were old favourites we have had for years, and the third was a new one we bought last year that became an instant favourite. The same goes for the two English books to make it in to the Top 5. Here are the details if you want to check any of them out:

2nd Place: Zwei für mich, einer für dich, by Jörg Mühle (available in English as Two for Me, One for You)

Joint 3rd Place: Firefighters, by Anne-Sophie Baumann & Benjamin Bécue; All the Ways to Be Smart, by Davina Bell & Allison Colpoys; Fünfter Sein, by Ernst Jandl & Norman Junge (available in English as Next Please)

You can also find ALL the books that we read, over on our Bear & Fox Books Instagram account.What have been your best reads from the past year? We’re always on the look our for great recommendations.

Disclaimer: The links in this post are Amazon affiliate links. That means that if you buy anything via these links I earn a small percentage, at no extra cost to you, which helps to keep this blog running. Thank you. 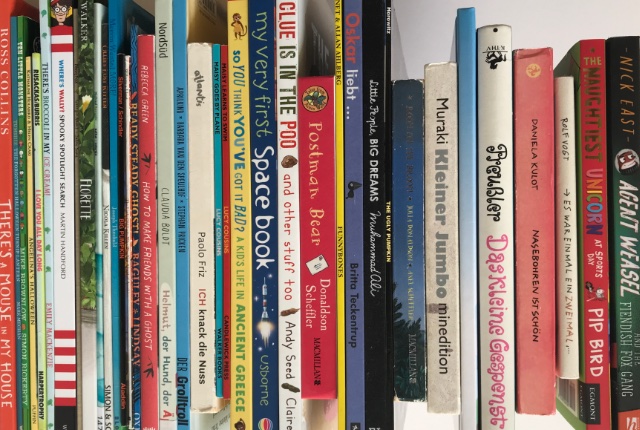