Welcome to Week 5 of our free virtual summer camp. Today we are going to be making cars out of recycled toilet rolls. You could also use other cardboard tubes, such as from kitchen paper towels, and cut them to size. This is a really fun craft, because the cards actually roll along and they are the perfect size for Playmobil or Lego Duplo figures, so we have been having lots of car races with ours. 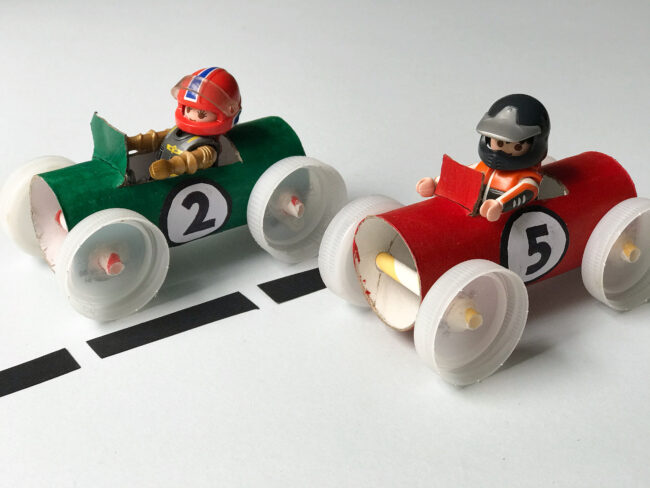 Who is this activity suitable for?

Kids of all ages can join in with painting and decorating the cards. Some adult help may be required for making holes with scissors in the tubes and wheels, depending on age. I’ve put together a step-by-step guide with photos below. 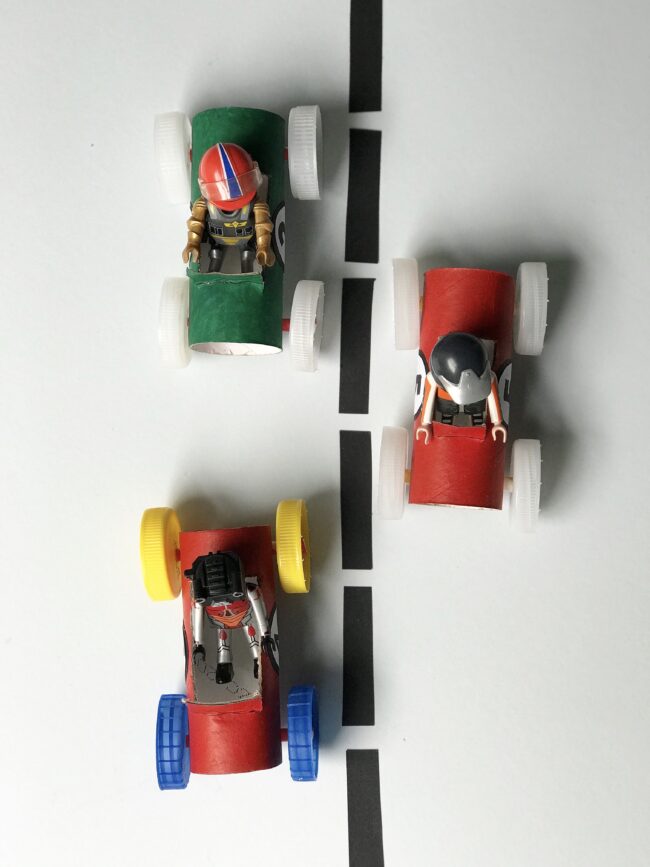 Here’s what you’ll need to have ready: 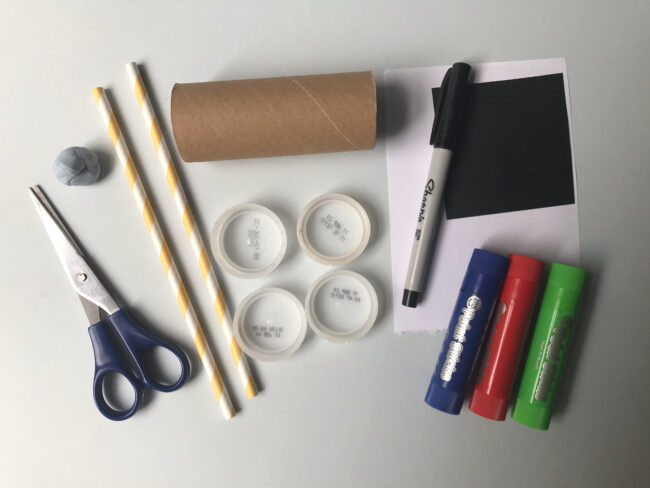 Step 1: Paint the toilet roll. We used our Little Brian Paint Sticks for this*, which worked well because they have good coverage and they dry really quickly so there’s no waiting around to do the next step. I also love how little mess they make compared to other paints. 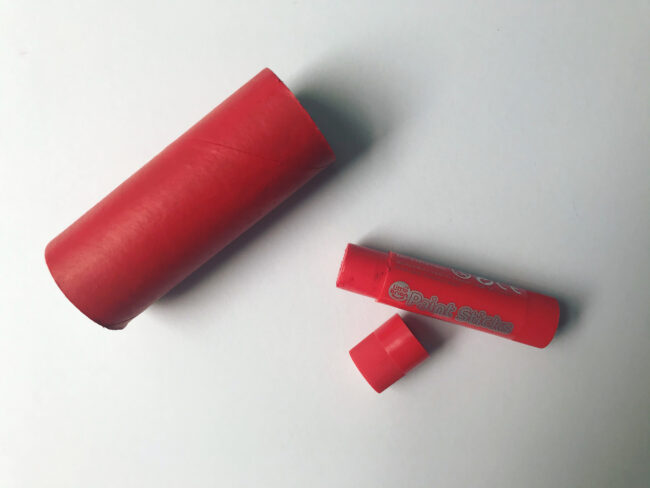 Step 2: Make two holes at one end of the toilet roll. You don’t want them to be exactly opposite each other, but slightly closer together (if you look ahead to step 3 you will see what I mean). Then make two more holes at the other end of the toilet roll, in the same places. Make sure the holes are big enough for the straw to easily turn around in them without getting stuck. 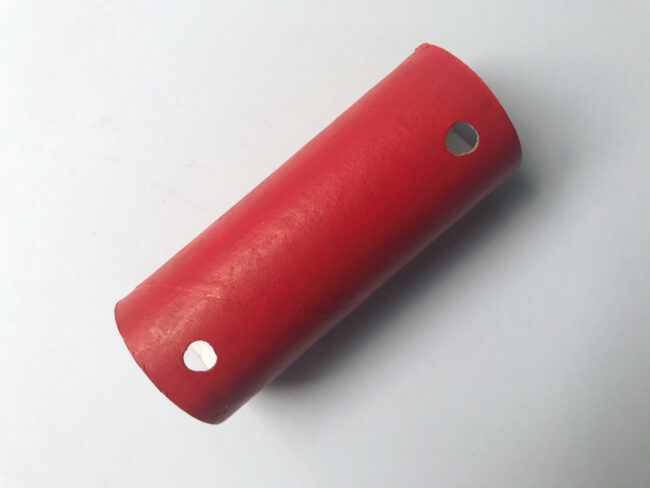 I used a single hole punch for this, which I invested in because I do a lot of crafting, but you can also make the holes with the tip of a pointy pair of scissors. 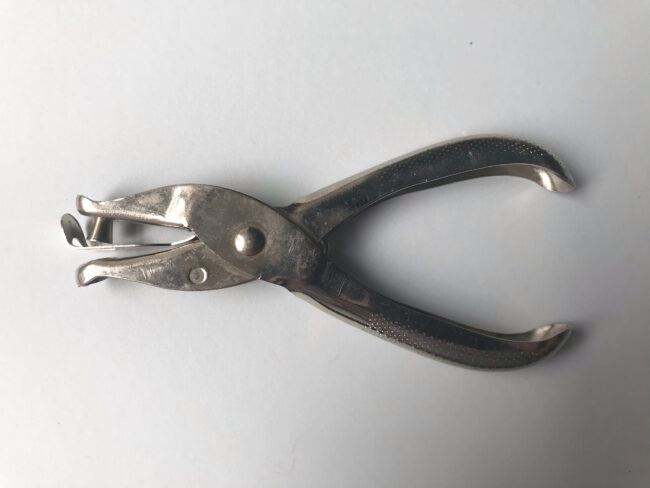 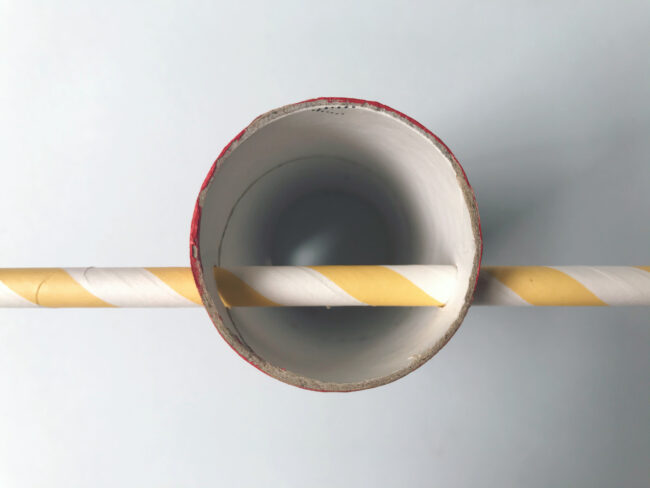 Now push the other half of the straw through the holes at the other end. 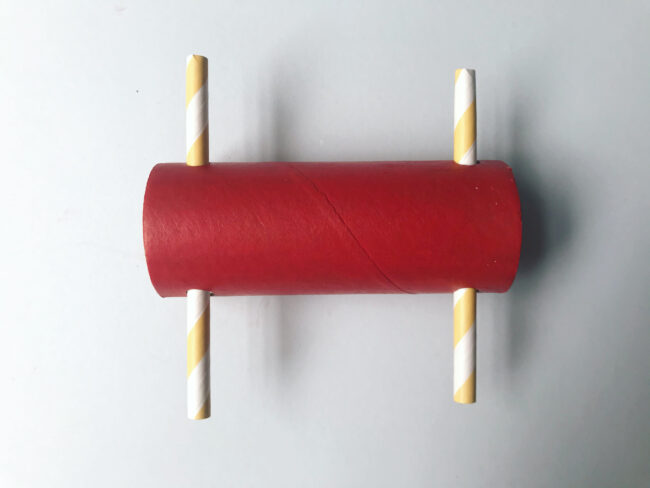 Step 4: Punch or poke holes through the middle of the four bottle tops. Careful not to stab yourself with the scissors doing this! Twisting the scissors rather than trying to stab right through the lids works best. Ideally, you want to holes to be tight enough that the end of the straw can fit through but doesn’t move.

Step 5: Push the bottle tops on to the ends of the straws, with the flat sides facing the toilet roll. Position them as you want them, then cut off the excess length of the straws. 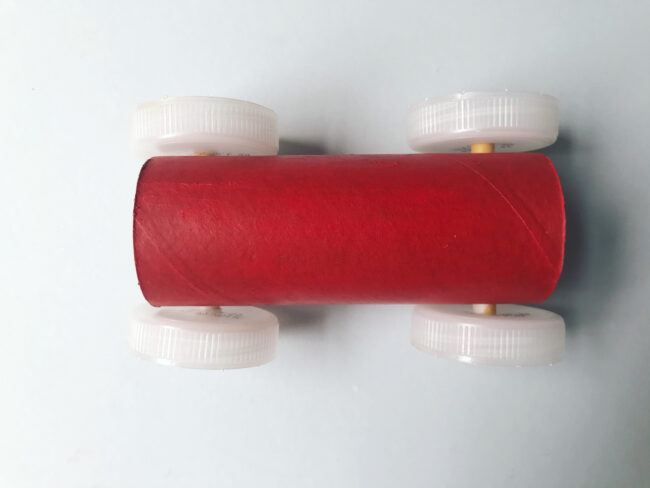 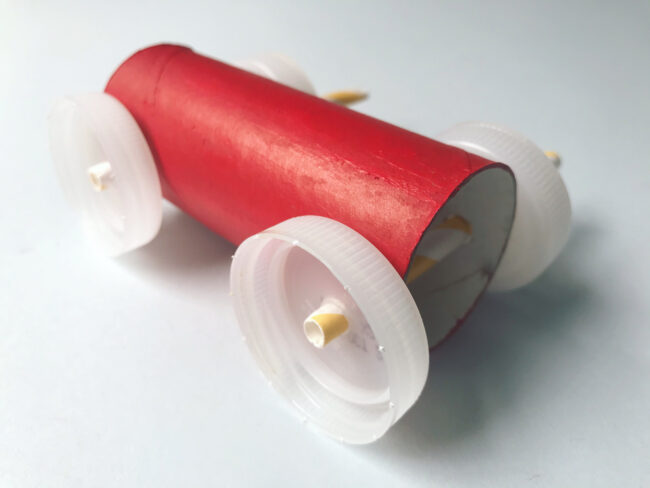 Step 6: If the holes in the bottle tops are tight enough, they will stay in place just as they are. If they are a little loose, you can secure them with some blu-tack or plasticine at the end of the straws, or with a dab of glue from a hot glue gun if you have one (adults only!) But if you have made the holes tight enough you won’t need that. 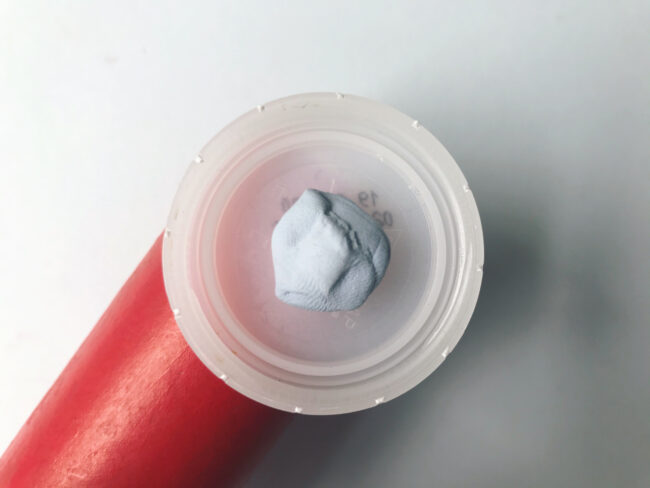 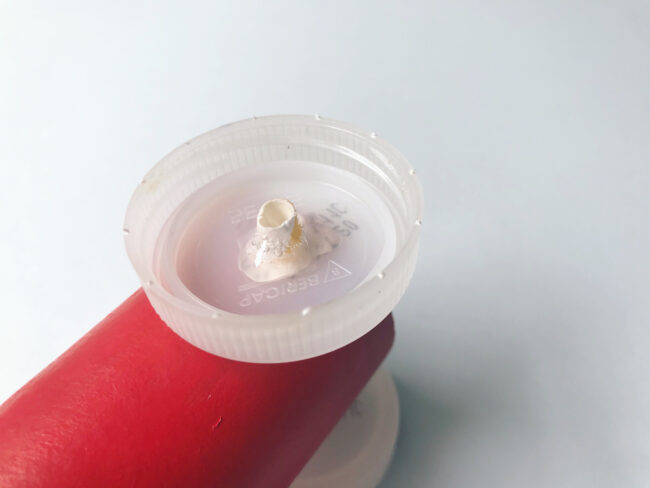 Step 7: On the top of the toilet roll, with a pointy pair of scissors (this may be an adults only job!) cut out a rectangle plus a little flap, as shown in the picture below. Bend up the flap. 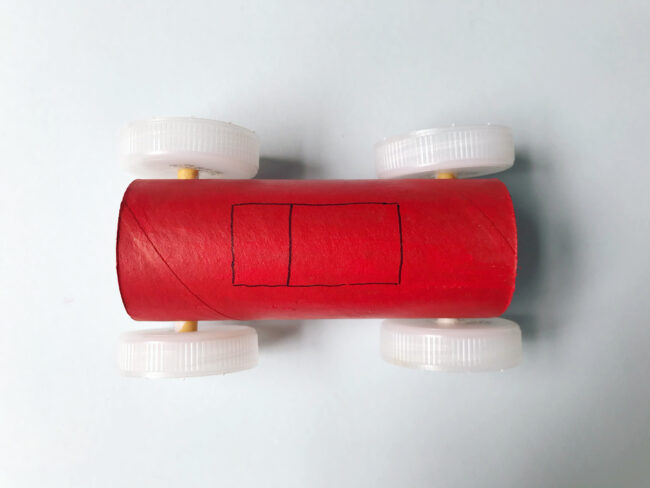 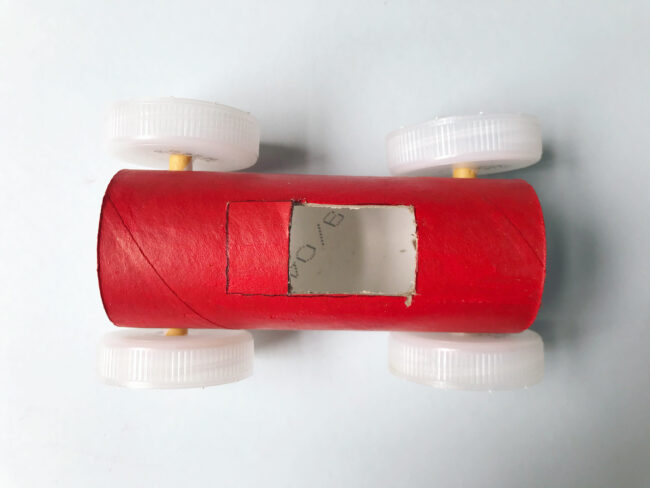 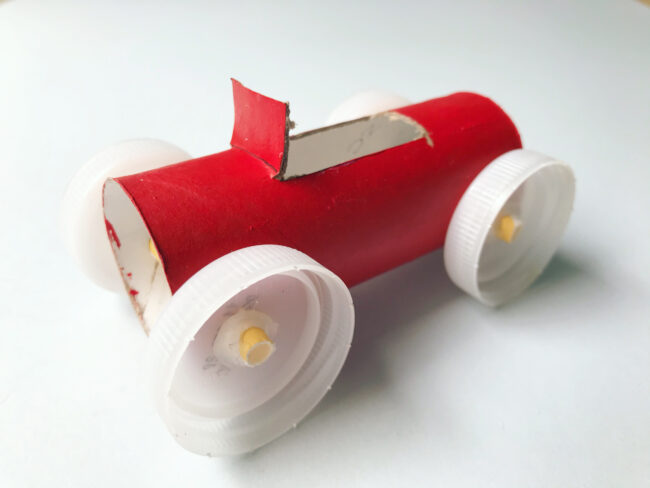 Step 8: The final step is optional but we cut out some paper circles, drew numbers in the middle, and glued them on to either side of our cars to make them look like race cars! You can of course paint numbers on instead, or decorate the cars in any way you like. 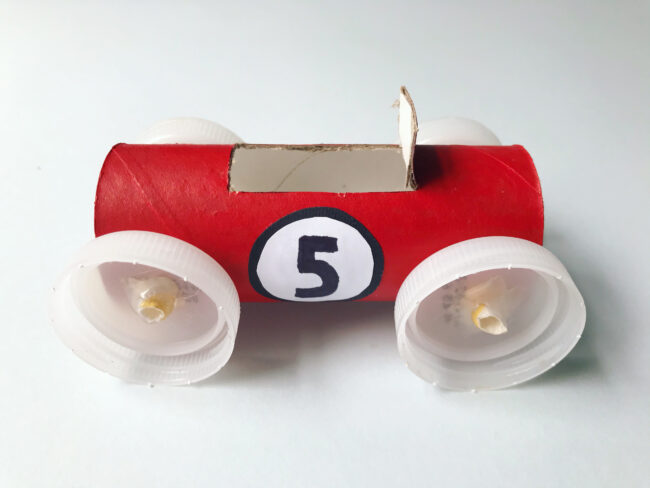 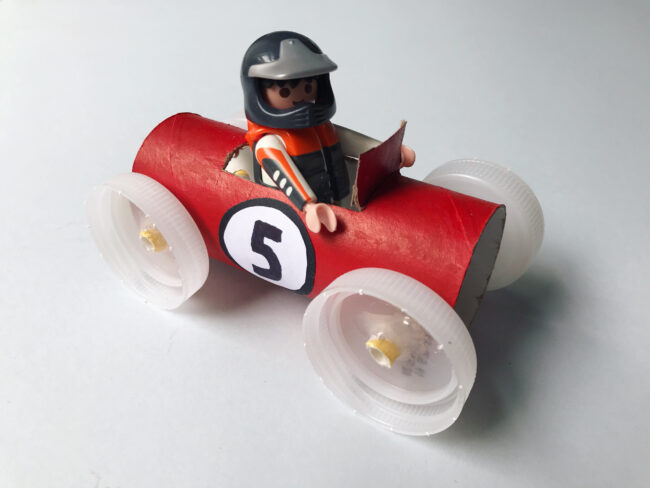 Here’s another one my eldest made, where he adapted the design a little. Apparently it’s made to look like a car from a TV show or video game (I confess, I was only half listening to the details…) 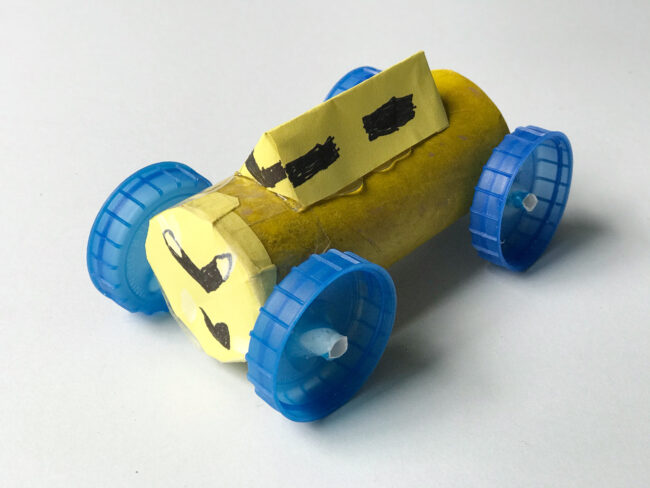 If you enjoyed today’s activity, please feel free to leave a comment or tag me in on Twitter and Instagram. I would love to see pictures of your cards too, if you want to share. And in case you missed it, check out our other summer camp crafts. Remember to use the hashtag #BearAndFoxSummerCamp if you are sharing any photos! 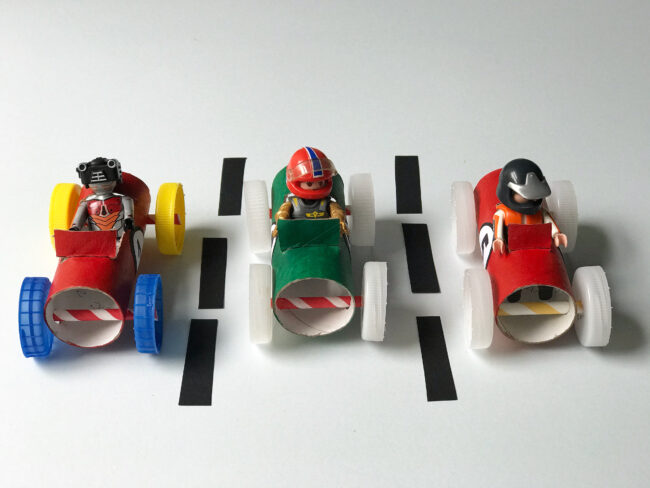