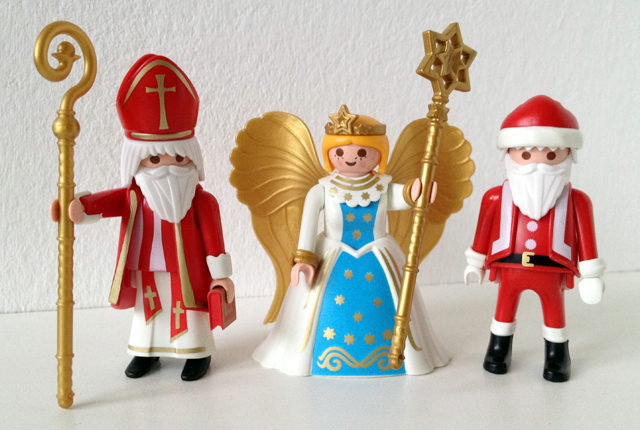 How we celebrate Christmas – twice

As a Scottish-German family, the question I probably get asked the most is whether we bring up our kids bilingually and, if so, how? I’ve actually written about it before, so you can read my answer to that question in my previous post. The second most asked question, is probably how do we celebrate Christmas? The two cultures don’t seem that far apart as perhaps some other cultural constellations might, both being Western, European countries, but there are some significant differences in the celebration of Christmas – who brings the presents, when do we open them, when do you put up our tree, and what do we eat? All these are things people want to know. And how on Earth do we go about combining the two, without the different traditions contradicting each other and, most importantly, without overloading the kids with too many gifts. To answer that last question up front – our kids DON’T get MORE presents, just because we celebrate Christmas twice. They get exactly the SAME AMOUNT, just SHARED OUT over three different days. Three days? Yes, that’s right. But let’s start at the beginning.

The clash of traditions usually starts in early December, with the question of when to put up the Christmas tree. In Germany, you don’t put your tree up until Christmas Eve, though that is changing in many places, but my parents for example still stick to it. When I was little, the living room would be out of bounds from the morning of Christmas Eve, and my mum would decorate the tree behind closed doors. The first time we’d get to see it, was when a bell rang to call us in and we’d step through the doors and see it fully lit, surrounded by presents. In Scotland, I remember trees popping up in windows from early December onwards and the Husband always thought it was weird to wait so long. We used to compromise and meet half way through December, then the boys came along and the tree kept creeping in earlier and earlier. We moved the compromise to ‘not before St Nicholas Day’, but this year I just folded completely and we got our tree the first weekend in December. And we always decorate it together with the kids.

In Germany, St Nicholas brings gifts on the 6th December. On the night before, as is tradition, the kids clean their shoes and put them outside their bedroom door, with a little treat for St Nicholas and his horse. When the kids awake the next morning, their shoes have been filled with a small chocolate Santa, an orange, a handful of chocolate coins and walnuts (yes, the same things every year) and a small gift. Something like a small Lego set, a CD or a book. Naughty children may find a rod or rocks in their shoes, but luckily that’s never happened in our house. St Nicholas also often pays a visit to schools and nurseries, so both boys brought home a little bag of sweet treats this year.

On Christmas Eve, Christkind comes in the early evening to leave a small gift for everyone under the tree. Christkind basically translates as ‘Christ Child’, and is the gift bringer in some regions of Germany, whereas in other regions the ‘Weihnachtsmann’ (literally ‘Christmas Man’, a.k.a. Santa) brings the gifts. The Weihnachtsmann is gaining more and more in popularity, but I grew up with Christkind so that’s what we are sticking too. It also causes less confusion, when Santa then comes the next day. As with decorating the Christmas tree (see above), Christkind’s visit usually happens behind closed doors and the ring of the afore mentioned small bell signals that you can come in. And every year, would you believe it, Christkind has just left! By now, we’ve kind of established that the gift from Christkind is new pyjamas (which they need anyway) and a Christmas DVD to share.

In Scotland, things are a little simpler. Gifts are only brought on one date, and there is one gift giver. Well, two. Father Christmas and Santa Claus. But whilst the two have different origins and histories (too long to go in to here, but feel free to look it up), in modern times they have essentially become interchangeable, so we have decided to stick with Santa. So on Christmas Day, the kids awake to find the stockings they have hung up the night before have been filled by Santa, with a couple of small trinkets – pens, stationary, Matchbox cars, mini puzzles, that kind of thing – and more chocolate coins, nuts and oranges.

And that’s it. ALL other gifts are from actual people – parents, grandparents, aunts and uncles. The kids know exactly who they came from and whom to thank, but with the Christmas Eve Christkind gift and the stockings filled by Santa, we can still keep some of the Christmas magic whilst being able to include both traditions without going overboard. And we simply split opening those other gifts over both days, with gifts from German friends and relatives on Christmas Eve, and those from UK or US friends and relatives on Christmas Day after breakfast. They also get to open our main gift on Christmas Day too.

Finally, the food. As has been the tradition in my family, a tradition we have now carried on in to our little family, we always – and I mean ALWAYS – have potato salad and sausages on Christmas Eve. As do many households throughout Germany. On Christmas Day, we have our main meal. Since the Husband grew up without a full traditional British Christmas Dinner each year, there is no pressure to do the whole turkey & trimmings thing. So we just do something a bit special that we wouldn’t normally do, usually a roast of some kind. In Germany, goose is quite common at Christmas, so we’ve done that a couple of times. We’ve also done a Christmas Ham, roast beef, and even rabbit one year. For the trimmings, we pick and chose what we like best. Nobody really likes bread sauce that much, but we’re quite fond of cranberry sauce. Brussels sprouts and roast parsnips are a must, and if goose is on the menu then you’ve got to have red cabbage. I don’t think we’ve ever done stuffing, but potatoes are always part of the meal. As for dessert, despite living in the UK for 20 years, I hate Christmas pudding and Christmas cake, so we usually settle for something like trifle, tiramisu or a fancy crumble. And another Christmas food tradition we have introduced to our little family, is having a full cooked Scottish breakfast! Definitely something worth delaying opening presents for. Yum yum.

So that’s how we celebrate Christmas, twice. Do any of you have traditions from different countries or cultures that you somehow have to acknowledge or combine? I’d love to hear about how you do it. Please feel free to leave a comment about it below!