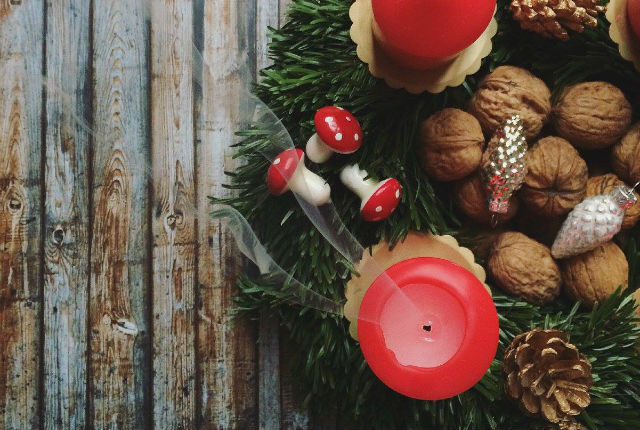 Earlier this week, I was chatting with someone about how we celebrate Christmas in Germany, and they were surprised at how much it differed in some ways from Christmas in the UK. My lucky boys of course get to grow up with the best of both worlds, but for those of you not in the know, let me share with you how to celebrate Christmas like a German!

First of all, before there’s Christmas, there’s Advent. Advent being the weeks leading up to Christmas, marked by the four Sundays before Christmas Day, the first of which can fall anywhere between 27th November and 3rd December. In the UK, the term Advent appears in the context of Advent Calendars, but outside of church I’ve not heard the term Advent used much (people more commonly seem to refer to most of December as ‘Christmas time’). In Germany, however, Advent is a BIG deal! Many people get together within their families or with friends to celebrate the four Advent Sundays, especially the first one. The first of Advent is also when many people bake their first batch of Christmas cookies. Then you gather round your candle lit Advent wreath (see below) with your freshly baked goods and a nice cuppa for some afternoon tea. 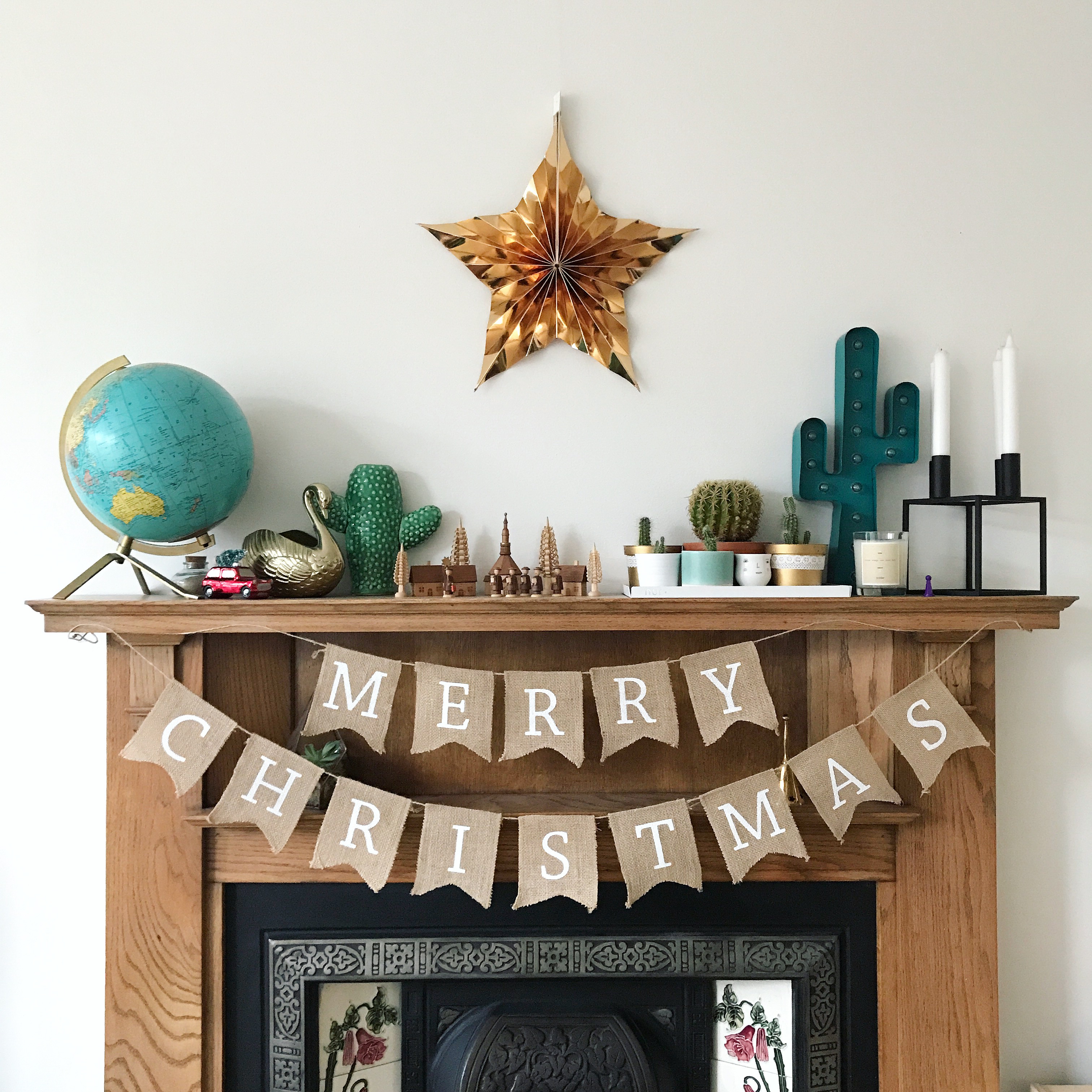 One thing you will find in most German homes in some shape or form, in the run up to Christmas, is an Advent wreath. Not the kind that hangs on your door, but one that sits on a table and is decorated with four candles. On the first Advent Sunday you light one candle, on the second Sunday two candles and so on until all four candles are lit. And then on Christmas Eve you light you tree. Traditionally, the Advent wreaths are made of evergreen but these days you can find all kinds of modern alternatives, some even with just four candles displayed e.g. on a tray or in candle holders. Allegedly, the concept of Advent wreaths originated among German Lutherans in the 16th Century. 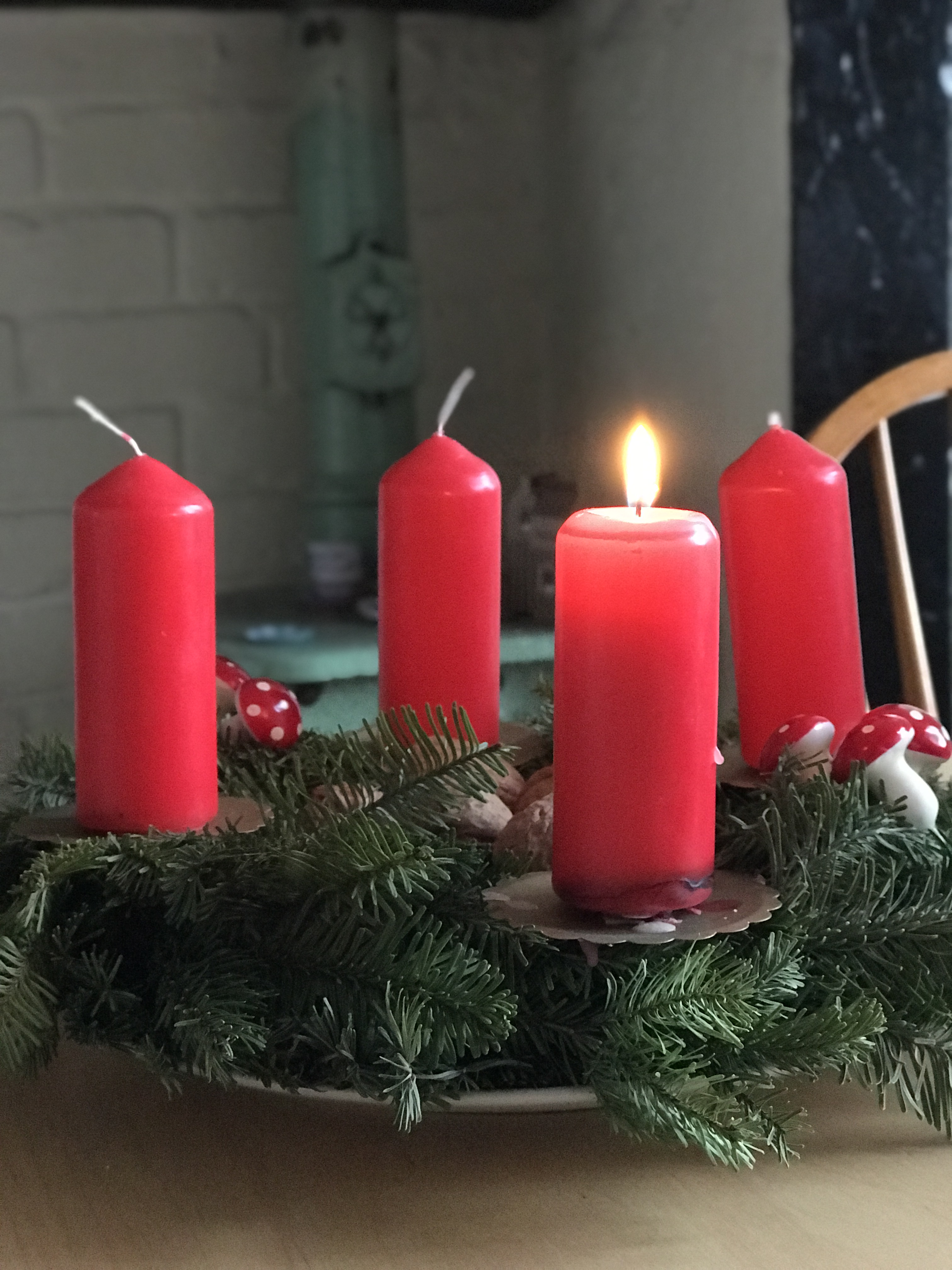 Another thing you’ll definitely need, to do Christmas like a German, is an Advent Calendar. They are of course not unique to Germany, but they did originate there. Apparently, Advent Calendars were also first used by German Lutherans, this time in the 19th and 20th centuries. These days, you can get calendars filled with pretty much anything in the UK, but when I went to school in Edinburgh in the 80s, my sister and I, and a handful of other kids in the school with German parents, were the only ones with calendars filled with little gifts each day. Much to the envy of all our friends and classmates, who had to make do with calendars filled with cheap little chocolates. We had reusable calendars, which my mum hand made for us and refilled every year, but it’s a popular past time in Germany still today to craft a new Advent calendar each year. I know many German who do this, not only for their children but also for their partners or even friends. 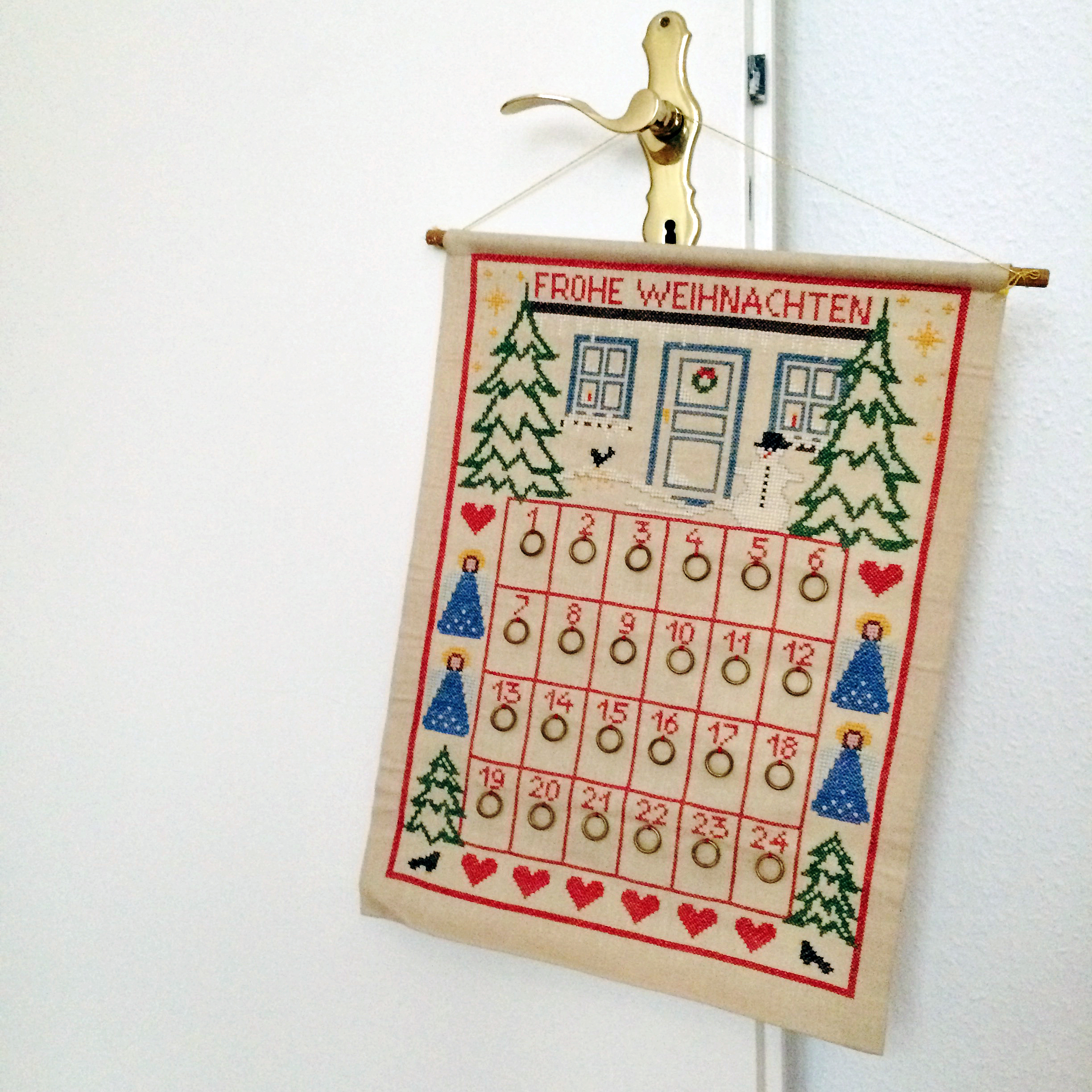 I already mentioned baking Christmas cookies above, and this is a much loved ritual for German Christmas. I read this week that apparently a whopping 77% of Germans bake Christmas cookies! In the run up to Christmas, magazines are full of Christmas cookie supplements, and although everyone loves trying out new recipes, the most popular ones are the evergreens such as Lebkuchen, Spekulatius, Vanillekipferln and Cinnamon Stars. And, of course, on you only bake these cookies at Christmas time – not during the rest of the year! 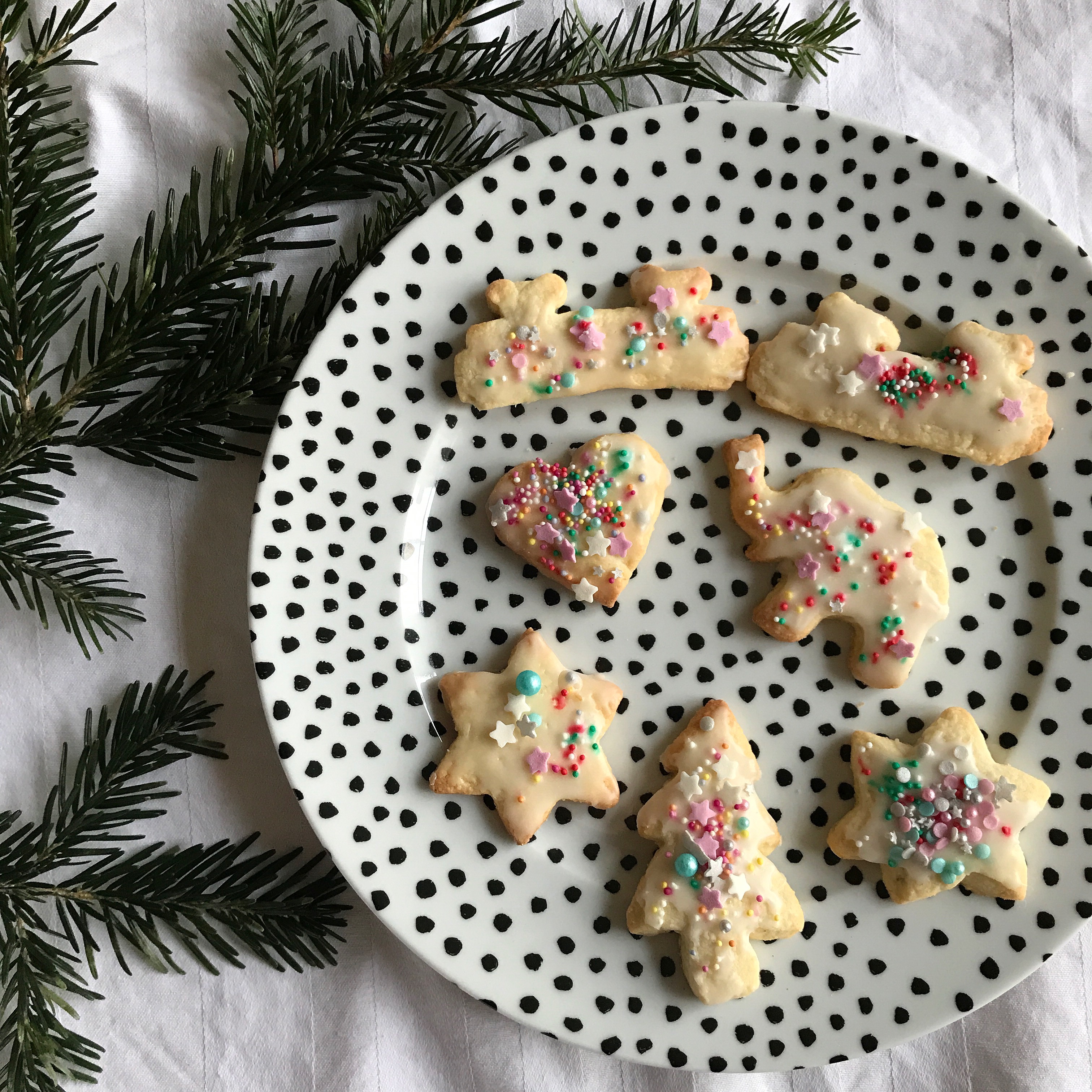 St Barbara’s Day is one of the lesser known German Christmas customs, and sadly one that seems to be dying out. But it is one of my favourites. Barbara was the daughter of a rich merchant in Asia Minor, who died a martyr’s death in the 4th century AD. On the 4th December, her feast day in the Western Christian church, people put cut branches of cherry or other fruit trees, such as apple or plum, in vases of water in a warm place inside their home. So-called ‘Barbara Zweige’ (Barbara branches). It is thought to be a symbol of good luck for the next year if the buds on your branches blossom by Christmas Eve. 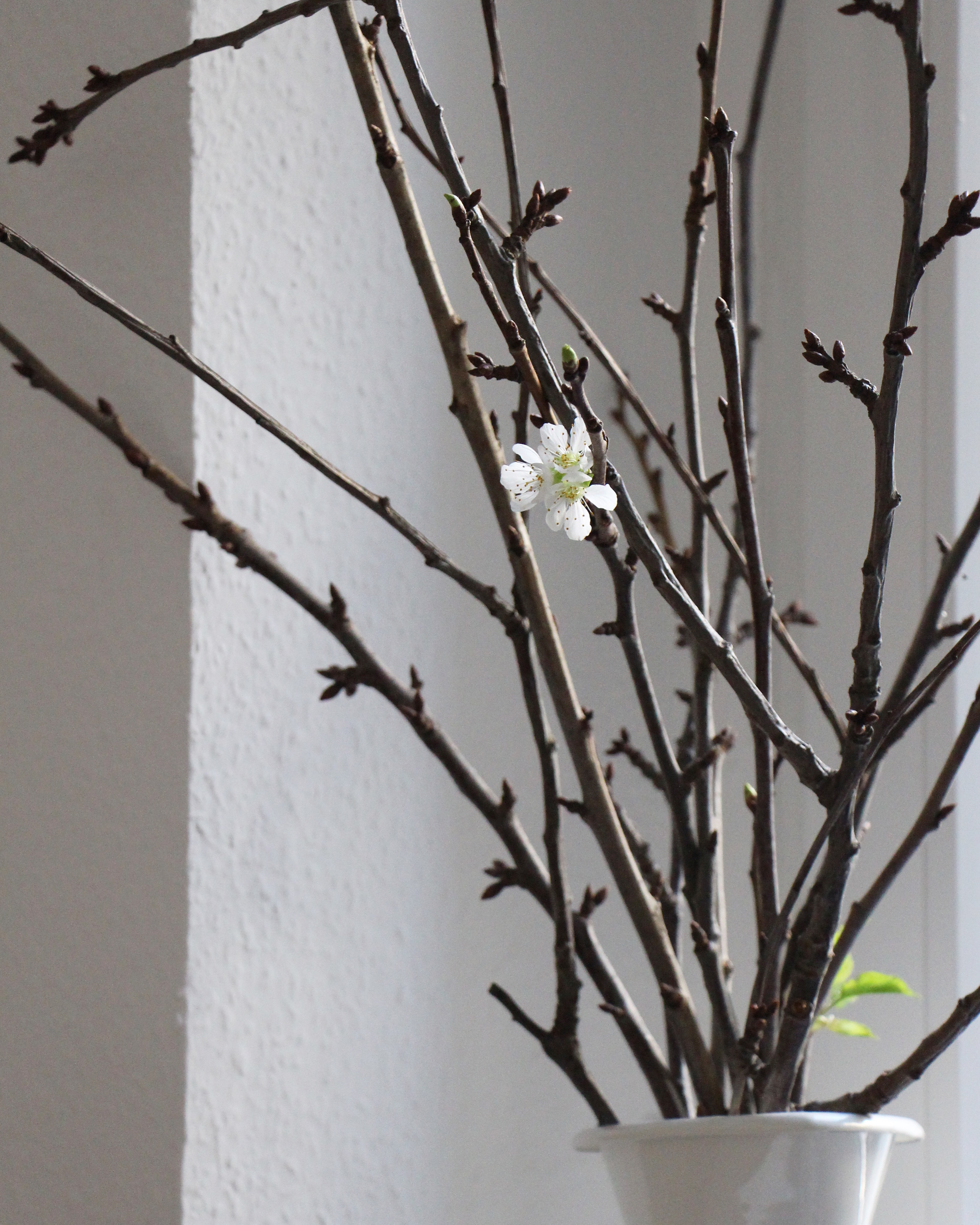 Put Your Shoes Out for St Nicholas

Another Saint that is celebrated in German Christmas, is St Nicholas. You will recognise him, of course, as the legendary saint that lends his name to Santa Claus. In Germany, however, we don’t hang stockings up for Santa Claus on Christmas Eve. Instead, children put their shoes out on the night of 5th December, and if they have been good St Nicholas will come and fill them with treats! Sound familiar? But if you’ve been naughty, you might find rocks or a rod in your shoe instead! On St Nicholas Day, the 6th December, many nurseries also get a visit from the man himself. 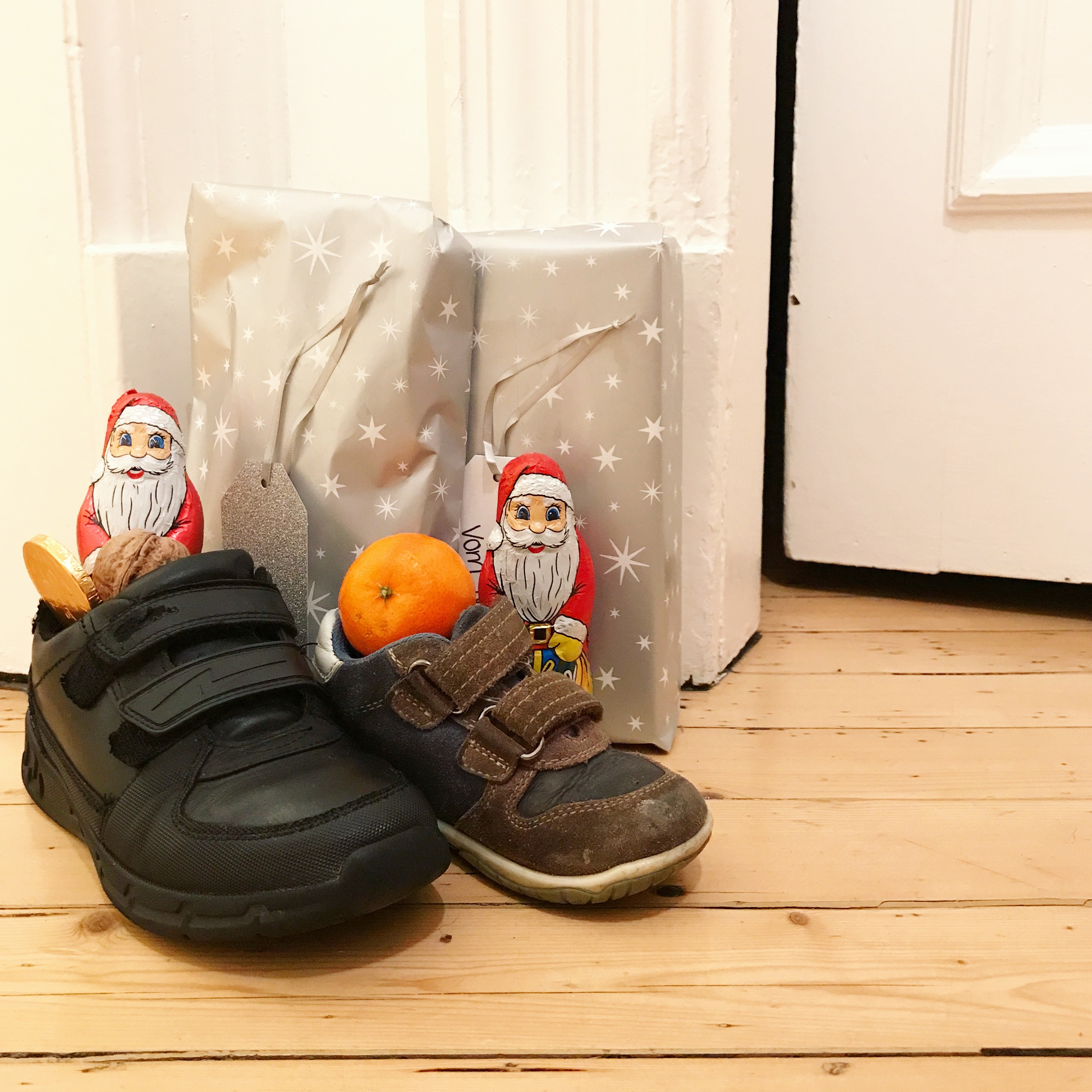 Get a Real Christmas Tree

I already briefly alluded to Christmas trees above. The custom of bringing decorated evergreen trees in to your home dates back to medieval times and allegedly originated from the present-day Estonia, Latvia and – you’ve guessed it – Germany, where the Lutherans popularised it in the 16th Century. The German Protestant reformer Martin Luther is credited with first adding lit candles to an evergreen tree. George III’s German-born wife Charlotte introduced the custom to Britain in 1800, and Queen Victoria’s German husband Prince Albert popularised the custom even more. For a true German-style experience, you’ll need to get yourself a real tree – with real candles! Oh, and to be truly authentic you shouldn’t put it up until Christmas Eve. 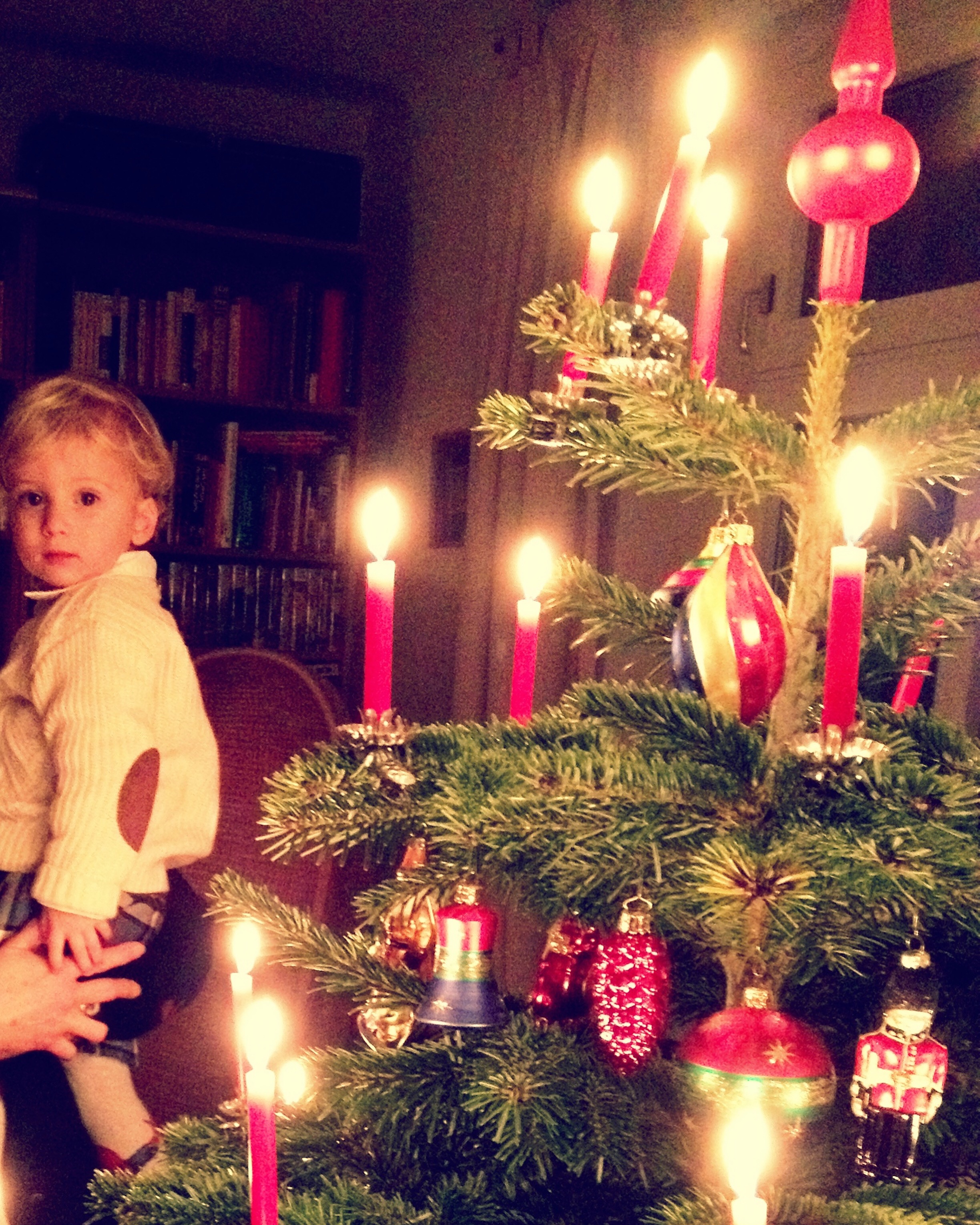 Open Your Presents on Christmas Eve

Speaking of Christmas Eve, this is the main event in German Christmas. Germans don’t need Christmas Eve boxes, because they just open all their presents on Christmas Eve! (Though in our house specifically, since we follow both German and British traditions, we do half our presents on Christmas Eve and half on Christmas Day) The question of who delivers the presents on Christmas Eve is complicated, thanks to reformer Martin Luther whom I mentioned above. He disagreed with the veneration of saints, and introduced ‘Christkind’ as a giver of gifts for Protestant children, to replace St Nicholas. It literally translates as ‘Christ Child’ but is envisaged more as a large angel. But later on, some Catholic families adopted the Christkind too, and some Protestant families re-adopted St Nicholas, and to cut a long story short, somehow we have ended up with St Nicholas on the 6th December and either Christkind or the ‘Weihnachtsmann’ (literally ‘Christmas Man’), a mutation of St Nicholas, who come on Christmas Eve. I grew up with Christkind, who was popular in the Western region of Germany my parents are from, whereas when we lived in Berlin Christkind was basically unheard of and the Weihnachtsmann was the flavour of the day. So, just take your pick! 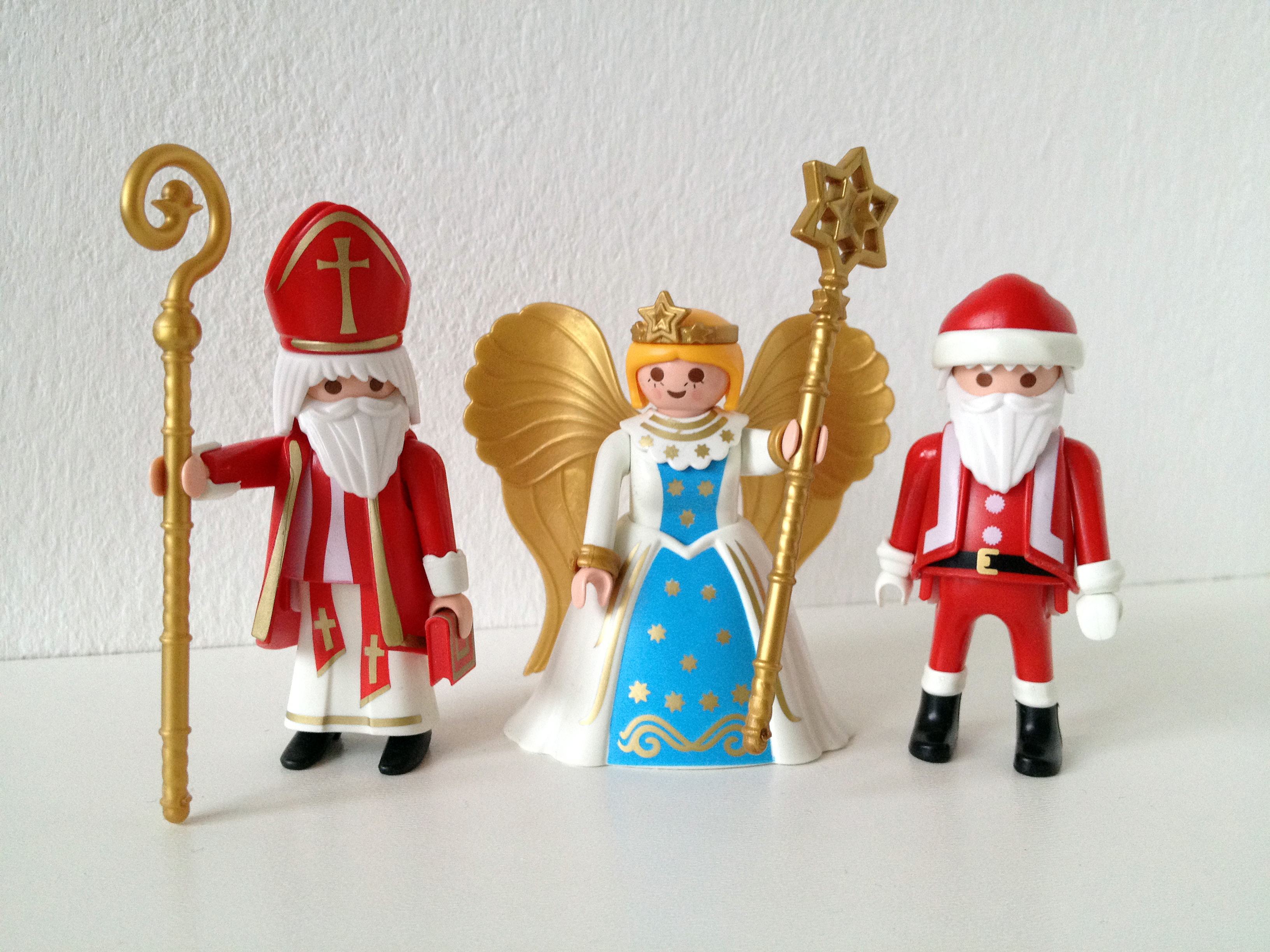 In the UK, people seem to put their Christmas trees up early in December and take them down soon after Christmas Day. In Germany, as mentioned above, it’s customary to put them up on Christmas Eve or at least later on in December (which makes sense if they are real trees, as you want them to last to the main event), and to keep them up until Epiphany, also known as ‘Heiliger Drei Königs Tag’ or in English, ‘Day of the Three Holy Kings’. In many parts of the country children dress up as the three kings and travel from house to house with a star, singing Christmas and Epiphany carols. Originally they received sweets in return for their singing, but nowadays they collect money for charity. On each house in chalk, they write above the door the year and the letters C-M-B, an abbreviation for ‘Christus Mansionem Benedicat’ – Christ, bless this house! We usually celebrate now, by baking crown shaped cookies (one last chance to use the Christmas cookie recipes before they disappear for another year!) 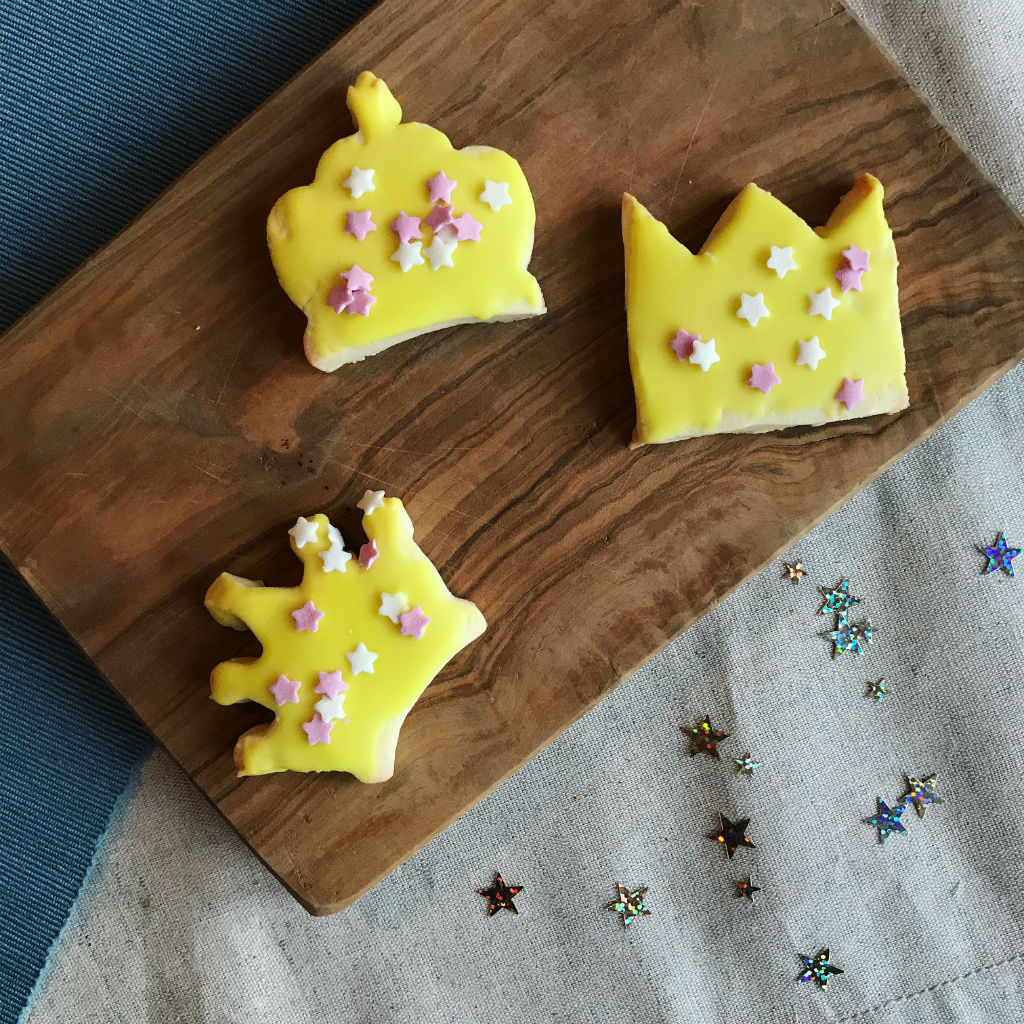 So, that’s how to celebrate the Christmas season German style. Had you heard of all these traditions before or are there some that were new to you?  I would love to hear how you celebrate Christmas!