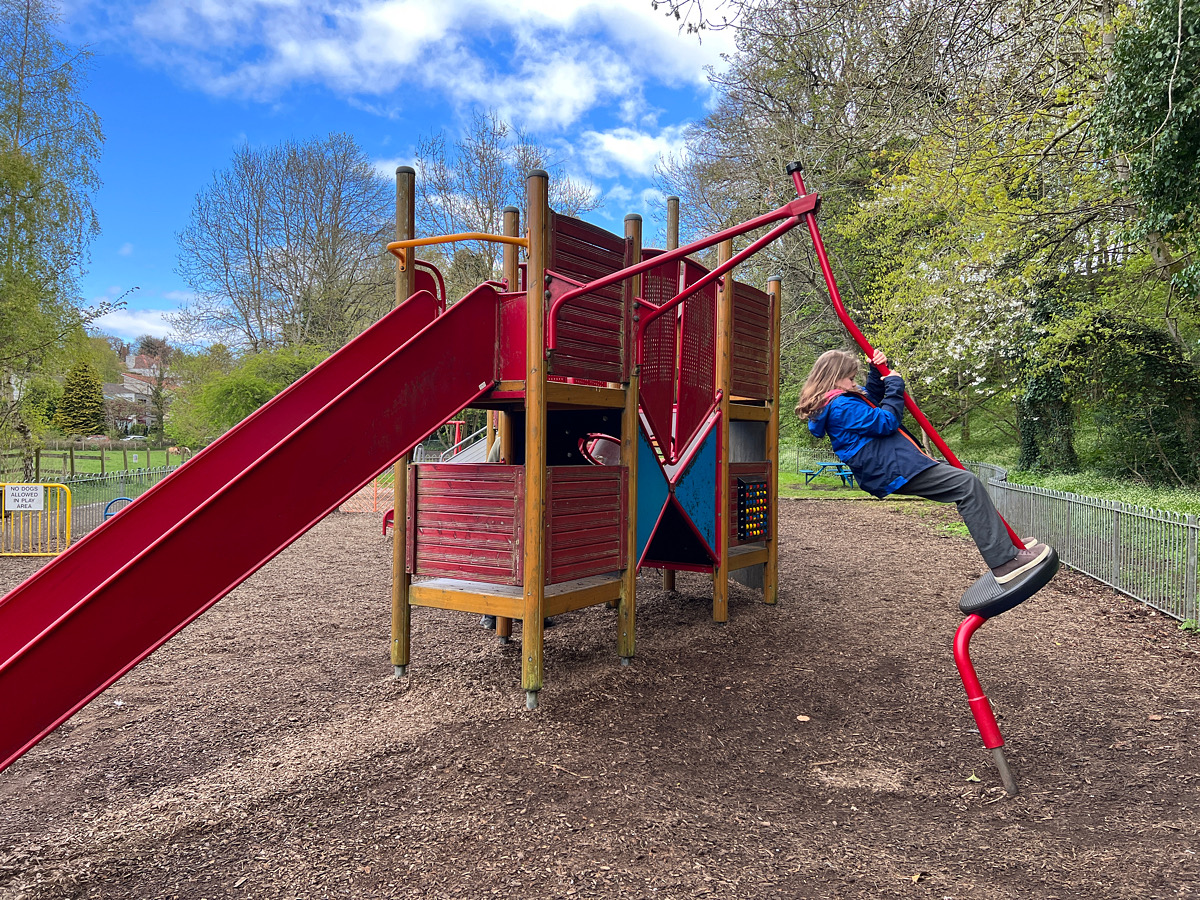 This weekend, we took a hike along the River Almond, which we topped and tailed with two more playground visits. The first playground was is officially called Haugh Park, though I’ve also heard it referred to as Cramond Brig, Cramond Bridge, or Brae Park playground. Google Maps simply has it marked as “playpark by horses”. In case you’re wondering, it’s next to a field that has horses in it.

As soon as we arrived, my 7 year old gave this playground a thumbs up, which he later revised to two thumbs up. It was fairly quiet and tranquil, even after a few more families arrived, being surrounded by fields on one side and trees on the other sides. The trees will offer some shade on hot, sunny days and yes, we do get those in Scotland.

It’s a fenced in playground, with a wood chip ground covering. The central focus is a multi-activity climbing structure, which includes nets, two medium height slides, and a climbing wall. Another nice feature was a seat with a car steering wheel and controls, and some fun extras such as puzzle games and a kaleidoscope/ telescope.

Besides the climbing structure, there was also a set of baby swings but no regular swings, though there was also a bird’s nest swing. As well as the usual park benches you find at playgrounds, there was also a picnic table. And, of course, there’s the ponies in the field across from the playground to say hello to. A definite bonus for animal loving children (though please don’t feed the ponies!)

My 11 year old got bored fairly quickly with this playground, but my 7 year old loved it and wanted to stay longer but we were wanting to start our walk. I’d say it’s definitely worth a trip across town to this playground, as part of a wider trip to the Cramond area. It’s the perfect starting point for a walk along the River Almond Walkway to Cramond Beach, which is exactly what we did. It’s also the closes playground to the nearby Cammo Estate (which we haven’t visited yet) so could also be combined with a visit there.

Haugh Park/ Cramond Bridge playground is located right next to the old Cramond Brig. You can take either the 41 or the 43 bus to get there. If you take the 43, you’ll need to tell the driver how far you are going as it’s a LothianCountry service so they have various prices depending on your destination as it covers 5 zones. The 41 is a regular Lothian Bus and just covers zone 1.

No.43 LothianCountry Bus: The closest stop is Cramond Brig, which is where the map took us to, but if you’re coming from the city centre you then need to cross a super busy road with lots of fast cars. I’d avoid this with kids, and recommend getting off at the stop before, which is Braehead Avenue. Here there are traffic lights to help you safely cross the road. From there it’s just a 3 minute walk to the playground.