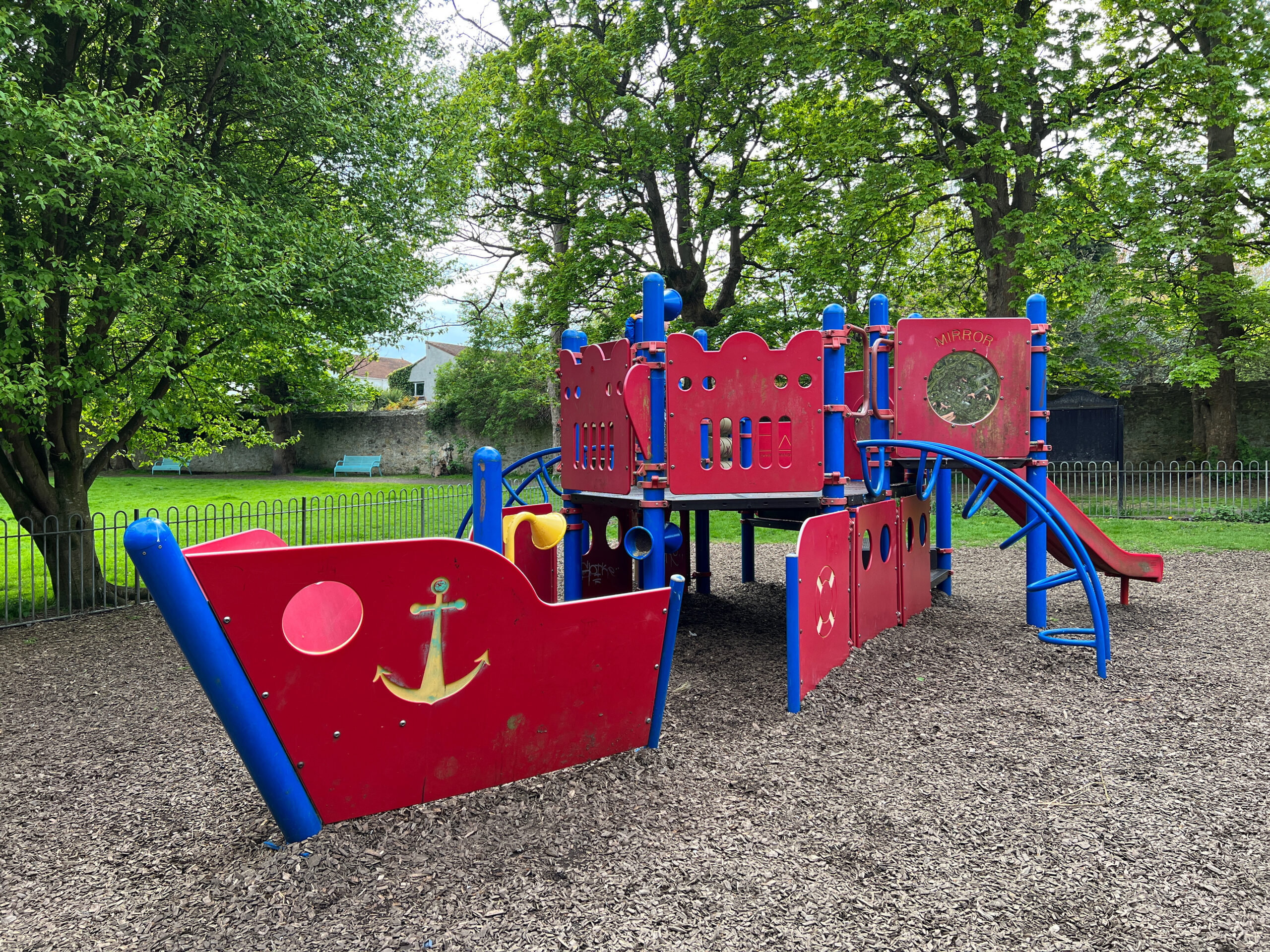 The second playground we visited on our recent trip to Cramond, was at Cramond Walled Garden. It’s a great sheltered spot for a playground, set in the beautiful walled garden adjacent to the Roman Fort remains and Kirk Hall in Cramond.

There are two sections to the playground – a fenced in area for toddlers and juniors, with a ship themed play unit and bird’s nest swing, and then a large grassy area which has more play equipment aimed at older children/ teenagers as well as a goal and basketball hoop. Both sections have plenty of benches, and the fenced in part also includes a picnic table.

Both kids really loved this playground, with something for all ages, and it was really hard trying to drag them away from here to go home. The Gathering Space Cafe in the Kirk Hall ‘next door’ (see above) is also very handy to have close by, though it was closed on this occasion. At the time of writing, their opening times were Tuesday to Saturday, 9am to 3pm, but do check out their Facebook page for up to date times.

Cramond Walled Garden playground is definitely worth a trip across town to, and gets a double thumbs up from both my boys. It’s perfect for combining with a day trip to Cramond for a walk across to Cramond Island at low tide or a play on Cramond beach. There’s also public toilets at the beach front, and an ice cream van on most fair weather days in the warmer months.

This was not the easiest playground to find, as the name implies it’s behind a wall so not one you would spot in plain view in passing. Top tip: do NOT listen to what Google Maps tries to tell you! It led us to someone’s back garden, and even it it hadn’t been a private garden it would still have been a dead end unless you can fly yourself over the wall. There are two entrances to the Walled Garden. If you are coming from Cramond Beach or the River Almond Walkway, the closest entrance is via Kirk Cramond – walk up the path, turn right at the Roman Fort remains, and aim for the Kirk Hall/ Gathering Space Cafe. The entrance to the garden is just past the hall/ cafe.

If you are coming in on the bus, there is a path that leads off Cramond Road North, between Cramond Glebe Road and Brighouse Park Road. Walk down the path, then turn left and you should see a wall with an archway ahead of you.