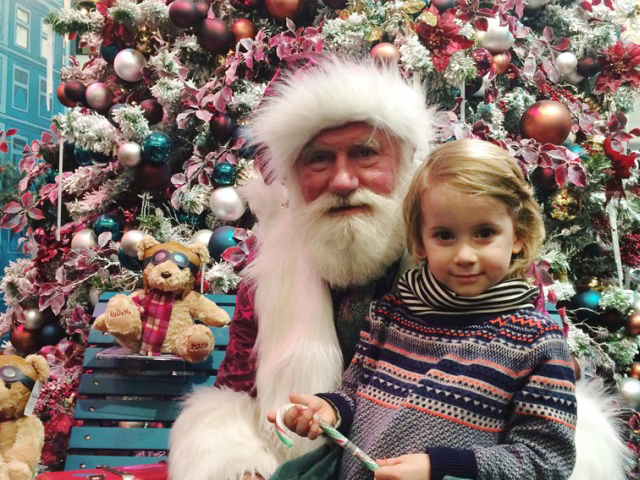 After four years in Berlin, this year we finally managed to make it to KaDeWe to see their Christmas display. At 60,000 square metres of selling space across eight floors, the KaDeWe – short for ‘Kaufhaus des Westens’ (Engl: Department Store of the West) – is the largest department store in continental Europe. Every year, someone would say “you must go and see the Christmas display”, but it was always too much of a hassle to get there on public transport. However, since we moved house, it’s just a 15 minute walk away, so we decided to finally go and see what all the fuss was about. And what can I say? Amazing! Not only the kids stopped and stared with wide open eyes. This year’s theme was ‘A Christmas Journey’, and both the displays and the wares on sale reflected different cities, including New York, London and Paris. It was just so beautiful, and sparkly, and ridiculously sumptuous and over the top. But I loved it! Also, The Boy met his first ever department store Santa – possibly the classiest Santa I have ever seen! (he kept candy canes for the kids in his little red suitcase), and took it in his stride. Mr Fox wasn’t so impressed – the best photo I could get of the two of them was in front of the tree, without Santa, trying to steal his big brother’s newly acquired candy cane. Lol. Anyway, I will leave you with some photographs of the gorgeous display to feast your eyes on, and take this as the opportunity to wish you all very Happy Holidays!!