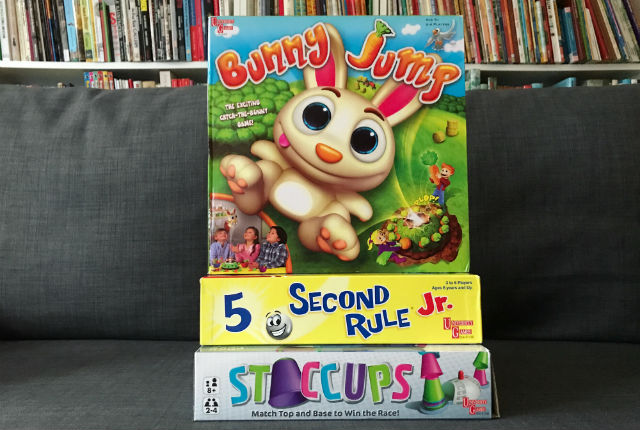 As I have mentioned here on the blog before, I come from a family of board game lovers and we are big board game fans in our house. I was therefore delighted to be given the chance to review a bundle from University Games, who had presented a range of their games at the BlogOn conference I attended last month. Helping me to test them out were my trusty side kicks, Oskar-Bear (aged almost 7) and Mr Fox (aged almost 3). Disclosure: I received this bundle of games free from University Games, in return for an honest review. All photographs, words and opinions are my own. First up is Bunny Jump, which the boys literally jumped on (sorry, no pun intended) when I brought it home from the mail depot. “A bunny! bunny!” So, what’s in the box? In the box, you have a carrot field, a rabbit, 12 carrots, 4 baskets and a spinner. The aim of the game is have collected the most carrots by the end of the game. The game ends, when the rabbit jumps in to the air. The game is for 2-4 players, and we played it with 3 and with 4 people (me with the boys, and then the whole family together). First of all, we had fun setting up the game. The boys ‘planted’ the carrots in the holes around the field, and pushed the bunny down in to the middle. Then everyone chose a colour of basket, and we were good to go. The game play is very straight forward: You spin the spinner, and perform one of three actions: pull out one or two carrots from the field and place them in your basket; miss a turn; or lose one of the carrots from your basket. At any point in the game, any of the carrots being pulled out can trigger the bunny jumping in to the air. Anyone else remember ‘Pop-up Pirate from their youth? It’s like that, but in reverse. This can happen on the first carrot, the last, or anywhere in between, meaning a round can sometimes be super short. Whoever catches the bunny can steal two carrots from another player (though we reduced that to one carrot, as often you’ll only have a couple of carrots by the end of the game, which then ends in tears if they are stolen and you are left with an empty basket). Our verdict: The boys really loved this game, and we played a couple of rounds in a row because it is over fairly quickly, especially if the bunny jumps out early on. But since there are only 12 carrots in total, the game doesn’t last that much longer even if he jumps out on the last carrot, especially when you are playing with three or four people. The game is billed at 5+, but my older boy was the first to lose interest and it was actually the younger one who loved this game the most, so I would recommend it for 3+. He grasped the rules really quickly too. All in all, I’d say this is a great little boredom buster, perfect for filling some time e.g. between homework and dinner, or as part of a family games night.

‘Bunny Jump’ is available to buy from various toy retailers or from Amazon (affiliate link). The second game we tried out, was 5 Second Rule Jr. This one is for 3 to 6 players, so we tested it with our older boy playing with mummy and daddy. It billed for ages 6+ and I’d say in this case the age recommendation was spot on, as it was too complicated for our younger boy (though that didn’t stop him shouting in random answers or trying to steal the timer). So what’s in the box? A game board, 6 playing pieces, 200 double sided cards (with 400 questions in total), and a timer. The timer makes a fun squeaky noise, hence the little one trying to steal it. The aim of the game, is to be the first player to reach the finish line. You do so, by answering question before the timer runs out.

Setting up the game was very straight forward, you place the playing pieces at the start of the board, and place the cards and timer within reach. Game play: A round starts by a question being read out, and the timer being turned over. The player whose turn it is then needs to answer within 5 seconds, before the timer runs out. If they success, they get to advance one space on the board. The next player then has 5 seconds to answer the same question, but they are not allowed to repeat any answers already given. Then it’s the next player’s turn, and so on, until someone can’t answer within 5 seconds and they don’t get to move forwards on the board. Play then continues with a new question for the next player. The questions all take the form of “Name 3…”, for example, “Name 3 things that float” or “Name 3 superheroes”. If you are playing with different ages, you can also give the younger players an advantage by only having to name 2 things, which is what we did. There are also a couple of bonus squares on the board. When you reach those, you get an extra 5 seconds to answer. Our verdict: I felt that this game didn’t work so well with mixed ages, as even with Oskar only having to name 2 things instead of 3, it was always one of the grown ups that won the game. I think it might work better him playing it with kids his own age, and them all being evenly matched. Despite that, he said this was his favourite game out of the three we tested! He also likes to bring a few cards along to the dinner table and ask us questions over dinner. It’s definitely been a great way of expanding his reading. The rules also suggest playing in teams, so next time we have one of the grandparents visiting, we might try that out and Oskar can be on a team with one of the grown ups to even out the chances a little.

‘5 Second Rule Jr.’ is available to buy from various toy retailers or from Amazon (affiliate link). The final game we tested, was Staccups. This was a huge success at BlogOn! I almost didn’t put my name down to test this, as it’s billed at 8+, but the lovely man talking me through the different University Games said a 7 year old would easily be able to play it too, and he was right. What’s in the box? One stand, and 32 cups. Before you play it for the first time, you need to assemble the cup tops and bases, but there is a diagram on the back of the box showing you exactly what combinations they need to be. The aim of the game, is to be the first player to stack all their cups. Game play: The cups get evenly divided between players, with the colours also divided equally. Players have their cups in 4 or 5 stacks in front of them, depending on how many people you are playing with. We’ve only played it with two so far (Oskar against either mummy or daddy), but you can also play with three or four people. To start, you press the button on the middle of the stand, to give you the start colours for each side. Players then need to stack up their cups as quickly as possible, using either side of the stand. The base colour of a cup must match the top of the cup below. You can only use the cups from the top of the stacks in front of you, but if you use up one of them, you can split another stack to make the same number of stacks again that you started with. If none of your cups match, you need to wait until you can make your next move. If neither player can make a move, you press the button on the stand again and play continues with those colours. The first player to stack all their cups wins. Our verdict: This is a super fun, fast paced game to play. It was my favourite out of the three. So far, it’s mostly the grown ups that are winning, but you can see Oskar getting better and better at it, the more often we play. It’s great for developing his hand-eye-coordination. Like Bunny Jump, it’s another great little boredom buster, though not one for the whole family as the little one is still a bit too young for it – though he does enjoy stacking up the cups!

‘Staccups’ is available to buy from various toy retailers or from Amazon (affiliate link). So, what do you think? Do you like the sound of any of these games? Which one would be your favourite?