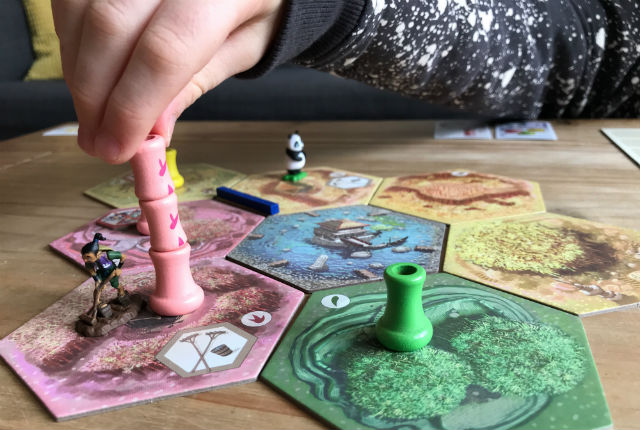 It’s time for this month’s game review for the Asmodee UK Blogger Board Game Club, whom we are currently working with. Asmodee UK is an established distributor of toys and games, and the Board Game Club works with bloggers by providing a free game each month in return for an honest review. The game we are reviewing this month is Takenoko. 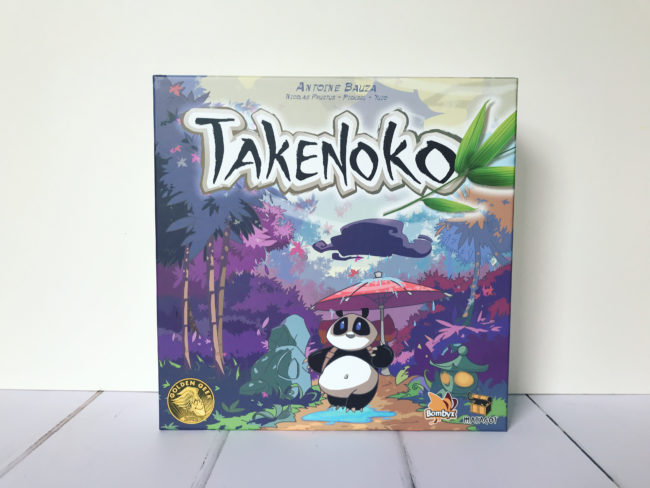 I’m going to be perfectly honest here, and admit I chose this game firstly because it is set in Japan (which, as you may know, we love) and secondly because it looked so beautiful. Thankfully, the game did not disappoint and is great to play too, quickly becoming a family favourite. 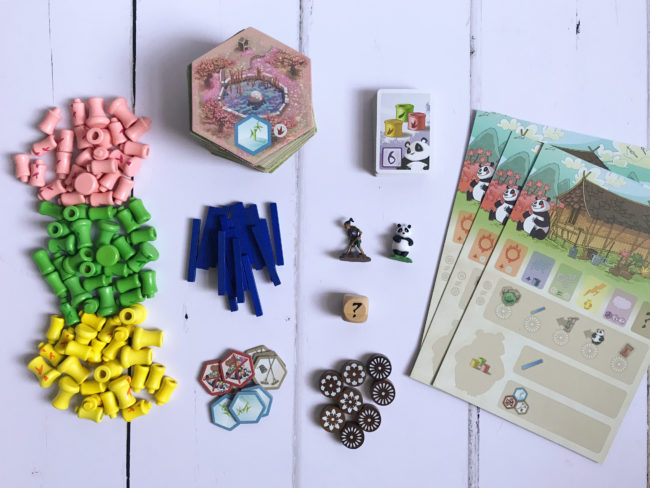 This game comes with a LOT of bits and pieces, which may seem a bit daunting at first. But I promise you, it’s not as complicated as it looks at first glance. Yes, it does take a bit longer than other games to figure out and remember what everything is for, but once you get the hang of it, it really starts to flow. 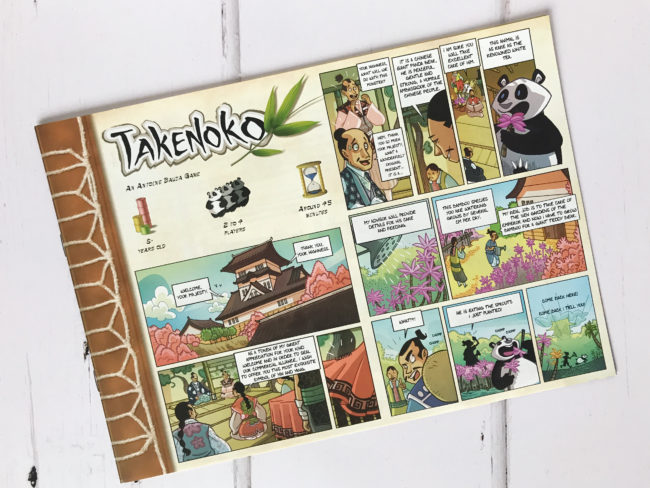 The back story of the game is that long, long ago, the Emperor of China gave the Emperor of Japan a Giant Panda as a peace offering. You have been appointed to care for the Panda and to tend to the Emperor’s bamboo garden, growing and cultivating plots to grow bamboo for the Panda to eat. In case you are wondering about the game’s name, Takenoko literally means ‘Bamboo Sprout’ in Japanese.

The winner is the player who has scored the most points by the end of the game. You score points by completing objectives.

Elements of the Game 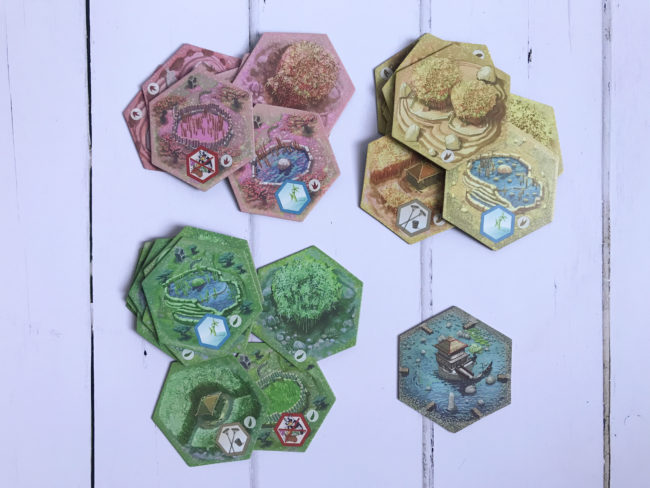 PLOTS: The large hexagonal tiles are the ‘plots’ on which the bamboo grows. They come in three colours – green, yellow, and pink – plus one special ‘pond’ tile. During the course of the game, you use these tiles to build up the board. The pond tile starts you off.

BAMBOO: The wooden bamboo pieces also come in green, yellow and pink. You stack them up on the corresponding plot tiles as the game progresses. 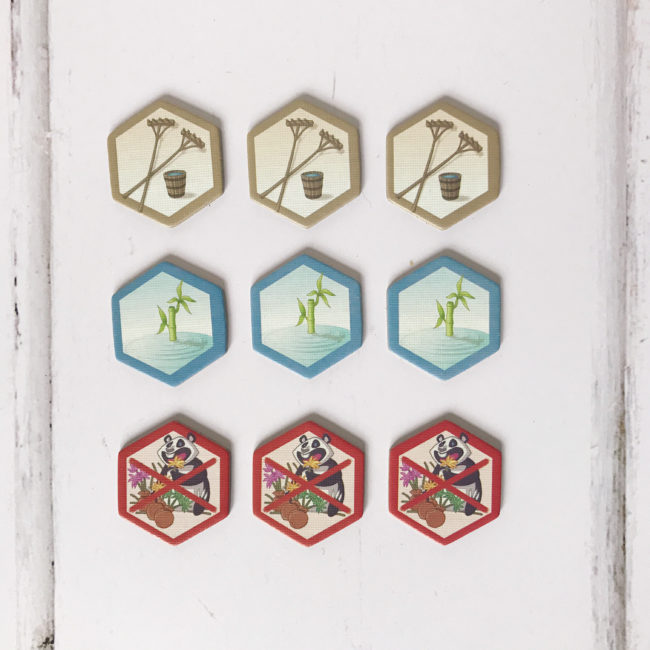 IMPROVEMENTS: So called ‘improvements’ help the bamboo to grow better. Some plots already have improvements built in to them, for others you can add the improvement chips.

GARDENER & PANDA: The Gardener and Panda playing pieces move around the board, one of them growing the bamboo and the other eating it!

WEATHER DIE: The weather die gives players further options or actions to carry out, depending on what you roll. 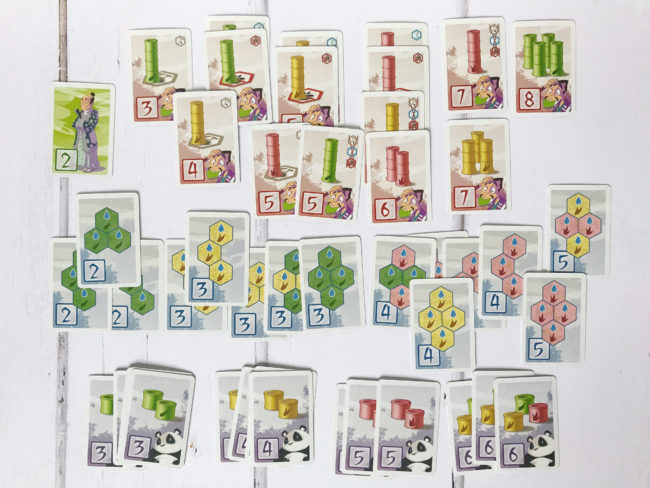 OBJECTIVES: The objective cards are how you collect points. For every objective fulfilled, you earn the number of points indicated on the card. To fulfil objectives you need to lay plots, grow bamboo, or ‘eat’ bamboo in specific configurations.

EMPEROR CARD: There is also one Emperor card (see top left in the photo above) which gains the player to trigger the final round of the game some extra points. 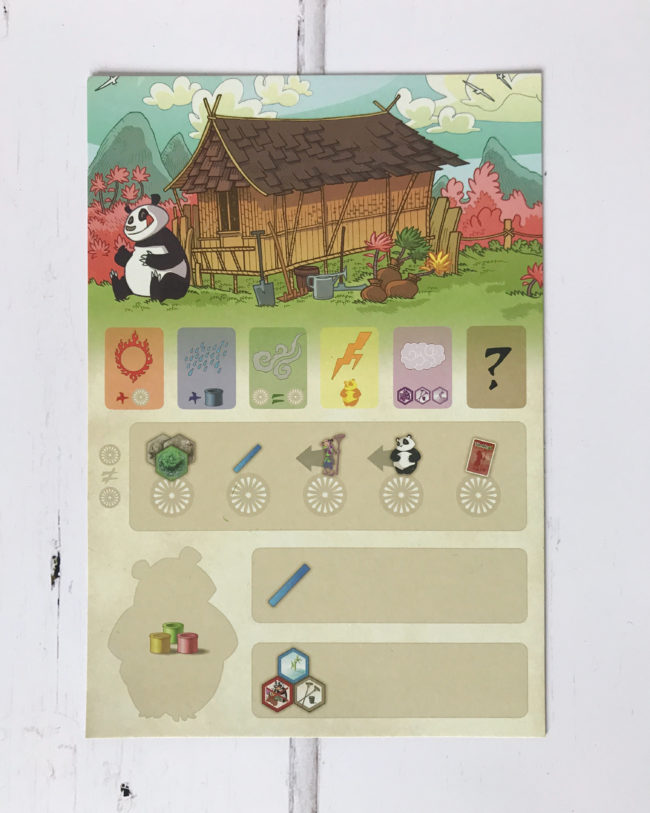 INDIVIDUAL BOARDS: As well as the central board built out of the hexagonal plot tiles, each player also has an individual board to keep track of their moves and resources.

ACTION CHIPS: The small round wooden discs are placed on your individual board to indicate which actions you choose to take on your turn.

Uff, that was a lot to take in! Let’s move on to getting ready to play. Before you start playing, you need to set up all your bits and pieces.

Here’s our set up, ready to play! 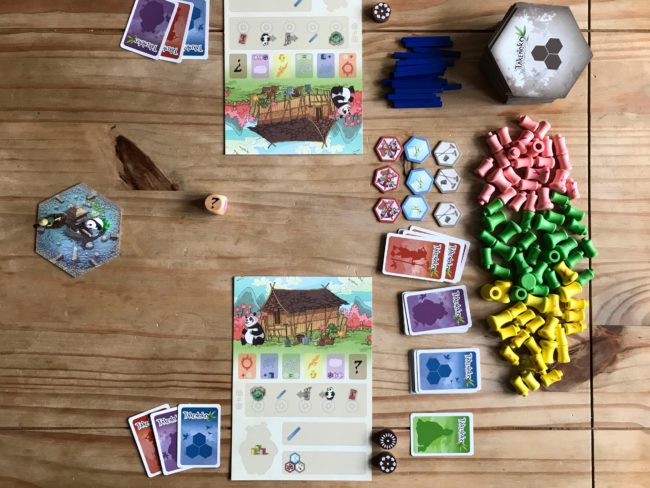 I don’t want to get bogged down in the minute details of the rules, so I am going to simply a little to give you a feel for what it’s like to play the game. When it is your turn, you have to chose two out of five possible actions to take. Your options are 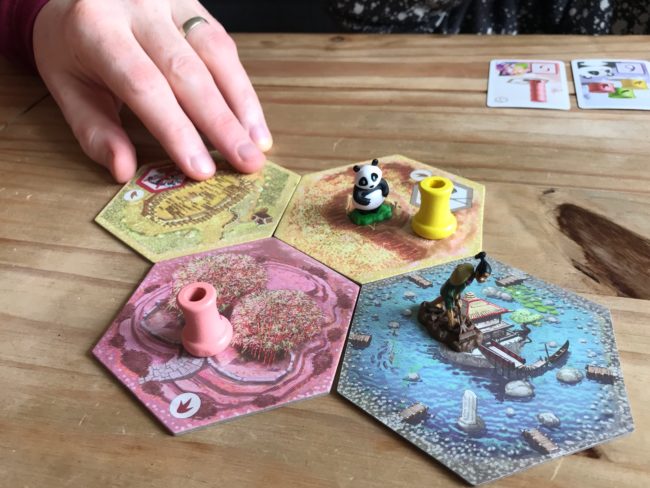 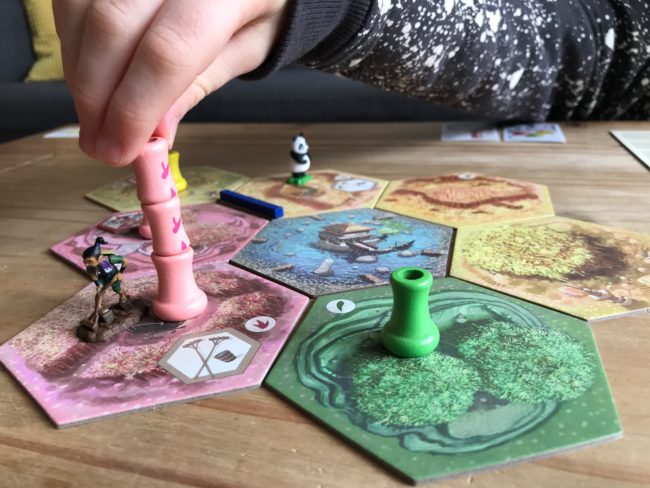 Rolling the weather die will also give you an additional action to carry out. The luck of the die will determine what that is. The rules suggest playing your first game without the weather die, to give you a chance to familiarise yourself with all the other game mechanisms first. We followed this suggestion, and did indeed find it useful for getting to grips with things, though it also made the game less interesting. 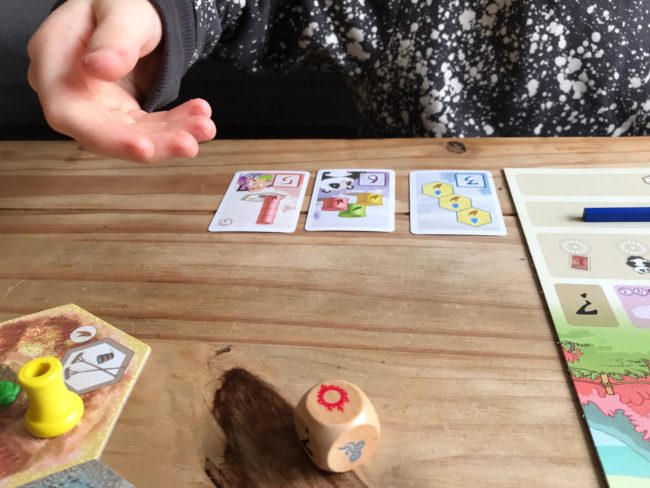 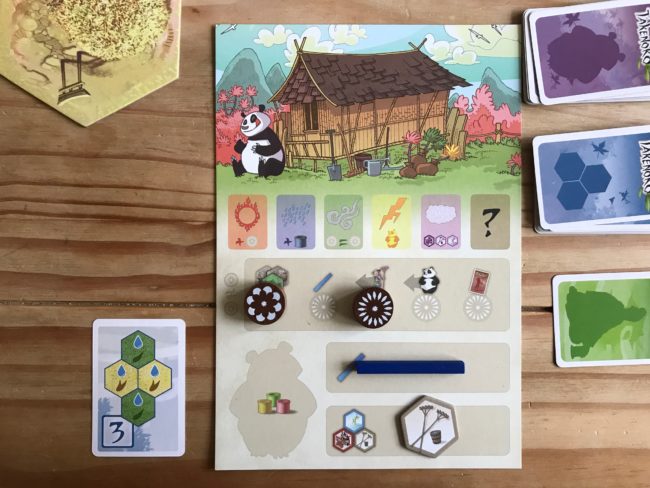 The row of six symbols at the top is a reminder of the weather die actions. Below that are the five actions you can choose from on your turn, with the two action chips indicating the actions chosen. Below that on the left is where you collect any bamboo pieces the Panda has ‘eaten’ (none on this card), and to the right of that you have two spaces to store your irrigation channels and improvement chips until you need them. 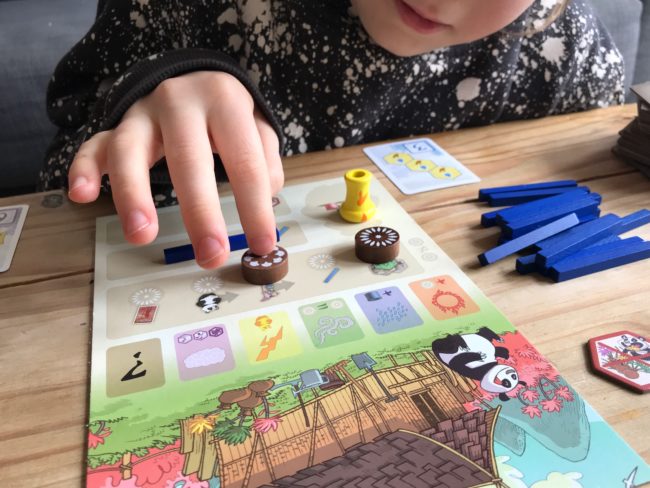 As you place plots, and ‘grow’ or ‘eat’ bamboo, you will at some point fulfil the configurations on your objective cards. To complete the objective, place the relevant card face up in front of you. You can do this at any point during your turn, and you can complete several objectives during the same turn. 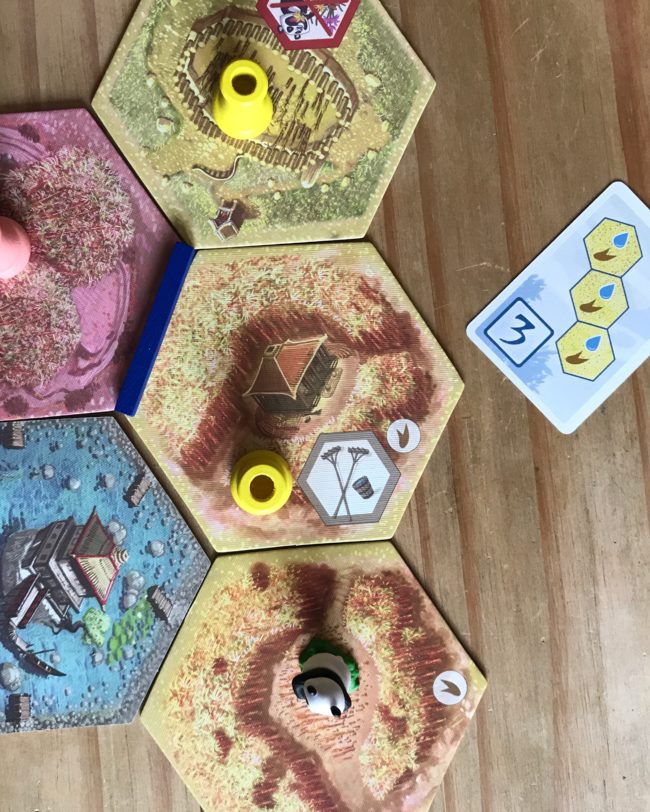 The final round of a game is triggered by the first player to complete a certain number of objectives (the number varies depending on the number of players). That player gets the bonus Emperor card, and everyone then gets a final turn to complete any other possible objectives, after which the scores are added up. The player with the highest score wins.

My husband and I played this game with our 9 year old, and we all loved it! Various elements of it remind me a little of both Catan and Ticket to Ride, which we also love. There’s a degree of thinking and strategy involved, but not too much to make it overly complicated or leave you with decision making paralysis. Amazon has this game listed as 13+ but the box itself actually says 8+ which I think is more accurate. Our 9 year old definitely  did not have any problems grasping the rules. We’ve played it a few times, and he always wins or comes second. I think it’s a perfect game for kids in that ‘in between’ stage to progress on to more grown up games. As for the beautiful design of the game, which first led me to choose it – it certainly makes the game play even more enjoyable! I can honestly say that Takenoko is a game I would recommend without hesitation. 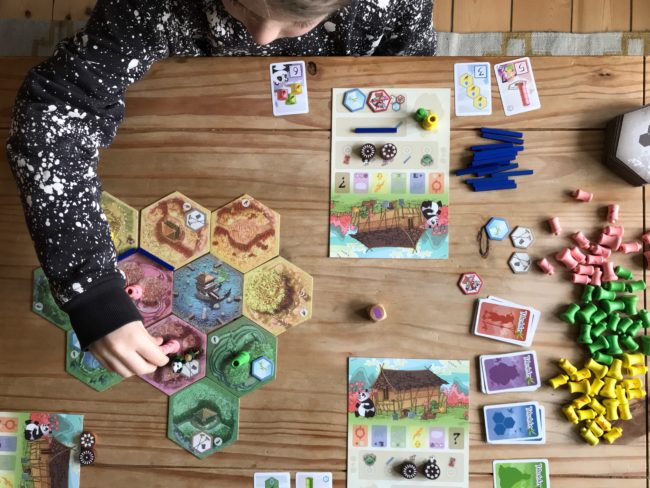 Takenoko is available to buy from Amazon (affiliate link).