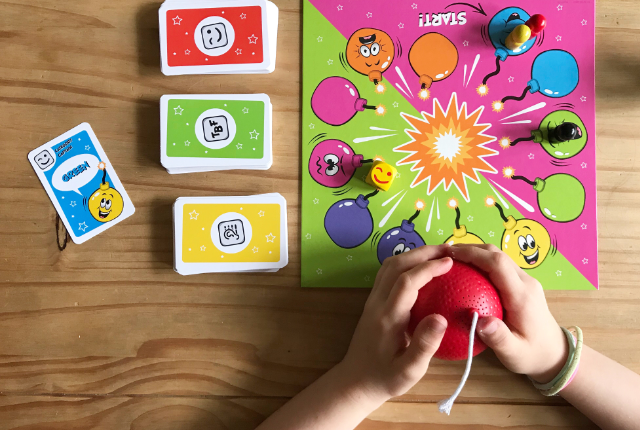 Review: Pass the Bomb! The Big One [AD]

Today we have another game review to share with you, from the bundle of games we received from Gibsons a couple of weeks ago. This time we are reviewing Pass the Bomb! The Big One. 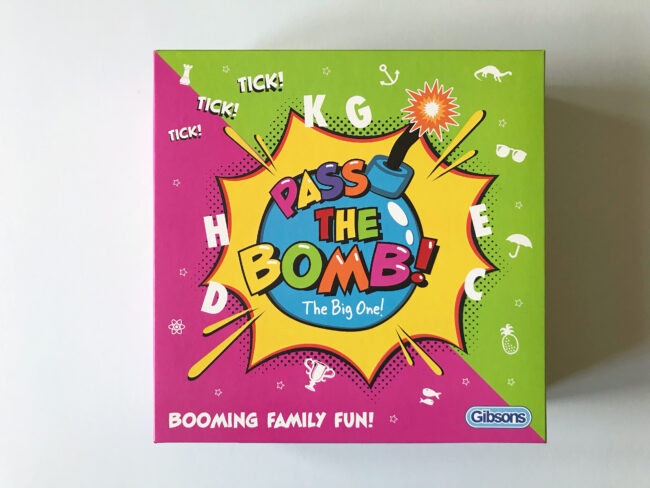 Disclosure: We were sent a free copy of Pass the Bomb! The Big One for review. All opinions are our own.

In the box, you will find: 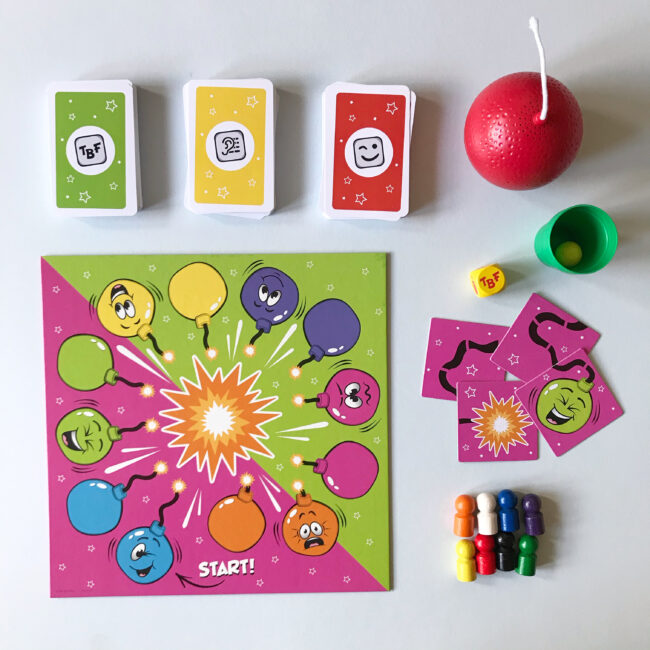 Before you play the game for the first time, you need to insert two AAA batteries (not included) in to the ‘bomb’ timer. Then place the game board in the centre of the table. Shuffle the three sets of cards and place them in three piles at the side of the board, along with the puzzle tiles and the cup and ball. Place a playing piece for each player on ‘start’ on the game board. The player to go first gets the die and the ‘bomb’. 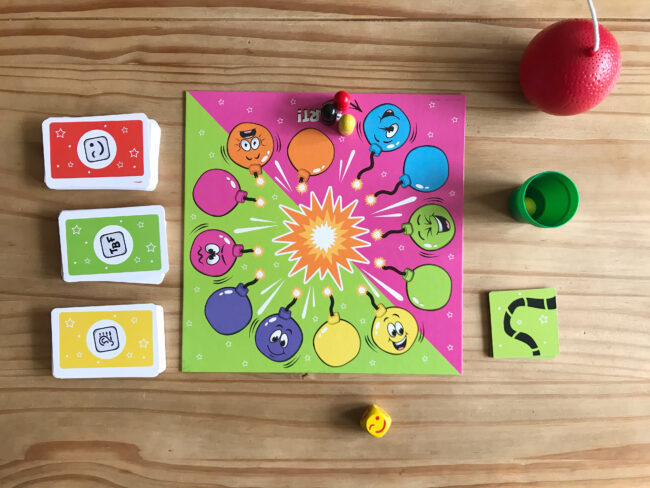 During the game, players complete a task in each round, either a dexterity task or a word task. The ‘bomb’ gets passed around, and whoever is holding it loses that round and moves forward on the board. The aim is to be the last player to reach the ‘explosion’ in the middle of the board and thus win the game.

The player whose turn it is rolls the die. The picture on the die determines which task you have to complete in that round. There are two dexterity tasks, three word tasks, and one ‘wild card’ which lets you choose which of the five tasks you want to do. 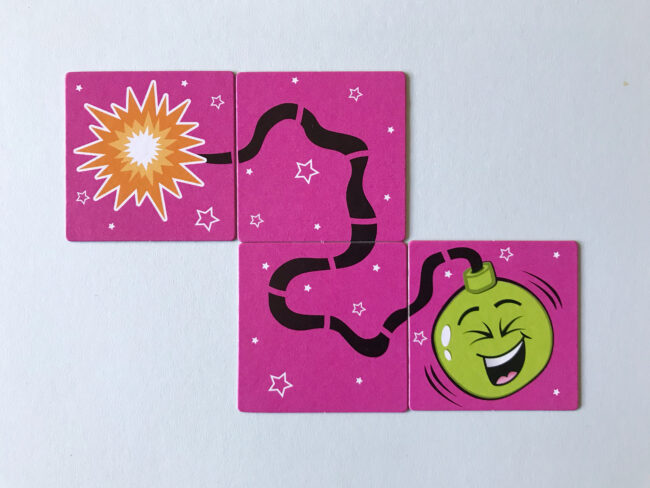 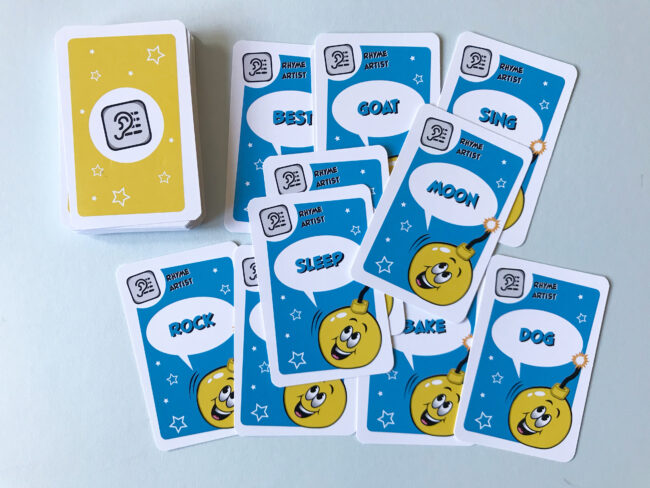 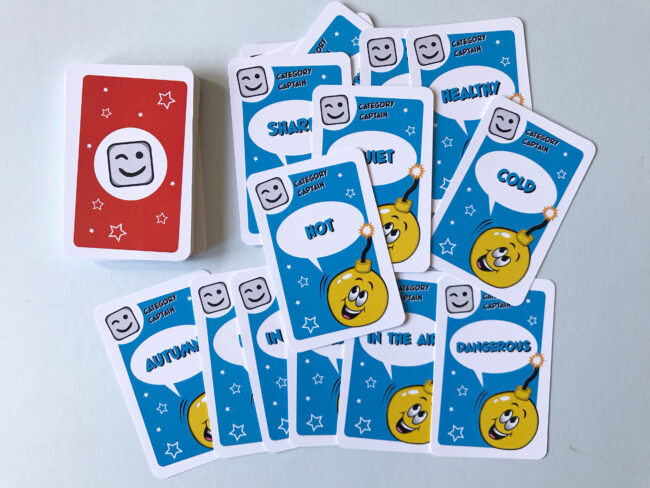 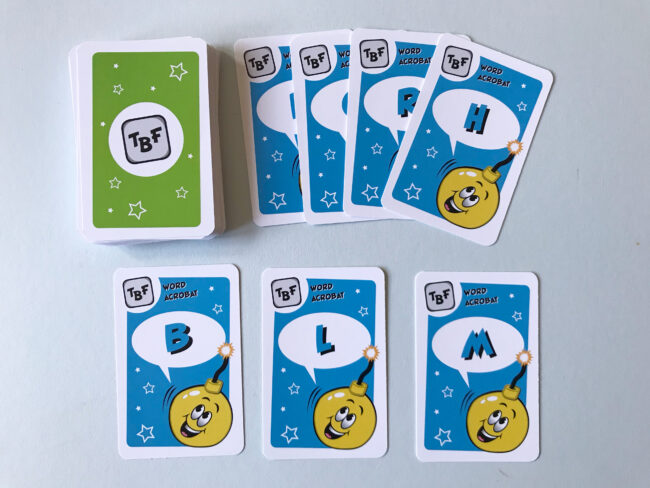 The player who rolled the die starts the ‘bomb’ by pressing the button, and goes first in the task. When they complete the task, they pass on the ‘bomb’ to the next player, who is next to complete the task, and so on. Whoever is holding the ‘bomb’ when the timer goes off (i.e. the bomb ‘detonates’) loses that round and has to move their playing piece one space forward on the board. The timer lasts between 10 seconds and 60 seconds, so you cannot predict when the ‘bomb’ will go off, which adds to the excitement of the game. When a player reaches the ‘explosion’ in the middle of the board, the game ends. Whoever is furthest way from the middle, wins the game. 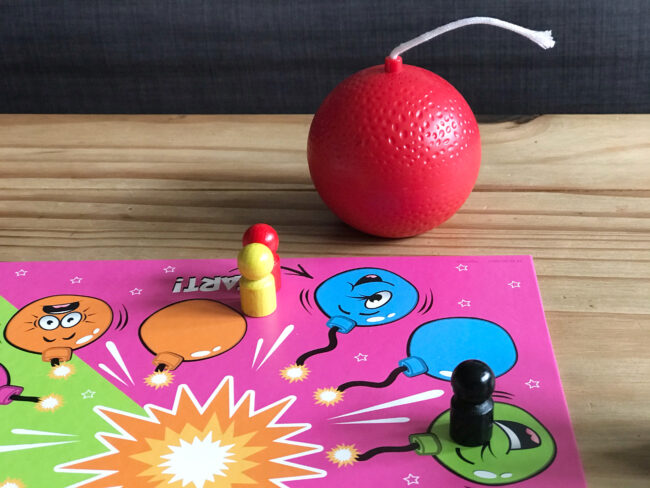 For the dexterity tasks, you complete the task and then pass on the puzzle or the cup and ball to the next player. The ‘bomb’ stays in the middle of the table. For the word tasks, you hold the ‘bomb’ in your hands when it’s your turn to complete the task, and then pass the ‘bomb’ on to the next player. Knowing that it can go off any minute in your hands, while you are trying to think of an answer, can be quite nerve wracking!

This is quite a nerve wracking but fun game. Being under pressure to think of an answer can really make your mind go blank! We all liked the word tasks best, and when the ‘wild card’ choice came up everyone always chose one of the word tasks, with ‘Category Captain’ being the clear favourite. The word tasks are great for developing literacy skills, and you can adapt the Word Acrobat task for different ages, so when we played it I had to find words with all three letters, my 9 year old had to find words with two of the letters, and my 5 year old only had to match one of the letters, since he is only just learning to read. 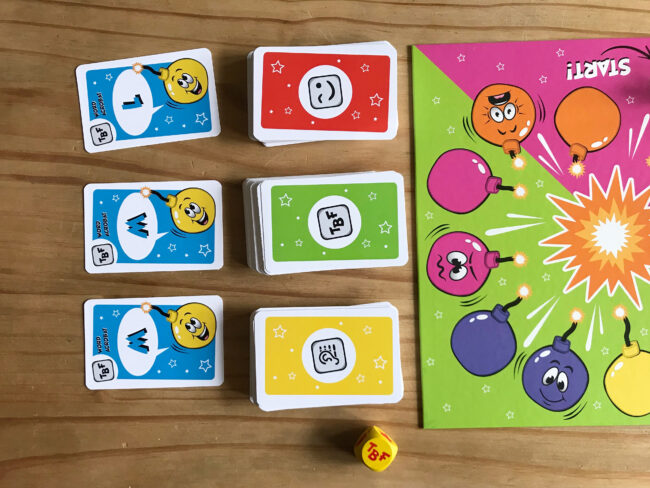 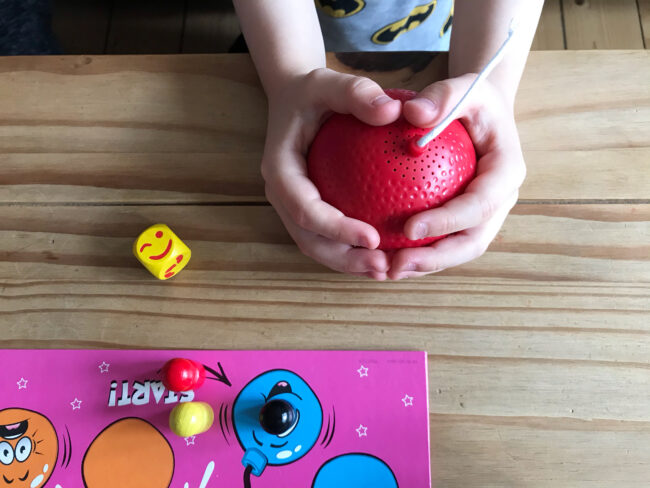 The dexterity tasks weren’t quite as popular, and my main quibble with them is that the wooden ball doesn’t really bounce, making that task really difficult and frustrating to complete. Most of the time the player to go first would still be trying their luck when the timer was up. I understand that the task shouldn’t be too easy, but if it’s too hard it stops being enjoyable so perhaps changing the material of the ball for future editions of the game could be a consideration. But we just adapted the game and changed it so that Bounce Boss was also a ‘wild card’ choice when it came up on the die. 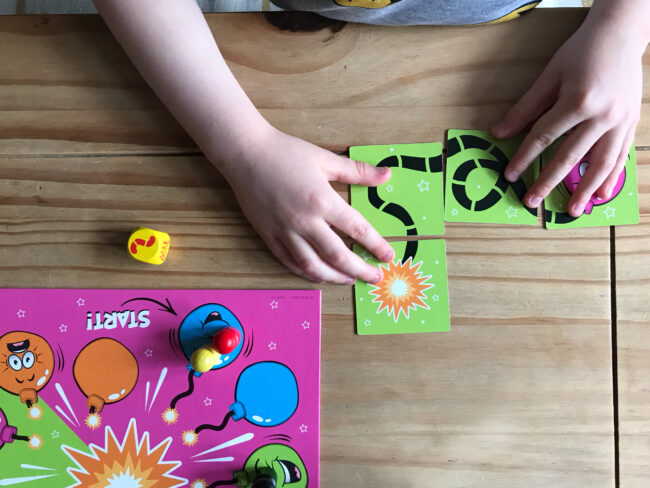 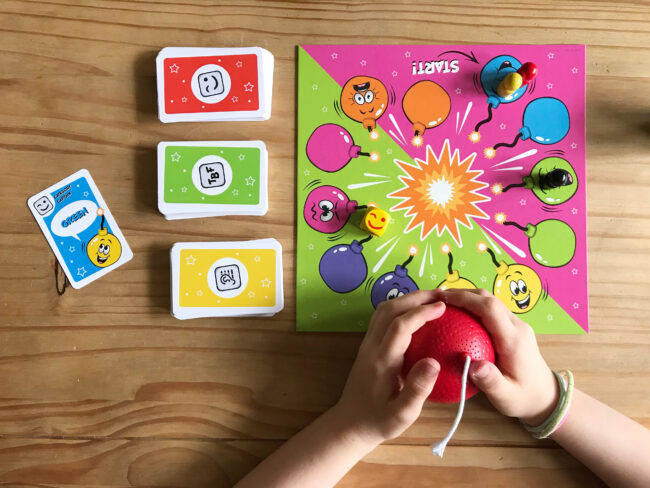 Pass the Bomb! The Big One is a game for 2 to 8 players, and is aimed at age 8+ though as mentioned above my 5 year old also joined in. I really like that this game makes you think and encourages your literacy skills, and I also like that you can adapt it to your fit the ages of players. Overall, this is a really fun family game and has been perfect for passing the time (no pun intended) on rainy summer holiday afternoons. Pass the Bomb! The Big One is available from Amazon (affiliate link).

Disclosure: We were sent a free copy of Pass the Bomb! The Big One in exchange for an honest review. All views and opinions in this review are our own. The Amazon link in this post is an affiliate link. This means if you buy anything via this link, I received a small percentage at no extra cost to you, which helps to keep this blog running. Thank you.