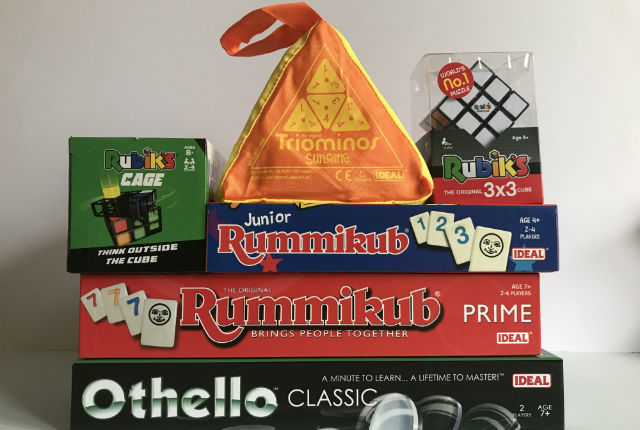 We’re in to the second week of our school ‘holidays’ here in Edinburgh, and it’s not quite the Easter holiday we had all been imagining. Tomorrow we were meant to be flying to Germany to visit my family, but of course that isn’t happening. But we’ve been managing to keep the lockdown blues at bay, thanks to a big boredom buster bundle from Ideal Games UK that we were sent for review. 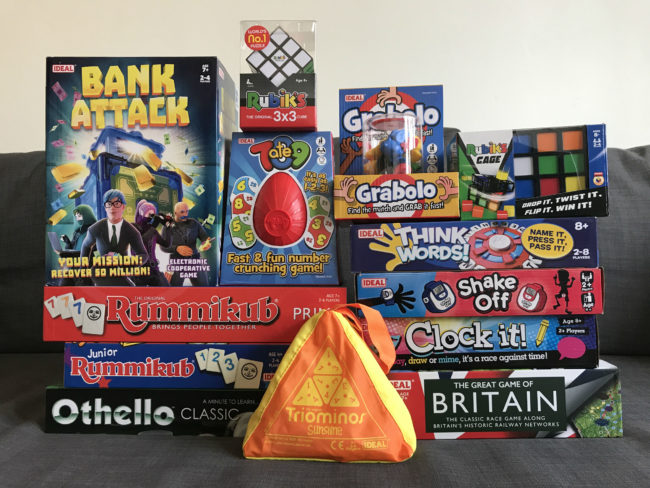 This mega bundle arrived a couple of weeks ago, and the boys felt like their birthdays and Christmasses had all come at once! We weren’t actually asked to review all of the games included in the bundle, the company had decided to add in a few extras goodies to say thank you and to sweeten the current situation, so a massive THANK YOU from us! I am going to bring the other games out bit by bit over the coming weeks.

Disclosure: We were sent a free bundle of games in return for an honest review. All views and opinions are our own. 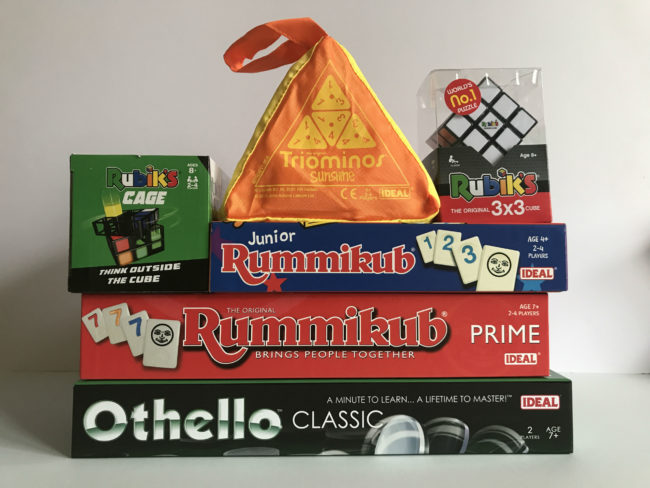 So, the games we were asked to review were Othello, Rubiks, Rummikub and Triominos. One things all these games have in common, is that they all involve strategic thinking and numbers or counting, which is perfect for a little extra numeracy whilst schools are closed. 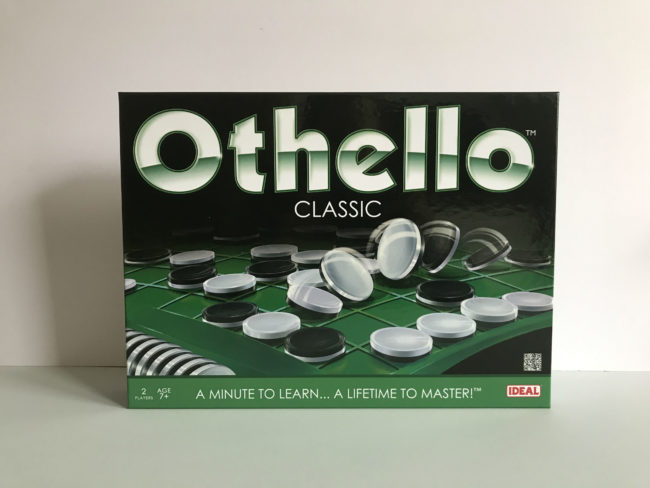 First, let’s take a look at Othello. It’s a two player strategic game, and their tag line is “A minute to learn, a life time to master.” Othello is played on an 8×8 squared board, with double sided counters that are white on one side and black on the other. 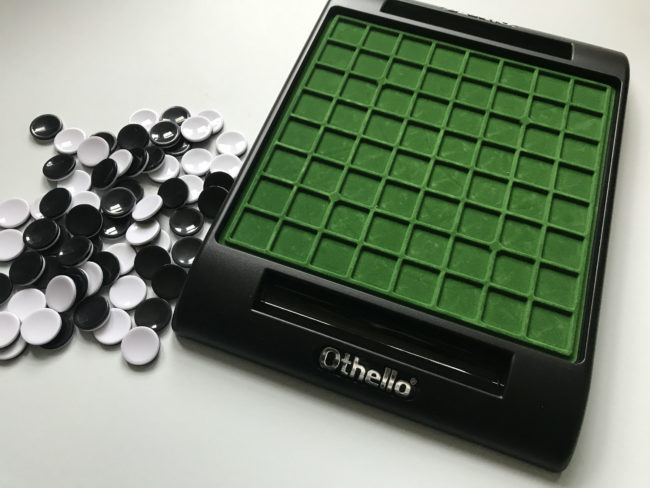 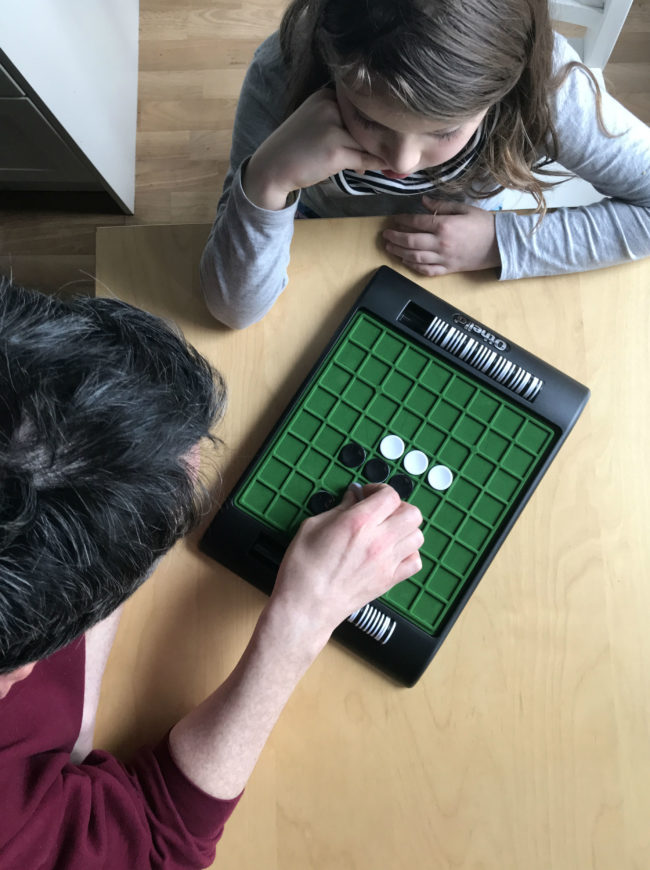 The game is over when neither player can make another move, or when the board is full. The winner is the player who has captured the most counters. 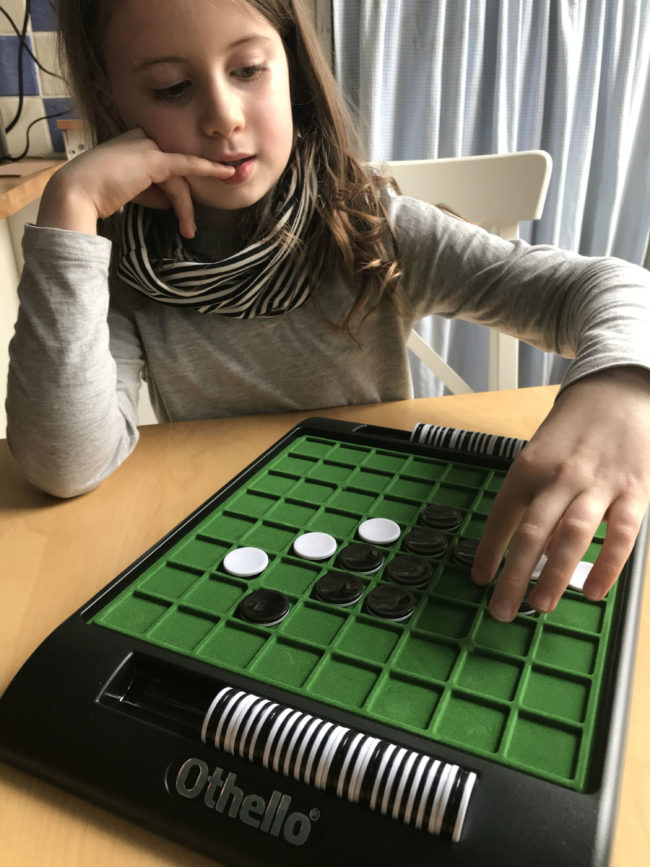 Just as the game claims, it is indeed very easy to learn. It’s recommended for ages 7+ and our 9 year old has loved playing it with his dad. He even managed to win against daddy! Othello is available from Amazon. 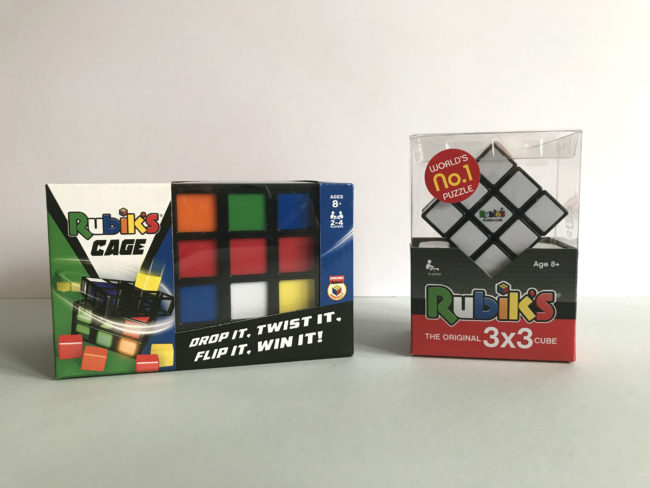 Next, we have Rubiks. We got sent two Rubiks products, the classic Rubiks Cube, and a variation on this – the Rubiks Cage. I don’t think the Rubiks Cube needs much further introduction, it’s a classic for a reason. My husband has several Rubiks cubes, including an original and a couple of variations which he trains with for speed. The boys are delighted to now have a classic Rubiks Cube of their very own, so that they don’t need to ask for permission to use daddy’s ones any more. 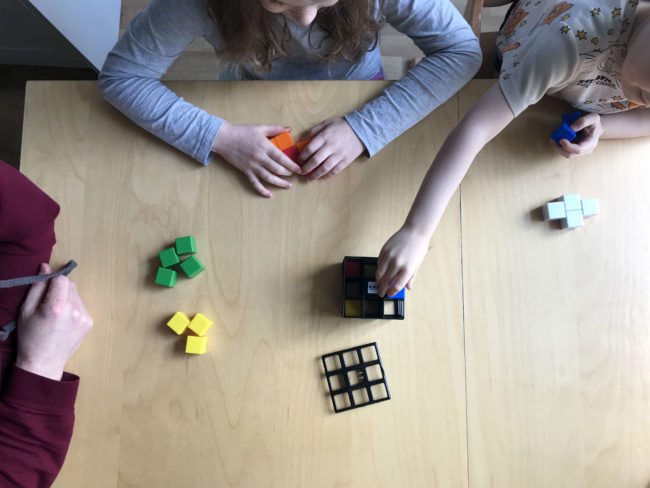 The Rubiks Cage is a multi-player variation on the classic, and can be played with 2 to 4 players. It reminds me a bit of noughts and crosses, as you need to try and get three in a row, but with a Rubiks twist. The cage comes with cubes in six different colours, with the colours divided evenly among players. You take it in turns to insert a cube in to the cage, trying to make rows of three out of your colours. 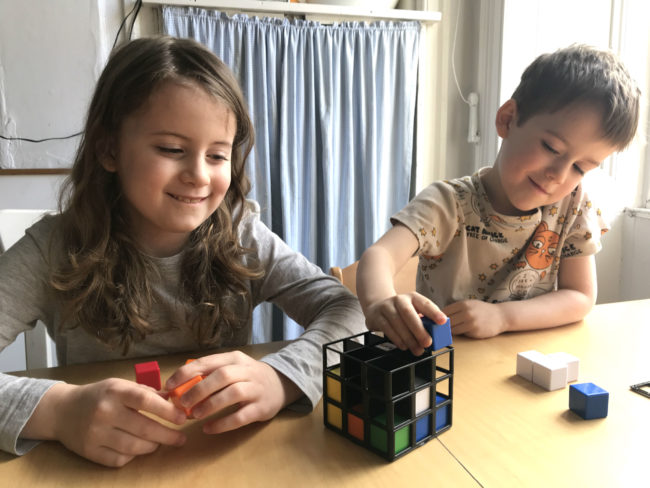 Instead of placing a cube, you can instead also choose to turn the cage upside down or rotate one of the three different layers, to reshuffle and scramble the cubes and try to foil your opponents. It requires quite a bit of strategic thinking, and is not as easy as it looks! 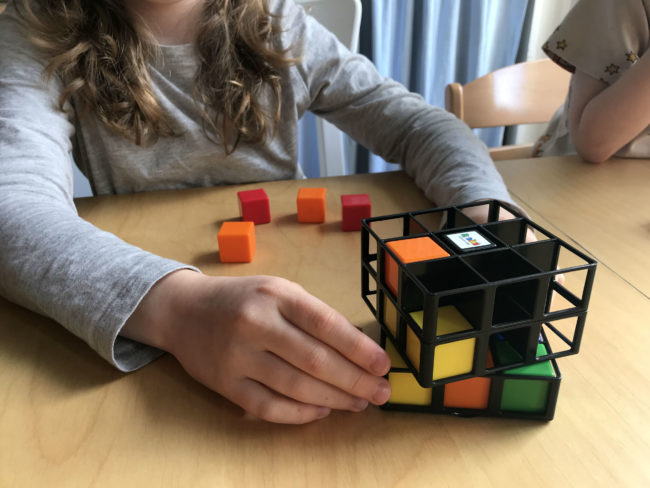 The Rubiks Cage is recommended for ages 8+ but our 5 year old really loves this. He’s not particularly strategic about it, but he enjoys dropping in the cubes and messing up everyone else’s plans by turning and rotating it. The classic Rubiks Cube and the Rubiks Cage are both available from Amazon. 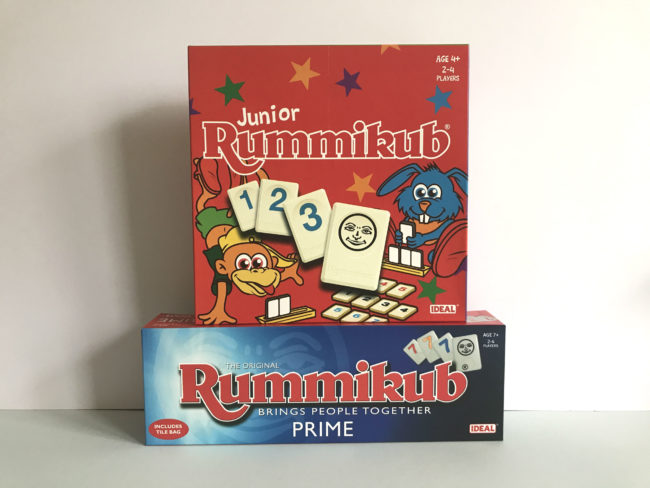 We were sent two different versions of Rummikub – a classic Rummikub, and a Junior Rummikub version. I used to play Rummikub a lot when I was younger (it was the number one game on any youth group trips I went on), but I hadn’t played it before with the boys. In classic Rummikub, you have eight sets of numbers from 1 to 13 in four different colours (two sets in each colour), plus two joker tiles. Players create groups  with three or four tiles of the same number in different colours or runs  with three or more tiles of consecutive numbers of the same colour – and you can also add tiles to and move tiles from existing groups and runs. The first player to use up all their tiles wins the round, and scores the value of all the other players’ remaining tiles. Classic Rummikub is recommended for ages 7+. 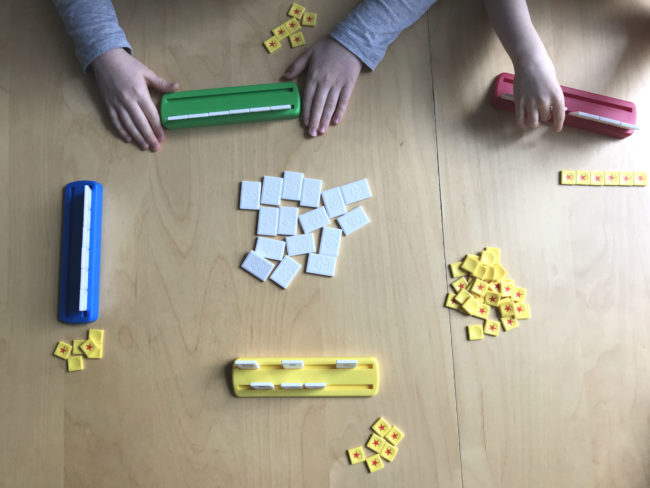 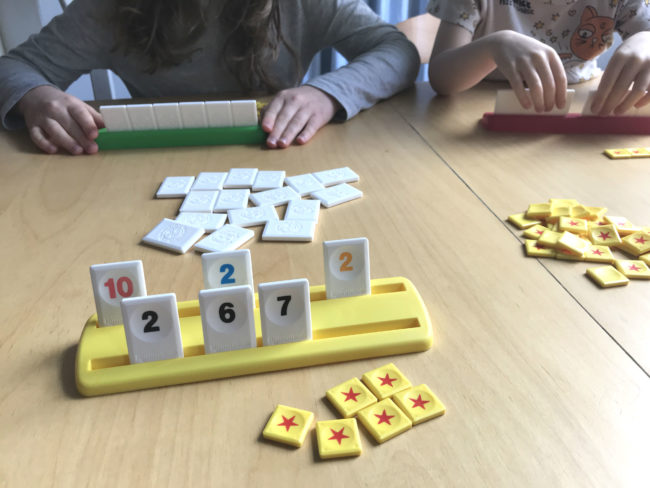 Junior Rummikub is a simplified version of the classic game, aimed at players age 4+ and we’ve only played this one with the boys so far, so that our youngest could join in too. In this simplified version, there are only four sets of tiles – each one in a different colour – and they only go from 1 to 10 instead of 1 to 13. Plus there are also four jokers. In the Junior Rummikub rules, you don’t create groups of the same numbers, only runs of consecutive numbers, though there are still the options to add or move tiles to or from already played sets. The scoring system has also been simplified, with star tiles that players can earn or lose. The first player to play all their tiles ends the round, and the winner of the round is the player with the most stars. 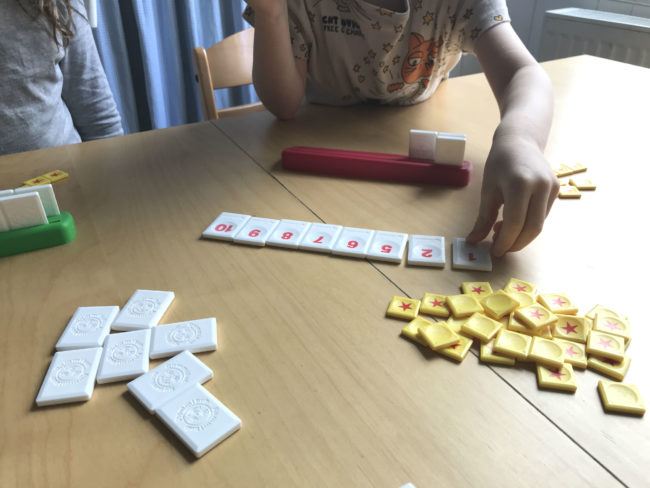 This is a really great game for younger children who have learned their numbers from 1 to 10, and for practicing what comes before or after a certain number. In fact, that’s exactly the kind of numeracy work that our school has been sending home for our youngest (who is in P1) so this has been a fun way of doing some extra homework without even knowing it! 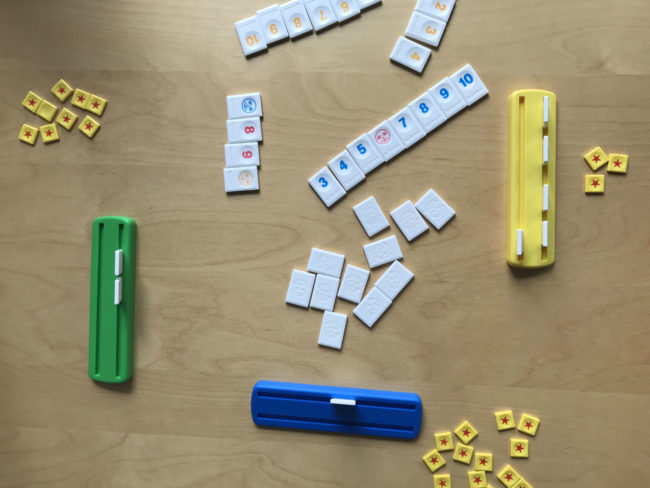 The one thing I would suggest though, is playing the game with open tiles until everyone gets that hang of the rules. This helped our youngest a lot, who was unsure of what to do when we first played this and everyone had their tiles hidden. Classic Rummikub and Junior Rummikub are both available from Amazon. 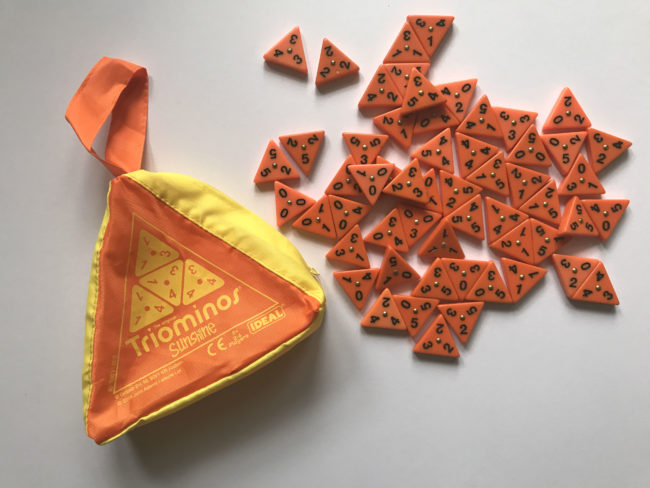 Last but not least, another great game to practice your numbers and addition skills is Triominos. It’s a level up from simple dominos, and played with triangle playing pieces that have a number in each corner. Players take it in turns to add tiles that match two numbers, and with each tile having a unique number combination it becomes increasingly difficult the more tiles are played. 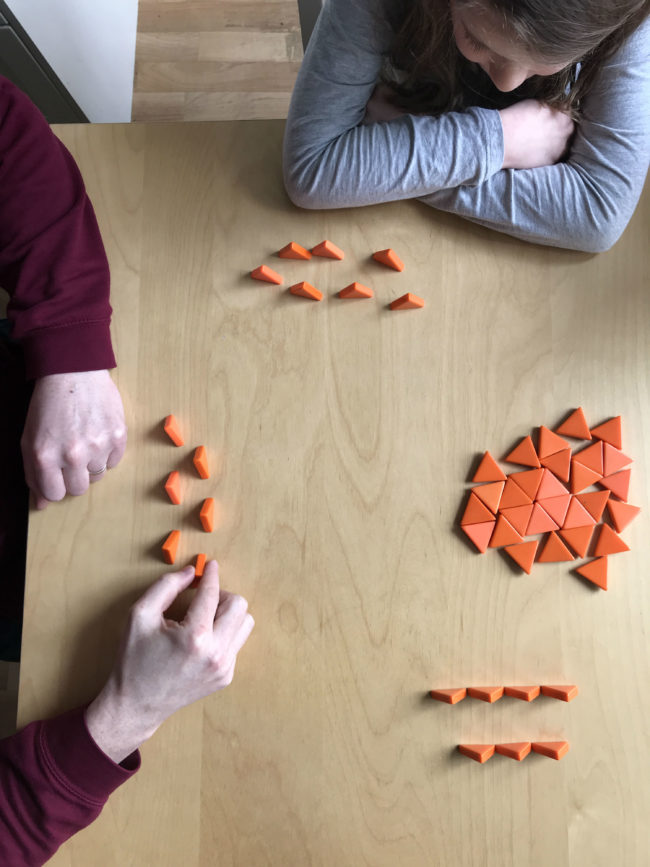 Points are scored by adding all three numbers of each tile you play, and you can score extra points by creating certain formations where all three sides have to match, such as the bridge… 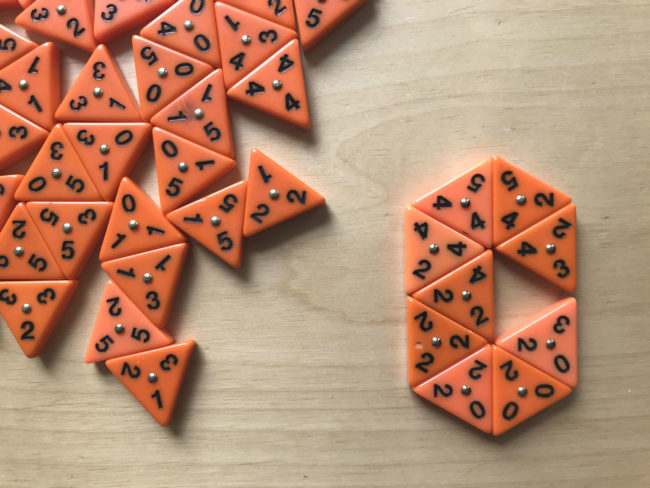 (three corners matching, with a space in the middle), or a hexagon… 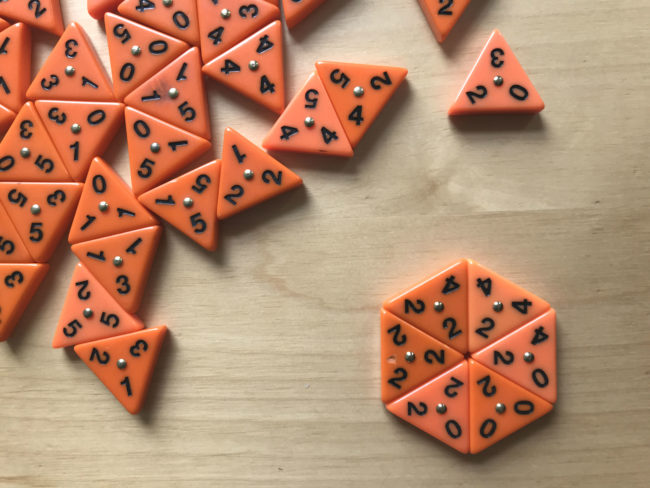 Or even a double hexagon, which seems quite tricky to score as we haven’t managed to make one yet! 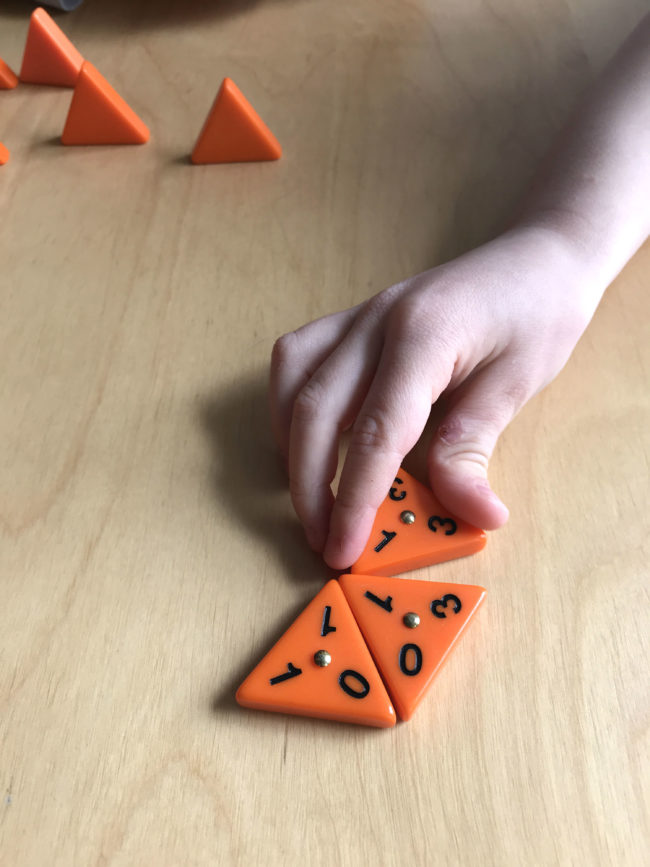 Triominos is recommended for ages 6+ though our youngest, who is 5, also managed to play. We simplified the rules a little though when he joined in, and just went for the first player to play all their tiles wins. But the full rules with all the scoring is great for our 9 year old to practice his mental arithmetic. 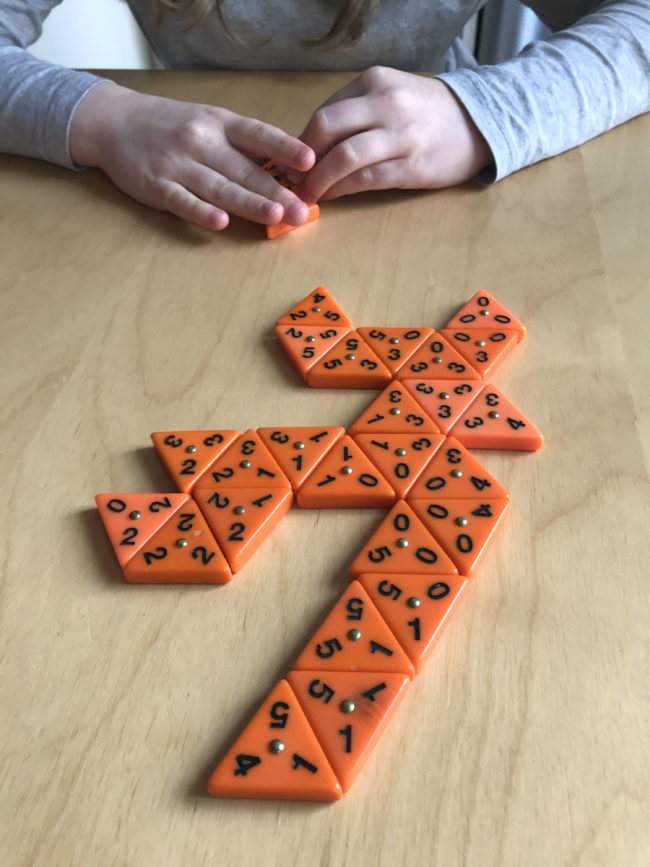 Triominos comes in a handy little soft pouch, which doesn’t take up much space, so is also great for taking travelling with you (when we can travel once more…) Triominos is available from Amazon.

We have really enjoyed testing out these games. Rummikub and Triominos are both great for encouraging numeracy skills, and all four games are great for developing strategic thinking. Whether you go for a classic like Othello or Rummikub, or try something new with a twist like the Rubiks Cage or Triominos, I don’t think you would go wrong with any of these.

Even though we weren’t expected to review the other games we received, I just wanted to give them a quick name check too, as a way of saying thanks. Please note we have only played the first two of these so far:

Bank Attack – This is a cooperative game that tests your listening and reaction skills, where all players have to play together to crack the safe. We have already played this, and our 5 year old absolutely loves this, he can’t get enough of it. It’s aimed at ages 7+ but it has five progressive levels of difficulty so we just play it on the easiest level with him.

Shake Off – This is another one we’ve already tried, that our 5 year old can’t get enough of. You have to wear a Shake-o-meter on different parts of your body, and see who can get the highest score shaking before the timer runs out. A great game to burn off energy in the garden. For ages 4+

Clock It! – A family game for ages 8+ where you have to describe, draw or mime words on a card.

Think Words! – A quick thinking word game for ages 8+ where you have to find words for various topics for each letter of the alphabet.

The Great Game of Britain – A classic race game for ages 7+ along the Britain’s historic railway networks.

7 ate 9 – A number based card game for ages 8+ that challenges your mental maths skills.

Disclosure: We were sent a free bundle of games in return for an honest review. All views and opinions are our own. Please note that the product links in this post are Amazon affiliate links. That means if you buy anything via these links, I receive a small percentage of the sale – at no extra cost to you – which helps to keep this blog running. Thank you.