It’s time for this month’s review for the Asmodee UK Blogger Board Game Club, and oh my, do we have a beauty to share with you! A lot of the time we play games together that the whole family – including our youngest (who is just short of 5) – can join in, but now that our eldest is 9 we are also starting to introduce some games for the 8+ range to play with him so I was very excited to be sent Azul for review. 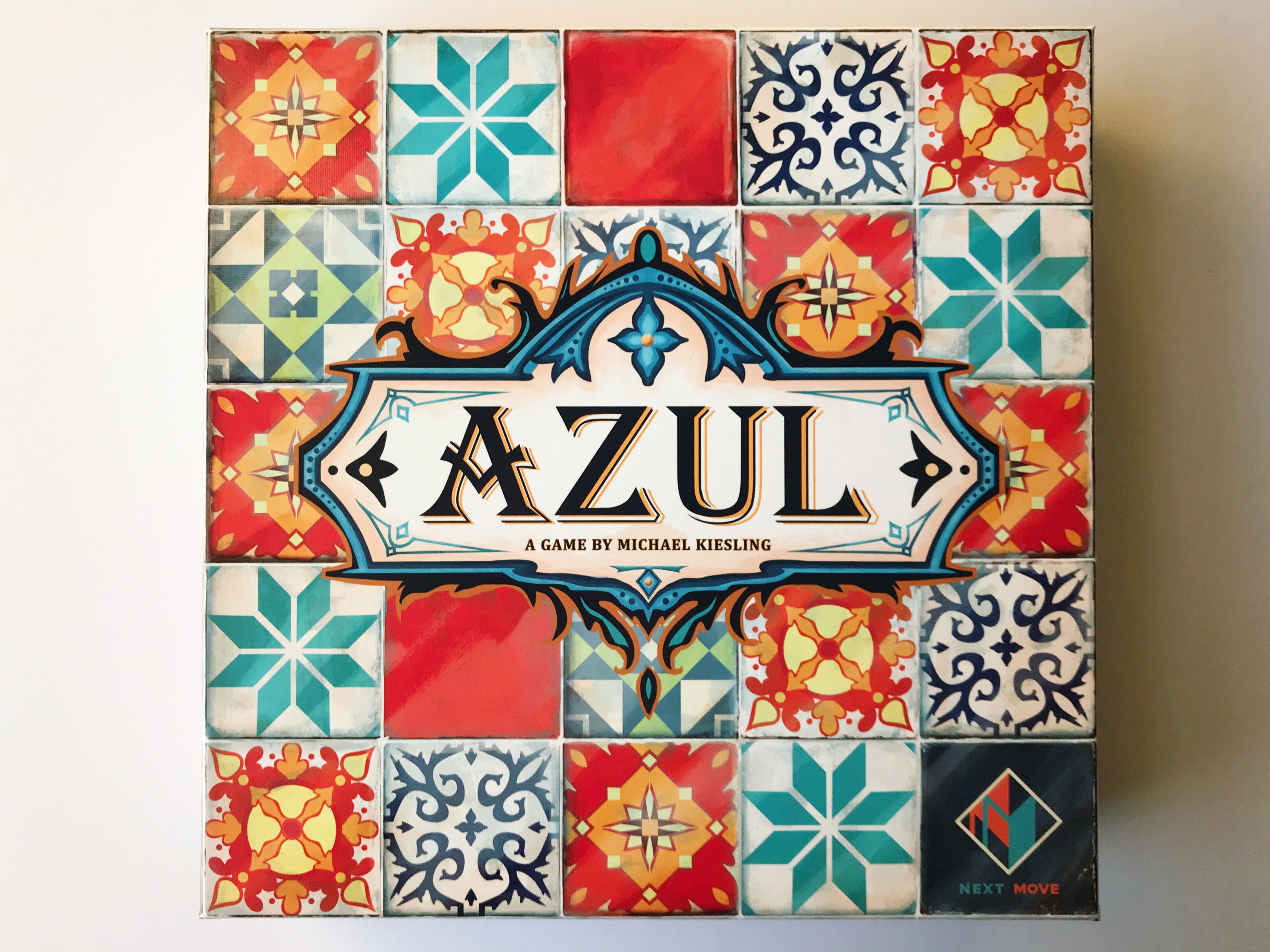 Azul takes its name ‘azulejos’ – ceramic tiles introduced by the Moors and embraced by the Portuguese when their king, Manuel I, was mesmerised by the beauty of the decorative tiles he saw on a visit to the Alhambra Palace in Southern Spain. He immediately ordered his own palace in Portugal to be decorated with similar tiles. In Azul, you take on the role of a tile layering artist, to decorate the Royal Palace of Evora. Your aim is to design the best tile display and score the most points. 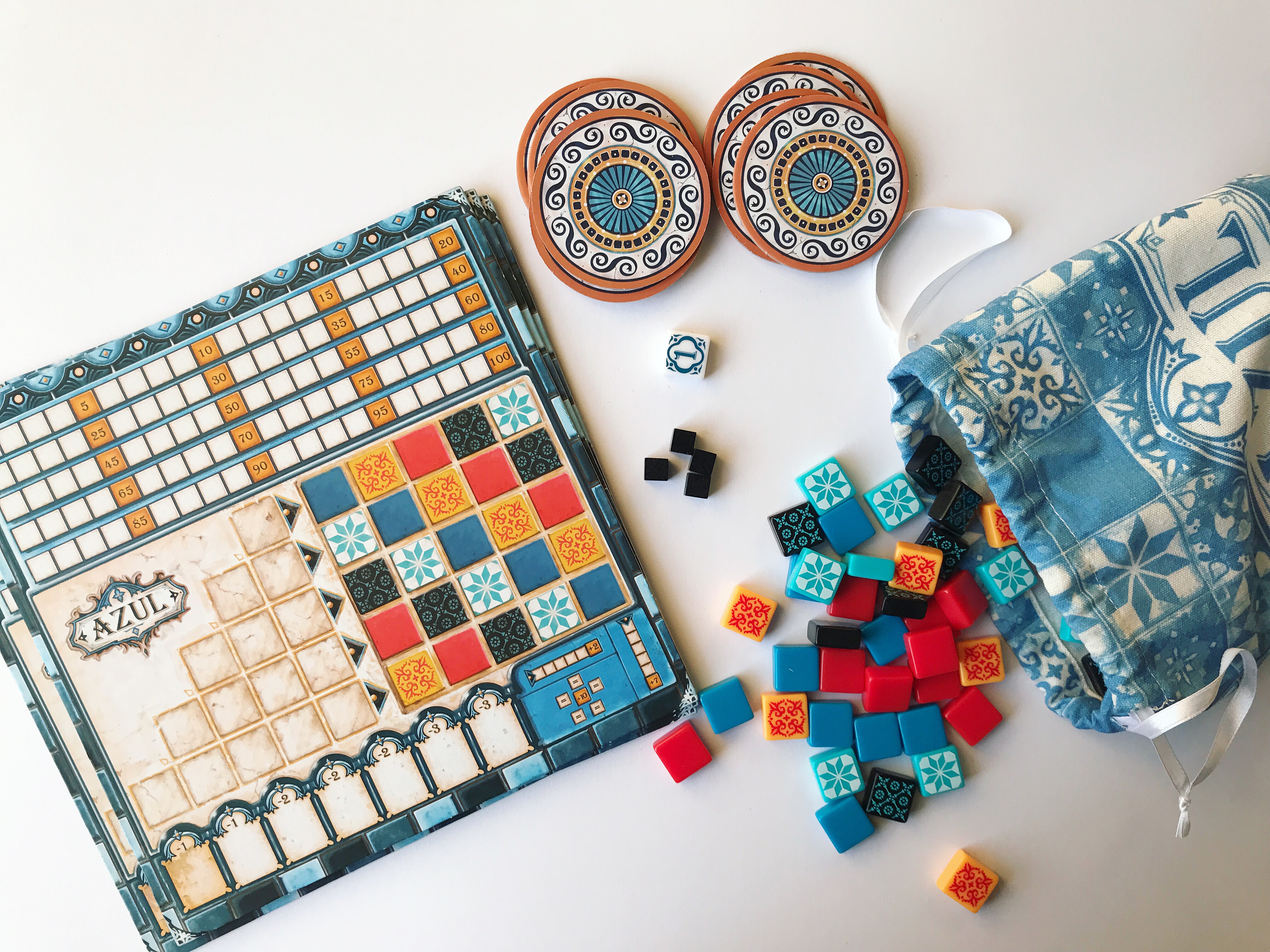 What’s in the box? In the box you will find 4 player boards and scoring markers, 9 round factory display boards, 100 resin tiles in five different designs, a linen bag, a starting player marker, and a rule book. 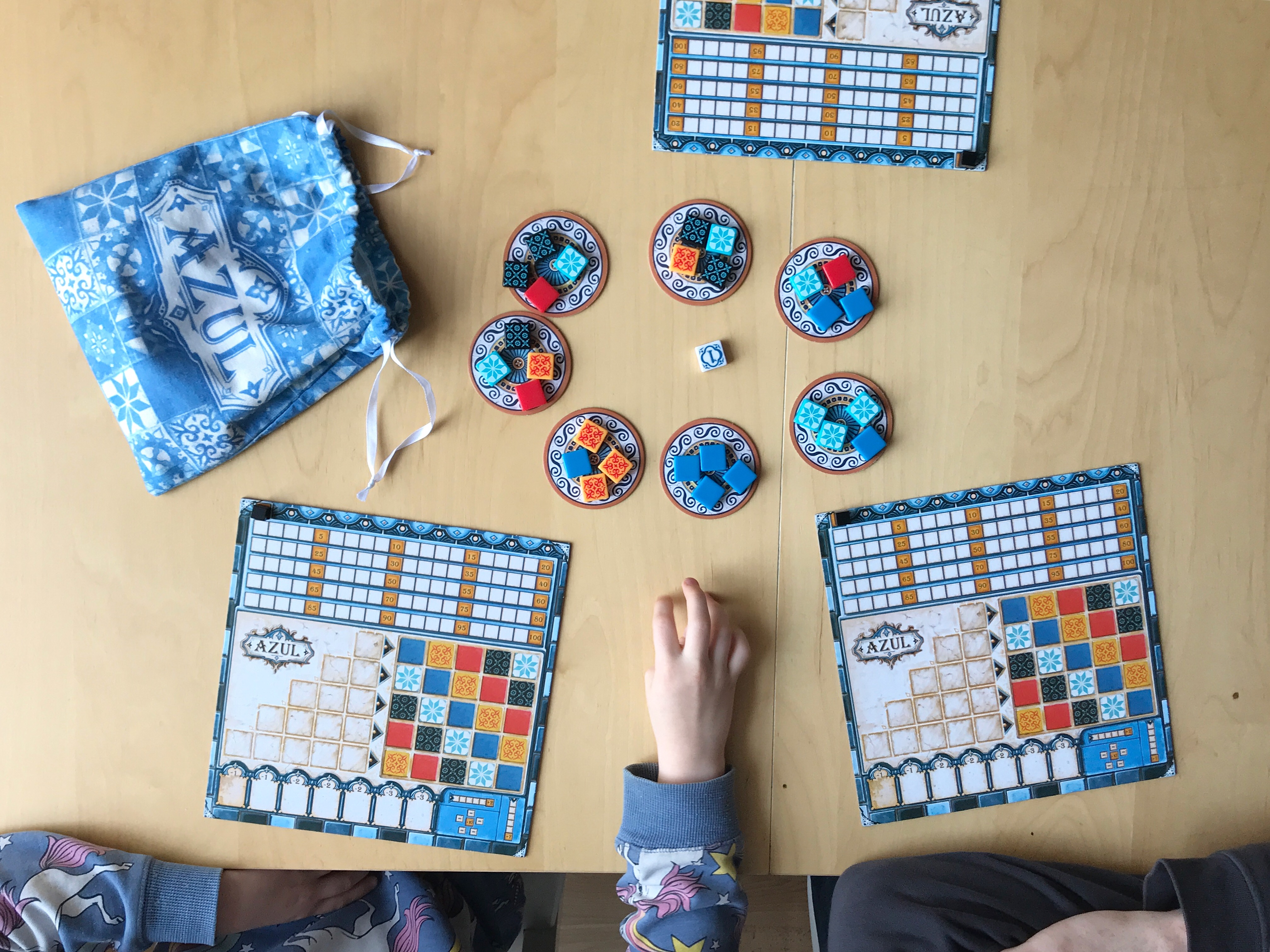 Set-up: To set up the game, each player gets a player board and scoring marker, which is placed on space <0> on the scoring track at the top of each board. Next, the round factory display boards are laid out in a circle in the middle of the table, with either five, seven or nine boards depending on the number of players. The tiles are placed in the linen bag. Finally, the starting player places four tiles – drawn at random – on each of the factory display boards, and places the starting player marker in the middle. Ready to play!

Game play: The game is played over several rounds, each consisting of three phases. Firstly, collecting tiles from the factory. Secondly, tiling your wall and scoring. And, finally, preparing for the next round. A quick note on the player boards: each board consists of four areas – at the top there is the scoring track, as mentioned above. In the middle, you have five rows on the left where you collect tiles from the factory, and a ‘wall’ on the right where you move the tiles to in the relevant phase. And at the bottom of the board is the ‘floor line’ where you can store excess tiles. 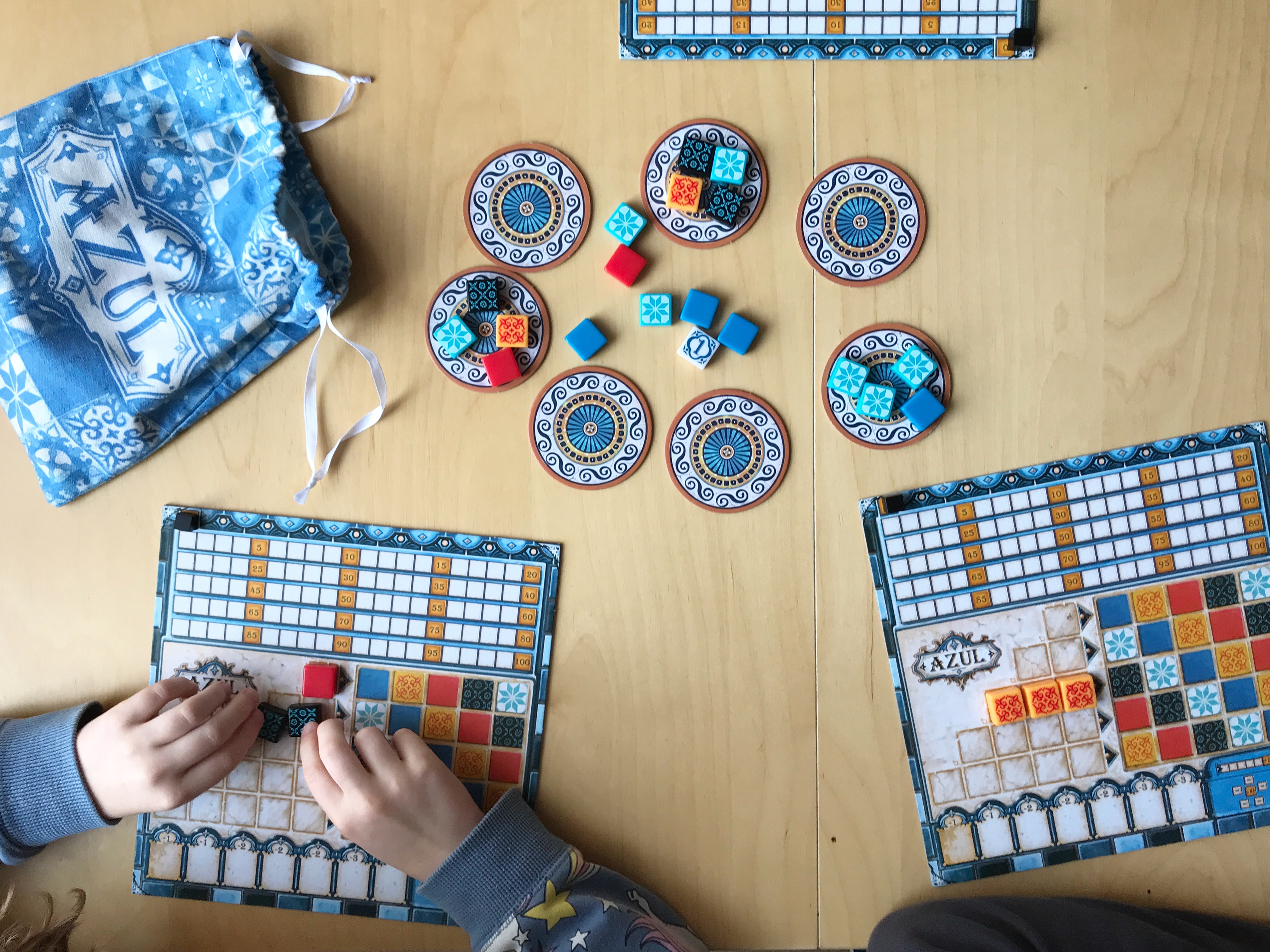 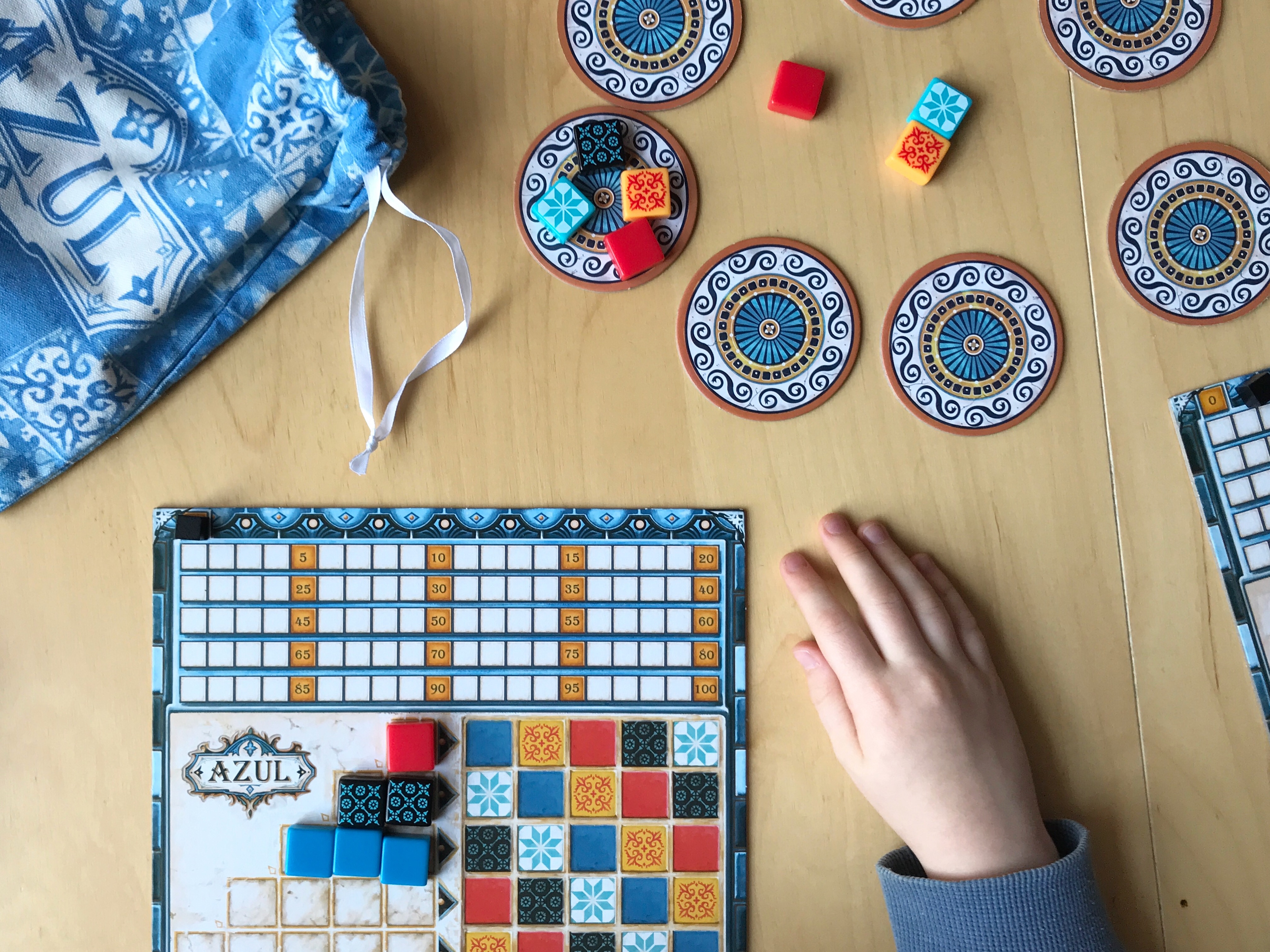 Play continues in clockwise direction, and the factory round finishes when all tiles have been picked up from the factory displays and the middle. Now comes the tiling and scoring phase, which all players can do simultaneously. 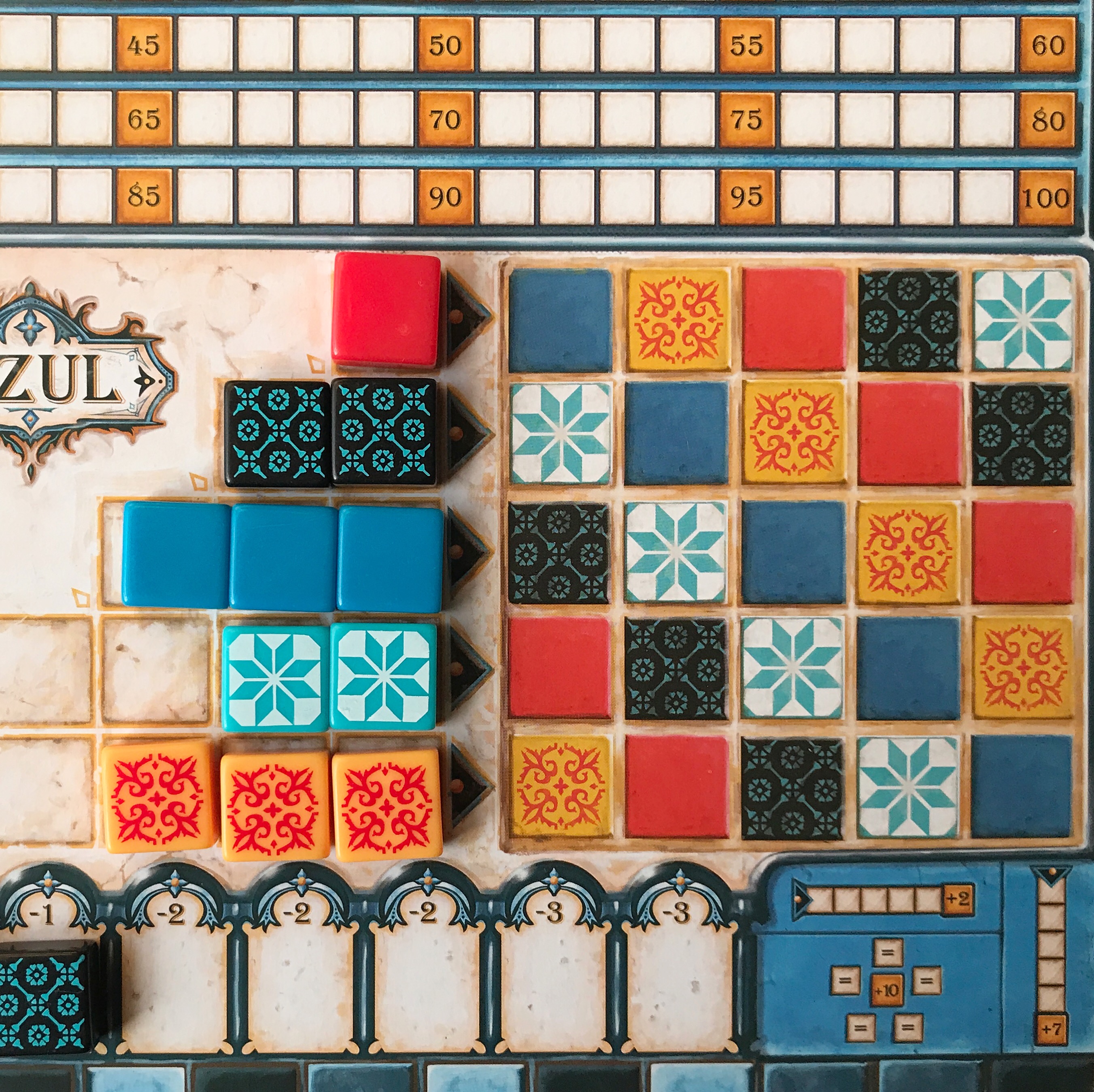 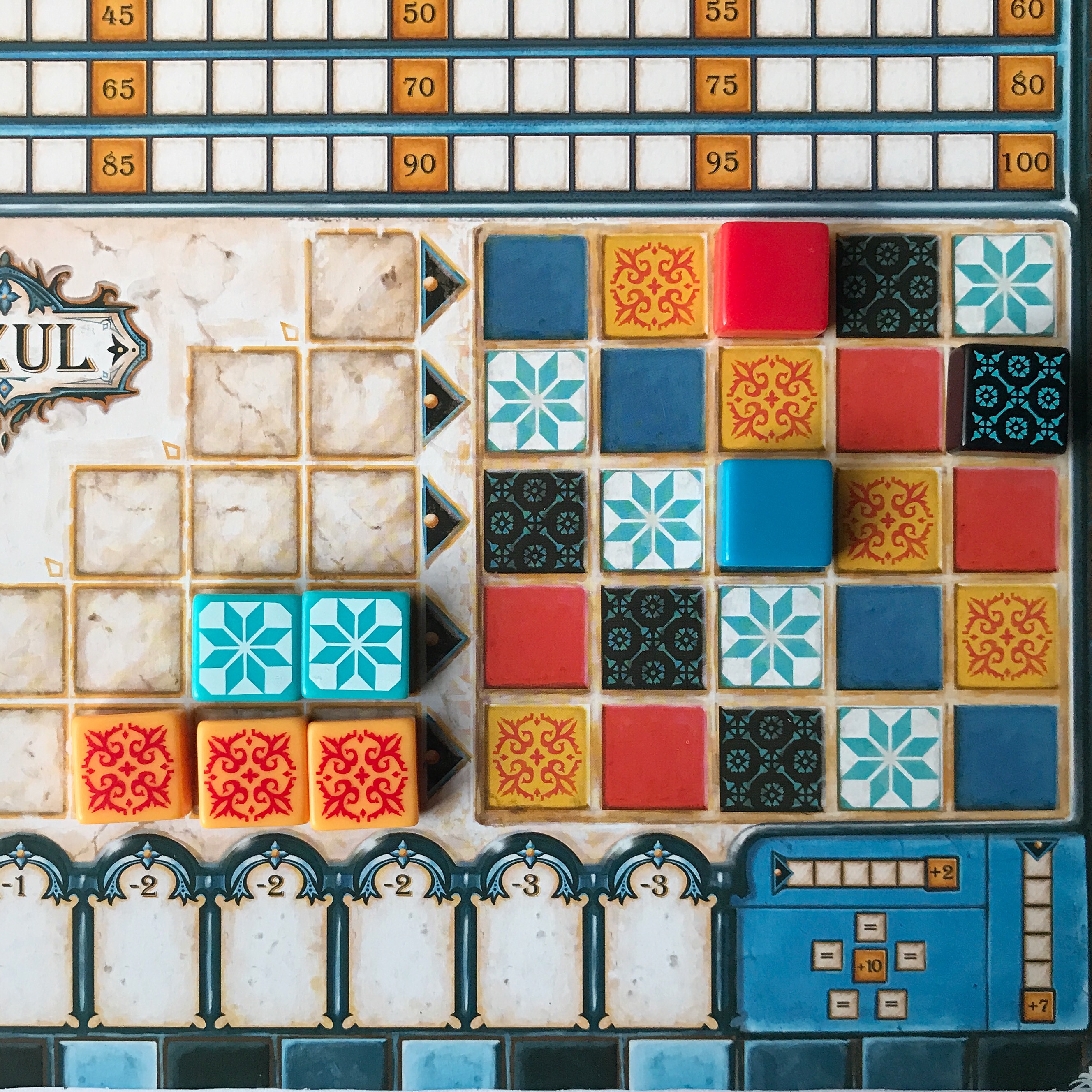 Go through your rows from top to bottom, and from every complete row move the rightmost tile over to the space of the same design/colour on the corresponding line of your wall. The rest of the tiles from that row get moved to the lid of the game box. You score points according to how many other tiles each new tile is adjacent to, so it’s important that you do this in the correct order. Move your scoring marker along as you move each tile over to your wall – and don’t forget to subtract any minus points from the tiles on the ‘floor line’! If you have any incomplete rows, those tiles just stay on your board until the next round. 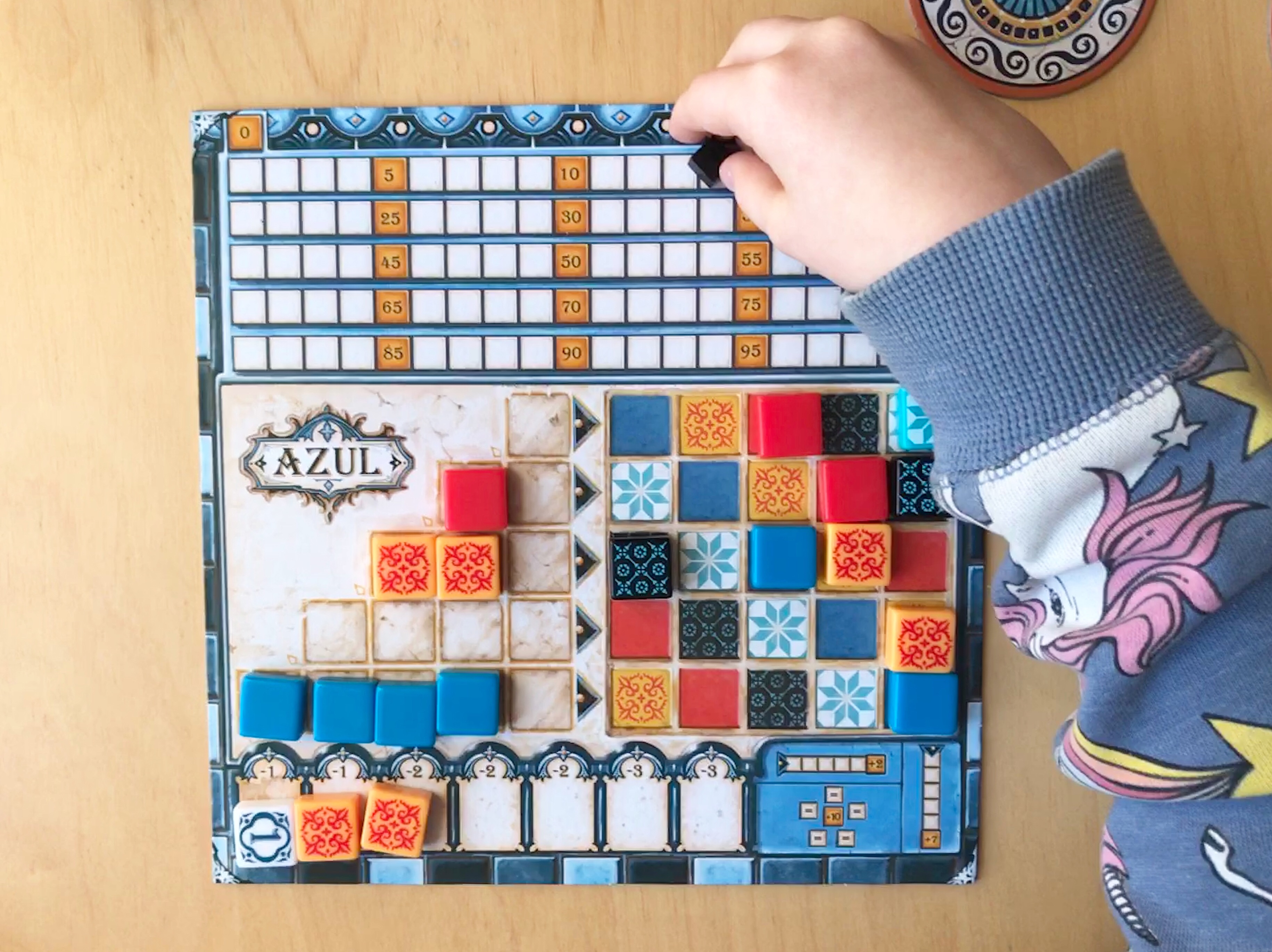 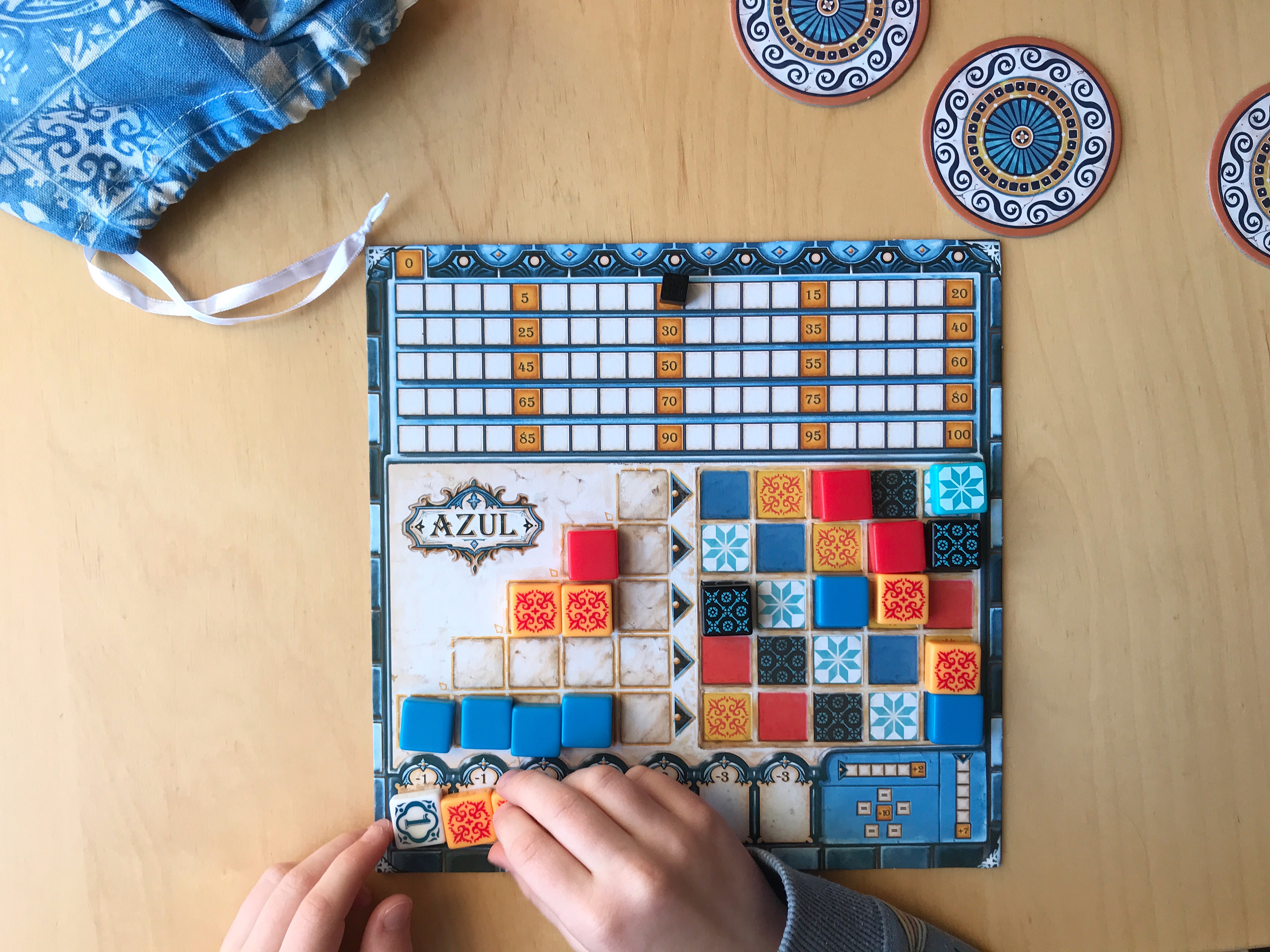 Tiles on the ‘floor line’ give you minus points

Once everyone has finished tiling their walls, it’s time to prepare for the next round. The player with the starting marker refills the factory display boards with tiles from the bag (if the bag is empty at any point, refill it with the tiles that have been collected in the box lid), and places the marker back in the middle. Ready for the next round! 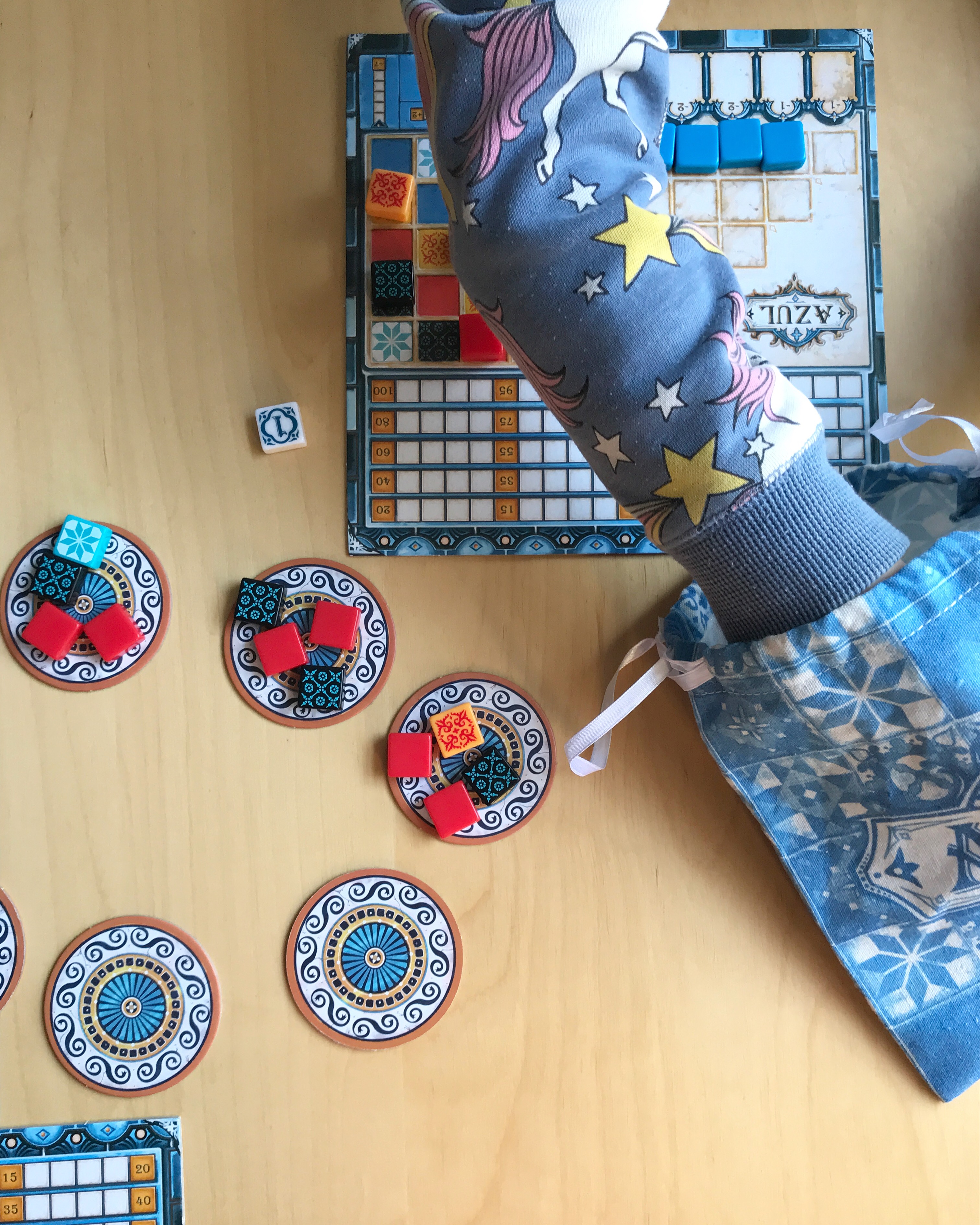 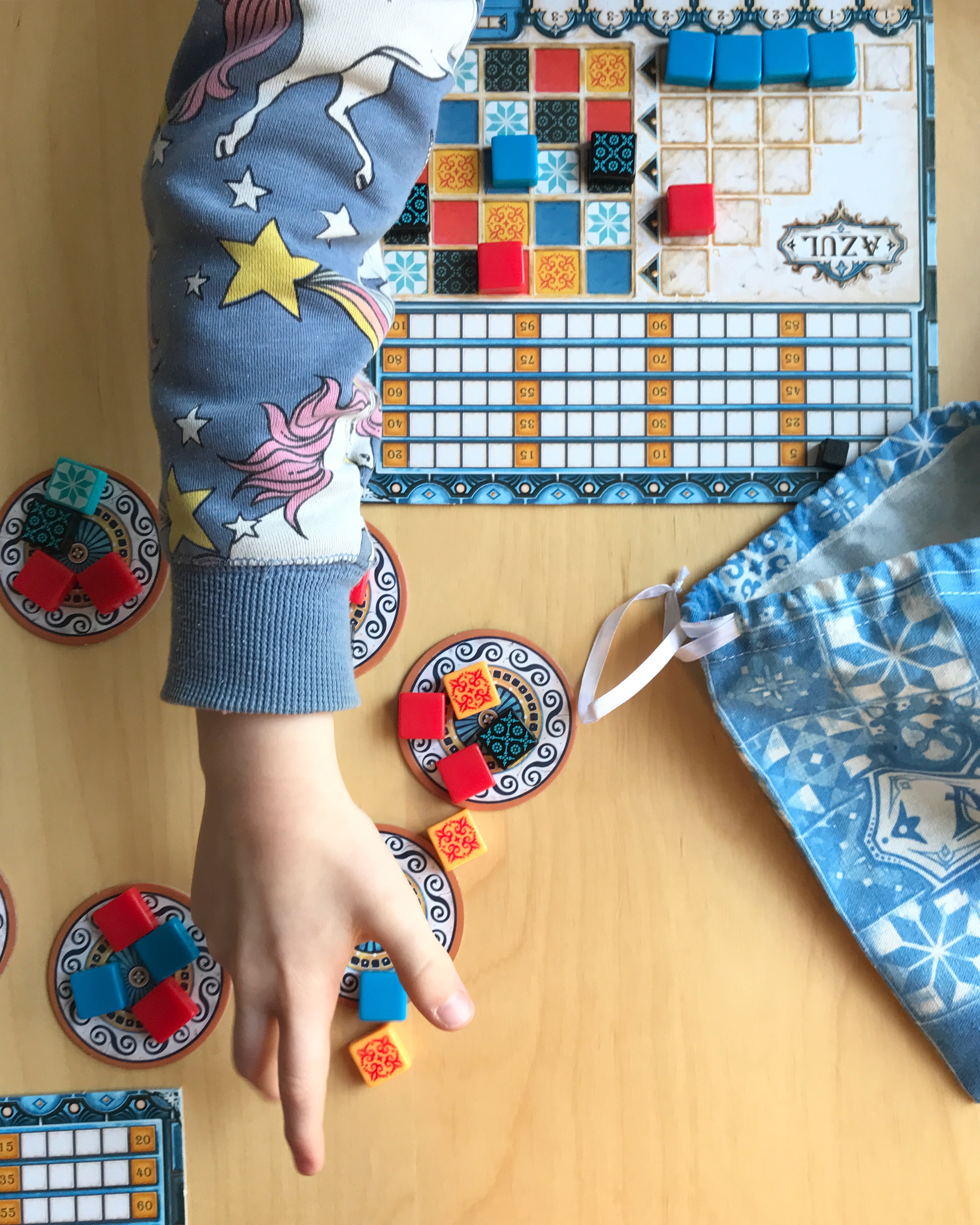 Game over: The game ends, when a player has completed at least one horizontal line on their wall at the end of the tiling phase. During the final scoring, you can also gain extra points for every completed horizontal and vertical line on your wall, and for any tile design for which you have placed all five tiles on your wall. The winner is the player with the highest score. 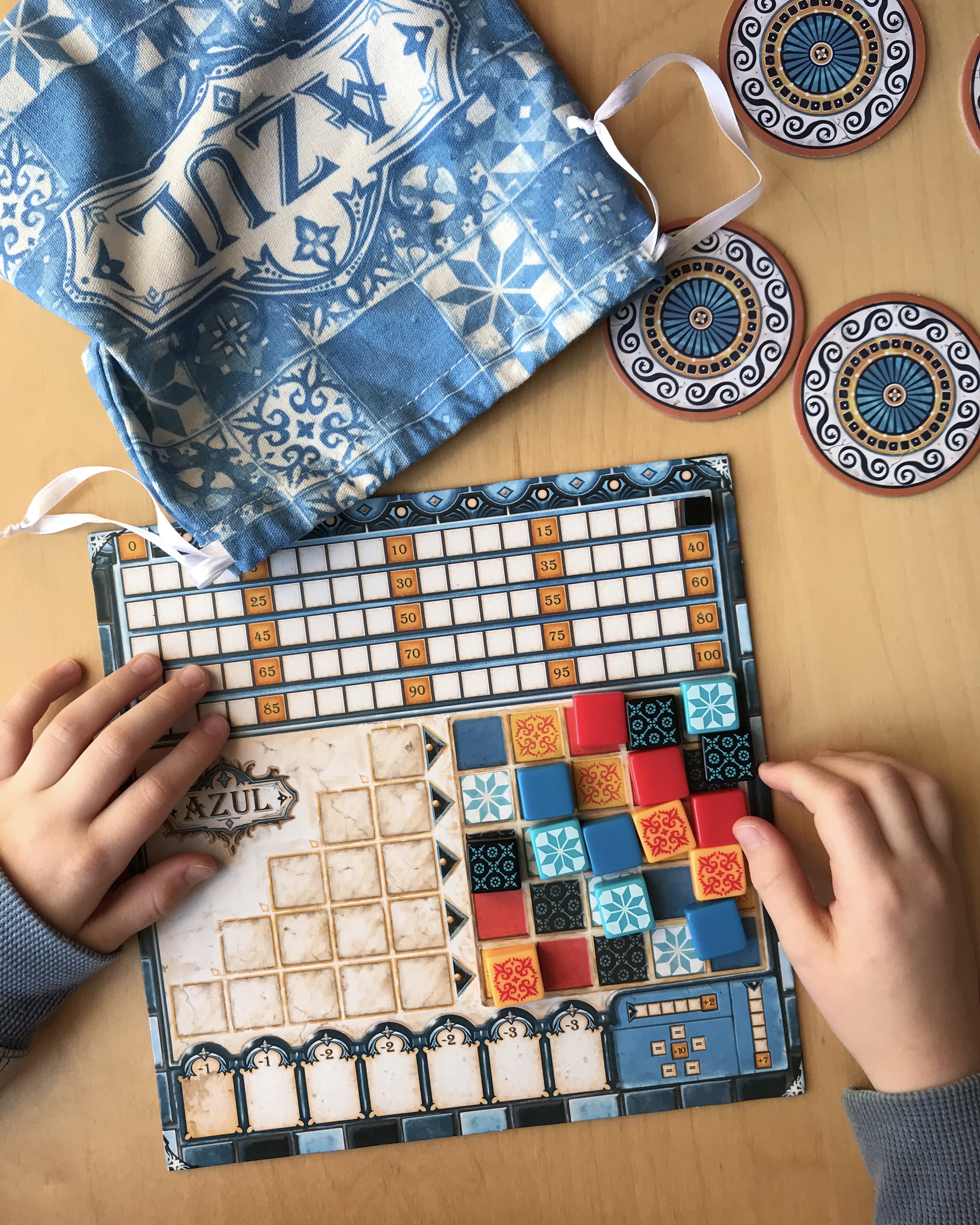 Our thoughts: First of all, this game is really stunning in its design. The artwork is gorgeous, the colours are vibrant, the tiles feel nice and chunky. But does it live up to its inviting appearance? Yes, it does. At first glance, it seems very simple – collect tiles, arrange tiles in a pattern. But the game gets increasingly difficult as it progresses, as you cannot collect tiles in a row that already has that type of tile on the wall. So while all is fair game in the first round, in subsequent rounds you need to start being strategic about which tiles you collect on which row. You also need to keep an eye on your opponent’s boards and rows, and try to guess which tiles they are going to pick to avoid being left with tiles that will score you minus points. Or trying to force their hand in to taking tiles they don’t need. Other strategic decisions include when to take tiles from the middle – at first glance you want to avoid being landed with the marker that gives you minus points, but sometimes it’s worth the risk to avoid getting even more minus points later in the game. We played it with both two players and three players (my husband and I, my 9 year old and I, and all three of us together), and the three player game adds extra challenge as you need to second-guess not one but two opponents. We look forward to trying it with four players, next time we have guests. 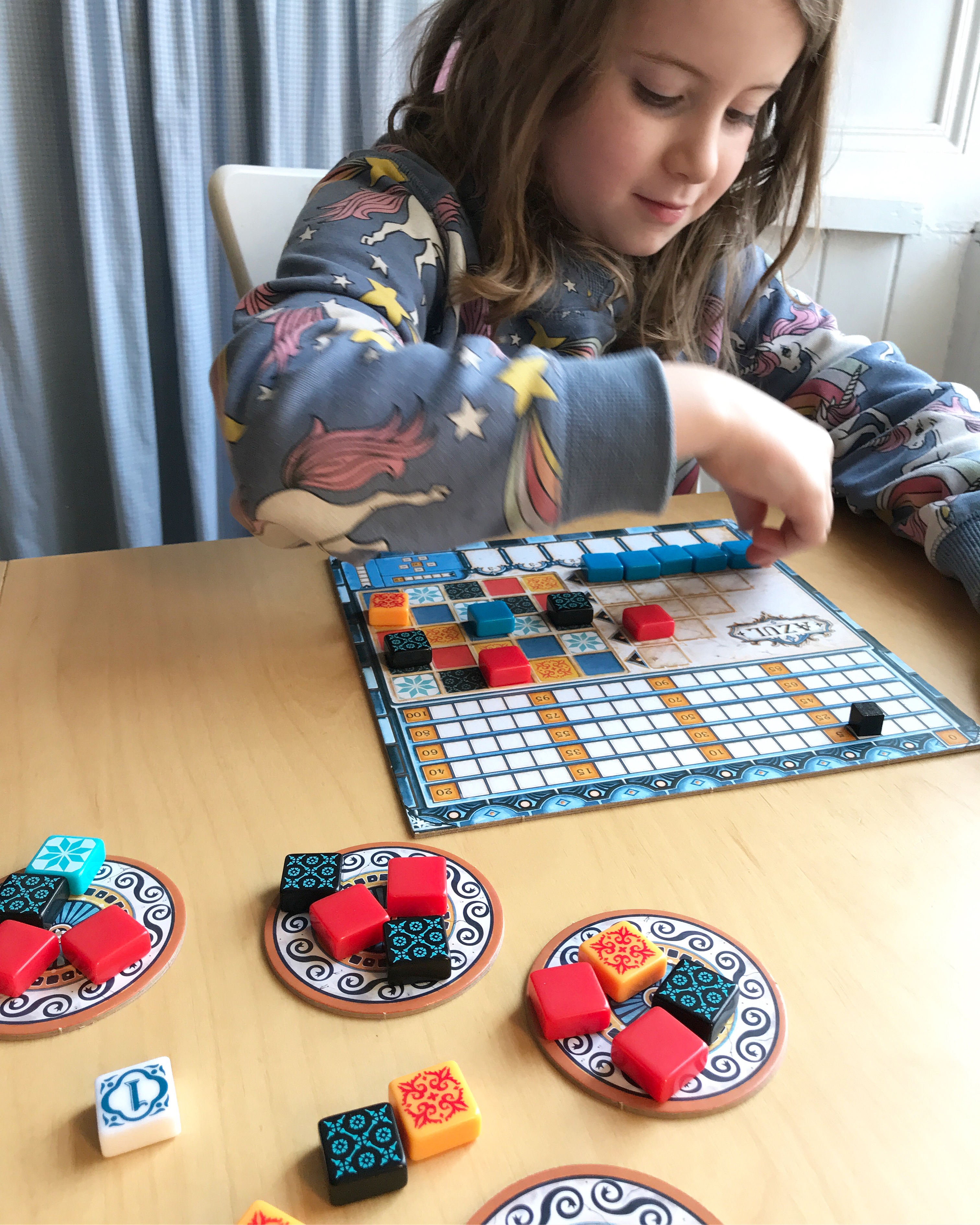 Over all, we all really enjoyed playing Azul. We felt the game was a perfect balance of simple rules, with a certain amount of strategic thinking required but without making it too difficult. It definitely ranks high on our ‘play again’ list. Azul is a game suitable for 2 to 4 players, and recommended for ages 8+. The game takes around 30-35 minutes to play. It is available from Amazon.