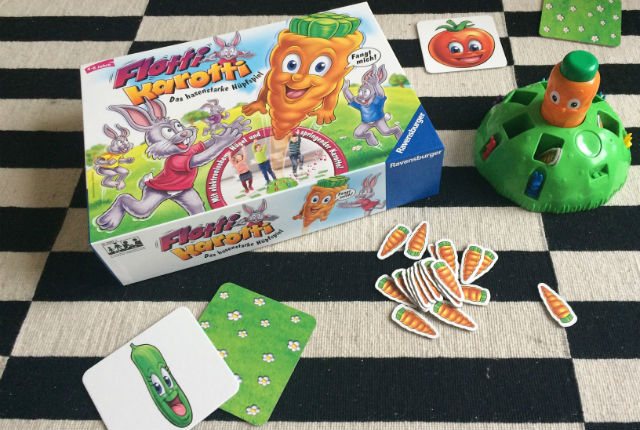 With all the rain we’ve been having this summer, both in Berlin and in Edinburgh, our board games have been getting a good work out. We always find that a round of board games is perfect for chasing away the rainy day blues, and there is one game that is a stand out favourite with the boys at the moment. I’ve been in two minds about whether to review it for you, as it is in German and requires some language recognition. BUT the boys love it so much and there are not that many phrases you need to know, so I thought I’ll run with it and just give you the necessary translations. In fact, once you know the flow of the game, you don’t really need to understand any of the German at all! I will tell you how, if you read on – just look for ‘EASY OPTION’ in the text. I’ve also included a quick summary at the end of the post, though to understand the game play, it helps if you read the full text first.

‘Flotti Karotti’ was a gift last Easter, for the whole family, from my parents. It’s partly physical action, partly reaction skills, and partly memory training. And it involves a talking, singing, jumping carrot! So, what’s in the box? An electronic hill (‘Hügel’), with a big slot in the middle for Flotti Karotti. To set up the game, push him in all the way down. Around the outside of the hill are six smaller slots where you slot in the six coloured rabbits along the bottom – or as many rabbits as there are people playing. The hill requires batteries, and off the top of my head I can’t remember if they were included or not but I think not. There are also 16 large fruit & vegetable character cards, as well as 32 small carrot tokens (‘Karottenchips’). For setting up the game, spread the 16 character cards around the room, face down. The further apart you spread them, the more the kids will have to run around. Four of the cards are actually not real fruit or vegetables (see the bottom row in the picture below), they are just included to confuse the players. For a slightly easier game play, you could take these cards out. Keep the carrot tokens in a pile on the side, close to hand, and you are ready to go! To start the game, switch on the hill. There is a small switch, with two settings. The first is for a single player game, and the second for multi-player. Move the switch all the way to the right for a new multi-player game. Flotti Karotti will start talking and explaining the rules. You can just skip ahead, by pressing the button. The game will then start immediately. It consists of several rounds, and each round has 3 steps.

Flotti Karotti tells you what action to do, and then you need to do this as long as the music is playing. The boys love this, and go crazy jumping and dancing around the room. There are four different actions in total. All of them start with Flotti Karotti saying “Alle Hasen…”  (Engl: ‘All rabbits…’)

In each round, one of these actions will be called out (followed by Flotti Karotti shouting something like ‘hop, hop, hop’ or ‘yeah, yeah, yeah’), so you just need to remember the key words for each of the four.

EASY OPTION: To bypass the German altogether, just get an adult to call out any action as it doesn’t really matter which one you do. It’s just about getting the kids moving about. You could even make up your own. The music tells you when it’s time to stop.

Once the music stops, Flotti Karotti will tell you to find one of his friends (“Sucht meinen Freunde/meine Freundin…”). These are the names or the twelve named cards. The first half are very similar to English, the other half you will just need to memorise. The rule booklet included in the game also includes a picture of all the fruit & veg with their names, so you can use that for reference.

The kids then need to run around the room, turning over the cards until they find the right one (and memorising the other cards for the next round). While they are doing this, Flotti Karotti sings “Wer den/die [name of fruit/veg] findet, drückt meinen Knopf” – which roughly translates as, whoever finds the right card, gets to press the button. Flotti Karotti then says “Hasenstark. Lege einen Karottenchip in Dein Fach.” the gist of which is, ‘well done, you get a carrot token’. The tokens are collected in the little slots above each player’s little rabbit.

EASY OPTION: To bypass the German altogether, just get an adult to call out any of the fruit & veg, without the names (e.g. ‘Find the tomato!’), once the music stops. For game play, it doesn’t matter which, as long as it’s a different one each time. The rules booklet has a picture of them all, to remind you which fruit & veg there are. You can ignore everything Flotti Karotti is singing while the kids search, just remember whoever finds it needs to press the button to continue.

Half way through this, the carrot shoots in to the air. You don’t need to know the exact translation, basically, whoever catches the carrot gets a carrot token. The player who found the right card is not meant to take part in the carrot catching part, but we always just make it a free for all otherwise it’s a bit boring, especially when there are only two kids playing. The boys are demonstrating in the photo above how you should hold your hands while waiting for Flotti Karotti to jump. The game is recommended for up to six players, but we found that it works best with three to four players, especially the carrot catching part. Occasionally the carrot won’t jump out,  and he’ll say something like “Hach, jetzt hat mich die Kraft verlassen. Lasst die Ohren nicht hängen.” which roughly translates as ‘I didn’t have any energy to jump, don’t be sad’. You don’t need to know all the variations and exact translations, you’ll notice soon enough if the carrot doesn’t jump out!! Either way, you then push Flotti Karotti back in to his slot, and press the button again to continue to the next round (“Drückt meinen Knopf um weiter zu spielen”).

EASY OPTION: No need to understand any of the German, you will be able to tell by Flotti Karotti’s voice when he’s about to jump. And you will notice soon enough if he doesn’t. Just remember to press the button to continue. The game then continues, with each round following the same three steps, until Flotti Karotti announces “Das Spiel ist vorbei, das habt ihr super gemacht. Zählt eure Karottenchips. Wer die meisten gesammelt hat, gewinnt. Habt ihr Lust nochmal zu spielen? Dann drückt meine Knopf.” which roughly translates as ‘Game over. Well done. Count your carrot tokens. Whoever has collected the most, wins the game. If you’d like to play again, press the button.’ There are around ten rounds in total.

I know it sounds like a lot to take in, but don’t be put off by all the German talking. It’s a lot less complicated than it sounds. You don’t need to know the exact translations for everything, you just need to remember the words for the four different actions at the beginning (and at the end of the day, it doesn’t really matter which of the actions you do, you could call out anything for your kids to do while the music is playing), and the names of the twelve fruit and veg, some of which sound very similar to English. I don’t want to make this post any longer, but if you decide to get this game and need some help with the single player version let me know, as it’s slightly different. I’ve also summarised the EASY OPTION rules (a.k.a. the ‘no need to understand German rules’) again at the end of this post, for quick reference. This game doesn’t come cheap, it’s a bit of a bigger item, which is why it was a joint present for everyone. It’s often on offer via Amazon at a reduced price (my mum got it for around 30 Euros instead of 45 Euros), and last time I checked, it actually cost less to order it from Amazon Germany, including postage to the UK, than to order it from Amazon UK. It’s definitely proved a worthwhile investment for us. It’s given us hours of fun on rainy days, and the boys give it a big, fat thumbs up.

SET UP: Push Flotti Karotti into his slot in the hill, click the rabbits in to their slots, spread the fruit & veg cards face down around the room, have carrot chips close to hand.

STEP 1: Kids do an action in time to the music. To bypass the German, an adult calls out any of the actions (hop, hop on all fours, dance, hop on one leg) or make up your own. Keep going until the music stops.

STEP 2: Once the music stops and Flotti Karotti starts talking, an adult calls out one of the fruit & veg to find. Use the pictures in the rules booklet as a reference to which fruit & veg there are. While Flotto Karotti is chanting (just ignore what he says) the kids search for the right fruit or veg. Whoever finds it presses the button and gets a carrot chip.

STEP 3: Kids get in position to catch the jumping carrot. No need to understand what Flotti Karotti is saying, you will be able to tell from his voice when he is about the jump. Whoever catches him gets a carrot chip. Sometimes he doesn’t jump, but you will notice if that happens. In that case, no one gets a carrot chip.

NEXT ROUND: Push Flotti Karotti back in his slot. Press the button to continue.

END OF GAME: This is the inly slightly tricky bit to recognise, because if you press the button at the end of the game it will all start again, and you will be trapped in a never ending circle of jumping carrots, lol. Basically, if you notice an extra bit of talking after the jumping carrot bit, it’s probably Flotti Karotti telling you the game is over. Listen out for “Das Spiel ist vorbei, das habt ihr super gemacht!”  There are aprox. ten rounds in total in each game. Of course, you can also just stop at any time.