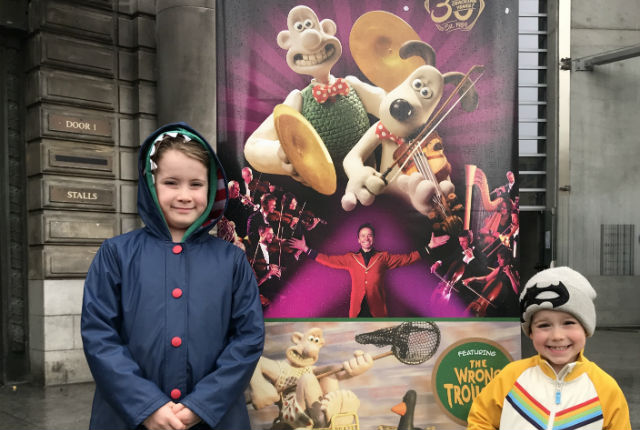 A wee while ago I shared a preview of Wallace & Gromit’s Musical Marvels, which has been touring the UK since mid May. We had been gifted tickets to go and see this, in return for an honest review, and this past weekend, the big day finally arrived and we were off to the Usher Hall in Edinburgh to see the show on stage! 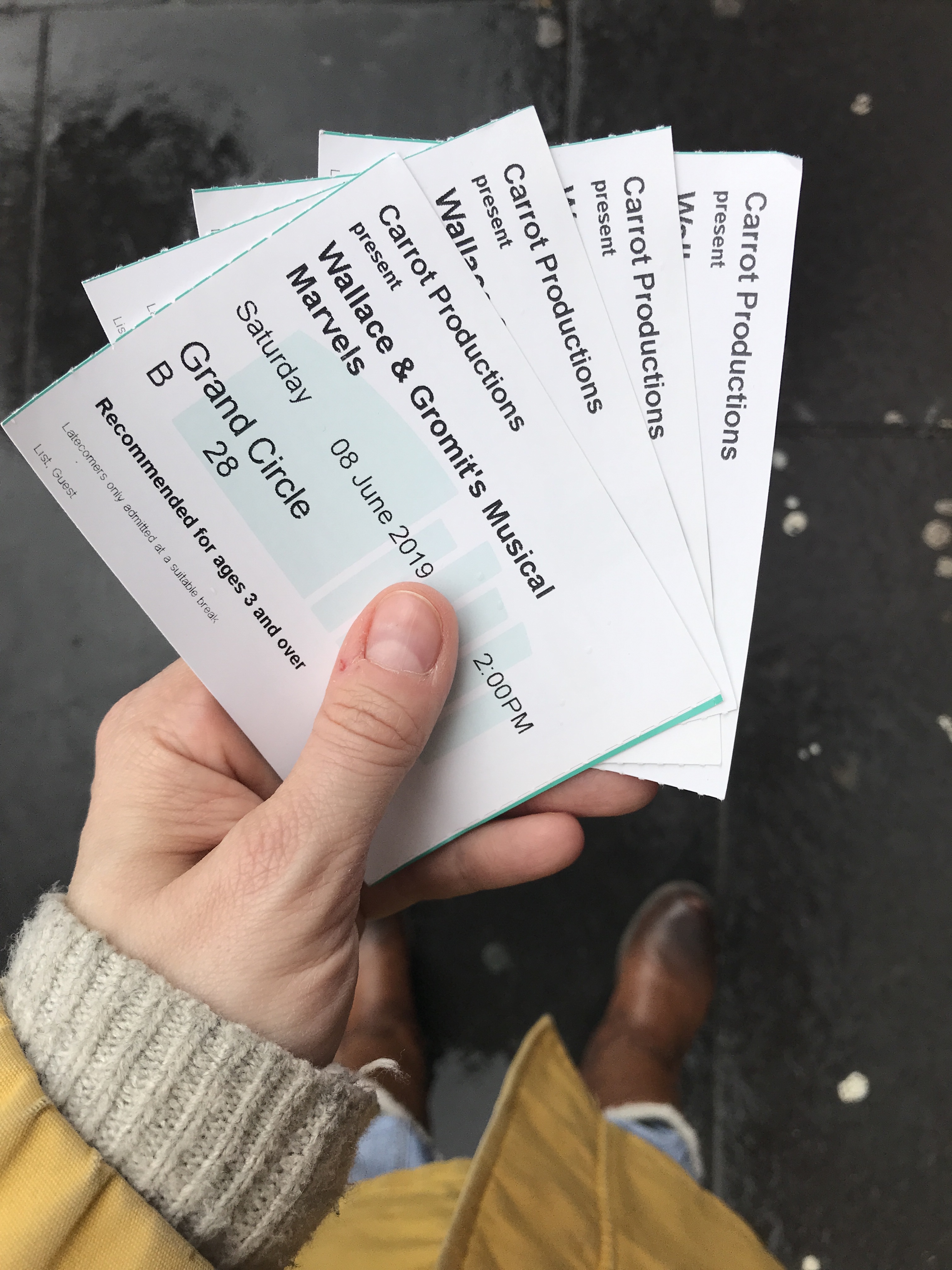 We took our seats about ten minutes before the show started, and watched the musicians trickle in and warm up. The boys thought it was hilarious that some of the musicians had dressed up, e.g. as Shaun the Sheep or blocks of cheese! The musicians then started playing without any further introduction, at the same time that a video started playing on the big screen above them – it showed maestro Matthew Sharp ‘backstage’, apparently having overslept, who then frantically runs around to get ready and eventually exits the video to appear in the auditorium for real, scrambling on to the stage to join the orchestra. It was brilliantly done!

Throughout the first half of the show, Matthew has conversations with Wallace by phone, whom we can see ‘backstage’ with Gromit on the big screen above the orchestra. It’s all really convincing, especially when things happen like Wallace ‘sending’ Matthew a telegram via pneumatic post, which then ‘pops up’ at the other end on stage. Matthew is trying to get hold of the music for Wallace’s masterpiece “Concerto in Ee, Lad”, but as you would expect from Wallace and Gromit, there were plenty of mishaps. Here’s a little sneak peek:

To cover the time while the search for the missing music continues, the orchestra plays some well known pieces – both popular and classical – showing off their talents in the process.The Picture House Orchestra is a professional orchestra comprising some of the country’s top musicians, drawn from orchestras including the Hallé, BBC Philharmonic, BBC Concert and BBC Scottish amongst others. The orchestra is conducted by the BBC Symphony Orchestra’s Steve Magee, an expert in syncing music to film with split second precision.

First up was an absolutely incredible rendition of Bohemian Rhapsody, with Matthew (who is in face a well-established cellist and singer) on cello and vocals. My favourite piece after that was “Cut to the Chase”, specially written for the show by Daniel Whibley, which accompanied a medley of the best Wallace & Gromit chase scenes and had perfectly timed bangs and booms to coincide with shots and explosions in the medley. There was another medley of Wallace’s romances too. Other pieces performed included Mozart’s Overture to The Marriage of Figaro, Debussy’s Clair de Lune and a Baroque medley of Bach, Handel and Vivaldi. Another memorable moment, was the performance of Stevie Wonder’s “Don’t You Worry About A Thing”, during which Matthew introduces and highlights each section of the orchestra via a film camera projecting on to the big screen. It was a great way to showcase both the versatility of the orchestra and the fun side of classical instruments. The first half of the show ends with the much-anticipated performance of Wallace’s “Concerto in Ee, Lad” – or does it? I don’t want to give too much away, but as with the rest of the show this was brilliantly executed. 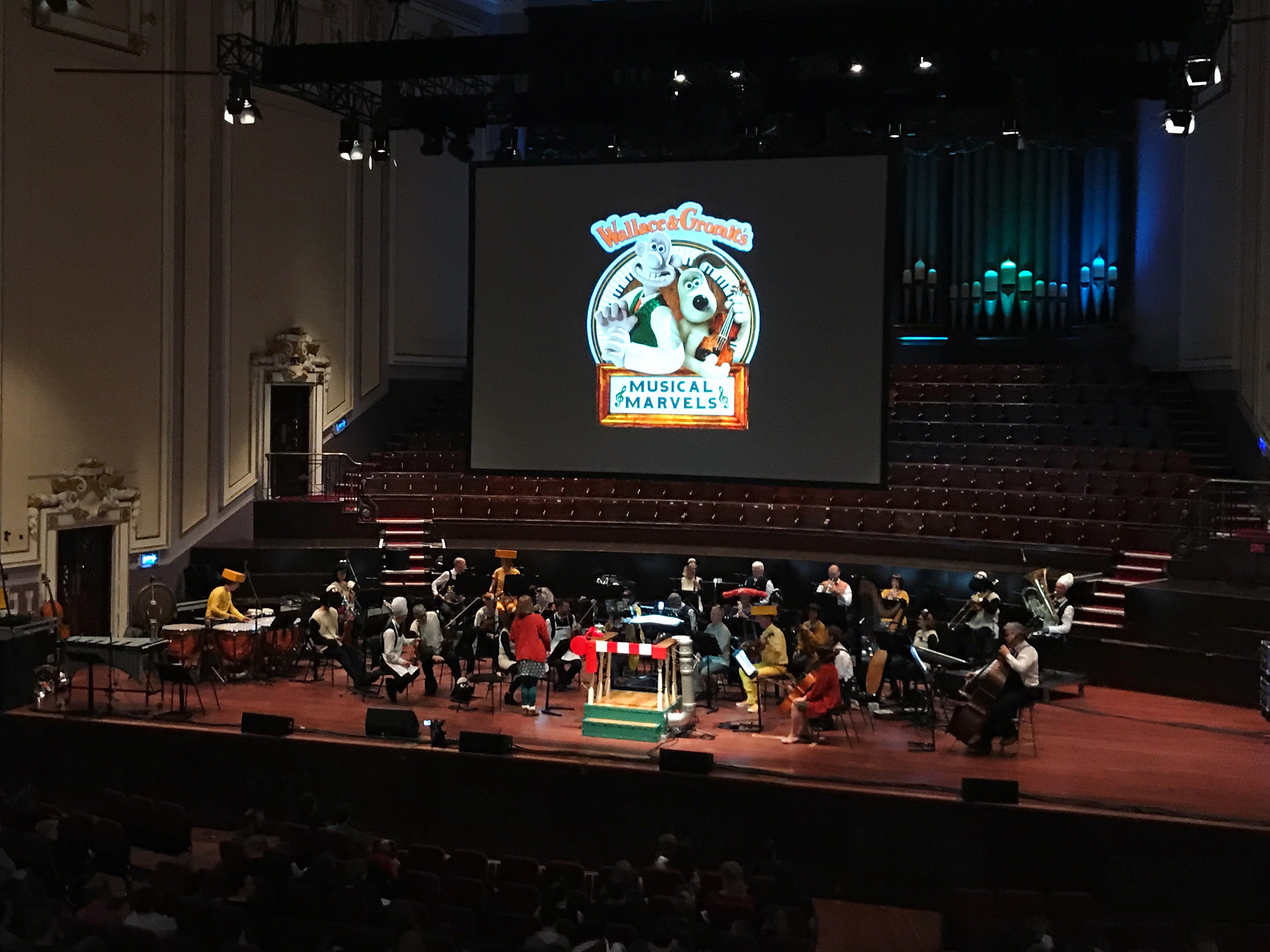 After the interval, the second half of the show is a screening of the Wallace & Gromit 1993 hit “The Wrong Trousers”, accompanied by a live film score from the orchestra. The live music blended in with the film so well, you sometimes forgot they were even there! And everyone was clapping along to the Wallace & Gromit theme tune at the end.

We all really enjoyed Wallace & Gromit’s Musical Marvels, children and adults alike. My 4 year old said he liked “Detective Dog” best (i.e. Gromit solving the case in “The Wrong Trousers”) and my 8 year old said “I really liked the music. I thought it was really good!” – I’m hoping it may encourage him to play his cello more often, now that he has seen were practice can get you. The whole show, including the interval, lasted around 90 minutes, which was just the right amount of time for my 4 year old (the ice cream in the interval helped too!) The atmosphere of the show was fairly relaxed, from the silly costumes of the musicians (see afore mentioned cheese) to the fact they really seemed to be having fun and enjoying themselves as they were playing. They really managed to make orchestral music accessible to children, and showed it doesn’t have to be stuffy or boring – it can be lighthearted and fun too! 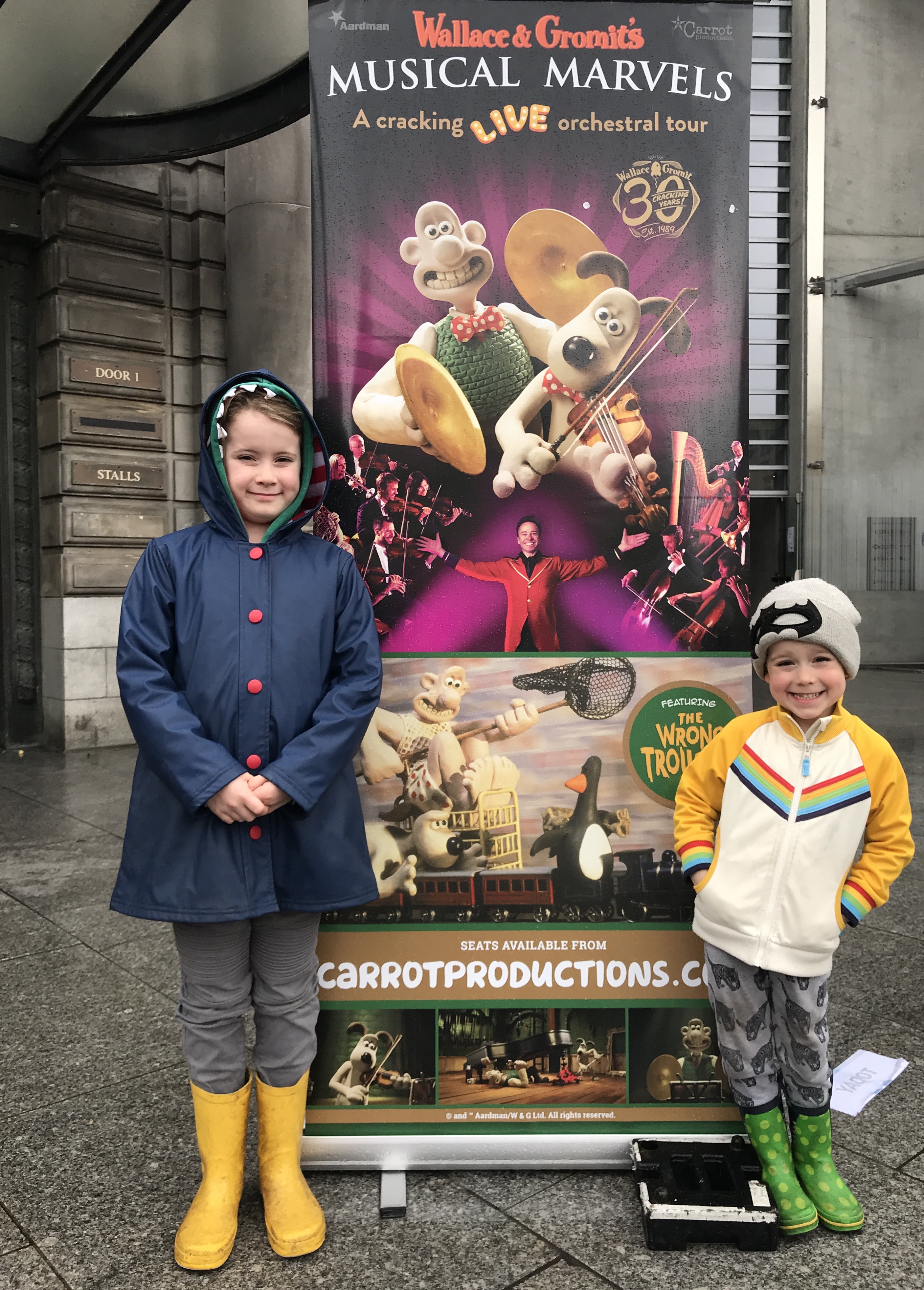 Wallace & Gromit’s Musical Marvels, which is produced by the innovative Carrot Productions, has finished its current run, but it’s returning to Edinburgh on 15th & 16th August for the Edinburgh Festival Fringe. So if you are in or near Edinburgh at that time don’t miss your chance to catch it then! You can find further info on the show’s website. Carrot Productions will also be touring with their show of The Snowman later this year in December. Sadly, it doesn’t look like they will be coming to Edinburgh, but if it’s anywhere near as great as Wallace & Gromit then I’m sure it will be fabulous to see. Again, all info on this is available on their website.

Disclosure: We were gifted a free family ticket to see Wallace & Gromit’s Musical Marvels, in return for an honest review. However, all opinions are our own.