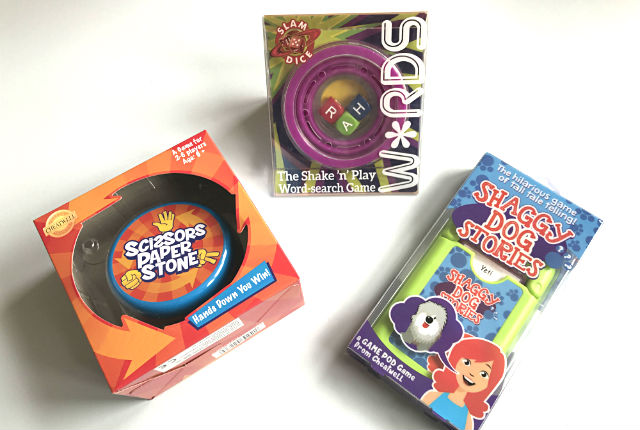 Yesterday was officially the first day of the summer holidays here in Edinburgh, and we are all looking forward to a little time away, so it’s the perfect opportunity to share some great travel games with you. We were recently sent a wee bundle of games from Cheatwell Games for review, and we have been enjoying playing them over the last couple of weeks. The only difficult decision is which of them to take on holiday with us – but they are all so small and handy, maybe we can fit all three of them in! 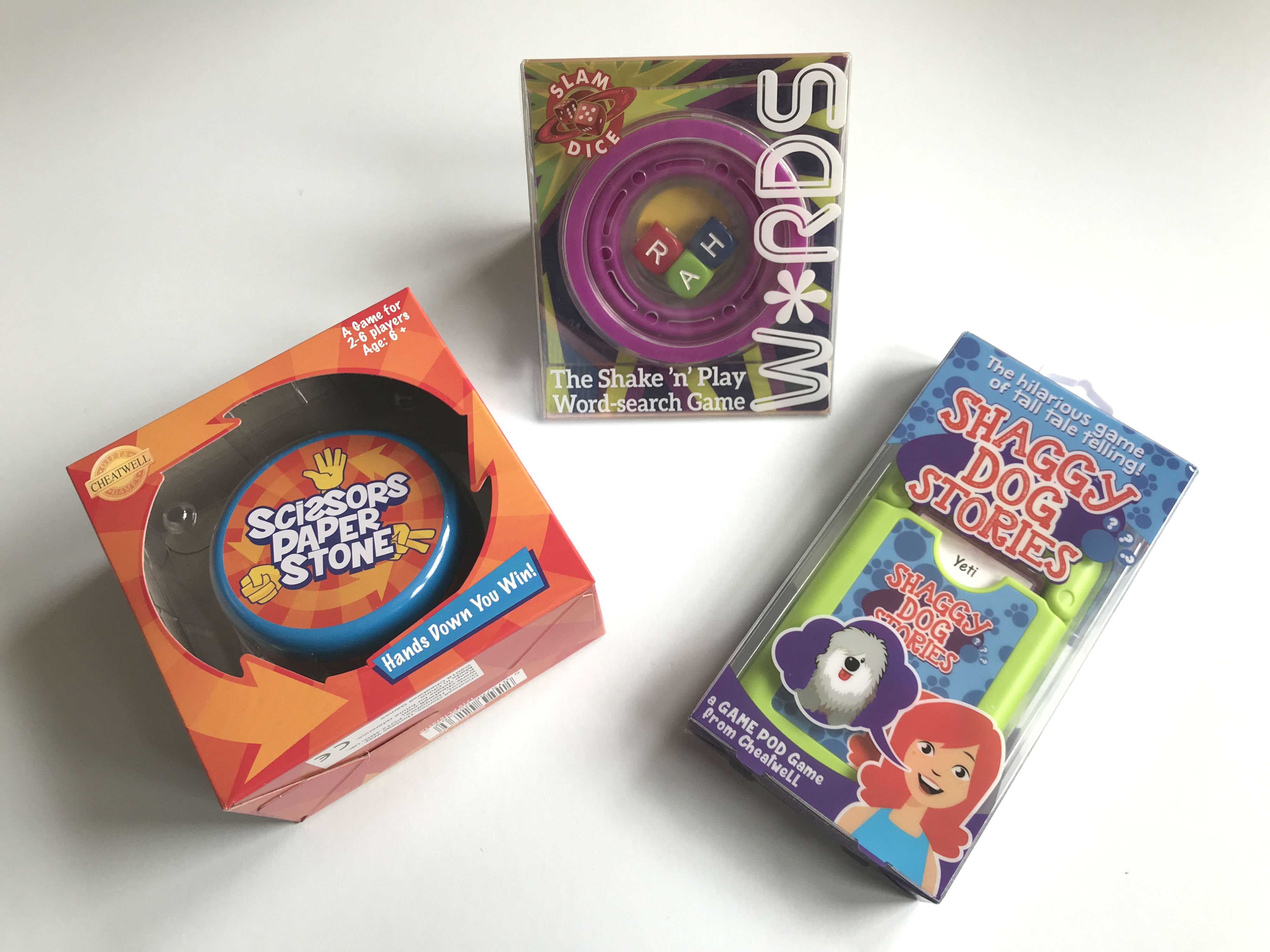 Disclosure: We were sent free samples of these three games by Cheatwell Games in return for an honest review. All opinions are our own.

First up, we have Scissors, Paper, Stone, which comes in a neat little tin and is based on the popular kids playground game ‘Rock, Paper Scissors’.  It’s for 2-6 players, and the instructions are really simple. 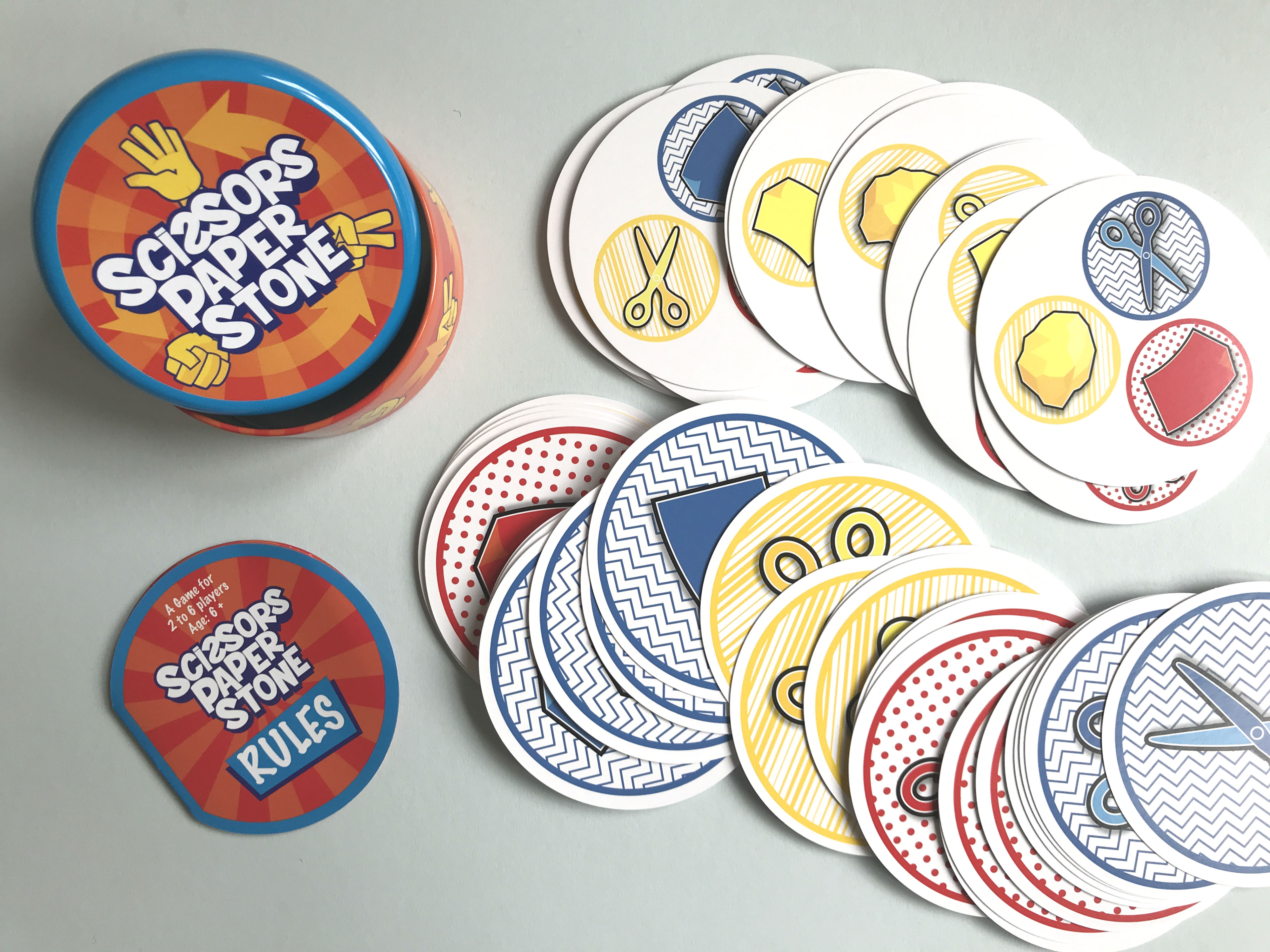 Each of the cards has all three symbols – scissors, paper and stone – on the front, each in a different colour i.e. red, yellow or blue, and just one of the three symbols in any of the three colours on the back. To prepare for the game, shuffle the cards and place them face down on the table, i.e. with the side that shows just one symbol pointing up. 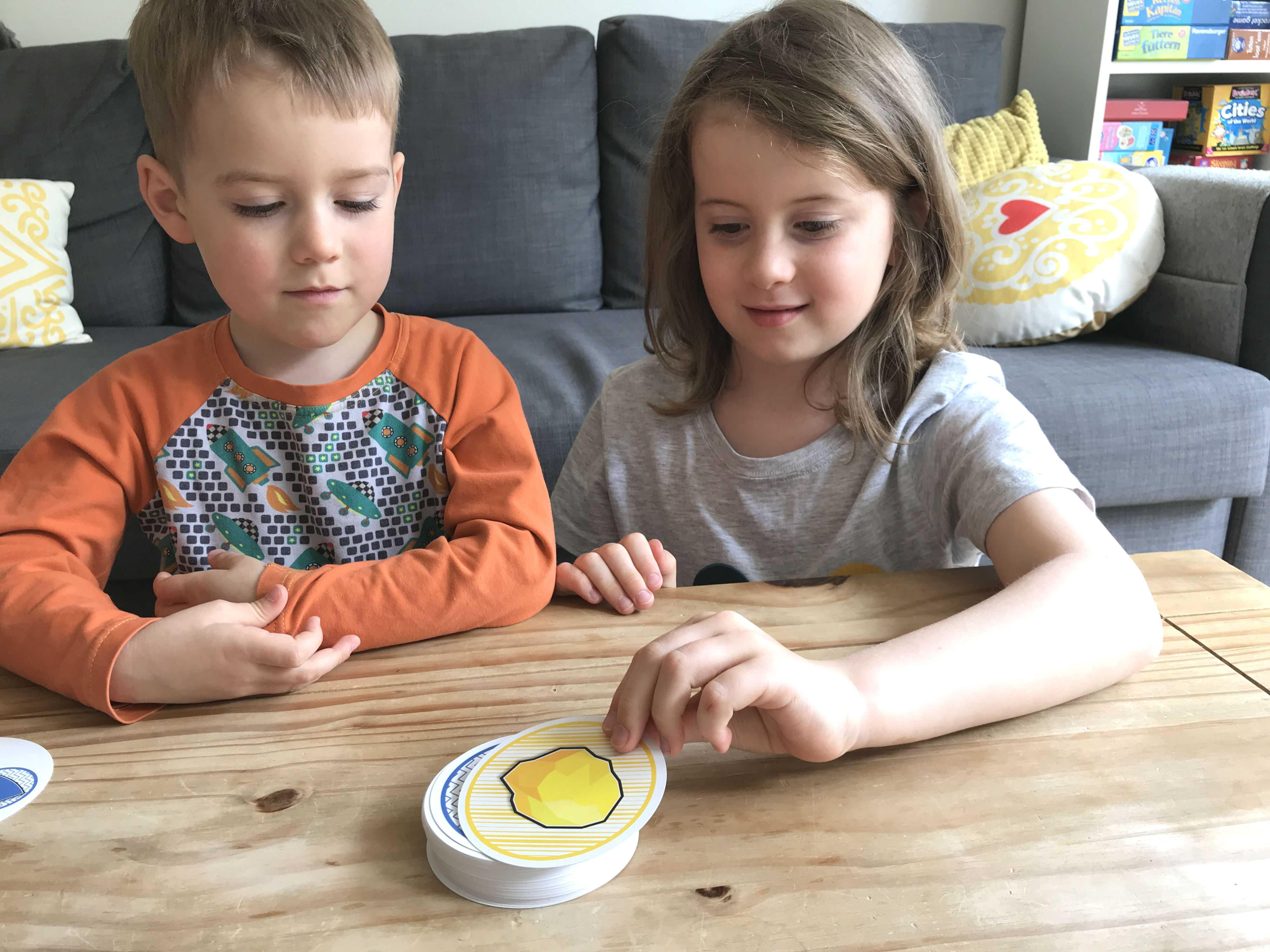 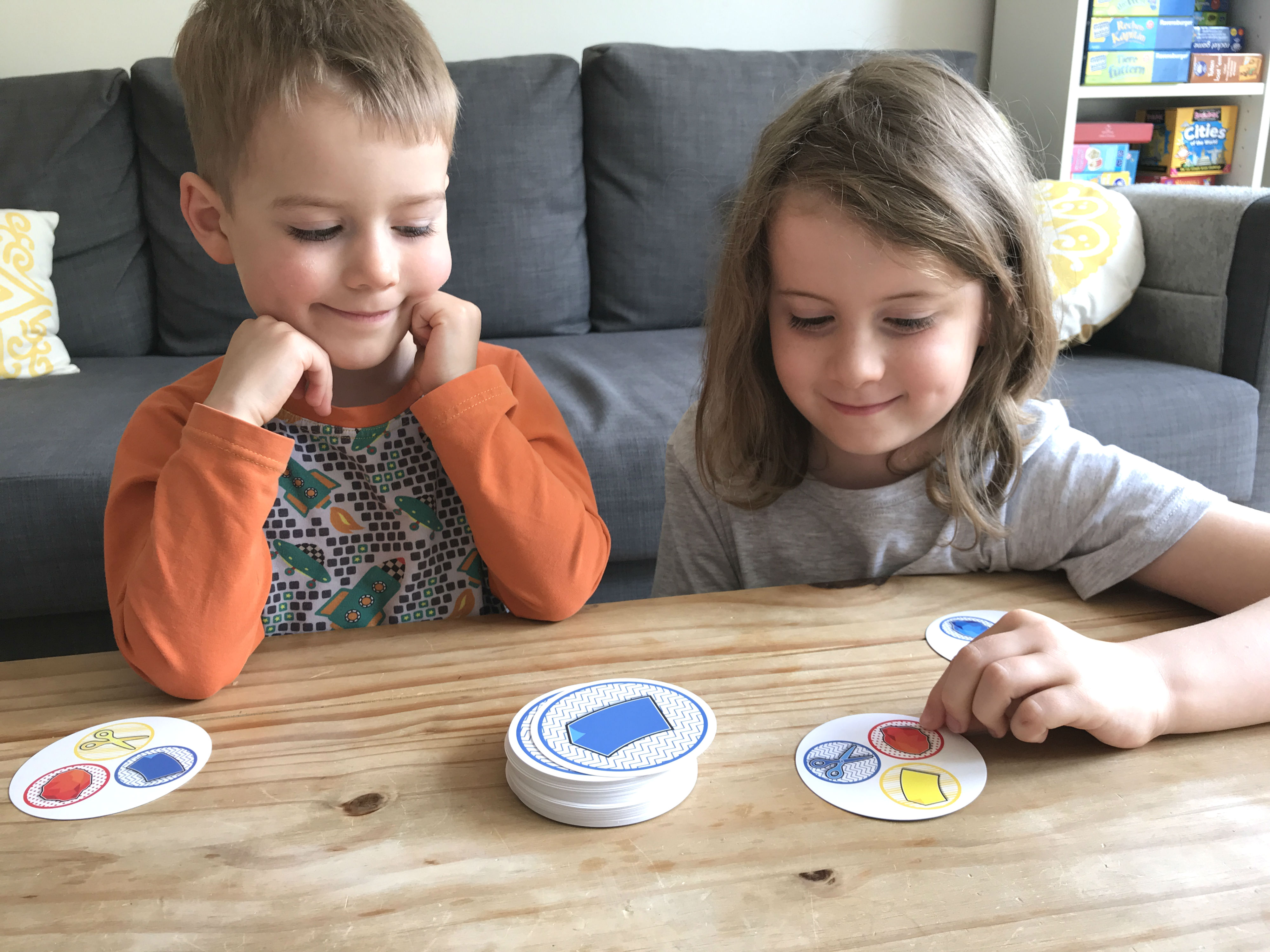 To play, flip the top card over and place it face up – with the three symbols showing – on the table next to the pile. The two symbols that are the same colour, i.e. the symbol on the pile and the matching colour symbol on the flipped card, are the ones that duel: scissors beat paper, paper beats stone, stone beats scissors. Whoever is first to figure it out slams their hand on the flipped card with the appropriate scissors, paper or rock gesture. 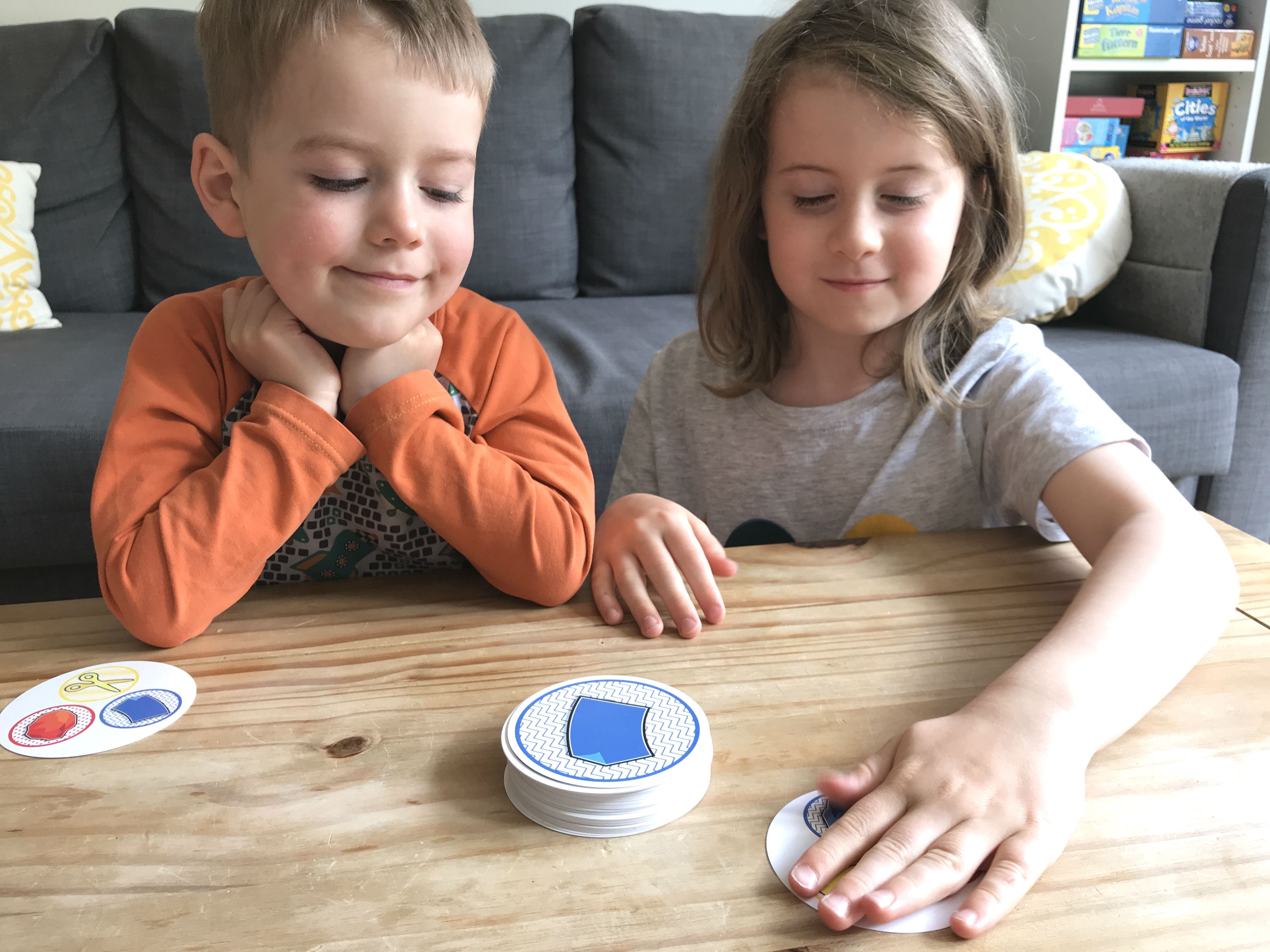 For example, if the top of the pile shows blue paper, and the flipped card shows blue scissors, then paper and scissors are the symbols that duel, and scissors wins as it beats paper. Mr Fox is expertly demonstrating here what you have to do: 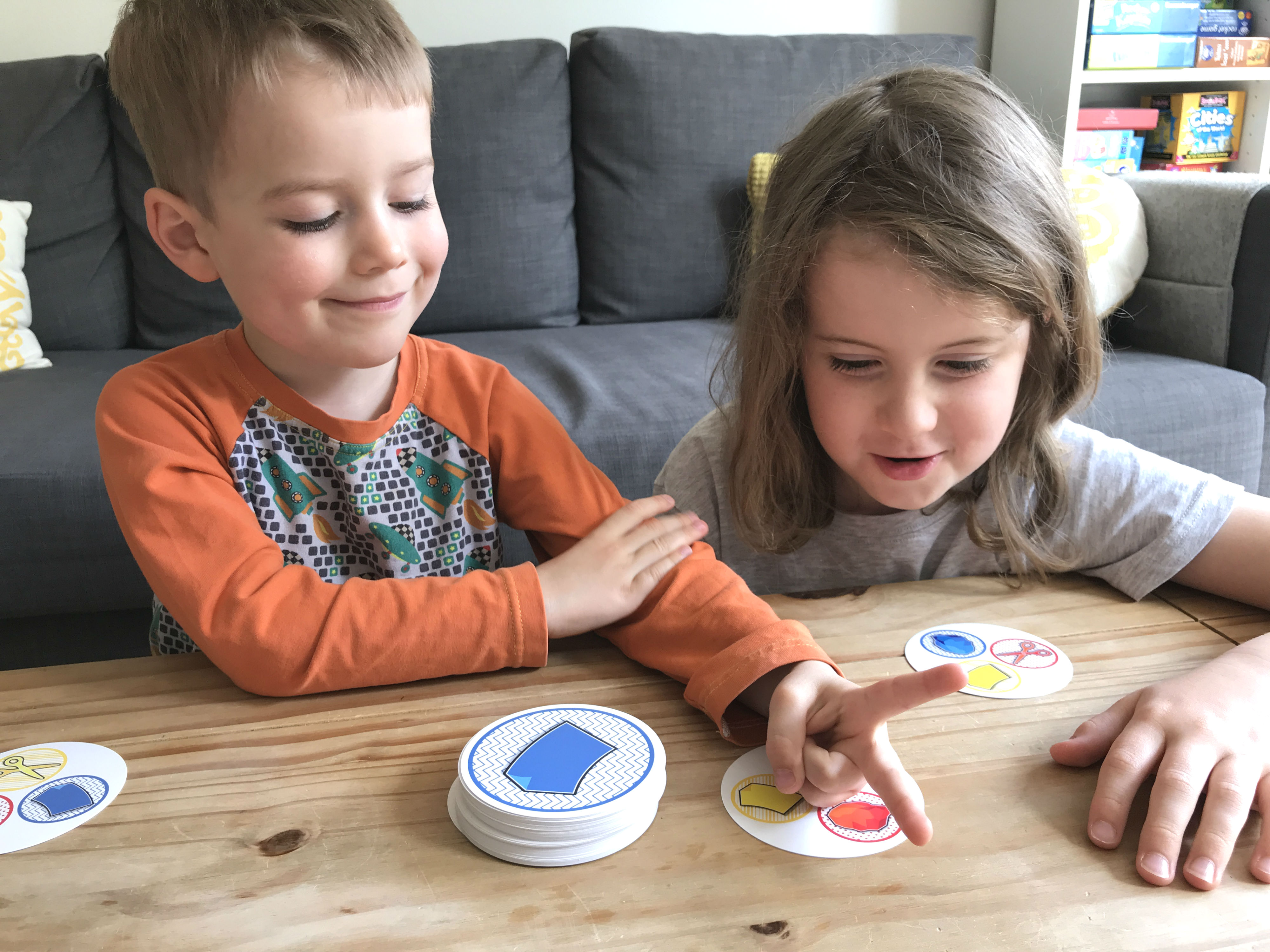 If there are two matching symbols in the same colour on the two cards – e.g. blue paper on both, as shown in the photo below – then whoever is first to clap their hands twice wins the card. 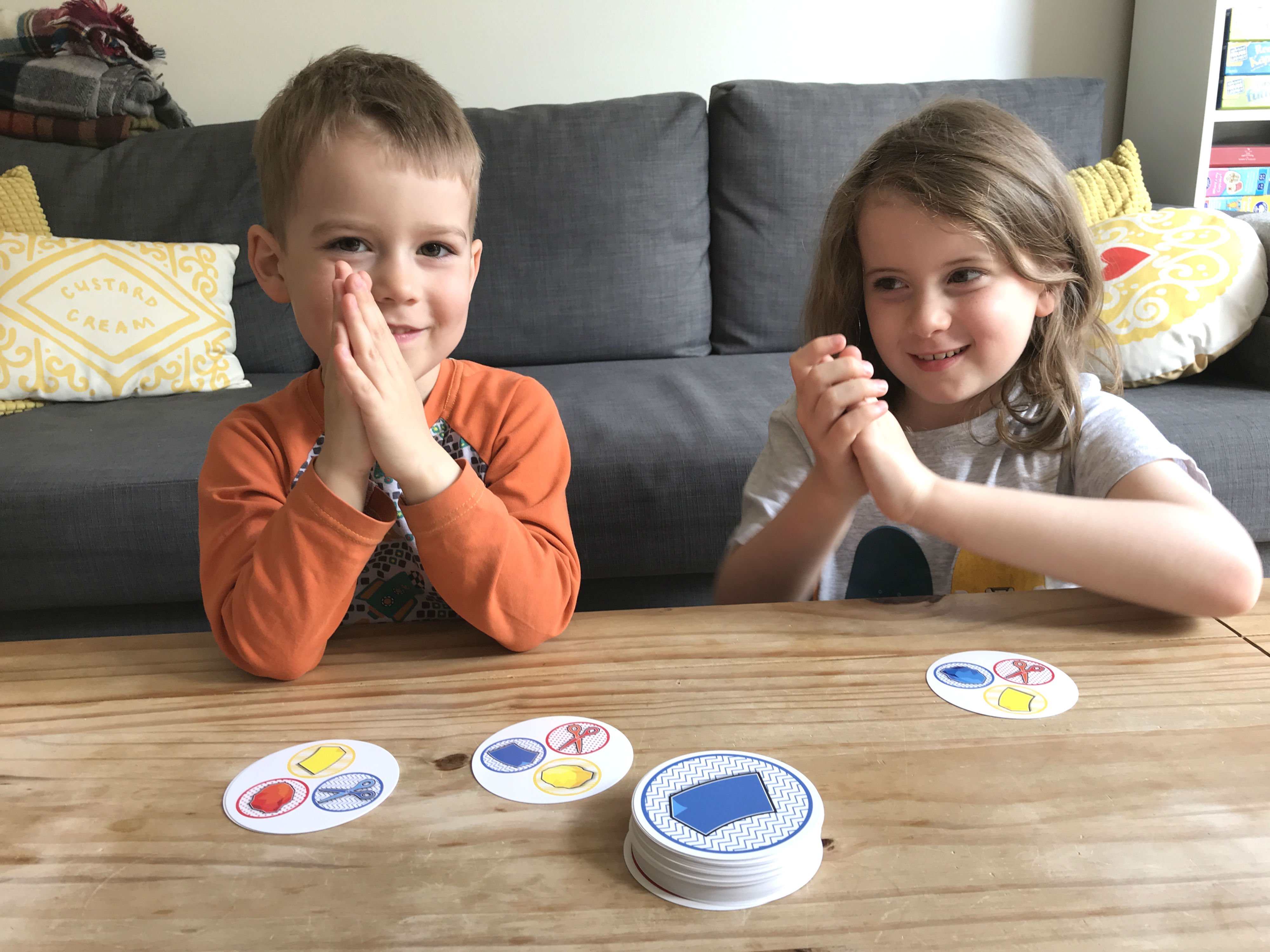 The winner of the round gets to keep the flipped card. The object of the game is to collect the most cards. You can either play through the whole pile, or set a number of rounds to play in advance. This game is recommended for ages 6+ but my 4 year old is actually the reigning family champion! 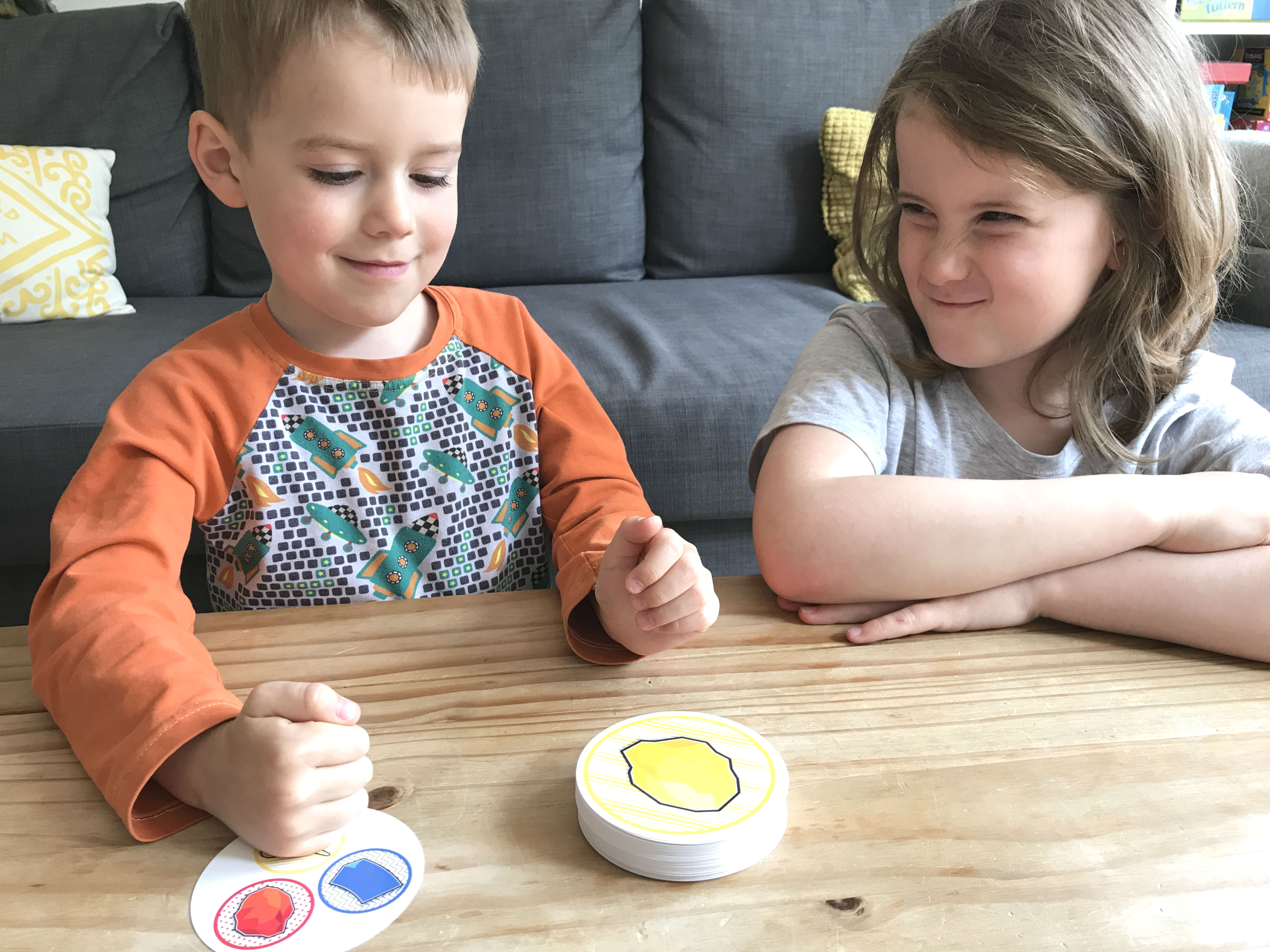 The second game is a word-search game for two or more players aged 8+. All you need to play it, is the collapsable rubber cup, which contains three dice that all have different letters on each side. 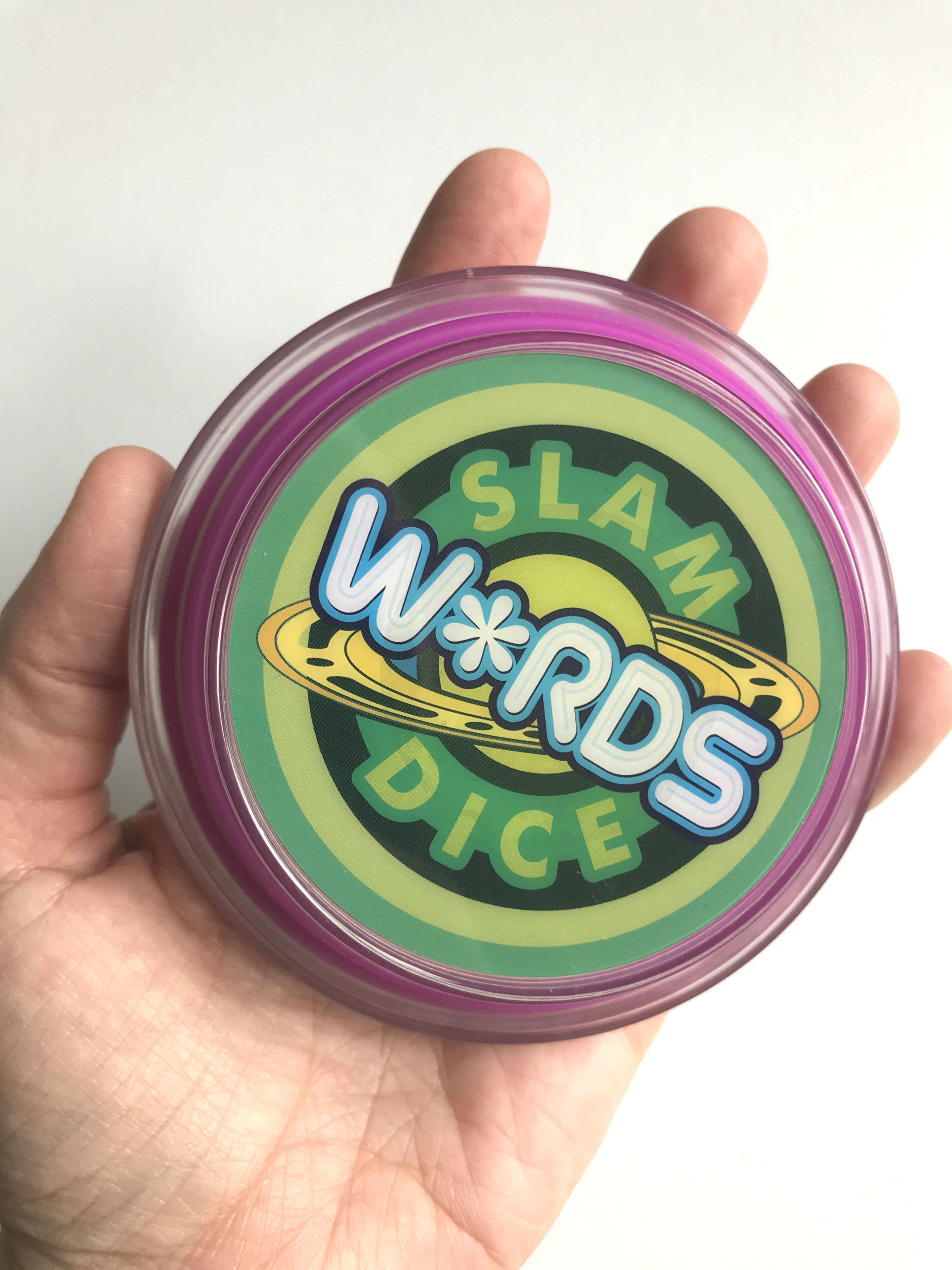 Each player starts out with five lives (you can either keep score of these on a piece of paper, or give everyone five tokens such as coins, or maybe shells, stone or pinecones if you are out and about). You shake the dice, then slam down on the cup which makes it collapse and traps the three dice in place. 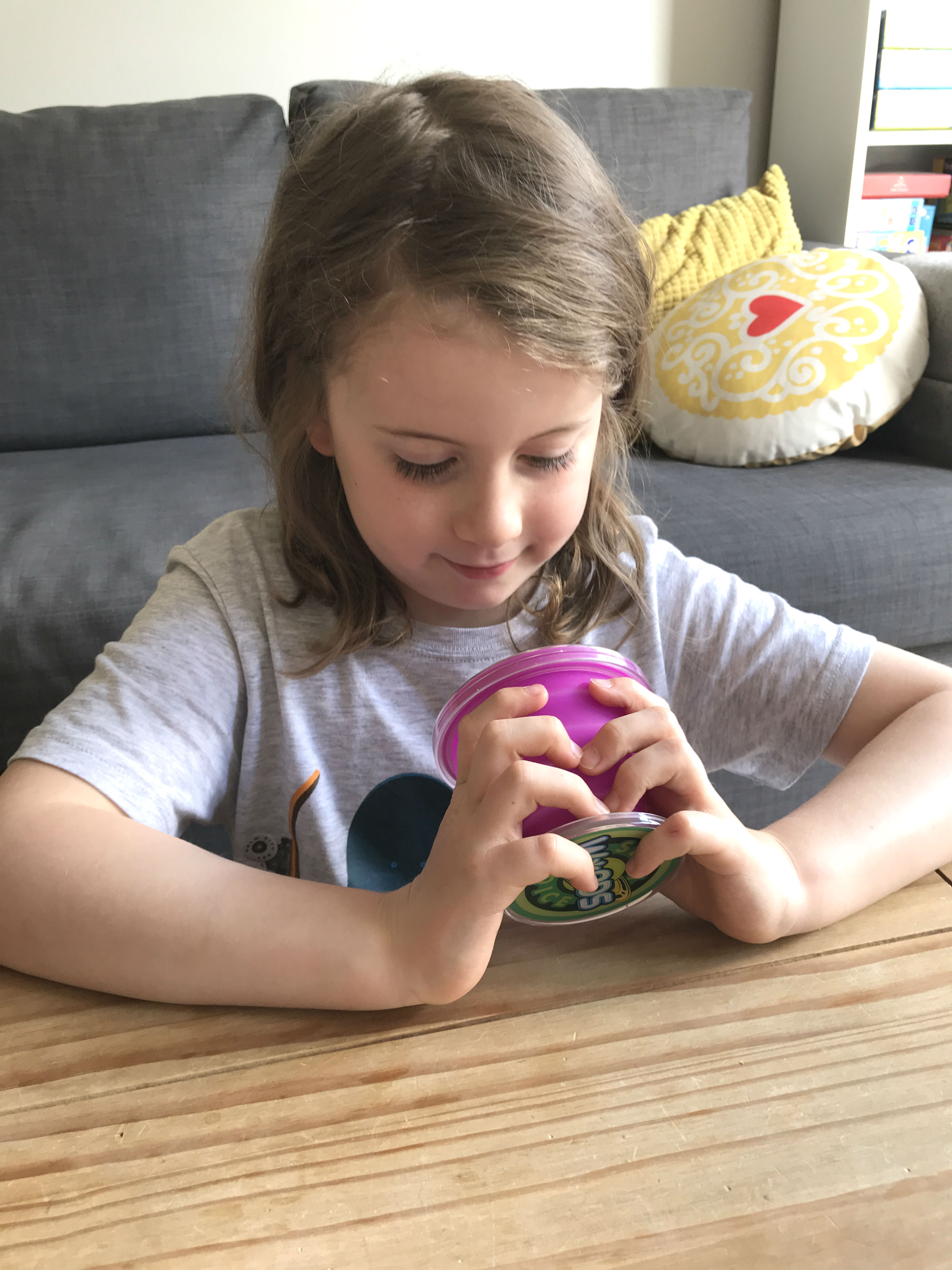 You now need to use the three letters that are showing to make words – you take it in turns to call out a word that must contain all three letters, e.g. for U-N-D you could have words like underneath, understand, dunce, sound, round etc. If one of the dice shows a star, then you use that as a joker in place of any letter. 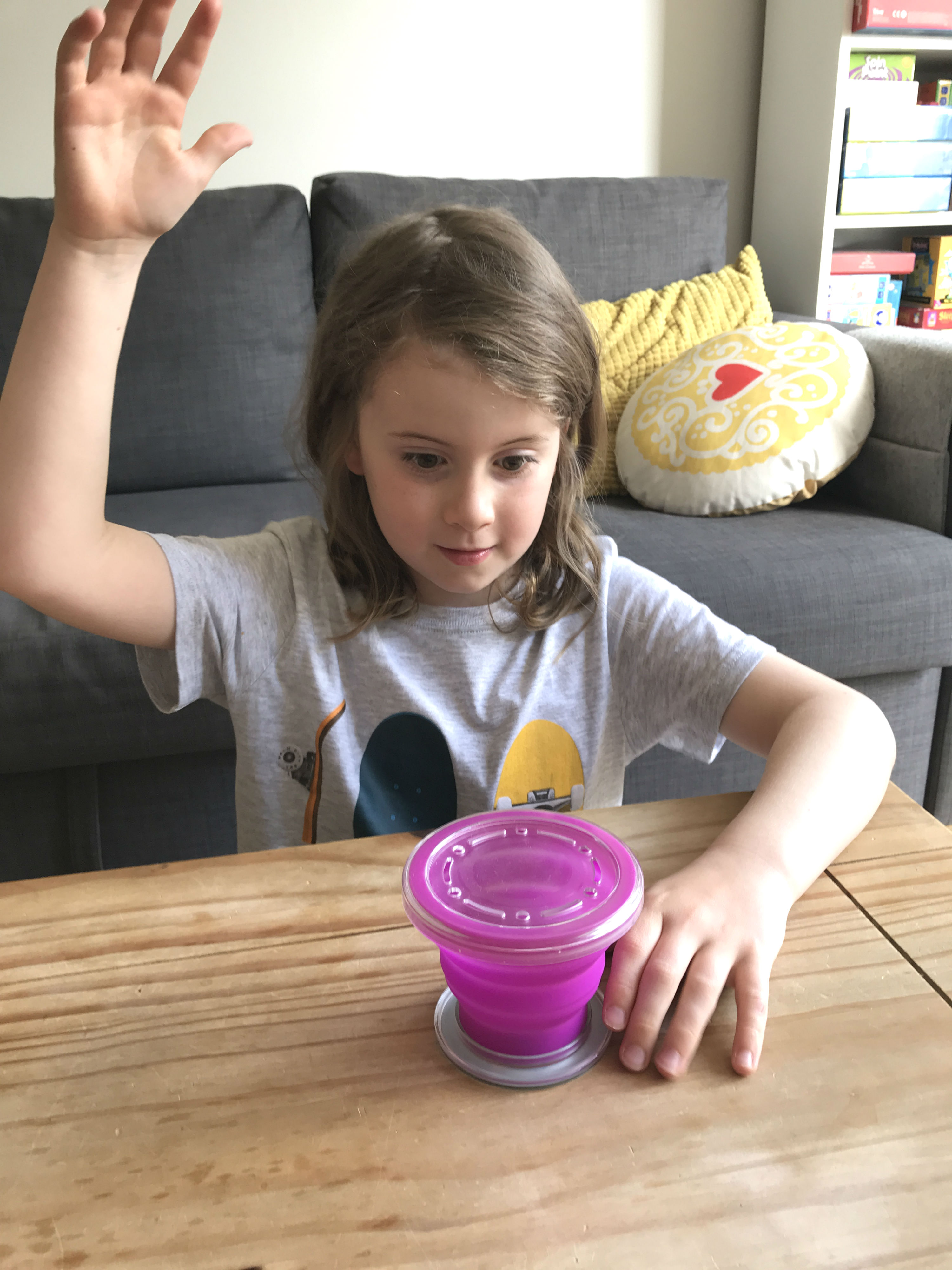 Whenever a player takes too long on their turn, repeats a word, or calls out a word that doesn’t include the three letters, they lose a life. You can give players different limits on time, to allow for different ages and abilities, or you could also just play without the time limit and only give penalties for repetitions of false words. We found that our 8 year old started to panic when he was under time pressure, and then his mind just went blank, so we did away with the time limit as the game is meant to be fun not stressful. We also allow him a couple of extra lives, to stand a chance against mummy and daddy. 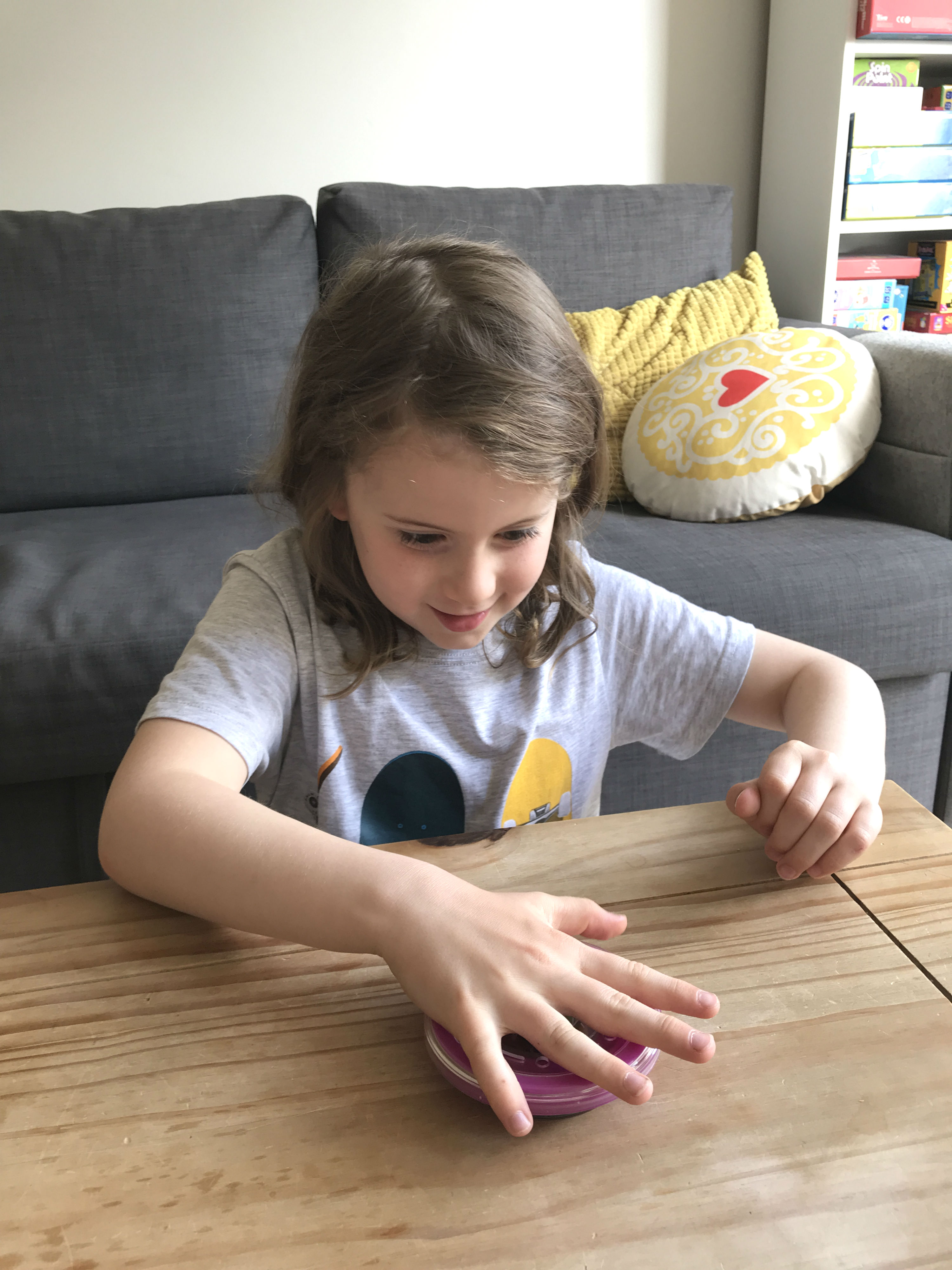 When a player loses a life, the dice are re-shaken and a new round starts. If someone loses all their lives, they drop out of the game. The last person left in the game is the winner. 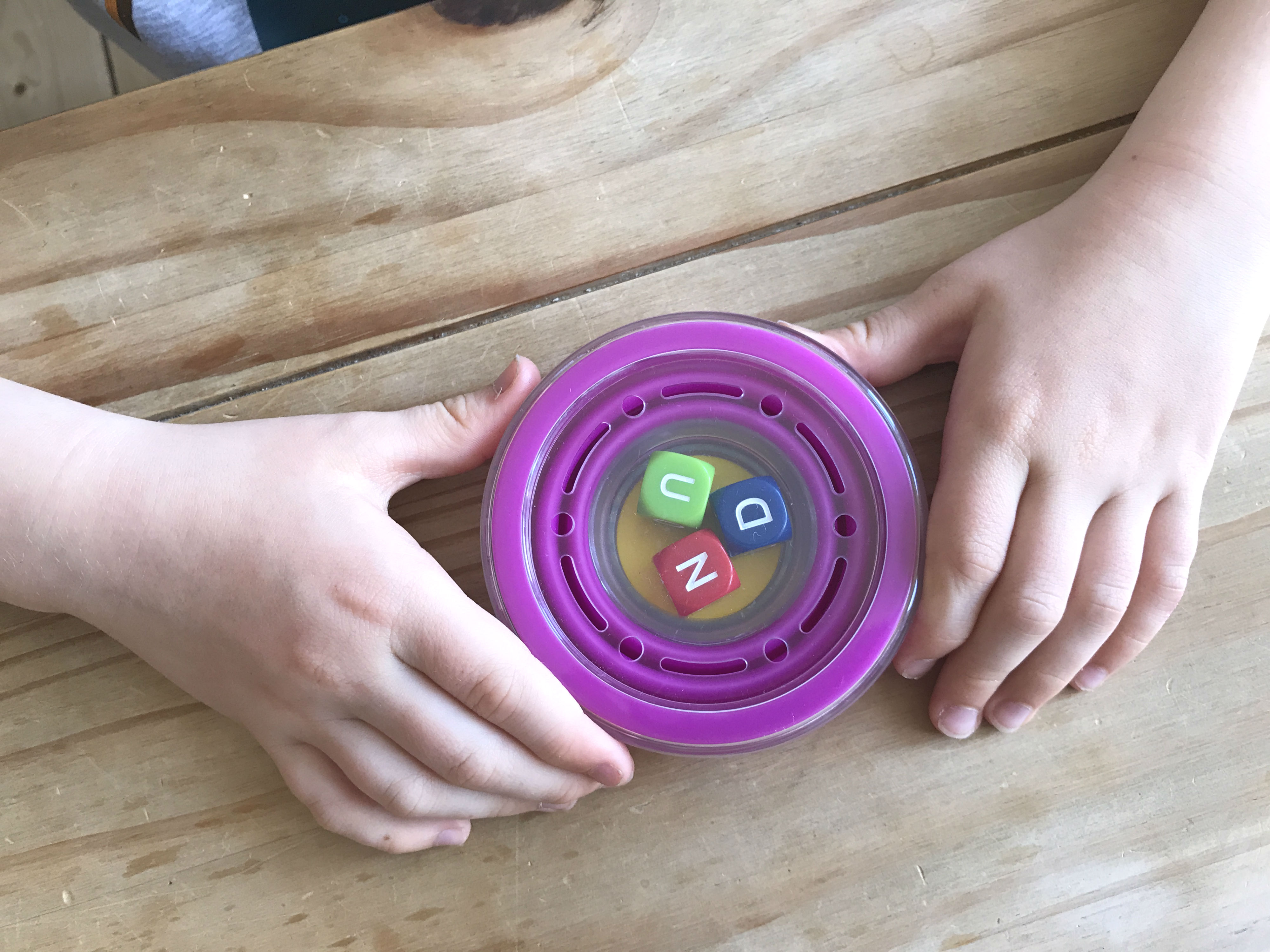 This game has been really good for my 8 year old’s spelling, which is something he generally struggles with, but he’s been doing really well trying to think of relevant words. This game is also great for taking with you on the go, as in it’s collapsed state the cup takes up hardly any space at all, I can even fit it in the palm of my hand. It is a little noisy though, so perhaps better for playing in the car than on a plane or train. 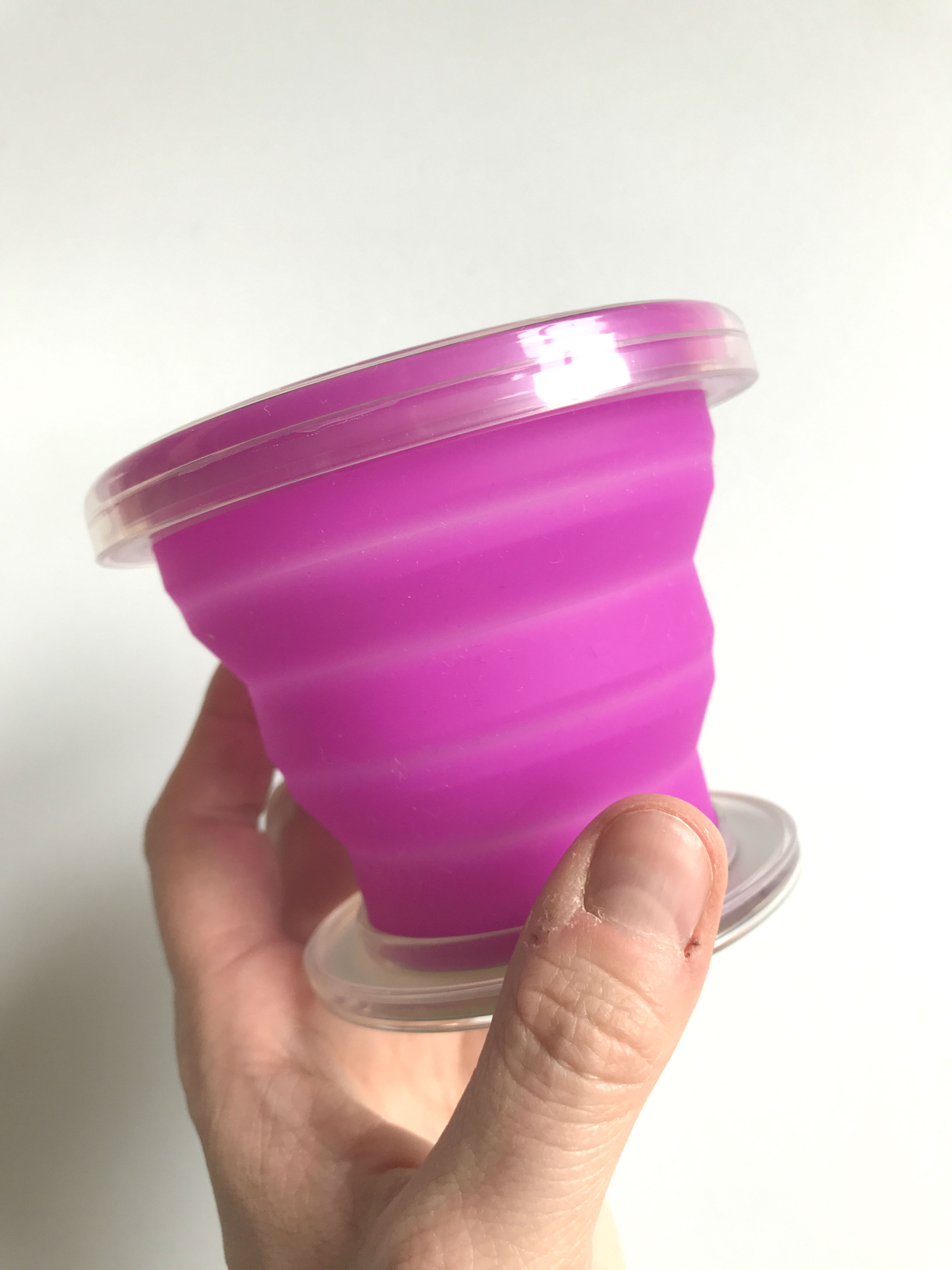 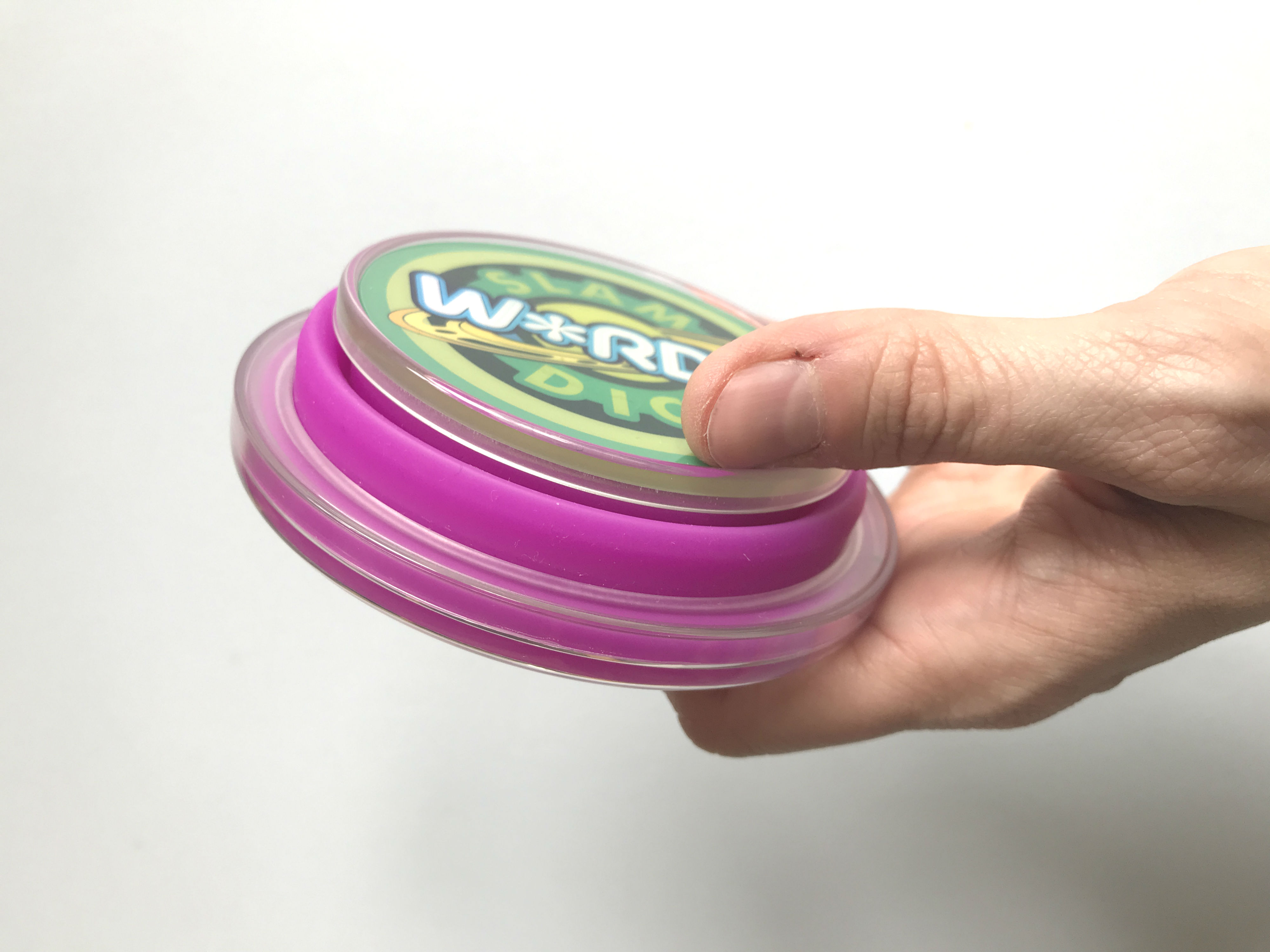 And, finally, there’s Shaggy Dog Stories, which is a card game that encourages creative thinking. Each of the double sided cards has four sets of words on it, with three words in each set. The challenge is to create a story using a set of words, and the other players have to guess what those three words are. The more elaborate you make your story, the harder it will be to guess. The other players can confer and jointly try to guess – only three guesses in total are allowed, and for each word that isn’t guessed, the storyteller gets a point. The winner is the first player to reach 7 points. 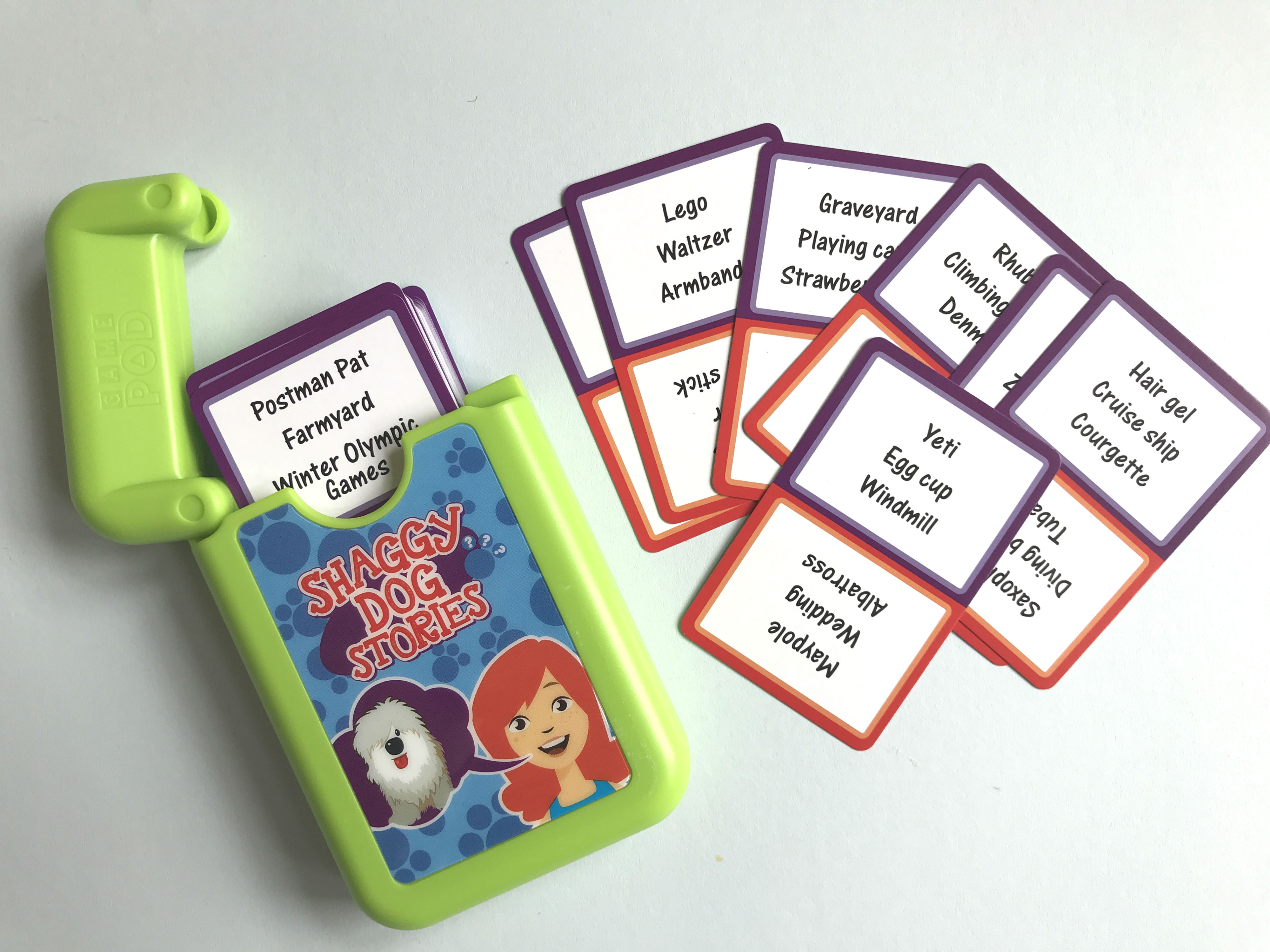 There are a couple of other wee rules. Firstly, it’s suggested to play with with a timer, giving the storyteller just 60 seconds to create and tell their tale. For reasons given above, we have been playing this without a timer. Secondly, you can’t get away with trying to hide your words in a list – lists of more than two items are not allowed! Because that would be too easy. And, finally, if the storyteller doesn’t use all of their three words in their story, they lose a point for each unused word. This is probably more relevant if you play with a timer. 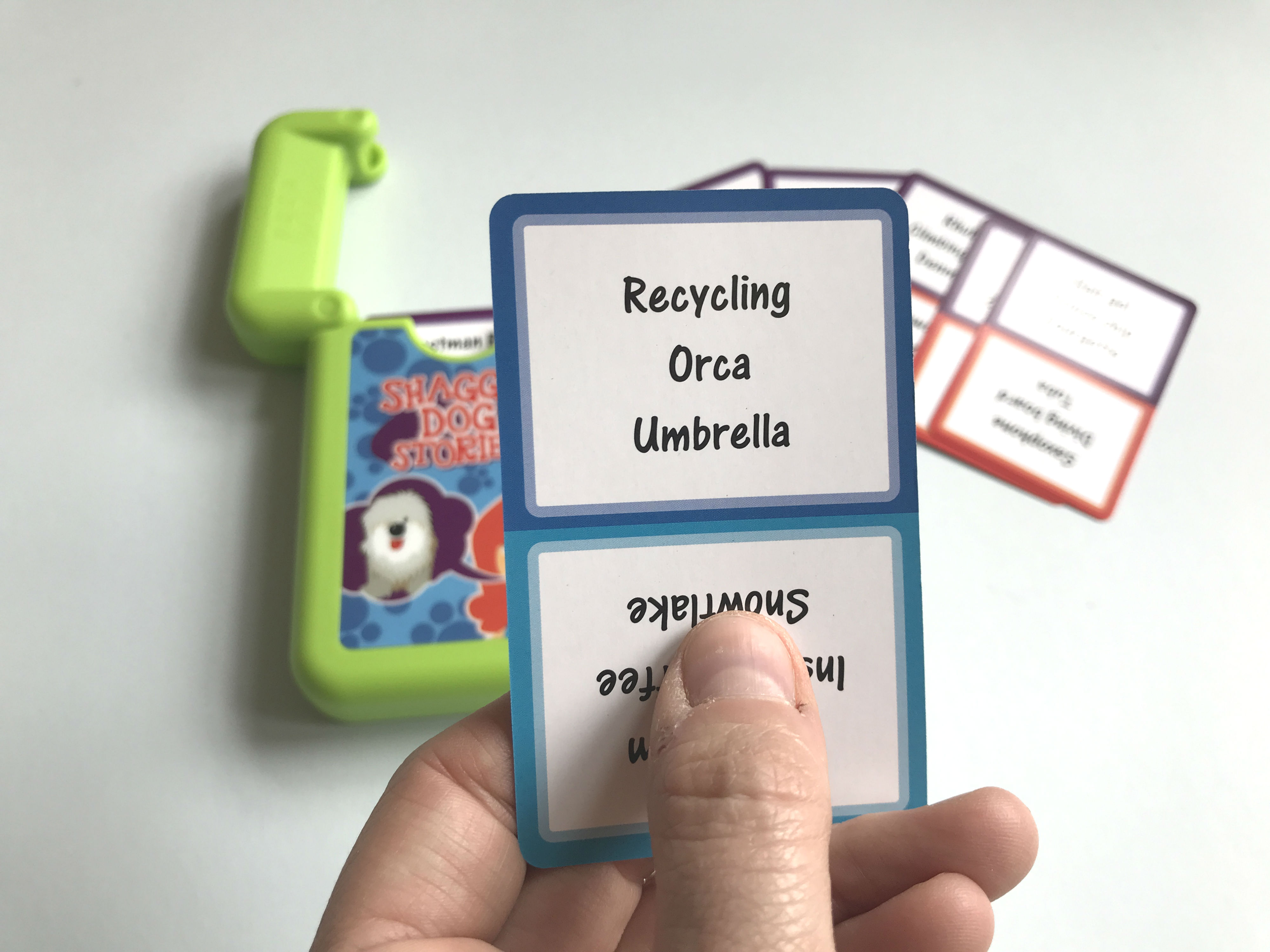 This is a brilliant game for on the go whether you are travelling by train, plane or automobile, not only because it takes up little space, but also because it’s quiet – no shaking or slamming, and it doesn’t require anything to be set up that could go flying all over the place, just one card at a time used by the storyteller while the rest remains in the box. It’s recommended for ages 6+ which seems about right, as you’ll need to be able to read the words on the cards. 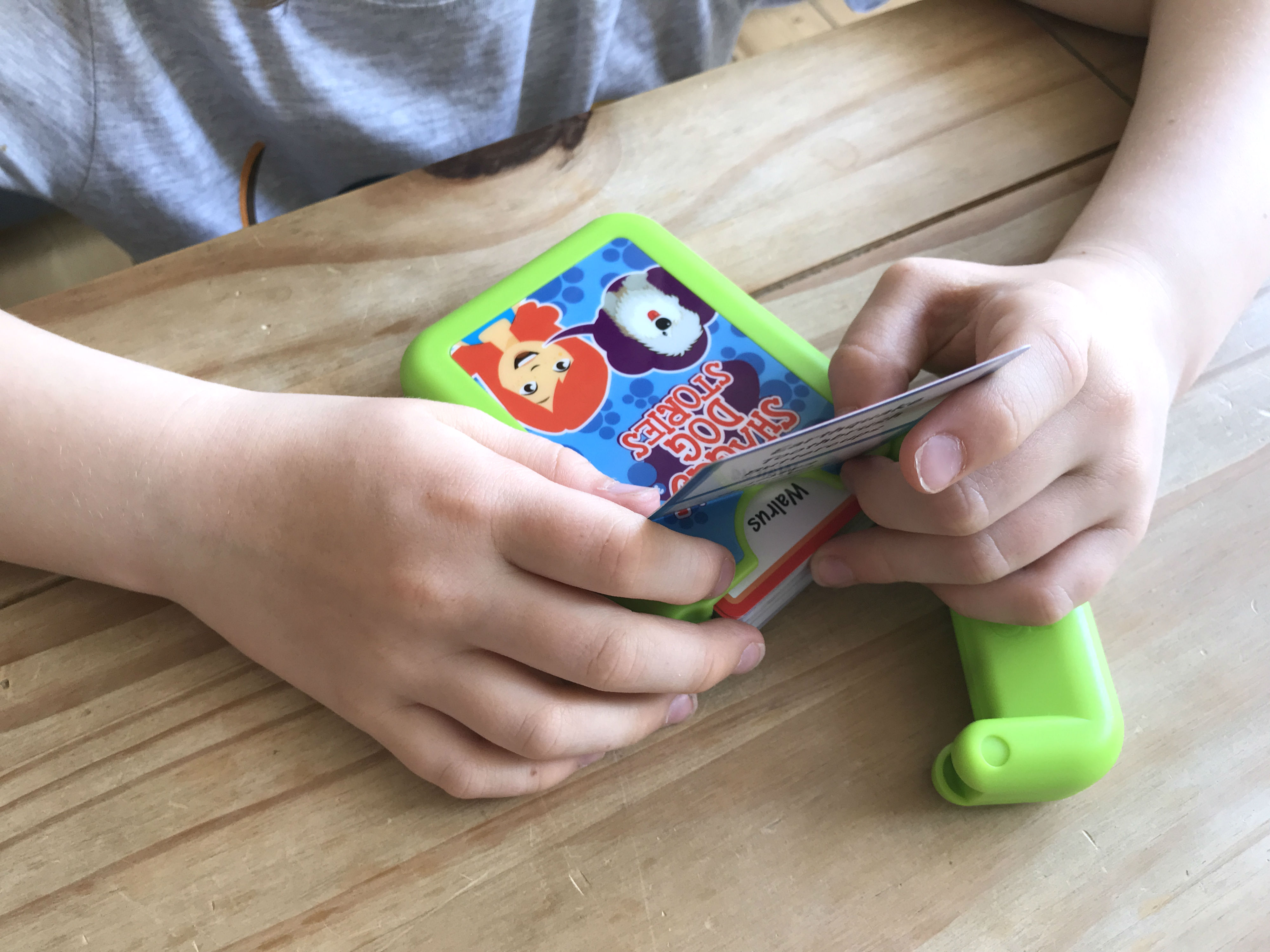 Here’s a story my 8 year old created – can you guess what his 3 words were?

Once upon a time there was three little pigs, and they beat the big bad wolf and cooked him up. Then they went in to outer space with a huge spaceship and they danced around on Mars until their feet were tired. They found some seaweed which was super unexpected in the middle of space. They took the seaweed back home to cook up with the wolf stew. Then they went over to the shops – they did not use the traffic lights – and they bought even more seaweed. Then they went to see Little Red Riding Hood to have wolf-seaweed stew together. The end.

There are 55 cards in the pack, each with four sets of words, so with over 200 stories waiting to be created this game will keep you going for a while! 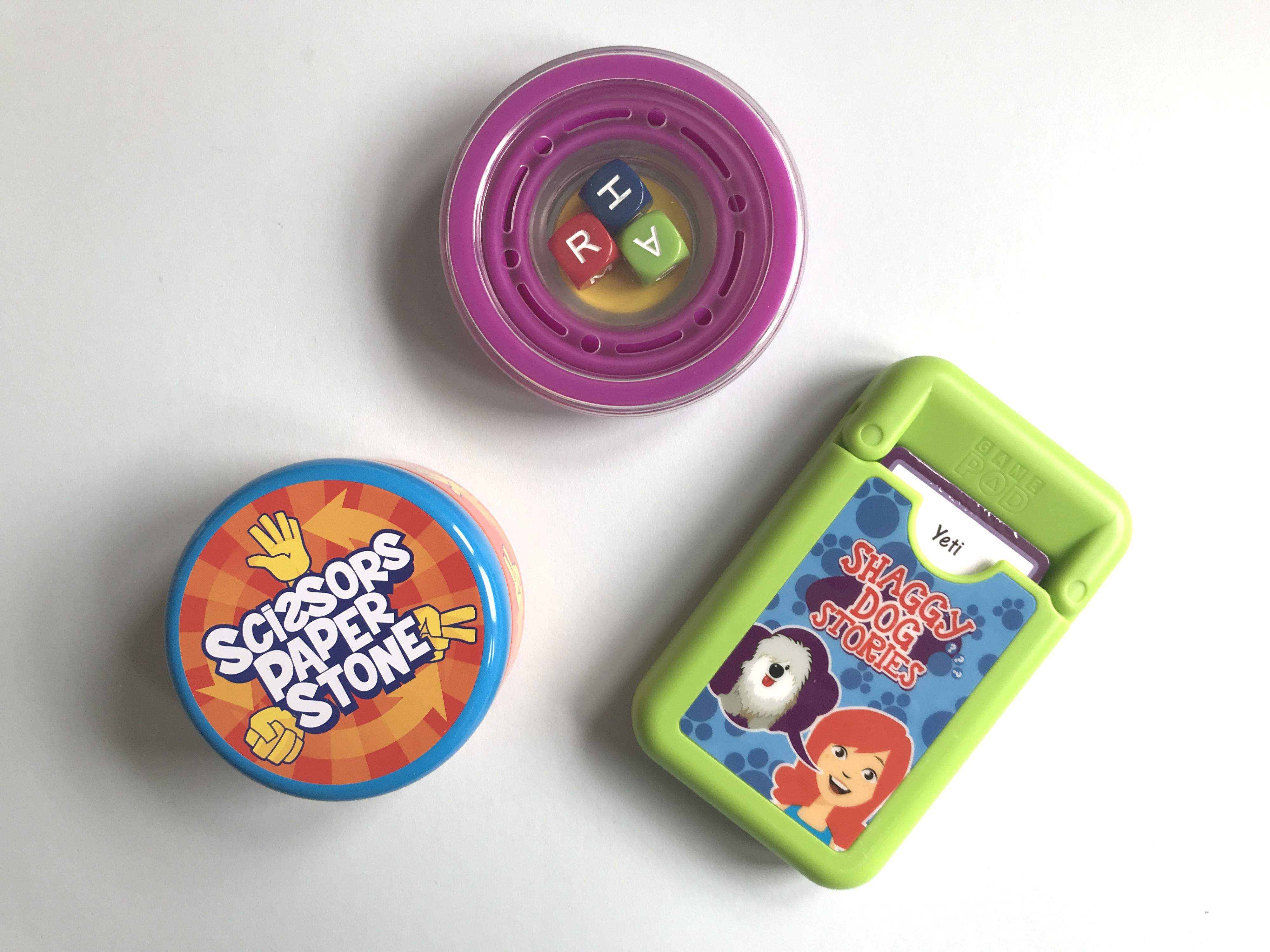 In conclusion, we really enjoyed all three games. Scissors, Paper, Stone is one our whole family could play together, including our four year old, and Slam Dice Words and Shaggy Stories were both great for our 8 year old to encourage his literacy skills. All three games are very compact and take up little space, making them perfect choices to take along on holiday.