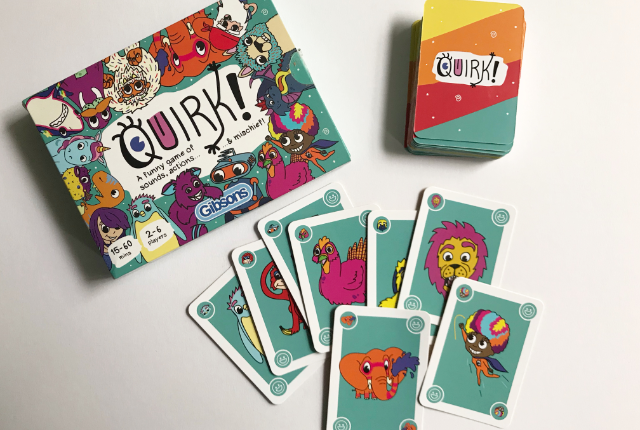 Hey everyone, I hope you are enjoying the virtual summer camp so far. If you are looking for something to keep the kids entertained in between all the crafting and cooking and science-ing, we also review a lot of games here on the blog. Just in time for the start of the summer holidays, we’ve been sent a bundle of games from Gibsons to review, so we will be sharing those over the coming weeks. First up, we have a fun family card game that goes by the name of Quirk! 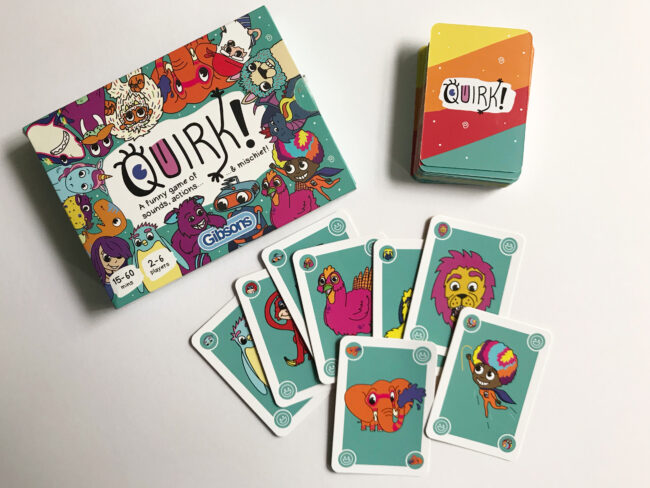 Disclosure: We were sent a free copy of Quirk! for review. All opinions are our own. 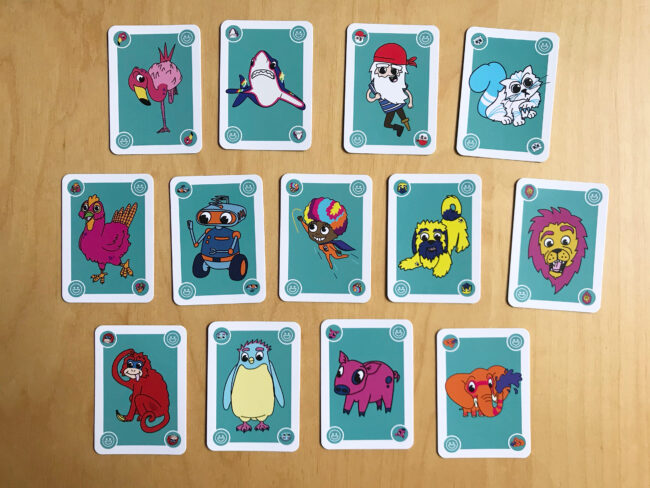 For a standard game, you’ll need 13 sets of green character cards, five red steal action cards, four blue stop action cards, and three orange block action cards. The yellow mischief action cards are optional, and add a little variety to the game. We found that the game is definitely more fun with the mischief cards, but if you are playing for the first time we recommend playing without them first and adding them in once you have got the hang of the game.

You can swap out character sets from the white and grey decks, to make each game a little different. You can also vary the number of sets of you play with. A standard game with character 13 sets lasts around 15 to 30 minutes, so using all 26 character sets would last up to an hour. 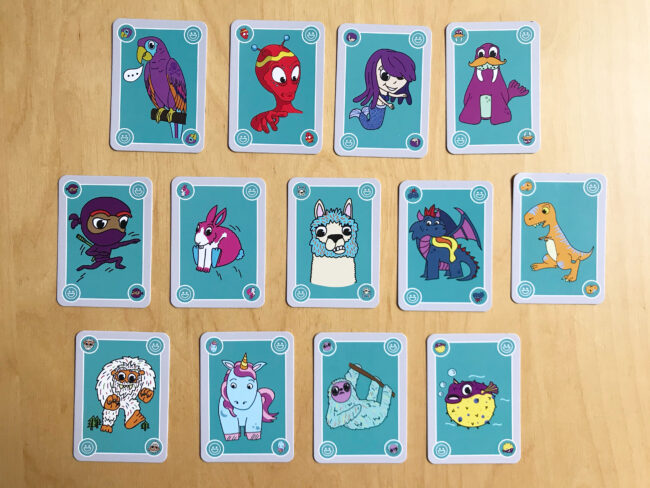 To set up the game, shuffle the character cards you are playing with and deal three cards to each player, face down. Then shuffle in the action cards, and place the deck face down in the middle of the table.

When it is your turn, you have two choices. You can either try to win a character card from another player’s hand, or you can steal someone’s completed Quirk. To win a character card, choose one you already have in your hand (don’t show anyone!) and pick a player to ask for another of the same kind. 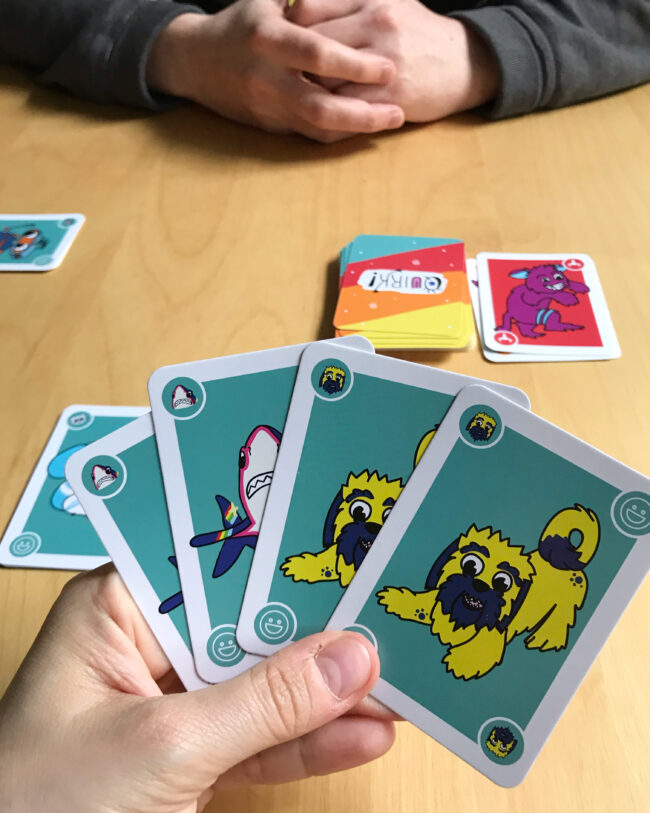 Here’s the twist – you can’t say what the character is or to describe it. You have to act out the character with sounds and actions. So, for example, if you want to ask a player for a dog card, you can’t say “Do you have a dog?” but you could say “Woof woof!” If the other player has any of the character cards you are asking for, they need to hand them all over. If they don’t, you pick up a new card from the deck to add to your hand. If you are given the wrong card, just keep quiet about it and try acting something else the next time.

If you complete a Quirk, place the three cards face up in front of you. If this leaves you with fewer than three cards on your hand, fill your hand up from the deck. You should always have at least three cards in your hand. 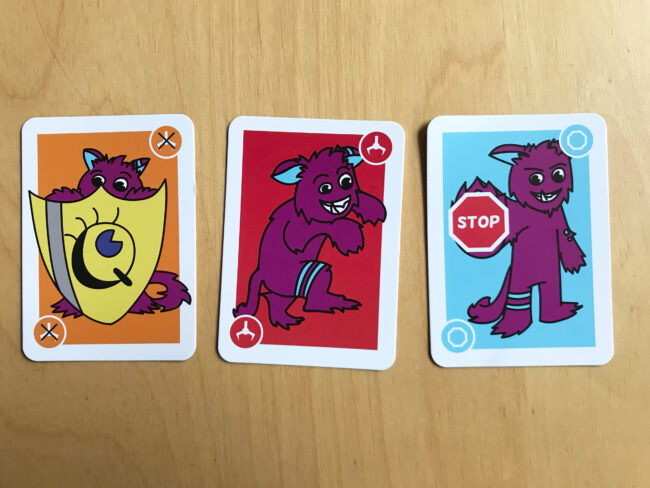 The other option when it is your turn, is to steal another player’s completed Quirk, by playing the red steal action card. You can’t steal cards from players’ hands, only completed Quirks that have been placed on the table. You can stop someone from stealing a Quirk from you, by playing an orange block action card. You can also stop someone asking you for a character card, by playing a blue stop card. This comes in handy later in the game, when players have worked out who must have a certain card. All action cards go on the discard pile once they have been played, as they can only be used once.

If you don’t have any green character cards or red steal action cards in your hand when it is your turn, then you have to take a new card from the deck. If you pick a green or red card, you can play it straight away, if not then it’s the next player’s turn. 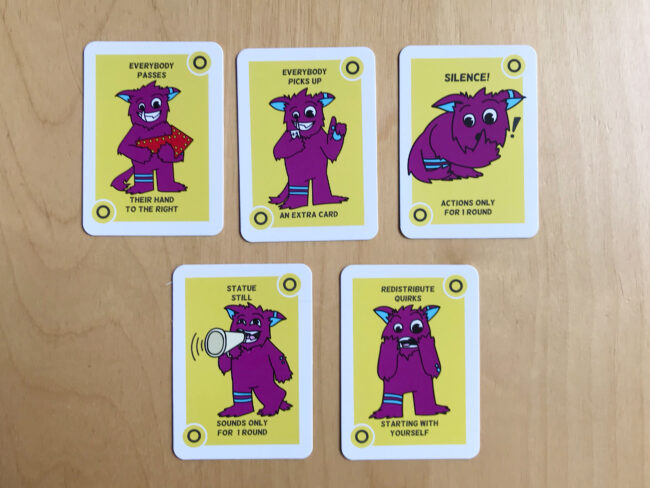 If you want to add in the yellow mischief action cards for some variation, shuffle these in to the deck along with the other action cards, after the character cards have been dealt out. If someone picks a mischief card during their turn, it is activated immediately and should be placed face up on the table for everyone to see. Mischief cards include being allowed to use only actions OR only sounds for a whole round, everyone having to pick an extra card from the deck, everyone passing their hand of cards to the player on their right, and all Quirks being redistributed starting with the player who picked the card.

The game ends when all 13 Quirks have been collected and placed on the table. The player with the most Quirks wins! 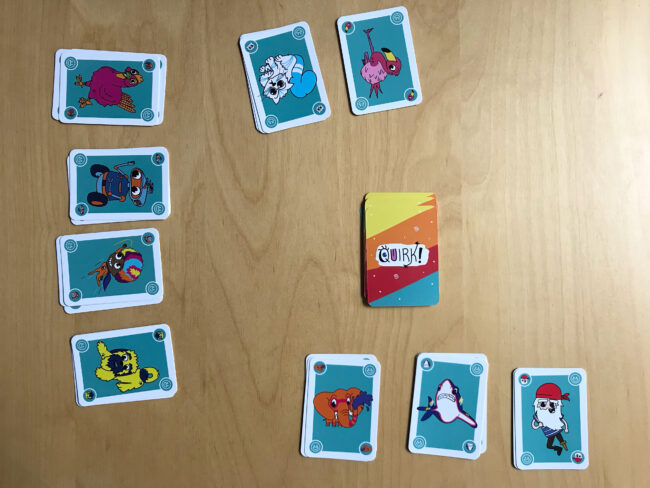 Quirk! is recommended for ages 5+ and I would say that’s spot on. Our boys are 5 and 9, and our 5 year old could play it by himself without any help no problem. The grey cards are a lot harder, so we played with just the white cards first and then swapped in a few grey sets. Once you’ve figured out sounds and actions for each character though, it does get easier every time you play it as you will recognise what characters are meant. The game is recommended for 2-6 players, though I guess if you used all 26 character sets you could try playing it with more people. We’ve played it with four people so far, and that worked well. 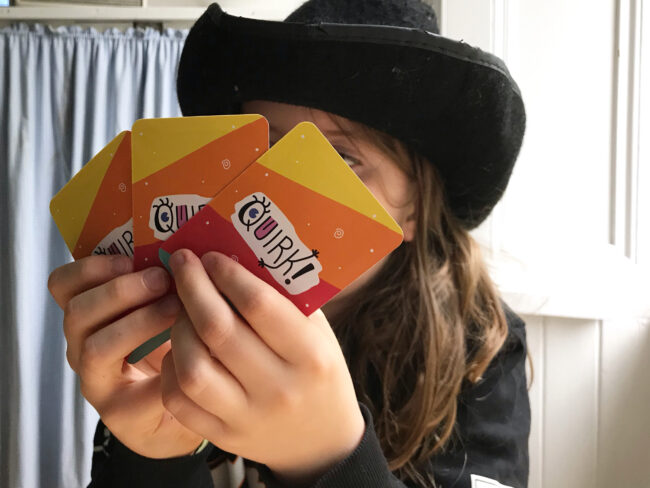 Overall, this was a really fun – and funny – game, and perfect to play with the whole family and with mixed ages. My boys thought it was hilarious to watch mummy standing on one leg acting out a flamingo! You do need to embrace your silly side a little. It would also work well as a game to take travelling, as you wouldn’t need to pack the whole box, you could just slip one of the two decks in to your bag which wouldn’t take up much space. Quirk! is available from Amazon (affiliate link).

Disclosure: We were sent a free copy of Quirk! in exchange for an honest review. All views and opinions in this review are our own. The Amazon link in this post is an affiliate link. This means if you buy anything via this link, I received a small percentage at no extra cost to you, which helps to keep this blog running. Thank you.