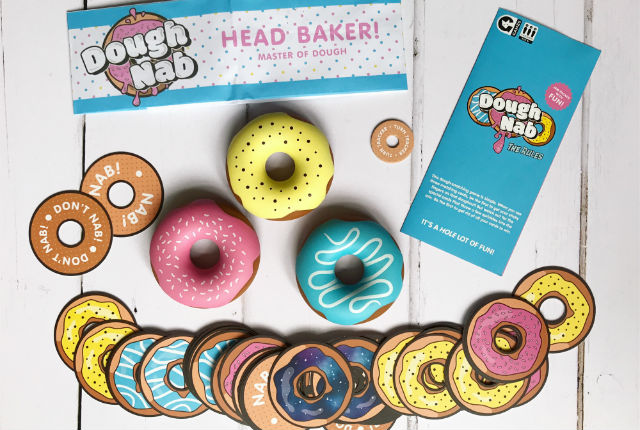 Hands up if you love doughnuts! Well, then we have the perfect family game for you today in our latest review. Dough Nab – The Game is a fast paced game jam packed (pun intended) with fun. Real doughnuts to eat on the side are optional, haha. 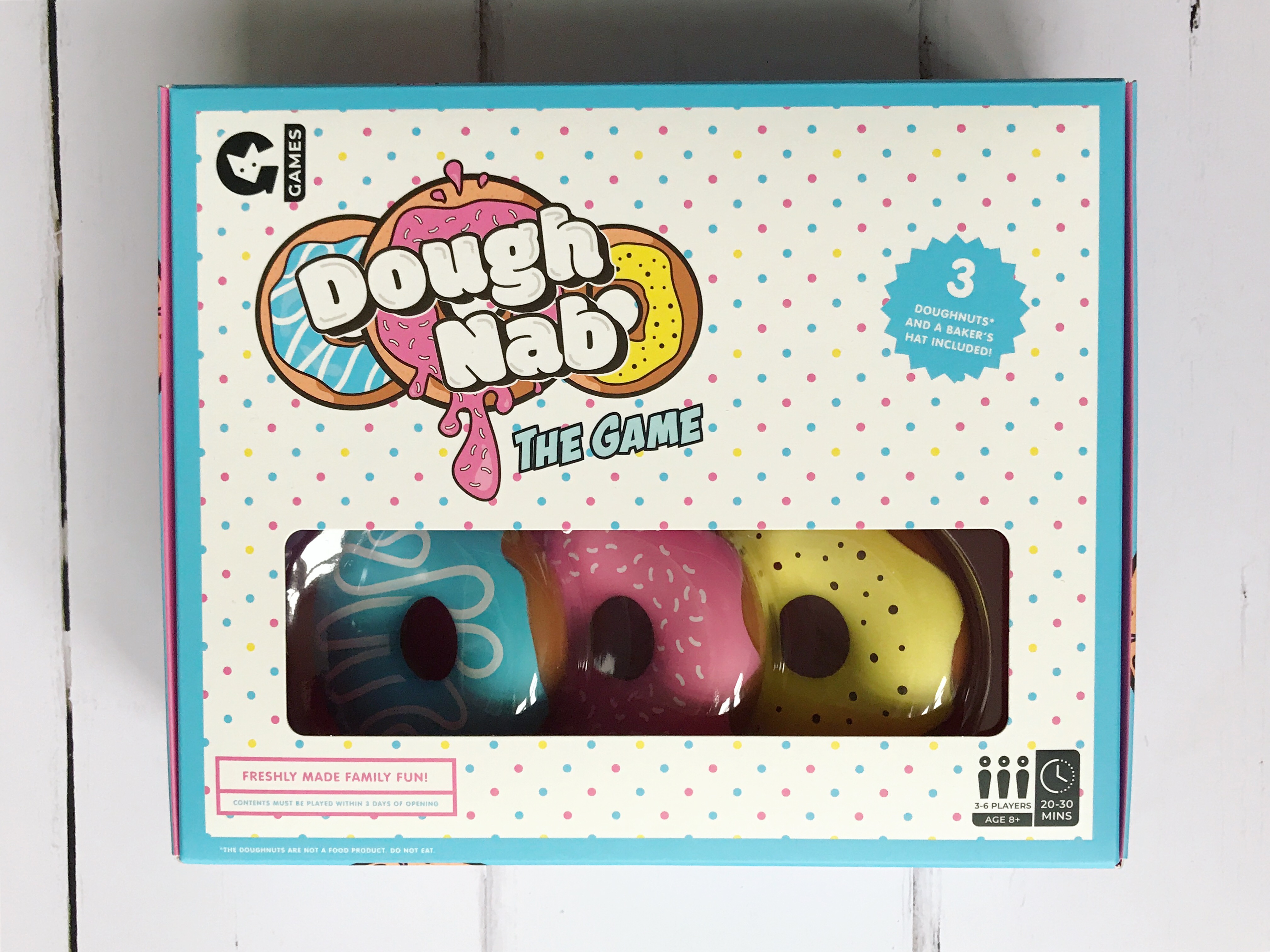 Disclosure: We were sent a free copy of Dough Nab – The Game in return for an honest review. All views and opinions are our own. 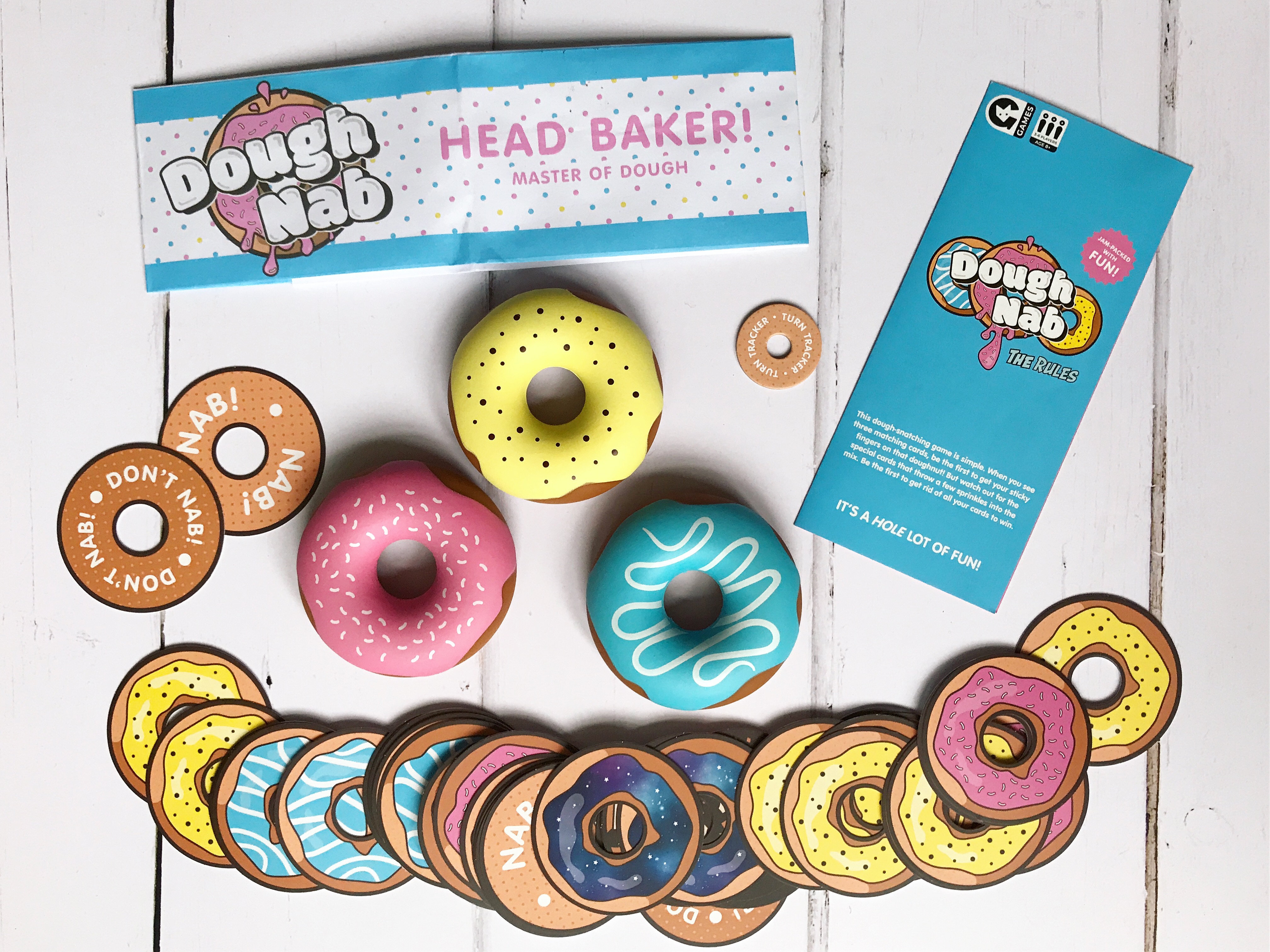 Inside the box you will find:

As our youngest discovered, the plastic doughnuts are also fun to just play with: 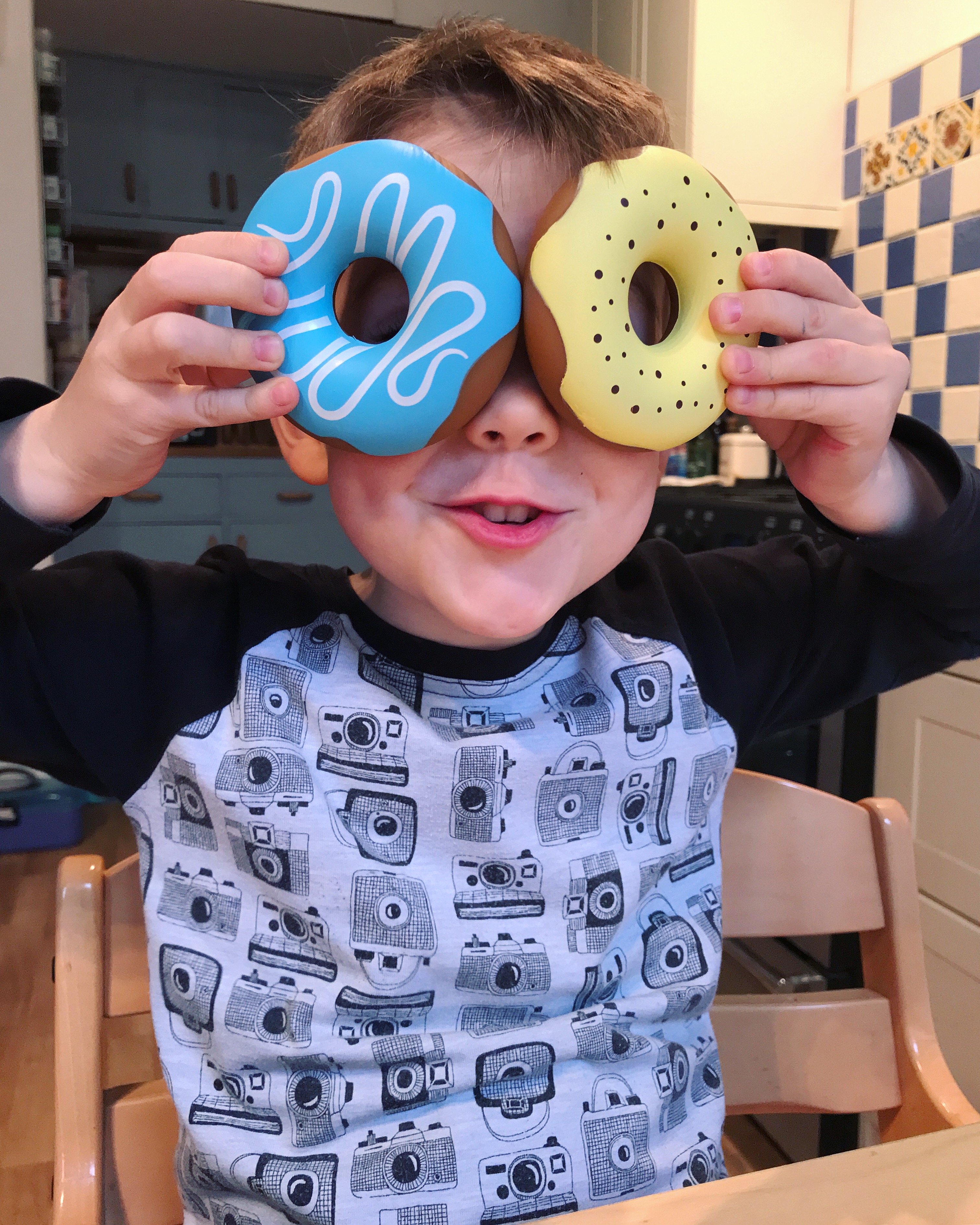 But back to the game! The aim of the game, is to be the first person to get rid of all your cards. You do so by trying to grab one of the plastic doughnuts when the right combination of cards is played – if you do so, you get to pas your cards on to another player. But let’s back up a little and look at the rules in a little more detail. 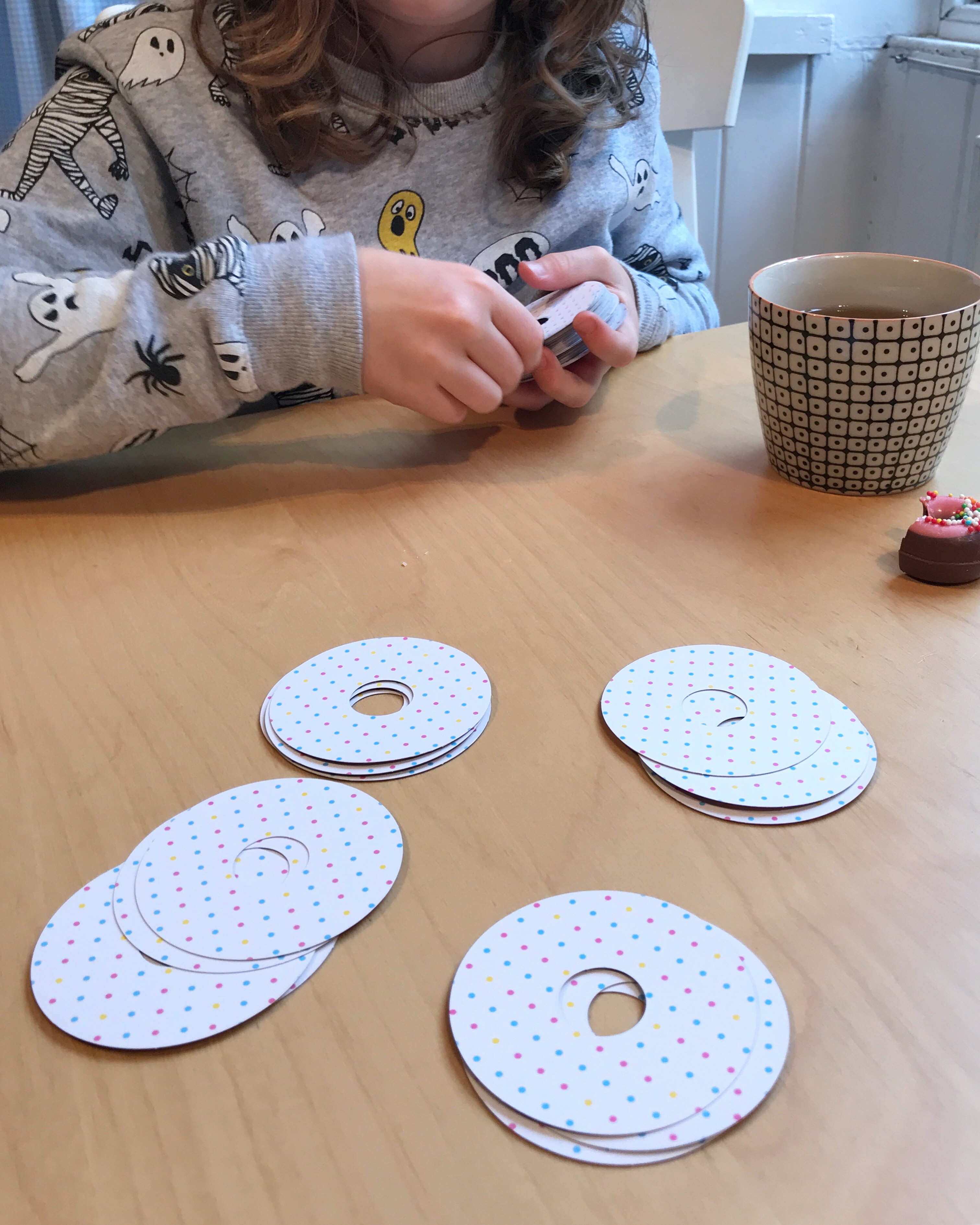 First of all, to set up the game place the three plastic doughnuts in the centre of your play area, shuffle the cards, and deal ten cards face down to each player. If you are only playing with three players, remove one of the doughnuts and the corresponding cards with doughnuts of the same colour from the game. You will see in a moment why this is necessary. Ready to play? 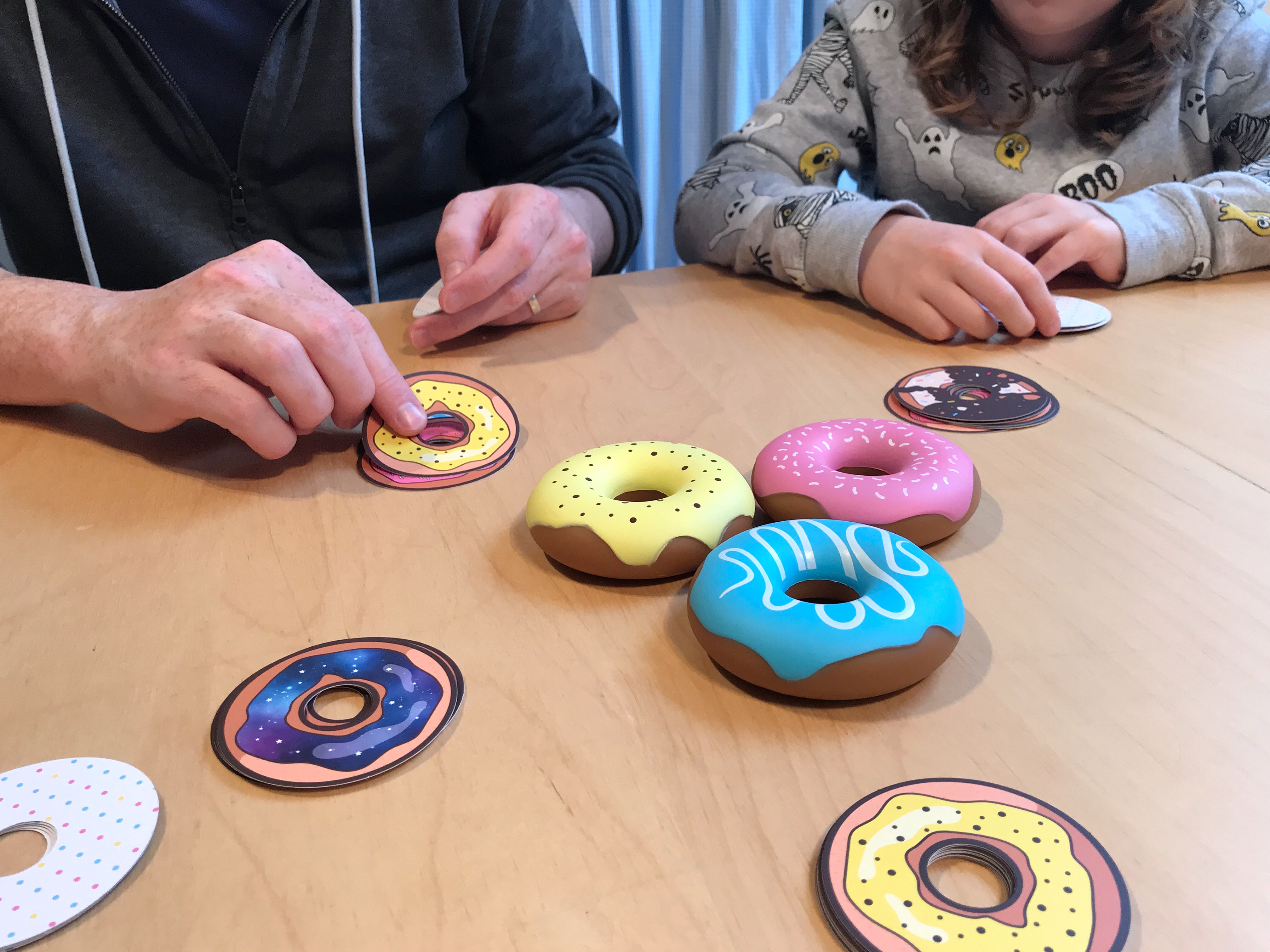 Players take it in turns to turn over their top card and place it face down in front of them where all can see it. Play continues in clockwise direction, with each player building up a pile of discarded doughnut cards in front of them. If at any point in the game three cards of the same colour are facing up, players must try to grab the corresponding doughnut from the middle, for example here we have three matching pink cards: 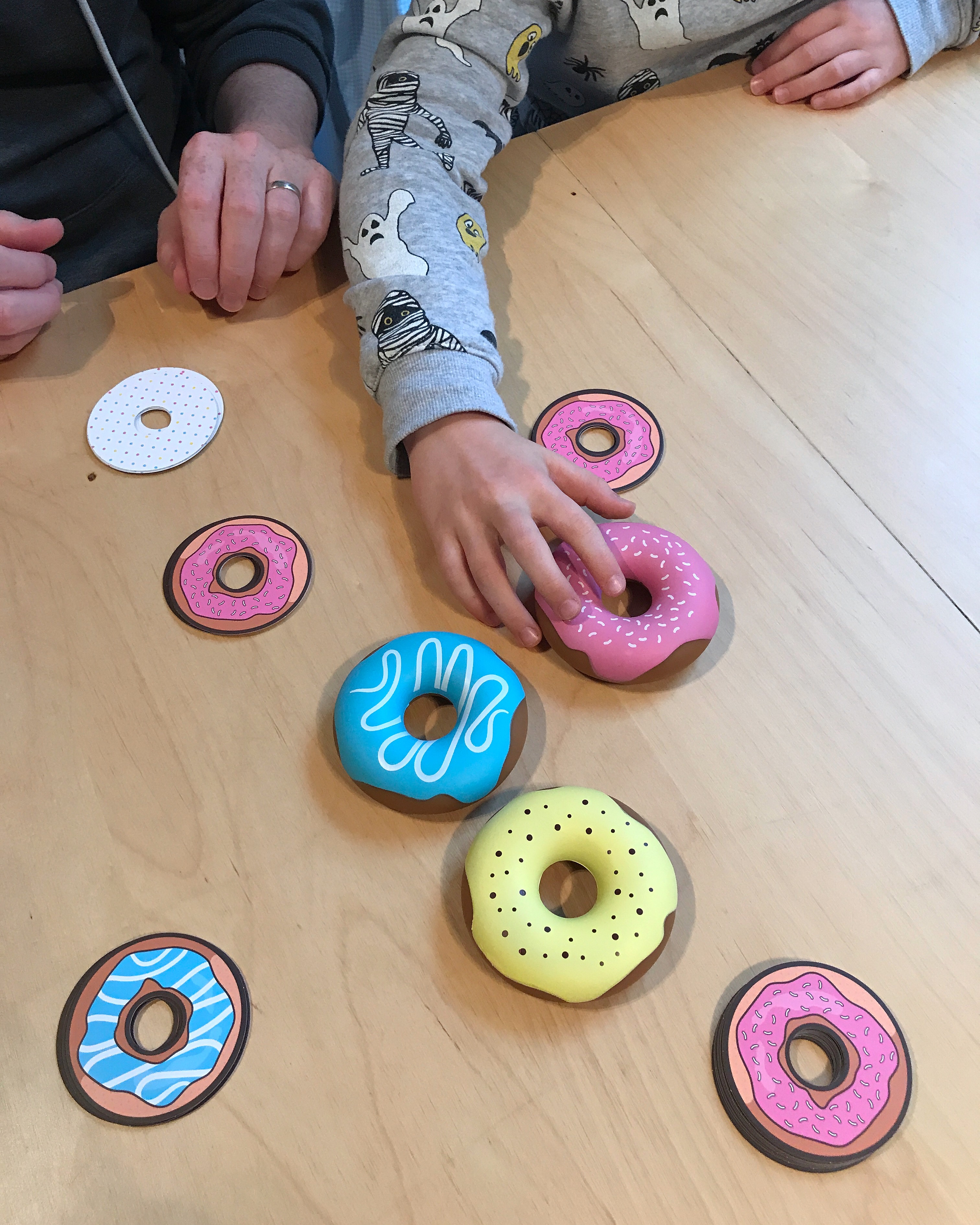 The successful grabber then passes their discarded pile of cards on to a player of their choice. All other players add their discard piles to the bottom of their hand, and play continues. If a player grabs the wrong colour of doughnut, or grabs a doughnut when there are not three matching cards, then they receive everyone else’s discard piles instead!

Once you have played all the cards on your hand, you still need to get rid of your discard pile to win the round. You can do that either by winning a grab, or if another player grabs at the wrong time and gets everyone’s discard piles as mentioned above. 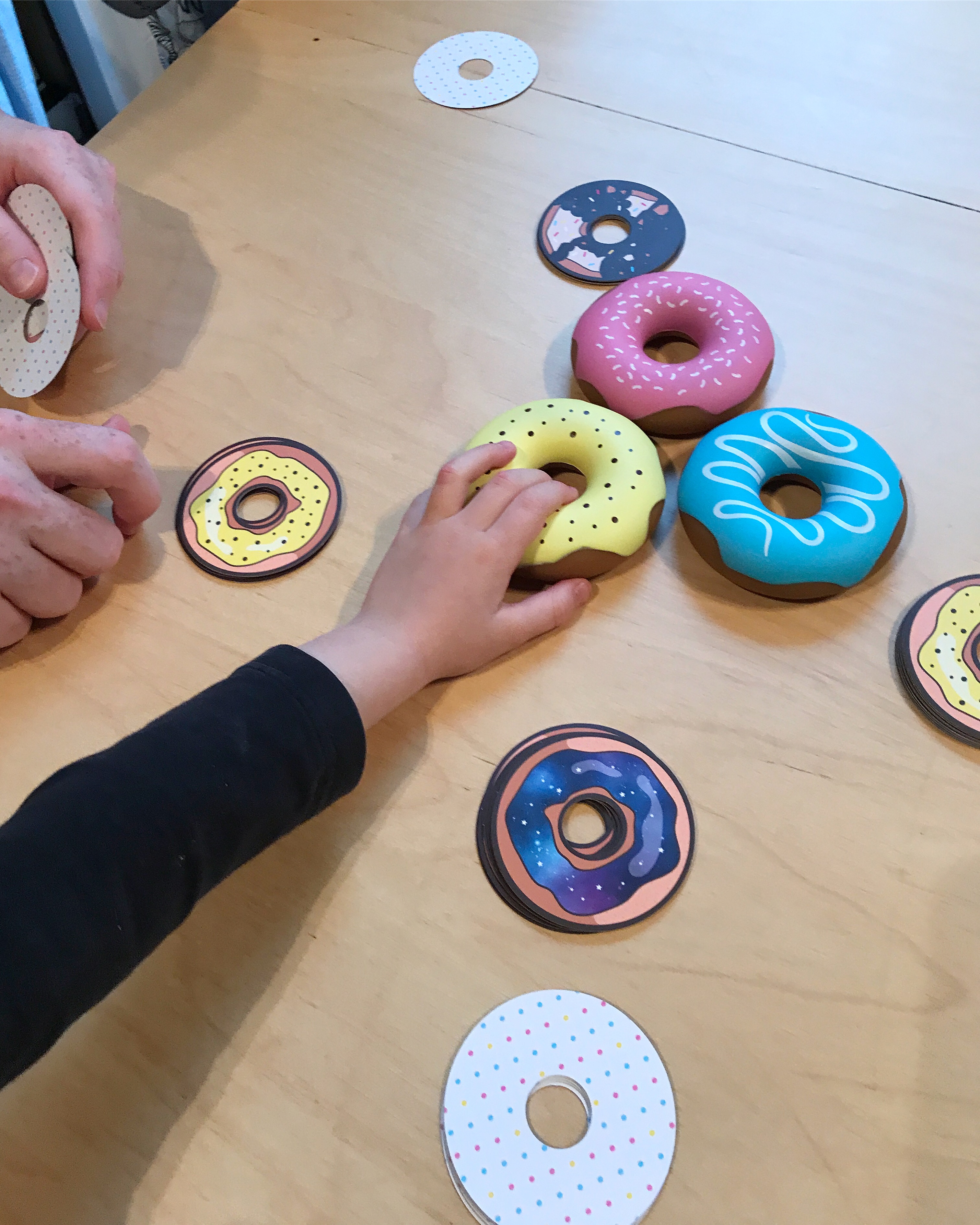 There are a couple of other special cards too, to mix things up a little. First of all, there’s the “magic doughnut” card as seen in the photo above, which has a galaxy patterned icing. This plays the role of a joker, i.e. these cards can be matched with pink, yellow or blue cards – just grab the doughnut that corresponds to the other colour. If you are lucky enough to have three magic cards matching, then it’s a free for all race to grab any of the three doughnuts, with the unlucky player/s who didn’t manage to grab any getting all the discard piles. 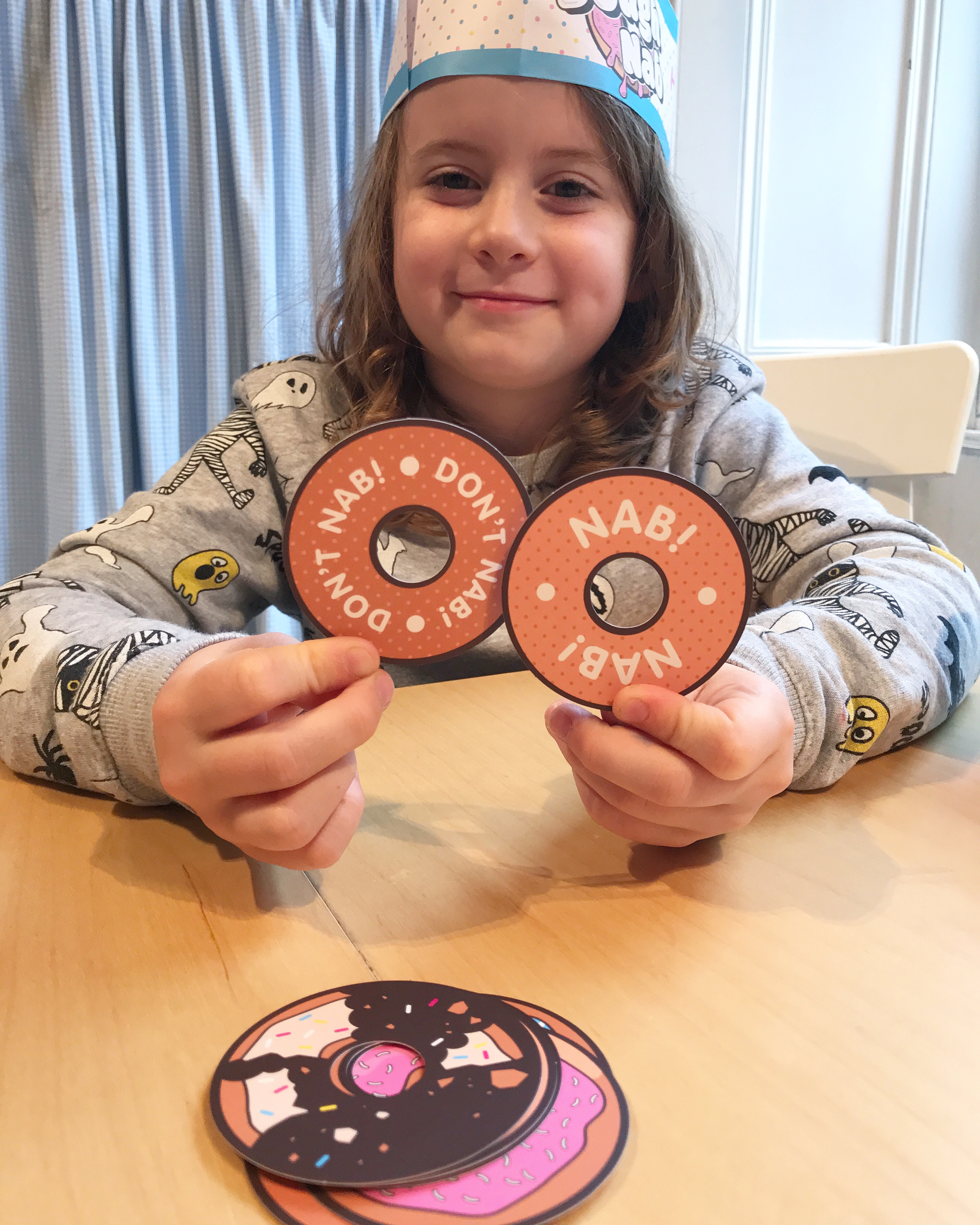 The card with the half eaten brown doughnut (as shown on top of the discard pile in the photo above) doesn’t do anything, it’s just there to confuse you! And then there are the two special cards which Oskar is holding up, that say “Nab!” and “Don’t Nab!” A Don’t Nab! card overrules all other cards, i.e. no grabbing until the Don’t Nab! card is covered up again, even if there are matches. The Nab! card on the other hand does the same as matching up three magic doughnut cards (see above) i.e. all the doughnuts are up for grabs! You see now why you need to remove a doughnut if there are only three players, as there always has to be at least one player more than the number of doughnuts so that someone goes empty handed in an “all grab” situation. 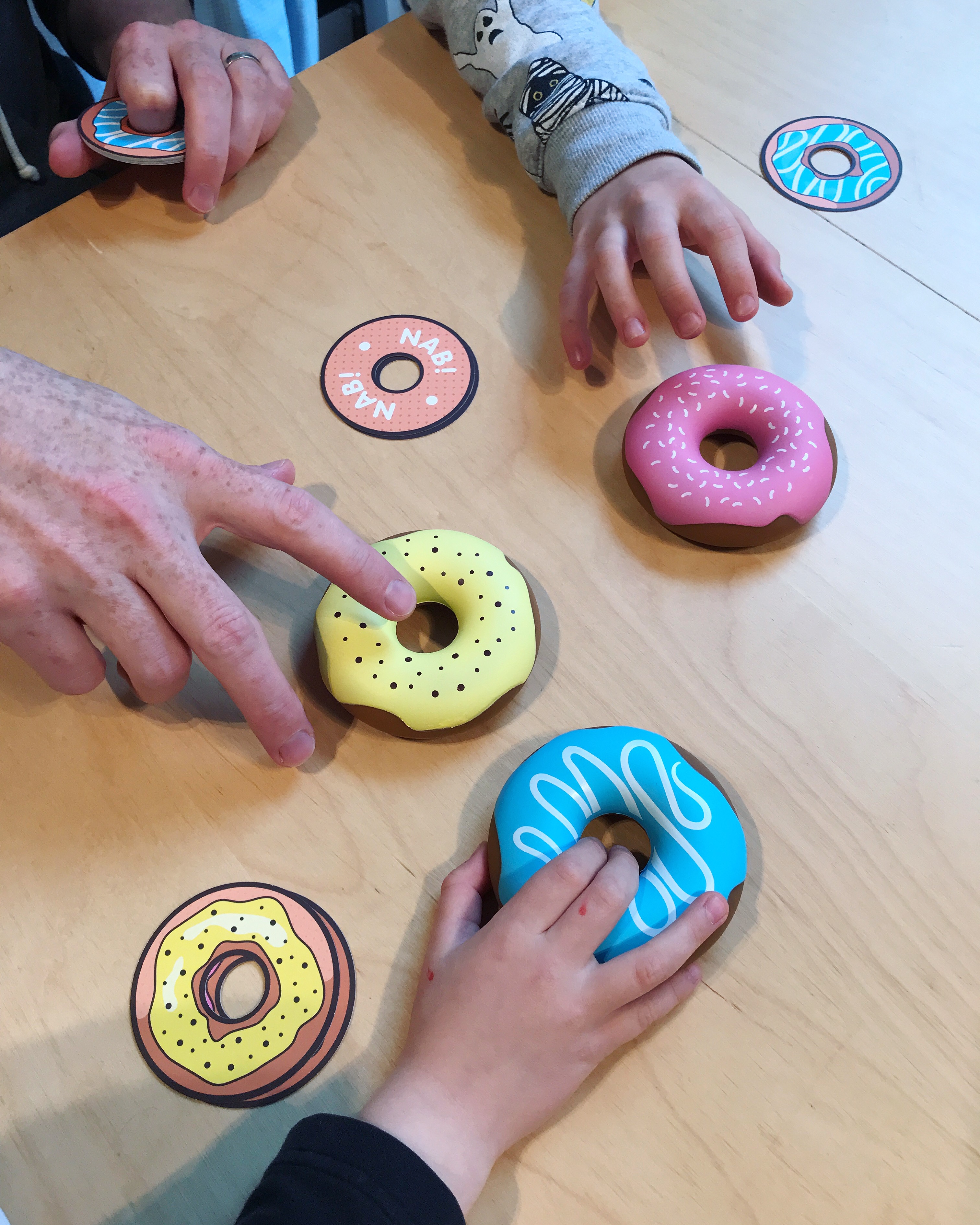 The winner of a round gets to wear the Head Baker’s hat for the next round. All cards get reshuffled and dealt out again, and the overall winner is the person who wins the most rounds, so you should agree at the beginning how many rounds to play. 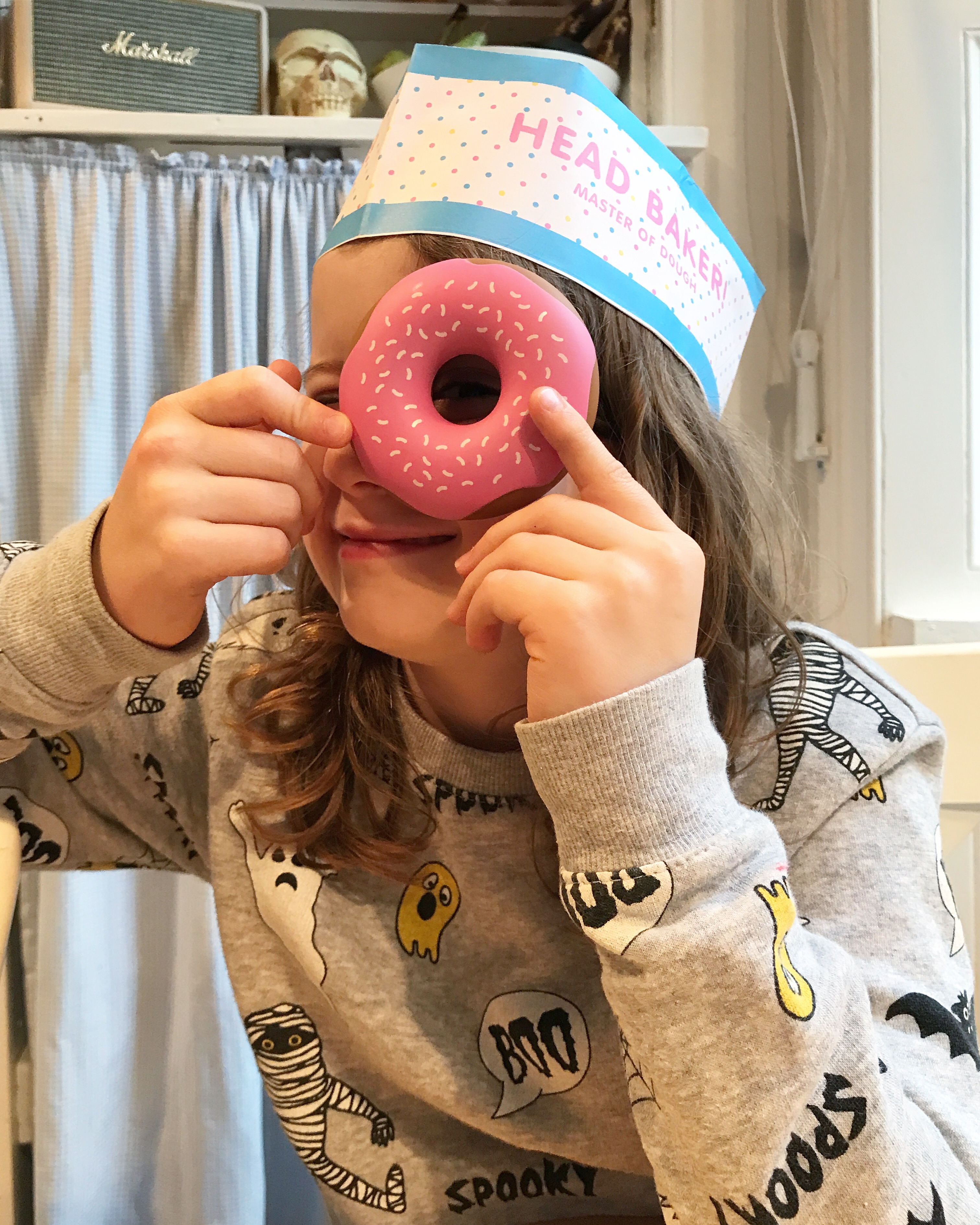 The rule may seem like a lot to take in, but it’s really a very simple game once you get the hang of it. We played one round with open cards, going through the rules at each step, and then we were on our way! Oh, one more thing I should mention is the turn-tracker token. This moves around with each player so you know whose turn it is. We kept forgetting to do this though, and ended up playing without it – with the result that we sometimes couldn’t remember whose turn it was after a grab! Haha.

All in all this is a super fun game to play. It’s for 3-6 players and recommended for ages 8+. Our youngest, who is almost 5, really wanted to join in but he couldn’t really keep up with the pace sand had a slower reaction than the rest of us, so we had to cheat a little so he wouldn’t always loose the grabs. Oskar though, who is almost 9, gave us a good run for our money and definitely has a better reaction time than me! I think it would be even more fun to play with a full round of six people, so we can’t wait to have a go next time we have friends round.

Dough Nab – The Game is available via Amazon (affiliate link).