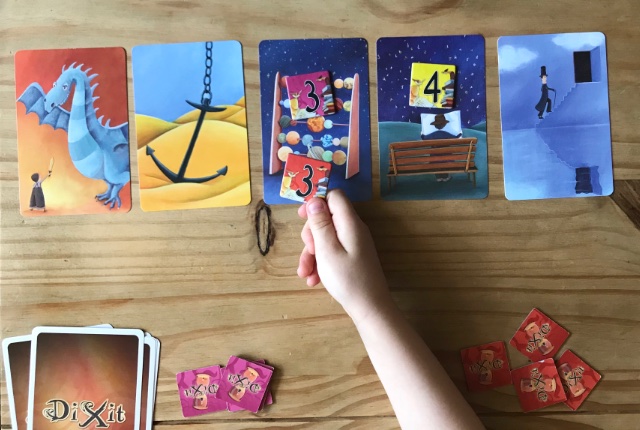 We’re back with another review for the Asmodee UK Blogger Board Game Club, whom we are currently working with. Asmodee UK is an established distributor of toys and games, and the Board Game Club works with bloggers by providing a free game each month in return for an honest review. This month we are reviewing the game Dixit. 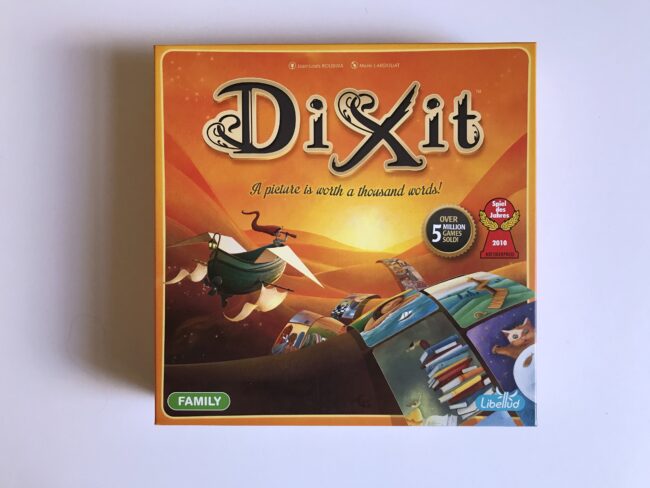 A picture tells a thousand words!

Dixit is a card based storytelling game. In the box, you get 84 beautifully illustrated image cards, six sets of voting tokens each numbered 1 to 6, six wooden playing pieces, as well as a scoring track. The aim of the game is to tell stories based on the images on your cards, and collect points based on how many other players correctly guess which car you have described. 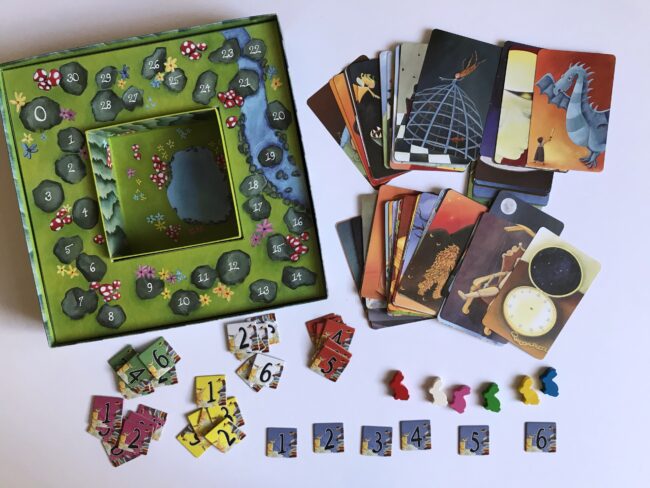 For a 4 to 6 player game, to set up the game each player gets the same number of voting tokens as number of players. The cards are shuffled and each player is dealt 6 cards (there are slightly different set up rules for a 3 player game, which I’ll come to later). Do not show your cards to anyone. Each round consists of four steps.

Step 1: To start the game, the player to go first as the storyteller chooses one of their six cards and describes it to the others in a sentence, without showing the card to anyone. The sentence can be anything either invented or inspired by an existing poem, song, movie title, proverb and so on. The sentence can be as short or long as you like. 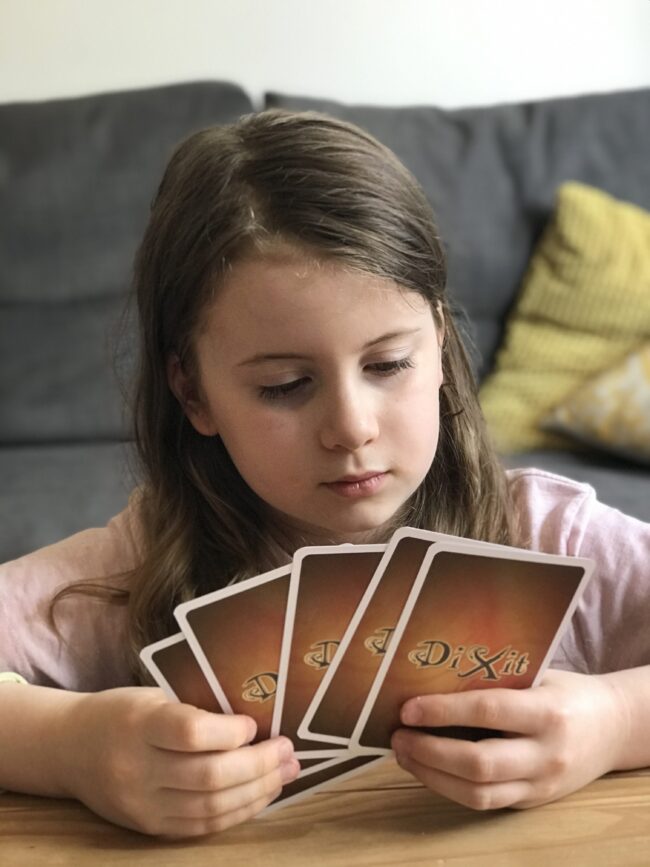 Step 2: Each of the other players then needs to look at their own cards, choose the one they feel best matches the sentence, and pass it to the storyteller without anyone else seeing it. The storyteller shuffles all all the received cards, together with their own card that they were describing, and places all the cards face up on the table. 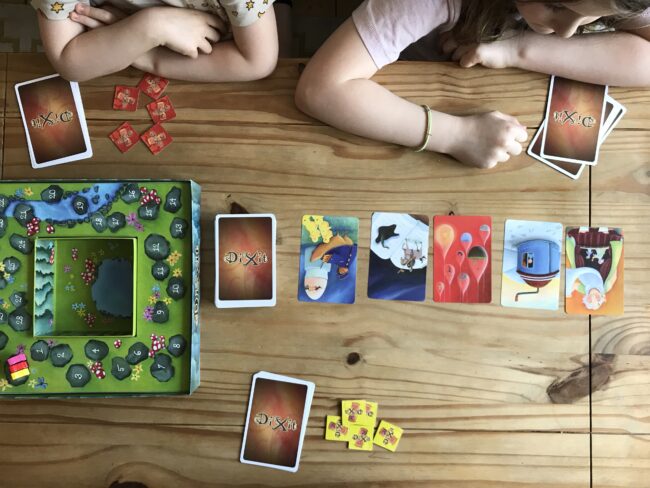 Step 3: The other players now have to try and guess which card was the storyteller’s card. Each player secretly selects one of their numbered voting tokens to correspond with what they think is the correct card (make sure you’ve all agreed on which cards is number 1 etc.), and places it face down on the table. 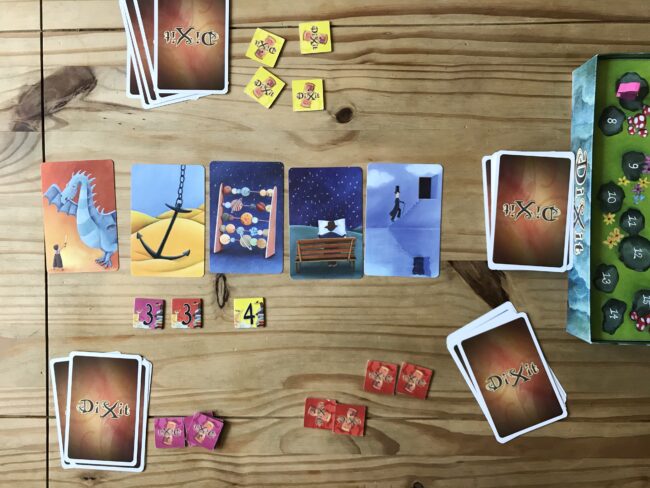 Step 4: Once all players are made their choice, the tokens are turned over and the scoring begins. The scoring works as follows: 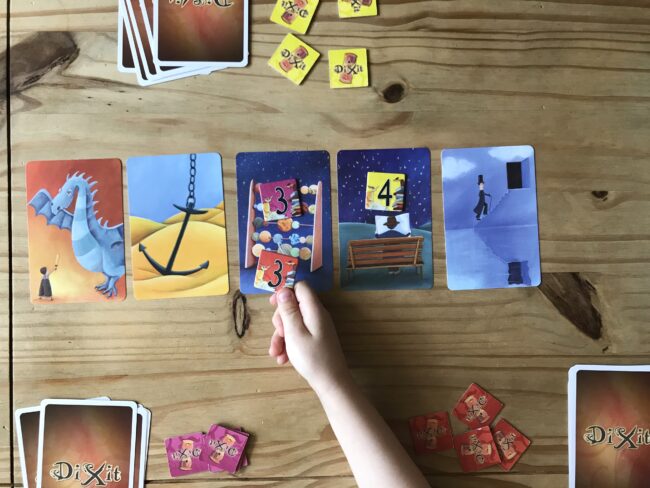 You use the playing pieces and the scoring track to keep track of how many points everyone has. At the end of the round, the played cards get discarded and everyone draws a new card so they have 6 again. The play continues with the next player being the storyteller. The aim of the game is to be the first player to reach or exceed 30 points and win the game. 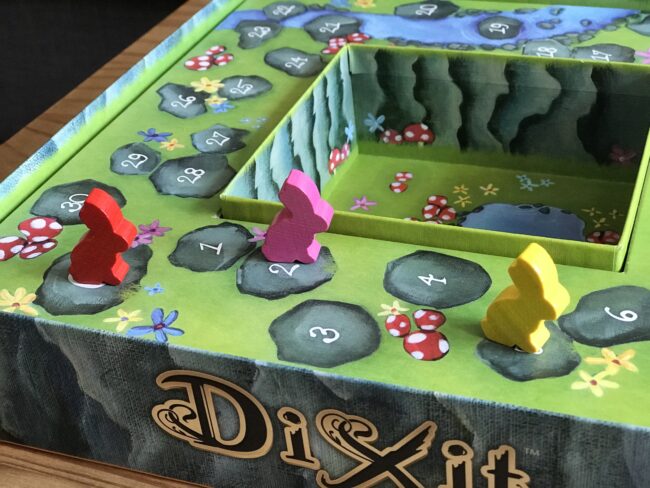 There is a variant when playing with three players. In this case, everyone gets five voting tokens and seven cards, and the players guessing get to play 2 cards each per round so that you end up with 5 cards to choose from. Our youngest is only 5 and it’s an 8+ game, so we’ve mostly played it with three players and he joins one of us grown ups to play as a team. But he’s also given it a shot playing on his own.

The rules of the game are very straight forward and the game seems really simple. However, the challenge is finding the right balance between describing the card in too much detail and everyone guessing it correctly, and being too vague and no one guessing correctly, as in either case you score zero points as the storyteller! The kids found this a lot harder than us grown-ups, so it is maybe a little bit of an unevenly matched game when playing with different ages. But I think it also depends not just on your age but also on your ability to think creatively on your feet, which my husband was much better at than I was. I also think that although the game is aimed at 3+ people, it would be most fun in a bigger round with more cards to choose from when you are guessing. Unfortunately, due to the lockdown restrictions in the past couple of months, we have not been able to invite friends round to try out the game in a bigger round but we fully intend to do so when we can. 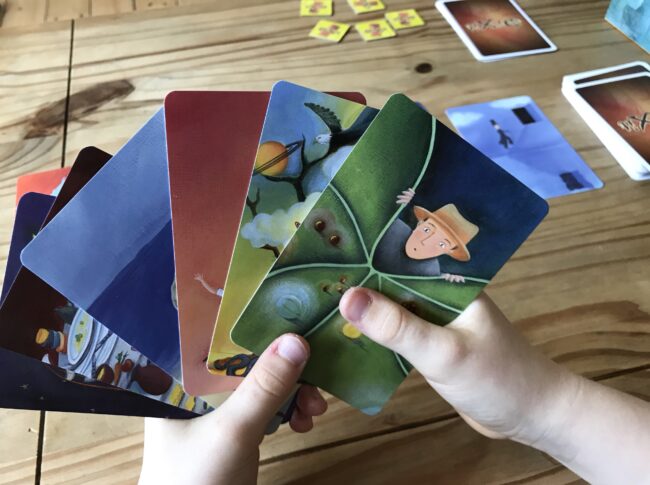 Having said that, even playing in a small round, Dixit is a very fun and family friendly game. Since there is no reading involved, younger children can also play though as mentioned above they might find it hard to strike the right balance in their descriptions. You’ll probably need a little patience playing with children under 8, but it’s not impossible and it’s a great way for them to develop their storytelling skills and how to articulate their thoughts. In fact, I think our 5 year old is possibly the one who loves this game the most.

One downside I can foresee, is that if you play the game to often with the same people, you may start to know which cards they are talking about once you’ve played them all through, but with 84 cards in the pack we are still a long way off from that! And if you do need more variety, there are a number of Dixit expansion packs you can add to the game. 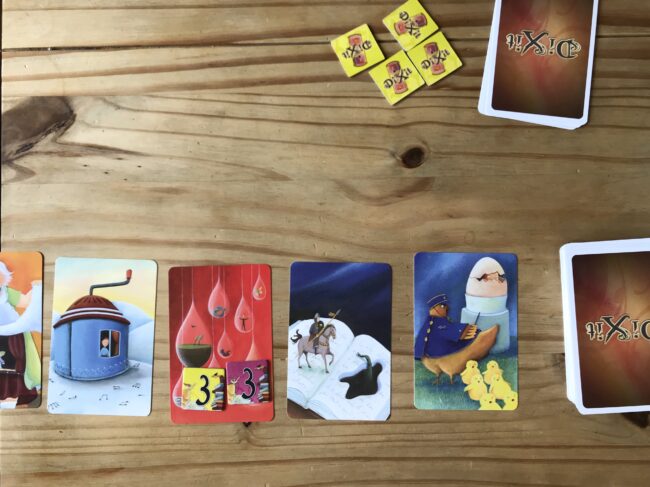 Finally, I love a game that keeps on giving, and once you have finished playing you can also just the use the cards as a stand alone tool for storytelling with your kids. We have a couple of sets of story dice, and you can use the cards in a similar way by either getting your children to tell a story about what is happening in just one card, or getting them to pick a few cards and create a story that links them together.

Dixit is available from a number of toys and games retailers, as well as on Amazon (affiliate link).