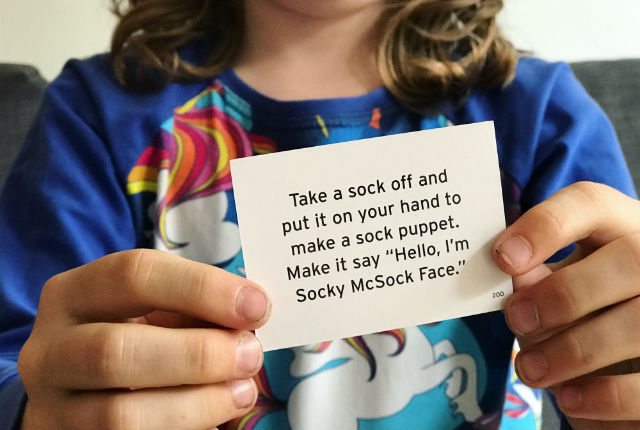 We have a really fun new game to share with you today, which we were sent by Big Potato Games for review (how’s that for a fab company name, by the way!) 20 Second Showdown is a fast-paced team game with quick fire challenges, which has brought us many hilarious moments over the the Summer. 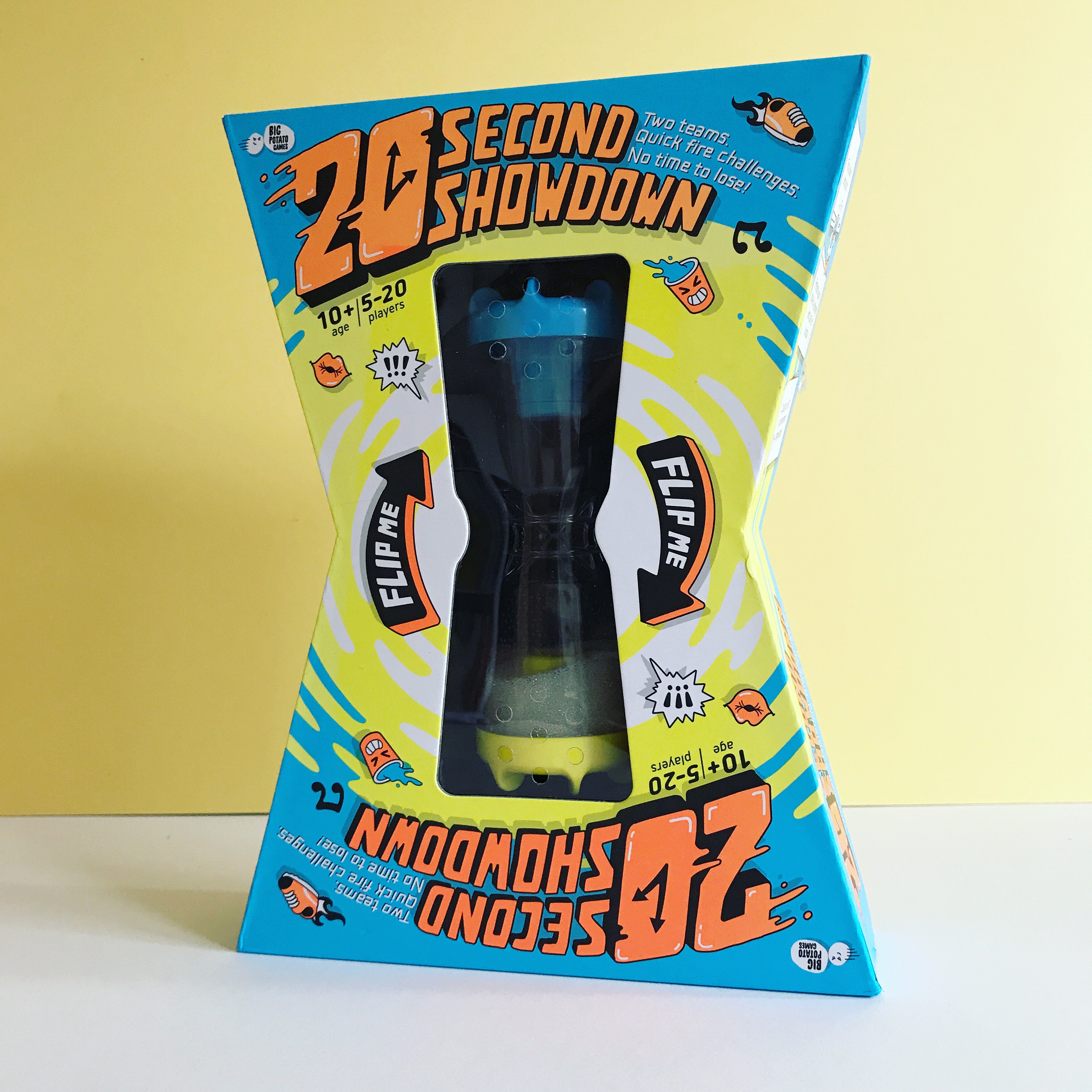 In the box you will find: a pack of double sided challenge cards, a timer, two batons, and two help cards. 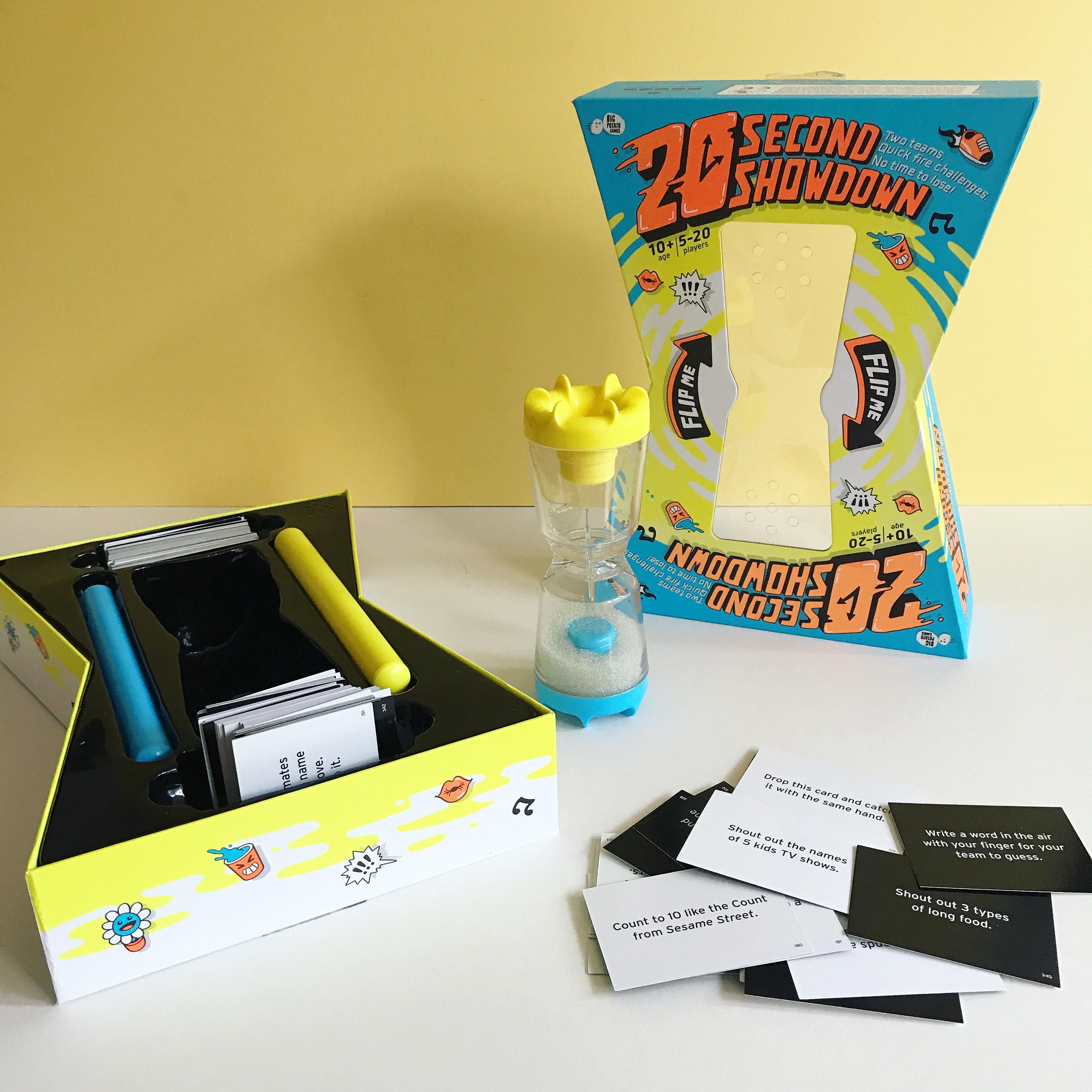 Ideally, you want to play this game with five or more players. One player is the referee, the others split in to two teams. The more players you have on each team, the more fun it is and we’ve played it both with a larger group when we’ve had people visiting, but also with just the four of us (when playing with four players, we just played with two teams of two and took it in turns to be the referee). Since it’s such a fast paced game where everything is a bit of a blur at times, and also because not all our friends wanted to be photographed, the boys and I have staged a few photos to show you how the game works. 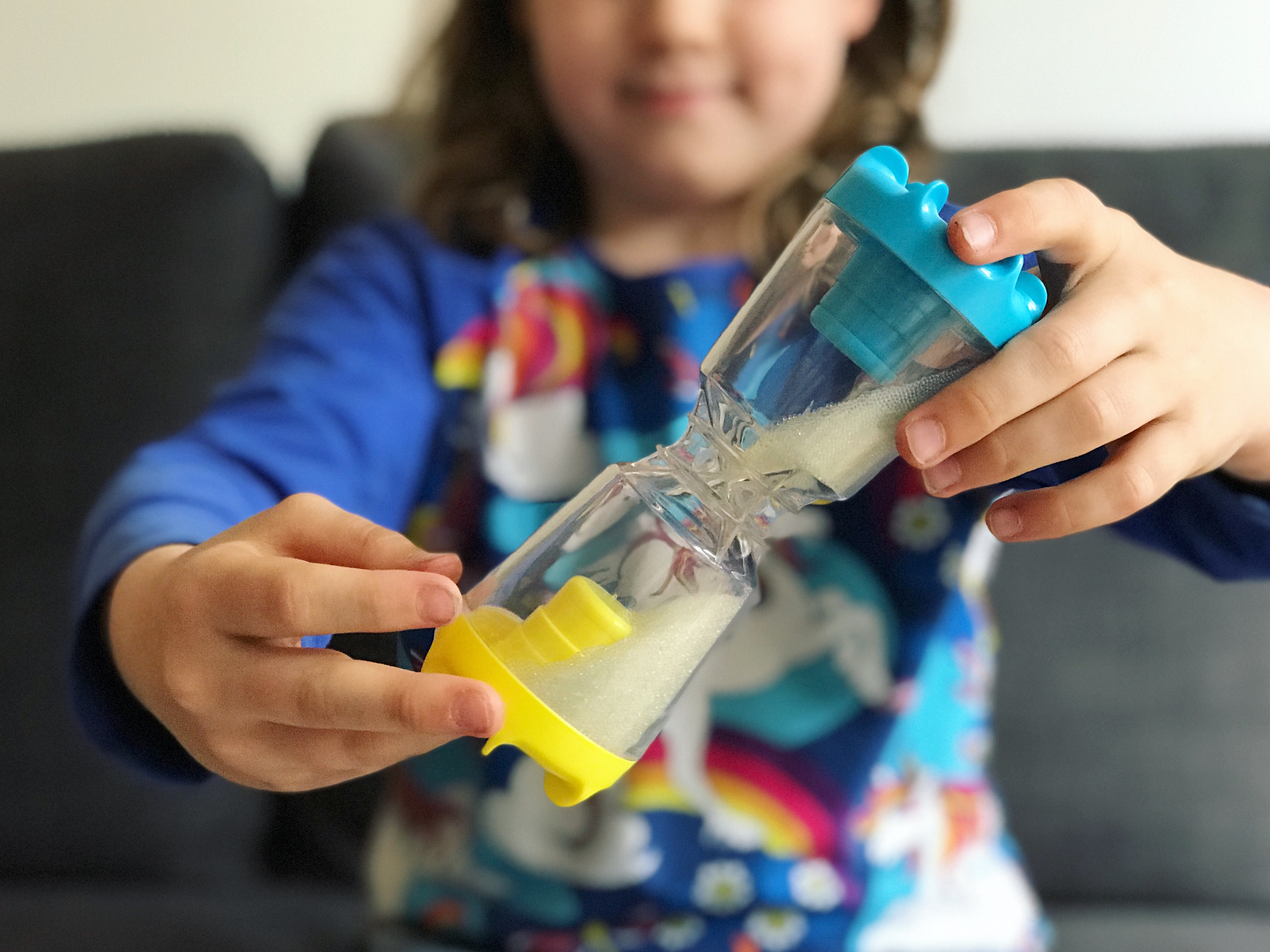 First, you need to prepare the timer. The referee runs the timer until there is an equal amount of sand, i.e. 20 seconds worth, in each half (the guideline for this is when the sand reaches the second line on the inner cone of the timer), then places it on its side and spins it to determine the teams – if the blue end of the timer points to you, you are on the blue team and vice versa for team yellow. The players who will complete the first challenge in each team hold the batons, and the blue team gets to go first. 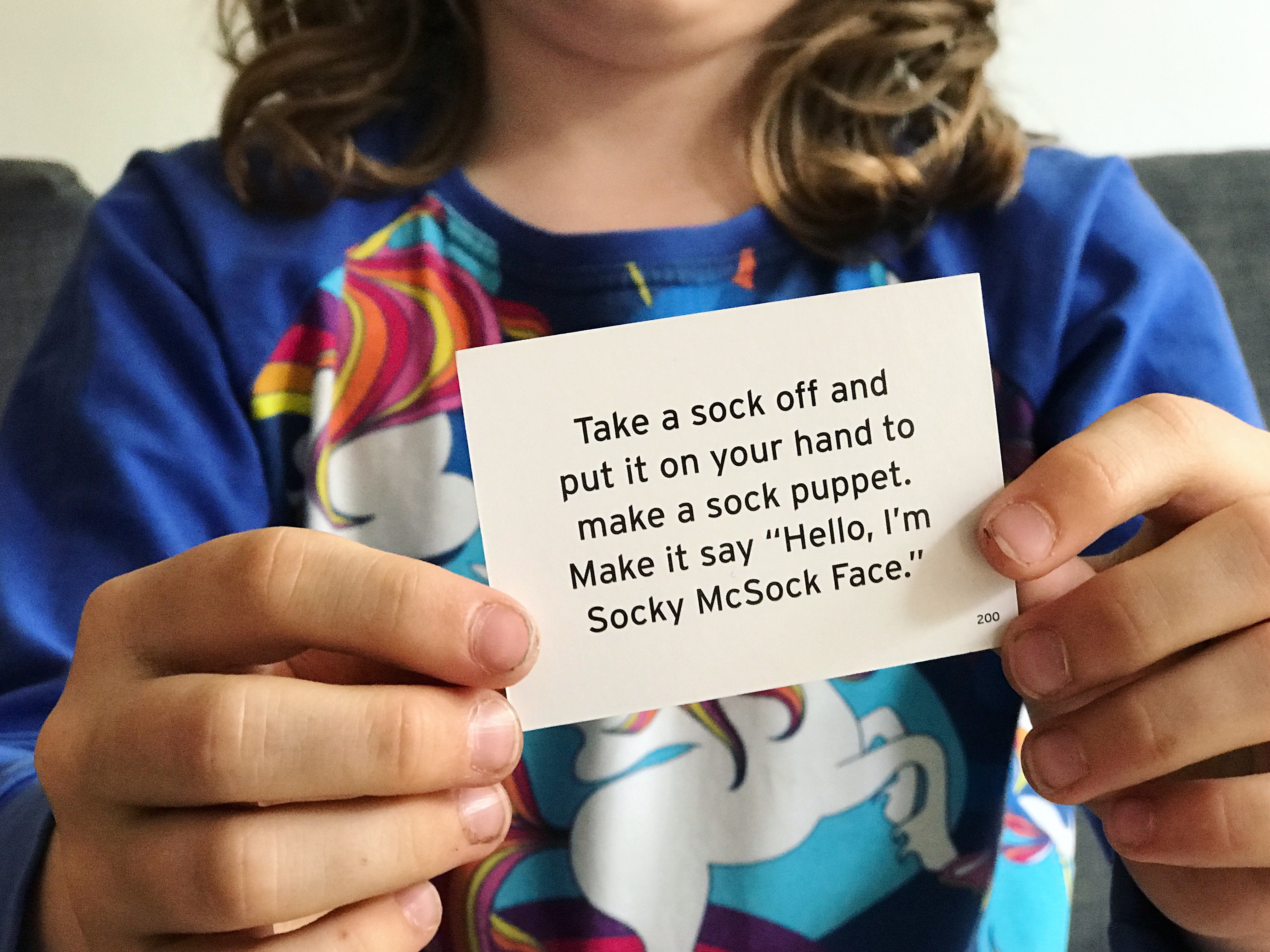 The referee then reads out a challenge card, and at the same time flips the timer so that the blue side is pointing up and the blue team is losing time. The player with the baton now has to complete the challenge as quickly as possible, before the 20 seconds run out. Here we have Oskar demonstrating the sock puppet challenge from above: 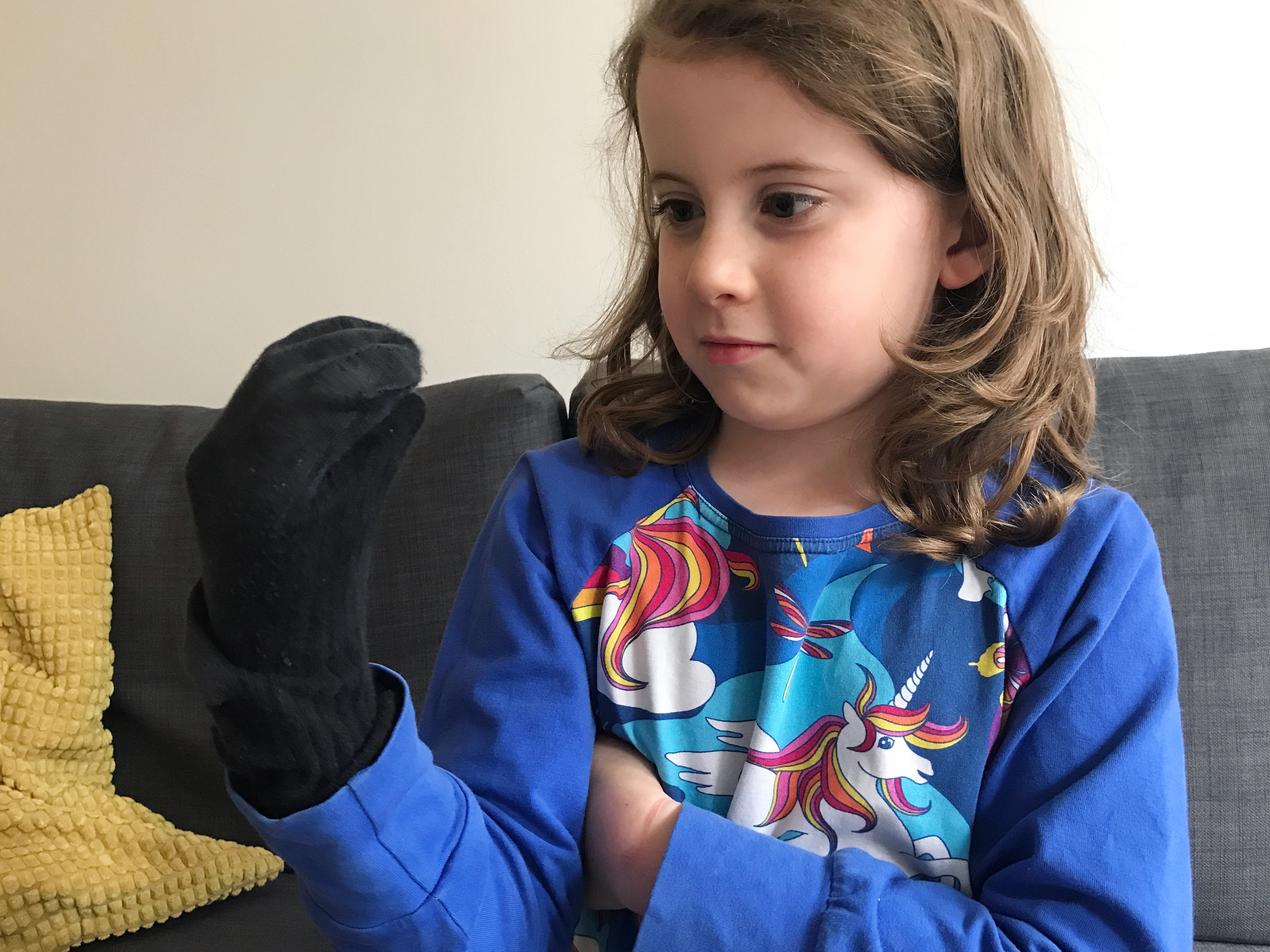 Once you have completed your challenge, you pass your baton on to the next teammate in line (you will notice that they are actually team yellow in the photos!) 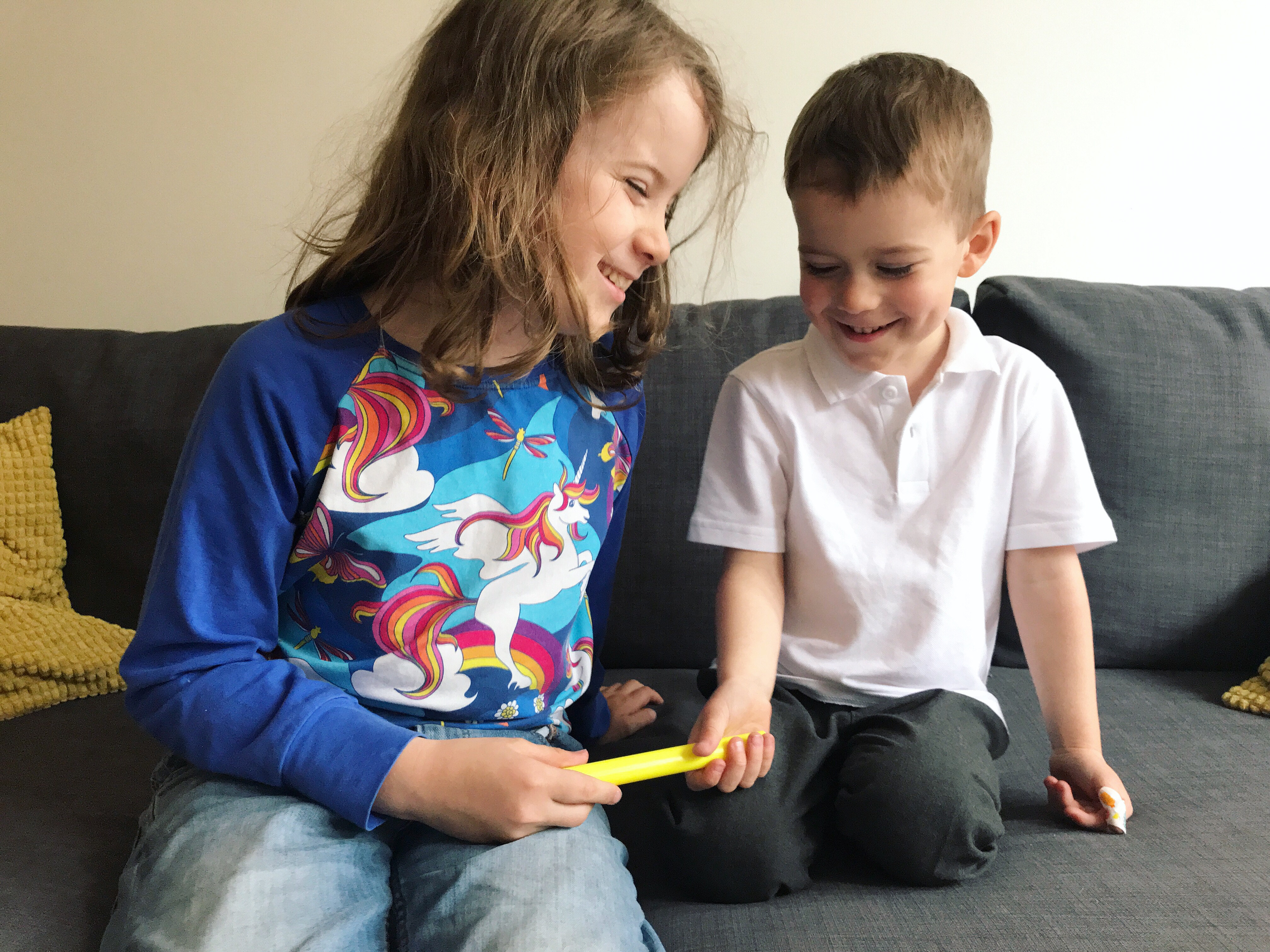 As soon as a challenge is completed, the referee flips the timer and reads out a new challenge for the other team. This keeps going back and forth until the timer runs out on a team and they lose that round. At the end of every round, the timer is reset and play starts afresh. The first team to win three rounds is the overall winner. 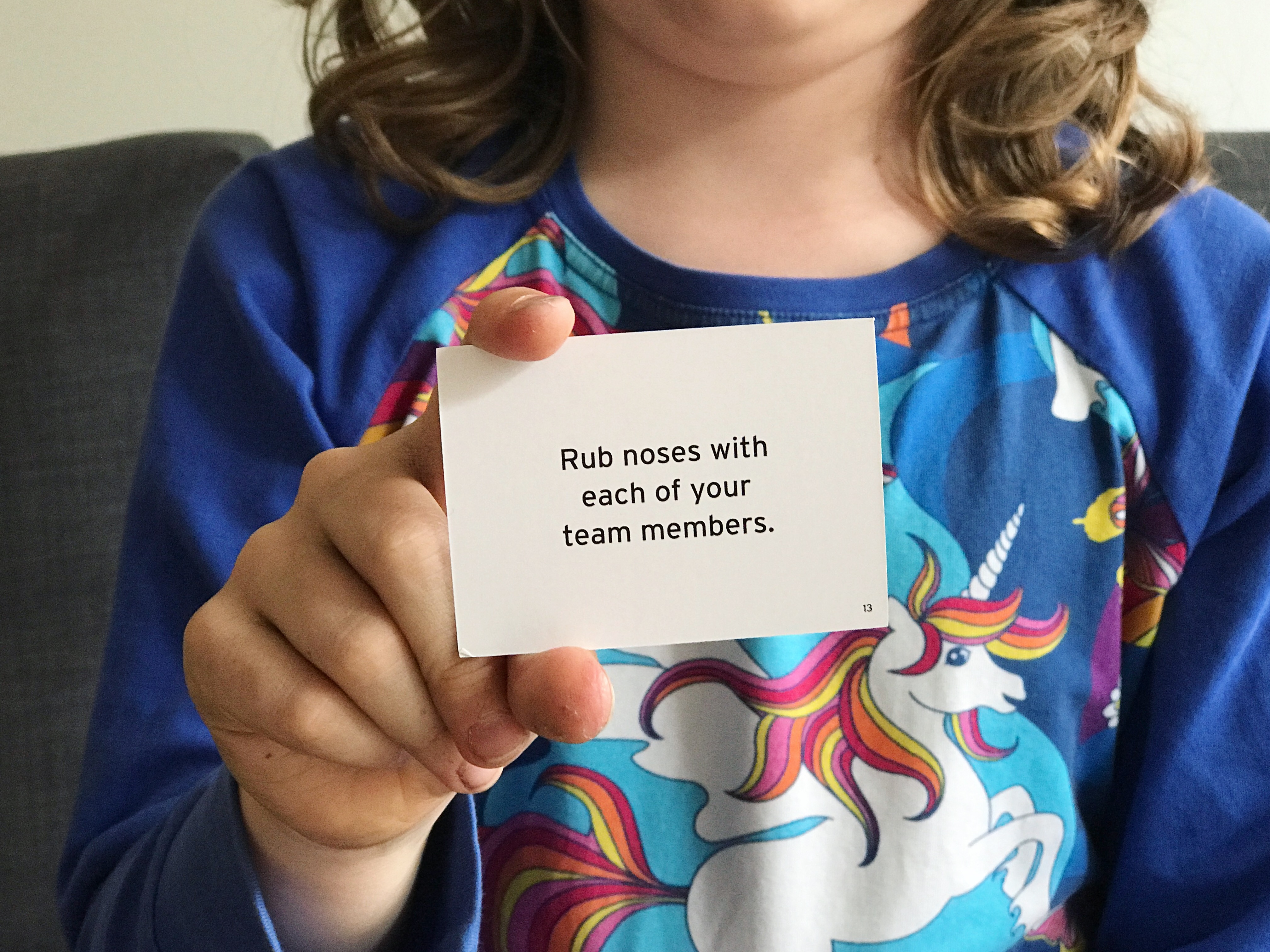 Challenges must be completed by the teammate next in the line with the baton, the rest of the team can’t help unless the card specifies so. For example, in this challenge you have to rub noses with each of your team members, which of course requires their involvement. Each team also has a ‘Help Card’, which if played means teammates can help complete a challenge, but you can only use this card once per round. 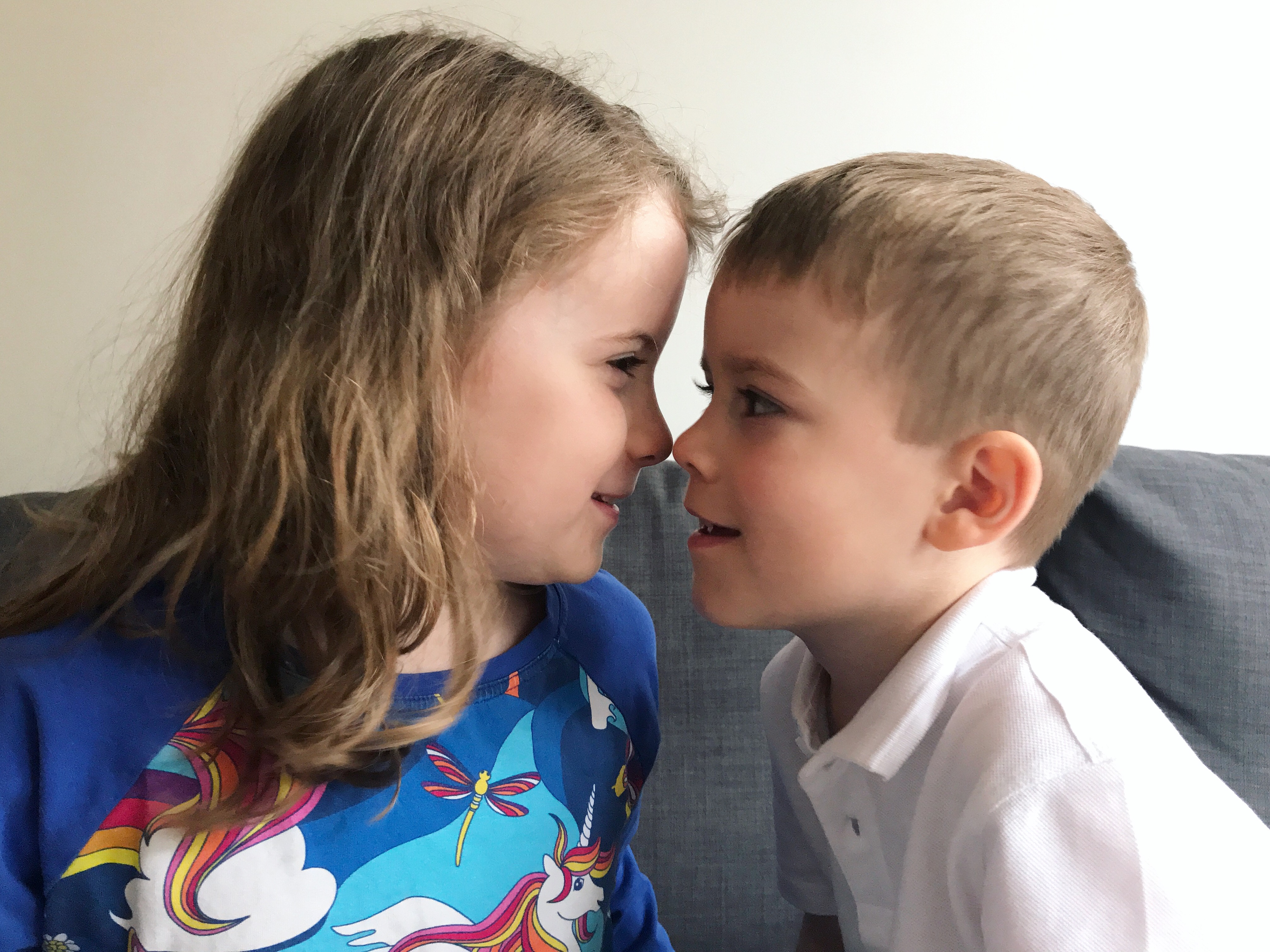 The challenge cards are double sided, and the referee can decide which side to use. The referee also decides if a challenge has been properly completed or not, and can insist on a replay before flipping the timer back over. It’s up to you how strict you want to be, we tend to be quite lenient. 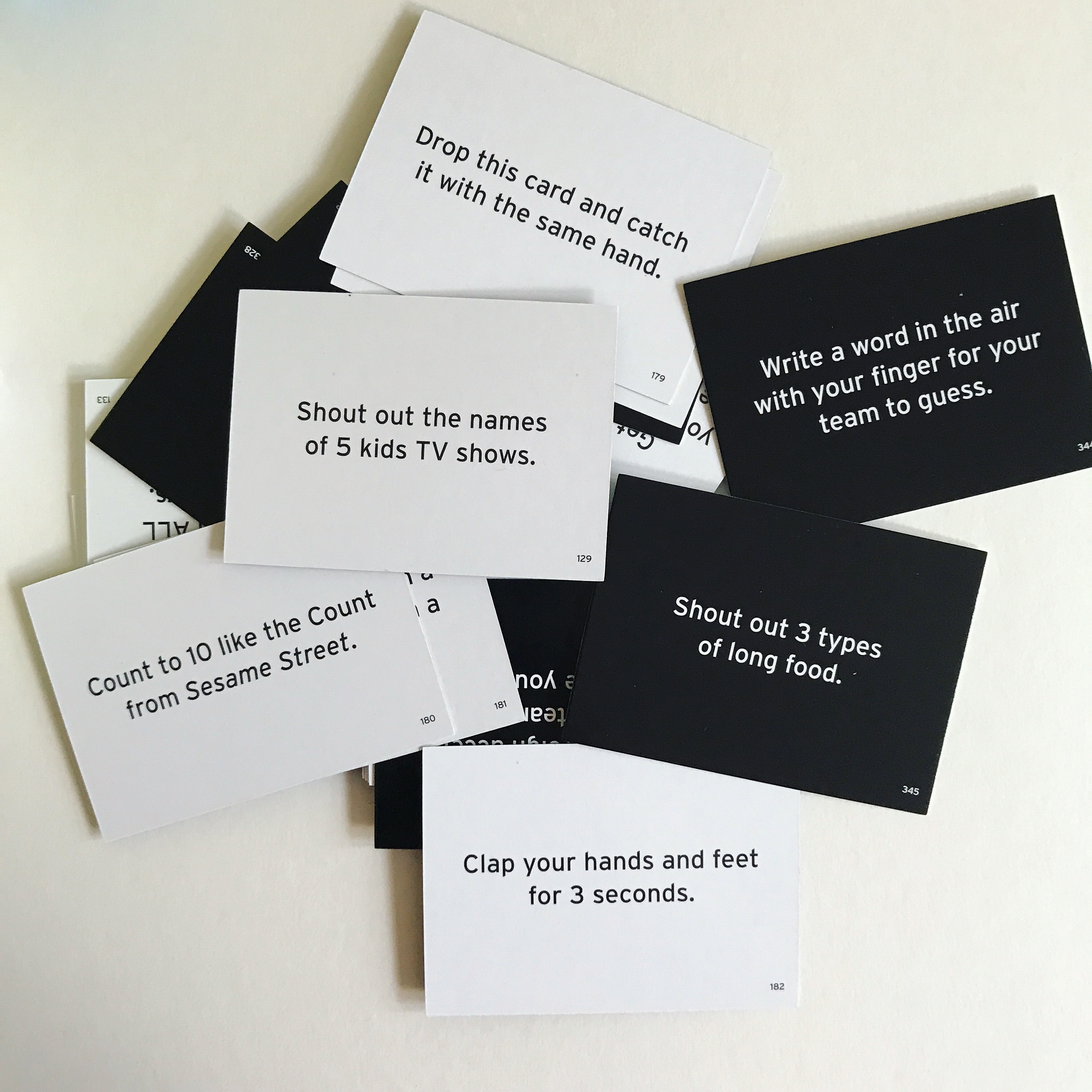 20 Second Showdown is recommended for ages 10+ but the folks at Big Potato Games assured us it would be fine for 8+ too since it’s a team game – especially if you are playing together with older players in the same team – and Oskar (who is 8.5) has been doing just fine with it. In fact, we have been playing it with all ages and our 4.5 year old has been enjoying joining in too. Some challenges are easy enough for him, and we just skip any cards for him that are too difficult. 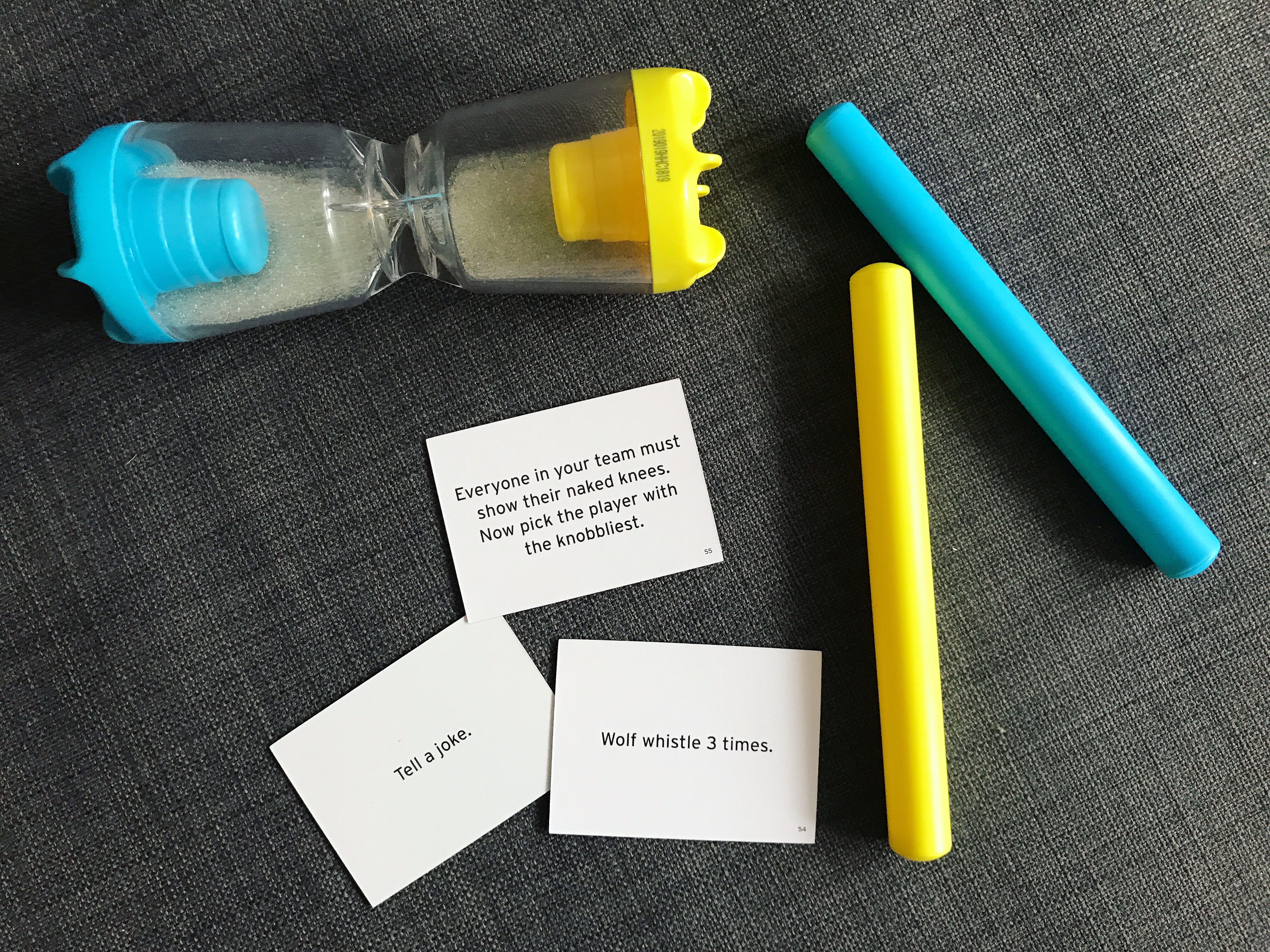 20 Second Showdown is a fun game that is perfect for families, for when you have friends over, of would even work great for a party. The rules are really simple to grasp, and you can be a bit flexible with the rules to include different ages – it’s all about having fun in the end! And with 400 challenges to choose from, it won’t get repetitive either.

Disclosure: We were sent a free copy of 20 Second Showdown by Big Potato Games in return for an honest review. All opinions are our own.