This past weekend, Saturday 9th November, marked the 30th anniversary of the fall of the Berlin Wall. I don’t think it’s an historical event that needs much introduction. It’s one of those ‘where were you?’ moments. On 9th November 1989, I was 11 years old, we were living in Scotland, and I remember it being on the news and my parents talking on the phone to our relatives in Germany. Having stood for 28 years, the Wall has now been down longer than it has been up! I thought this anniversary was the perfect opportunity to share an exhibition from Berlin with you, for my latest Museum Monday post – Yadegar Asisi’s Berlin Wall panorama. Asisi was born in Vienna in 1955 as the son of Persian immigrants. He went to school in Leipzig and later studied architecture in Dresden and then art in Berlin. He is the artist and mastermind behind several360° panoramas across various German cities, and his panorama ‘Die Mauer’ (Engl: ‘The Wall’) represents a selection of his experiences in a divided Berlin during the 1980s. 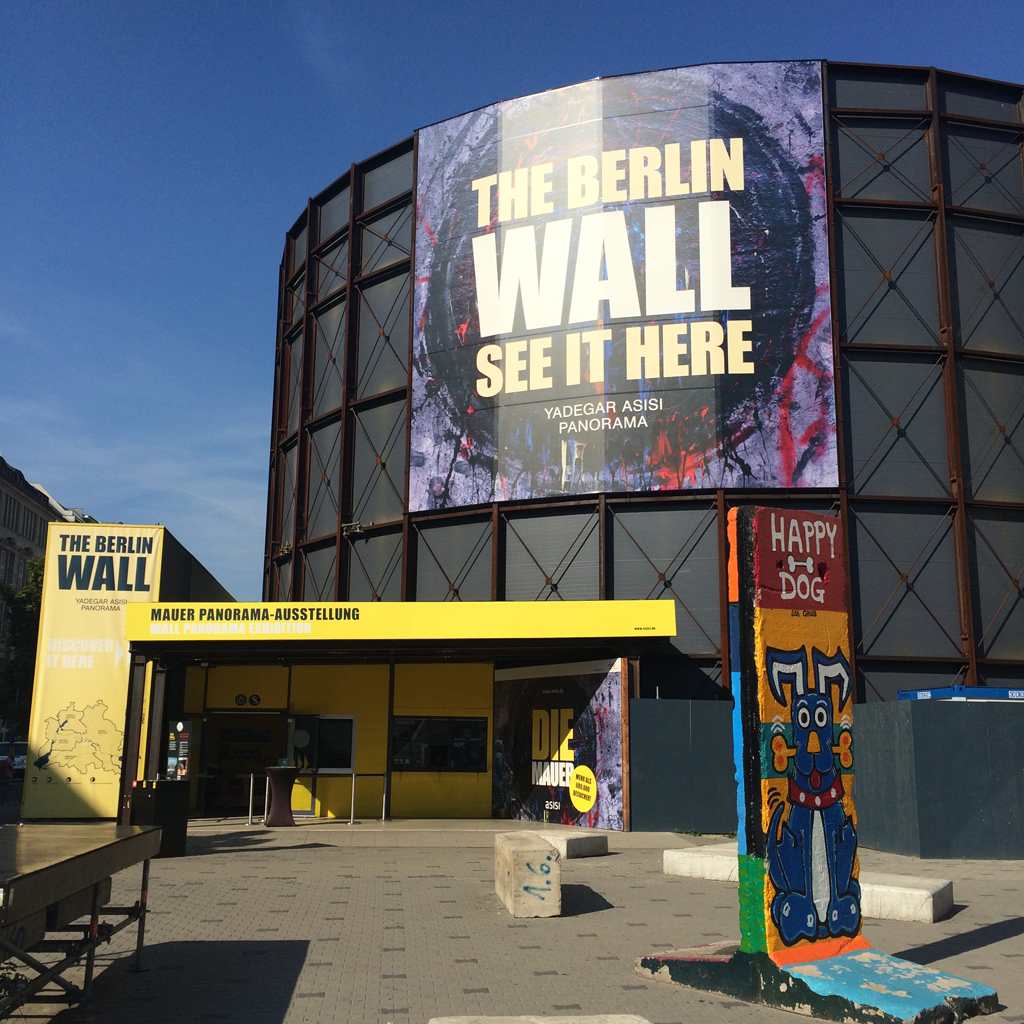 I visited the Berlin Wall panorama three years ago with Oskar, but the exhibition is still running so you can still go and see it now. We were actually invited by the panorama team, to come and review it from a family point of view. I have to admit, I did hesitate for a moment. Was the topic too intense for a six year old? But then again, he was living in Berlin at the time. The city’s history was all around him, from the remnants of the Wall you can find scattered throughout Berlin, to the markers in the ground showing its original route. So he already knew that “there used to be two groups of people in charge of Berlin, who could not agree how to run the city, so they built a wall to make sure everyone stayed in their half”. What we hadn’t spoken so much about was the impact all of this had on the everyday lives of people, but I felt he was ready to hear about it. So we were happy to accept the invitation. 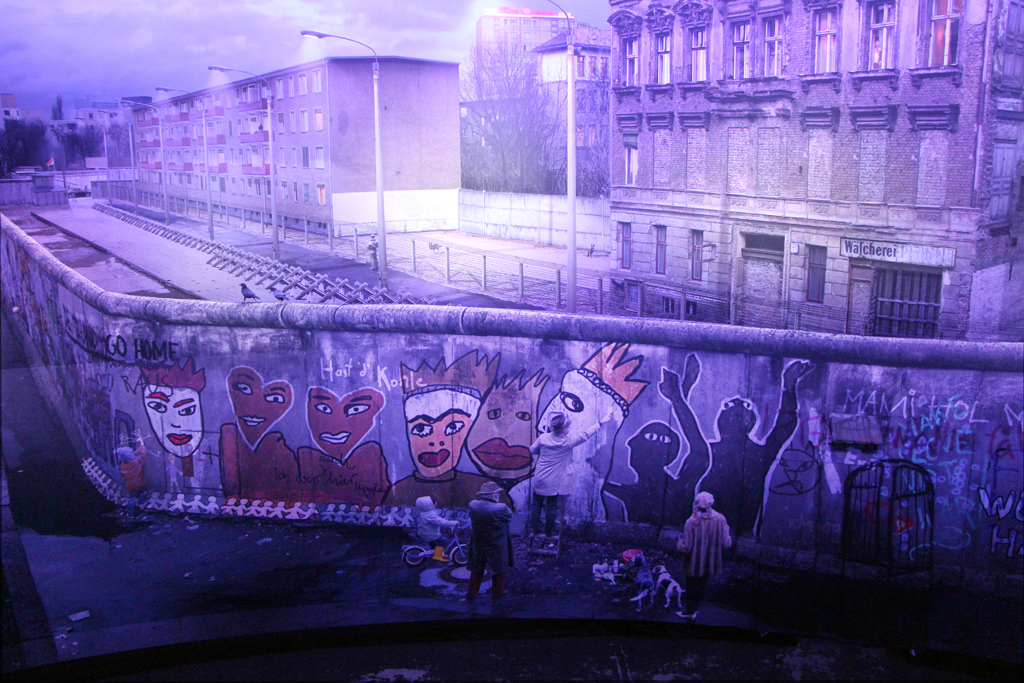 The ‘wow’ factor started before we had even stepped inside (see above). The panorama is a massive 15 metres high and 60 metres long, giving a total surface area of 900 square metres, so its sheer size alone was impressive for a six year old. Once we were inside, the first thing he said was “A Mercedes!”, pointing at one of the cars in the scenes in front of us. That’s my little motorhead for you, lol. We spent some time walking around the Panorama at ground level. One of our favourite museum games is ‘I Spy’, and the panorama was perfect for this – there was so much so see and spot. As well as passing the time, it also made Oskar look more closely at what he was seeing, in order to pick things for me to guess, or to guess what I was thinking of. His favourite part of the panorama was, no surprises there, the scene with the cars at the petrol station (see below). The artwork itself is a collage of painting and photography, with the final version being scanned in to a computer, and digitally printed on to large banners which are then hand sewn together. 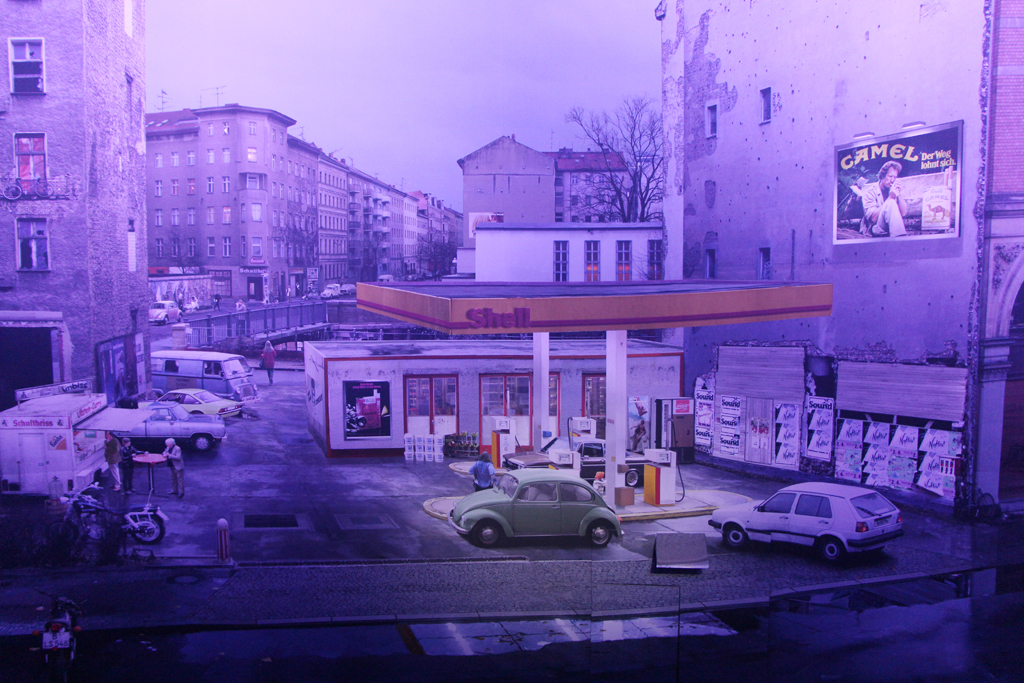 In the middle of the Panorama – which, unlike other asisi panoramas is not actually a full 360° – is a 4m high viewing platform. From there, we had a good look at everything again from above, and watched the panorama change from day to night and back again a couple of times. We also closed our eyes and listened closely to the audio soundtrack of daily noises, such as traffic. What else could we hear? This turned out to be another great game Oskar really enjoyed. Mixed in with the daily noises are extracts of historical speeches and snippets from the international press conference in 1961, two months before the Wall went up, but he wasn’t really that interested in those, which is fair enough. I think it went a bit over his head. 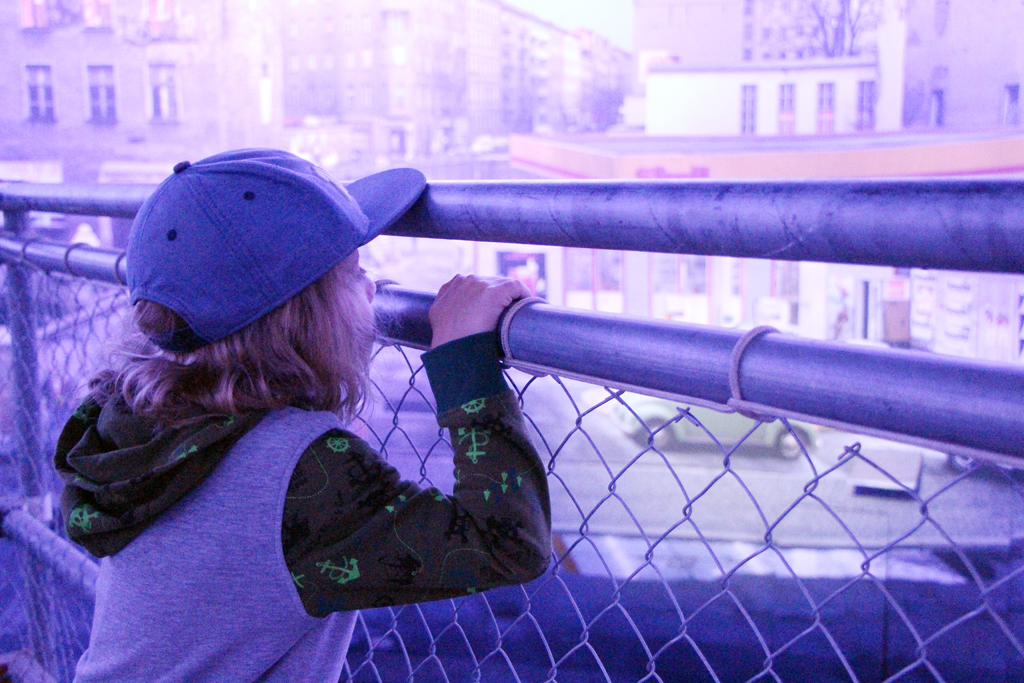 Something that was more relatable to him, was when we talked about families being separated. He was just at that age when separation anxiety kicked in any time beloved guests, such as grandparents, had to leave.  When saying goodbye brought on the waterworks before they’ve even left the house. So I asked him to imagine living in a divided Berlin. To imagine that he wouldn’t see Oma and Opa again, for a very long time, maybe for years, because they lived on the other side of the wall. ‘What about in the holidays?’ No. ‘What about on my birthday?’ Nope. ‘Christmas?’ No, not ever. You could really see his little brain ticking away in his head as he thought about this. 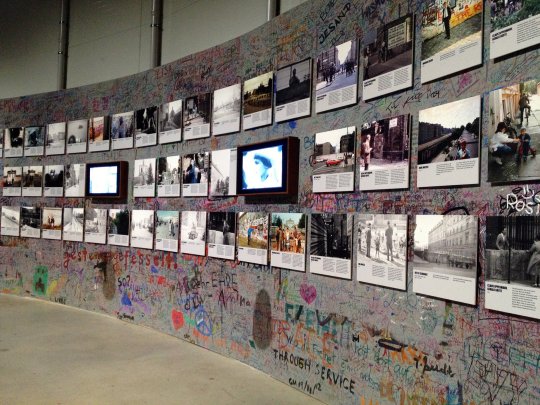 In the vestibule of the panorama, an accompanying eye witness exhibition with around 200 personal photos submitted by the public, shows daily life around both sides of the Berlin Wall. We looked at some of the photos, and talked about how the Wall went up. He asked about pictures showing big rolls of barbed wire, and I explained that once the people in charge of Berlin decided to build the Wall, they wanted to get started as quickly as possible so they put out the barbed wire first, to show people which side of the city they were allowed in. And that it had caught many people by surprise, who suddenly found themselves cut off from their families, on the wrong side of the barbed wire. ‘Imagine’, I said to him, ‘that one day daddy couldn’t get home from work (his office was just within the borders of the former East Berlin) because he was one side of the barbed wire and we were on the other side. How would that make you feel?’ It would make him feel really, really sad, he said. And that he would probably cry a lot. He’s a pretty compassionate little guy anyway, but I think this exhibition was a real eye opener to him. He knew about the wars going on, in Syria and other places, and how children his age are affected by that. But learning more about the darker history of the city he called home, about something that happened, if not within his but within his mummy and daddy’s lifetime, was quite personal. He surmised that grownups ‘are very silly sometimes’ and that ‘people should just be friends’. I couldn’t agree more. And I’m very glad I took him to see ‘The Wall’ panorama. 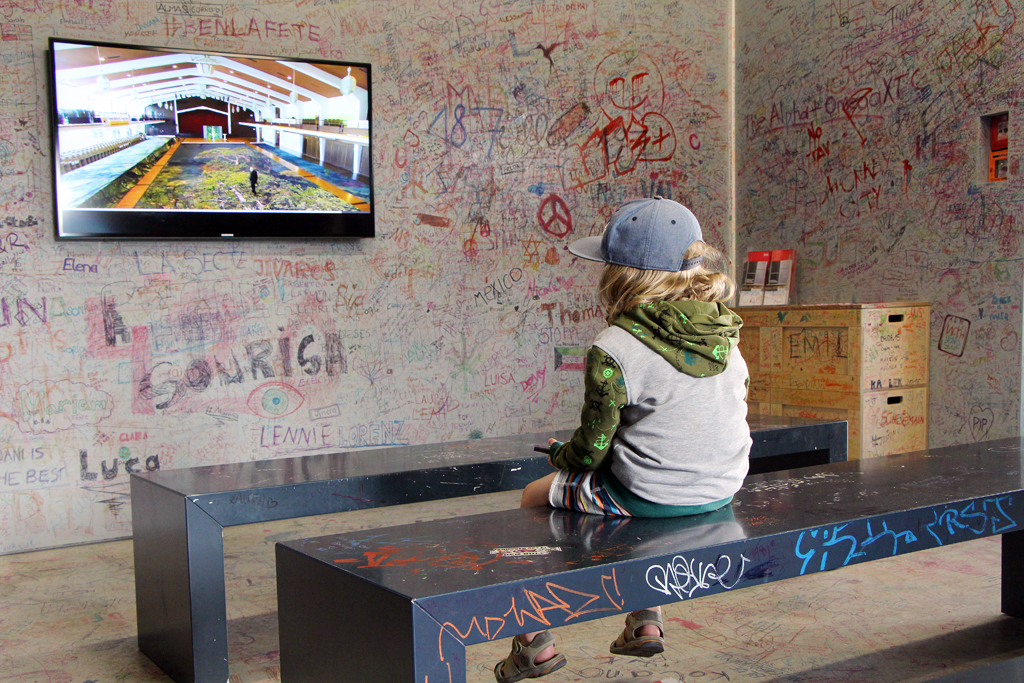 As well as the accompanying exhibition, there was also a video screening showing the process behind how the panorama and others like it were made. It featured Yadegar Asisi himself, talking about his journey from initial idea to the final product, with scenes e.g. of a photo shoot to capture specific scenes, and how the photos are then processed and integrated in to a panorama. Oskar was absolutely fascinated by this video, and watched it twice from beginning to end. 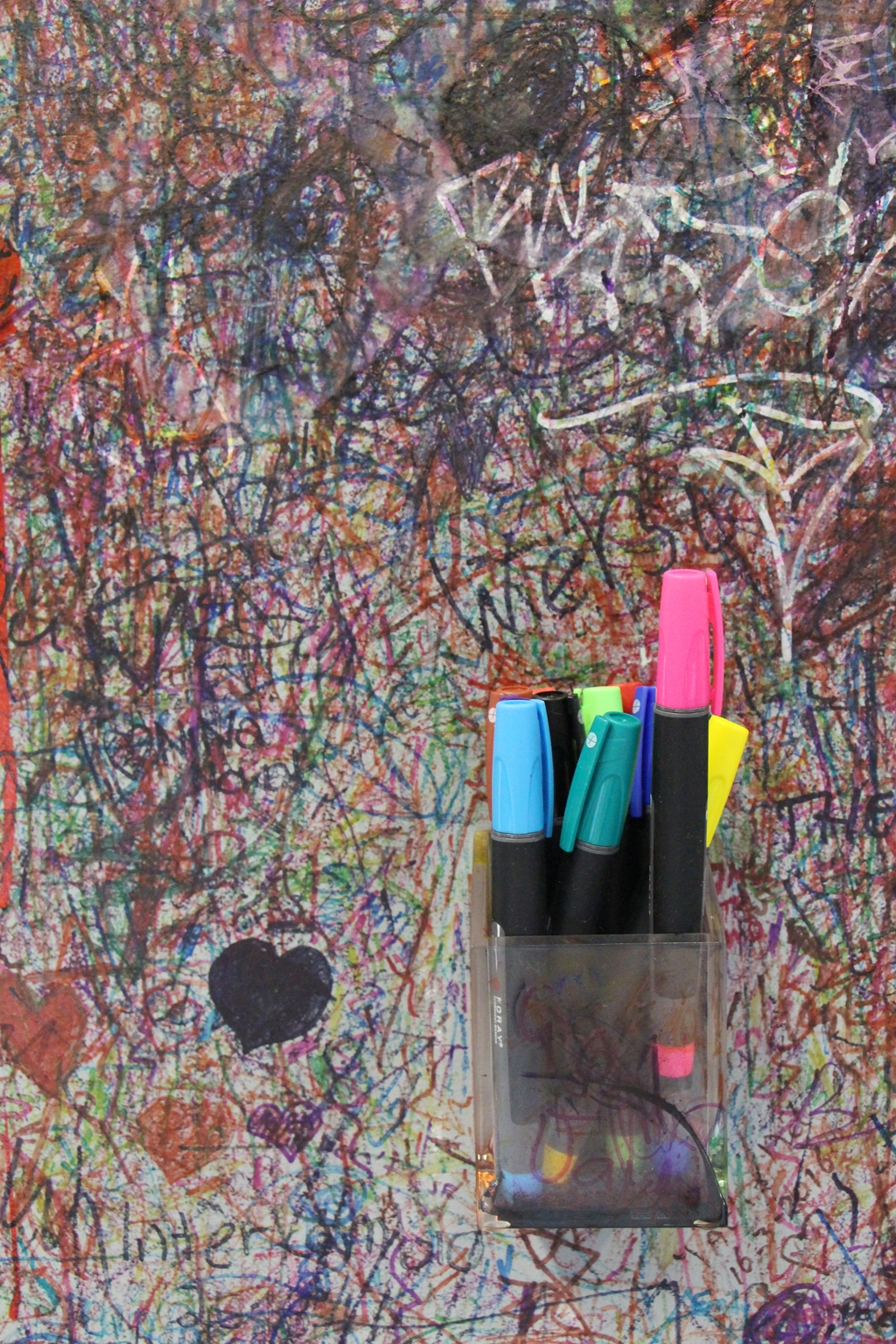 Finally, before we left, we left our mark on the graffiti walls, where visitors could share their thoughts about freedom – or just sign their names – in their own words and own language. There were pens supplied in a little holder on the wall (the walls are so colourful by now, the pens are quite well camouflaged and I ended up asking where to find them, lol). 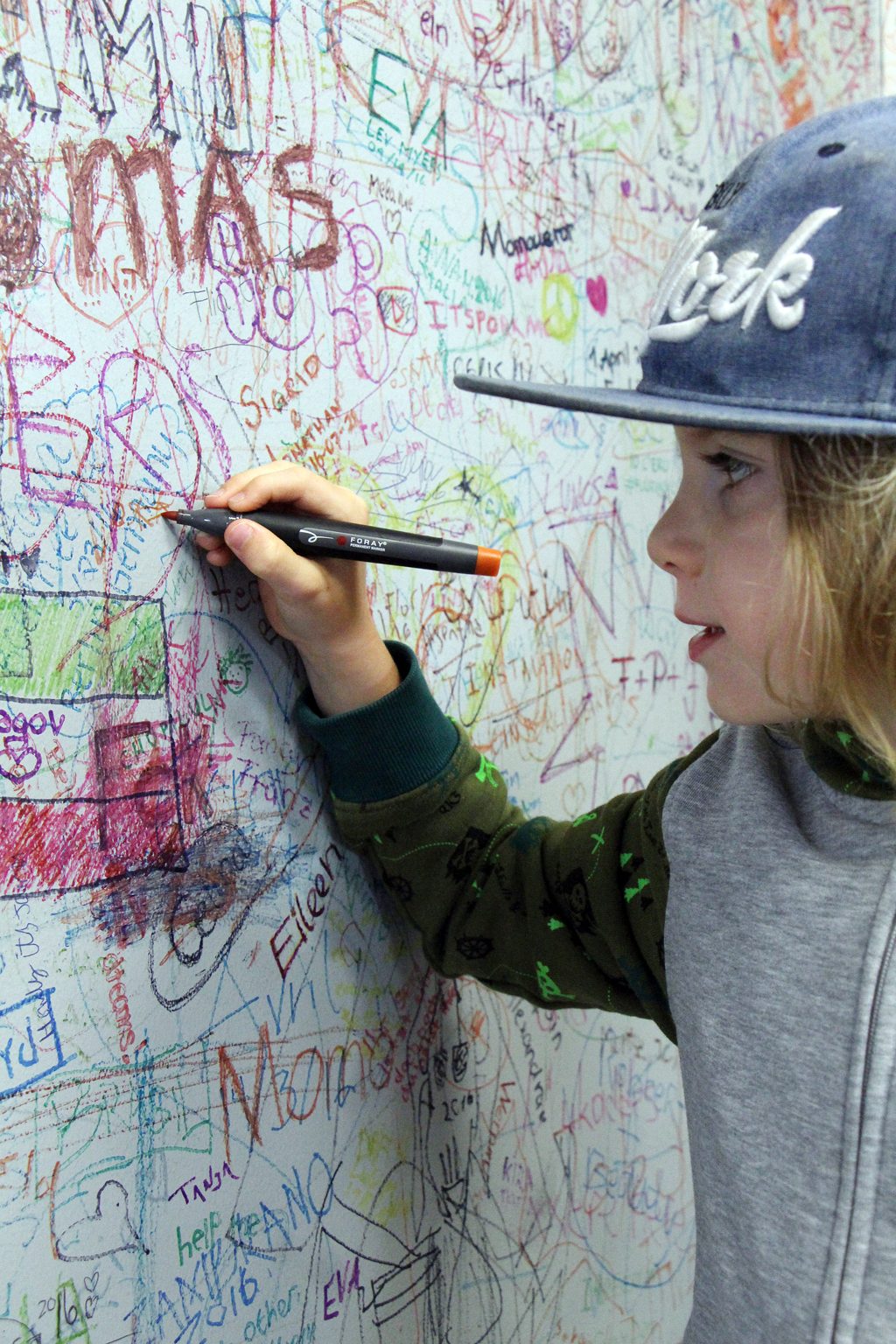 In conclusion, and considering my initial hesitation, I have no regrets taking my (almost) six year old to see the panorama ‘Die Mauer’. Would I recommend it for other children that age? This may sound like a cop out, but it very much depends on your child. Oskar has been visiting museums of all kinds since he was just a few weeks old, so I didn’t doubt that this type of museum would be suitable for him. In terms of the content, as mentioned above, we talk with our kids about what is happening in the news, from world politics such elections in Germany, the UK and the USA, to wars and conflicts happening around the world (everything obviously rephrased and contextualised in words and ways they can understand at their age). We therefore felt that the topic would not be too advanced for him, especially since it related directly to the city we were living in. So whether you think your child is old enough or mature enough to visit this exhibition lies partly in your estimation as their parent, but I may also add that children age 6+ require a ticket (children under age 6 have free admission), which is an indication of the exhibition’s target audience. 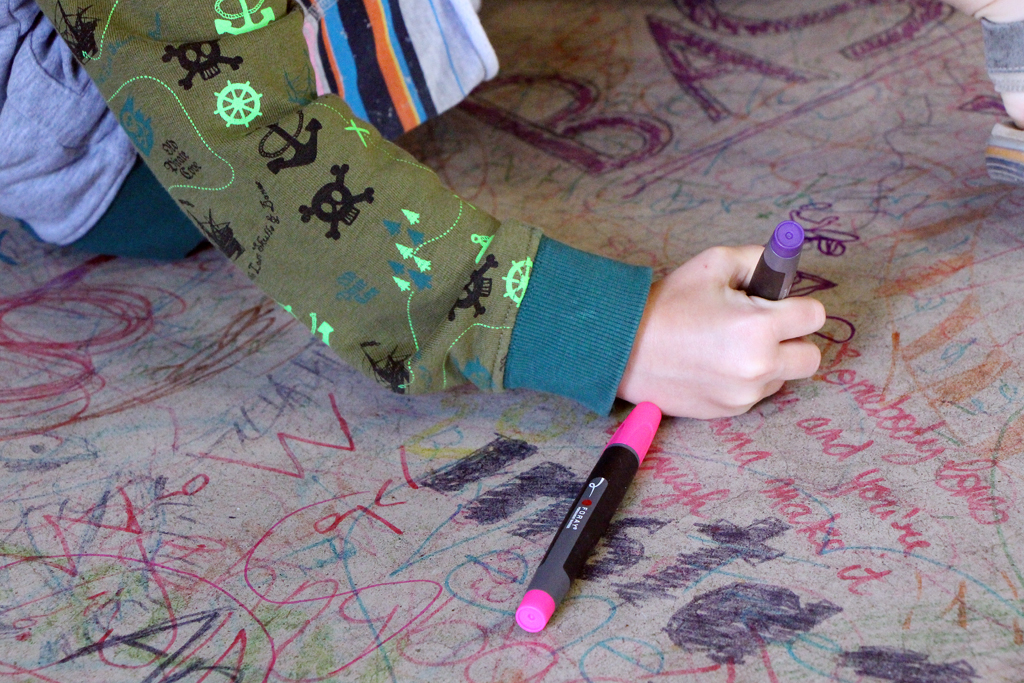 The panorama ‘Die Mauer’ is open daily.Full details on opening times and admission prices can be found on the Panorama’s website. Apart from the viewing platform, the rest of the venue is accessible for wheelchairs.

Disclosure: We were invited to visit and view the exhibition free of charge. However, all views and opinions expressed in this post are entirely our own.