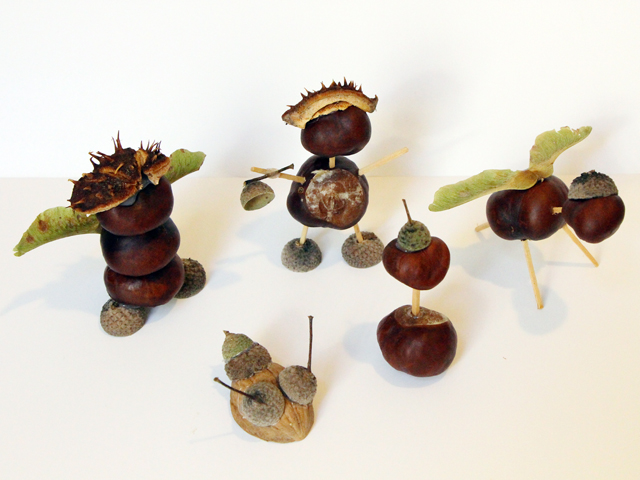 It’s been three years since we last did some Autumn crafts with chestnuts, but now that we have a massive chestnut tree in our yard, since moving house last year, we really no longer have an excuse not to. We already collected a great big bag full of shiny chestnuts the other week, then ended up taking them all in to school as that week’s homework assignment was ‘collect as many chestnuts as you can’. But there are loads more where they came from – the best time to collect them being at the weekend when our building’s janitor is off duty, before she sweeps them all away! As I mentioned three years ago, it’s popular to string chestnuts up for a game of conkers in the UK. Sadly, unheard of here in Germany. In stead, a popular Autumn activity here with kids is to make your chestnuts in to little creatures. Last time, we just stuck to making simple people out of just chestnuts and toothpicks, this time we took it to the next level and also used other Autumn bounty we had collected in the past weeks: chestnut cases, walnut shells, maple seed pods and acorn ‘hats’! Besides the natural materials, we had some tools to help us too. Last time, I used a manual drill to make holes in the chestnuts, but this time we again levelled up and bought a ‘chestnut hole making kit’. Yes, that’s how seriously they take their chestnut crafting here, you can actually buy a kit for it. You screw your chestnut in place in the wooden holder, then use the little metal screws to bore holes in it. Initially, I said this was going to be for adults only, but the kids had other ideas (see below). My older boy said he’d already done this in school anyway, and the little one just grabbed the tools when no one was looking and started boring chestnuts! Oh well, unlike the drill I used three years ago, this was at least a lot safer. The glue gun, however, was strictly off limits to them! Sh** that thing is hot when you accidentally drip molten glue on yourself. Our final tool was a box of matches (we’d run out of toothpicks). I’d unsuccessfully rummaged through two boxes for our bag of google eyes, so our chestnut creatures remain eye-less. My older boy knew exactly what he wanted to make first: a flying horse! No surprises there, since winged unicorns are his favourite animals. I’m just surprised he didn’t add a horn too. The first step was to drill holes in a large chestnut and a smaller chestnut, then add matches for legs and a neck. He then showed me where the maple seed pod (the wings!) and the acorn hat should go, and I glued them in to place for him. Meanwhile, his little brother was having the time of his life making holes in chestnuts during the two minutes or so that no one was paying any attention. Monkey see, monkey do, is totally is motto. Anything his brother can do, he can do too. At least he thinks he can. But it all turned out well. I had to help him a little to fix the two chestnuts and matchstick in place (needed to add a little extra glue as he’d made the holes too big), and again, glued an acorn hat on. But it was all his own creation. He told me exactly what he wanted where, through yes/no and lots of pointing. It looks quite simple compared to our other creatures, but he was very adamant that he didn’t want to add anything else. And he very proudly pointed out *his* chestnut creation to daddy later on. I have to say, I was quite proud of him too. The boys wanted me to make a chestnut creature too, and since I was a bit too lazy to faff around with the hole making tool, I just glued all of mine in to place. Lol. I gave my little creature some acorn hat feet, and then, because he looked too much like a brown version of a snowman, added a chestnut case for some hair. Or a spiky hat. Whichever. My older boy suggested I also add a maple seed pod because he thought we needed more chestnut creatures with wings, so I obliged. Here’s my finished creation: With a little help, my older boy then made another little chestnut man himself. Apparently, this is Super Mario, holding some kind of shield/ray gun with which he can freeze people. It’s from a video game, he says. I have no idea, I’ve only ever played Mario Kart, not the other games. Our final creation was a snail we made together. Isn’t it cute! And here’s a finished picture of that flying horse again: Have you made any chestnut creatures before? Why not give it a try! I would love to see some photos if you do. Please feel free to share them with me on Instagram or Twitter.