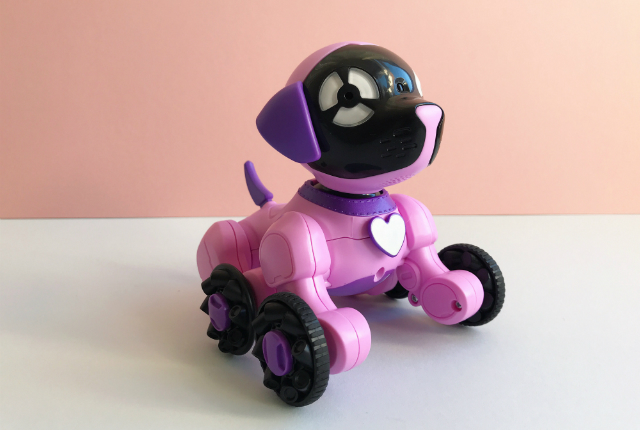 My boys would love to have a pet, ideally a cat or a dog, but unfortunately their daddy is allergic to pretty much everything. So a goldfish somewhere down the line is probably the closest they are ever going to get to having a pet. Then I got thinking, maybe if they’re not going to get the puppy they wished for, perhaps some kind of robotic dog would be a compromise. So when the lovely Ane from Wire PR offered me the opportunity to review one of the “Chippies” robot dogs from WowWee, I jumped at the chance. So what’s in the box? The box contains one WowWee Chippies interactive pup, one remote control, and an instruction manual. The remote control is ready to go, but the pup itself requires 4 AAA batteries, which are not included, and you’ll also need a Phillips screwdriver to install them. The Chippies pup comes in four different varieties and colours, and we got “Chippette”, who is pink, but if you’ve been following the blog of my Instagram for a while you will know that my elder son’s favourite colour is pink, so I know he is going to love this. A pink robot dog sounds like all his dreams come true! What can Chippette do? Chippette actually rolls around on wheels. She has poseable hind legs, but performs best when in an upright position (in the photo above she is pictured sitting down). She has light up eyes, and touch sensors on her head. There are two ways of controlling Chippette – with standard controls, similar to a remote control car, i.e. forwards, backwards, left, right. And then there also some pre-programme settings, including guard, sing, dance, and free roam. If she comes up against a wall or obstacle that is tall enough to trigger her sensor, Chippette will turn and move on in another direction. There are also some “secret” controls, mentioned in the instruction manual, where by pressing a combination of buttons you can get Chippette to how, whimper, spin in circles, and also wee and fart! I know my boys will find the latter particularly hilarious!

In addition to use the remote controls, you can also interact with Chippette through touch. By tapping one or twice on her nose, you can get her to sniff, lick, bark, sneeze or kiss, but she doesn’t like it if you touch her nose for too long and will whimper in response. If she is in guard mode, she will also react if you try to touch her. I’ve made a little video to show you all the different controls and modes of Chippette in action:

You may be wondering why, unlike some of my previous reviews, I’ve chosen to review this toy without getting the boys involved. That’s because I really want to surprise them with this at Christmas! But having played with it myself for quite a while, I am very confident that they are absolutely going to love it. It’s a dog, it’s pink, it’s remote controlled. Basically three of their favourite things.

As mentioned above, the WowWee Chippies come in four different colours, including black with yellow/orange (“Chippo”), blue (“Chipper”) and grey with pink/purple (“Chippella”). They are aimed at ages 5+, but I already know that all the tea in China won’t keep my 3 year old away from this toy. But he’s used to handling remote controlled cars, so I think he will be fine with the dog. WowWee Chippies are available from various retailers, including Amazon and Toys R Us. The RRP is £49.99, but I have seen them on sale in the run up to Christmas for as little as half that price, so it’s worthwhile shopping around.

Disclosure: We were given a free WowWee Chippies robot dog to review, but all images, words and opinion are our own.