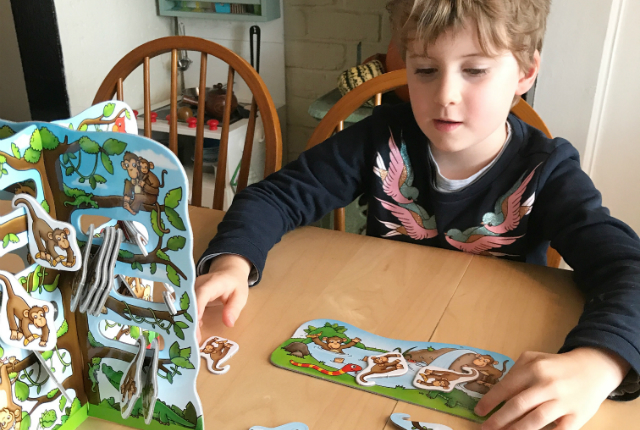 As I’ve mentioned here on the blog before, we absolutely LOVE board games in our house. We have a whole cupboard full, including many favourites from when I was a child. So when I was contacted by Orchard Toys, asking if I would like to become an Orchard Toys blogger, I jumped at the chance! Especially since we are already fans of Orchard Toys, and already own several of their games and puzzles. What it basically means, is that I will be able to review and share even more of their great games with you here on the blog. For those of you who haven’t heard of them before, Orchard Toys produce games that are both fun and educational – always a winner – with bold and colourful illustrations. We have yet to try a game of theirs that we haven’t enjoyed.

So, the first game that we were sent to review, is Cheeky Monkeys: What’s in the box? In the box, you will find two tree pieces which slot together to make a 3D tree; 32 monkey tokens; 1 spinner board with spinning arrow (you need to assemble this before you play for the first time); and a ‘pool; board.

Before you start playing, slot together the tree and spread the tokens on the table, monkey side down. Place the spinner and the ‘pool’ board within reach. You can play the game with 2 to 4 players, and each player chooses a coloured section of the 3D tree. Game Play: When it’s your turn, you spin the spinner and there are four different actions it can land on. If it lands on bananas, you turn over a monkey token. Some of the monkeys are holding bananas, either 1, 2 or 3. There is also one coveted token, with a monkey holding 6 bananas! But there are also some monkeys not holding any bananas at all. You can hook the monkeys on to your section of tree, or decide to spin again to try and get more bananas. As long as the spinner keeps landing on bananas, you can keep going as long as you like or decide to stop at any time and hang all your collected monkeys on your section of the tree. BUT if the spinner lands on one of the other actions, your turn stops immediately and one of three things happens: If you get the pool monkey, you lose all the tokens collected in that turn and have to place them on the pool board. If you get the question mark, you can collect any tokens that are on the pool board. And if you get the cheeky monkey, you can steal a token from another player (a chance to get the coveted 6 bananas card!). Any stolen or collected tokens from that round then get hooked on your section of the tree, and the game moves on to the next player. The game ends, when there are no monkey tokens left on the table. Any monkeys not collected from the pool by this point, stay in the pool. Everyone now counts how many BANANAS (not monkeys!) they have collected. The player with the most bananas wins. What we thought: The boys were really keen to play this when it arrived, as soon as they saw the monkeys! We had it set up in no time, and were ready to go. It’s billed for ages 4-8 but the game play is so simple, that even my almost 3 year old could play it with a little help. If it were up to him, he’d just steal a monkey from someone on each turn, apparently when you are 3 this is hilarious! But he had no problems understanding what he had to do, and both spinning the spinner and hooking the monkeys on to the tree were great for his fine motor skills. He can already count up to 20, so with a little guidance he was even able to count up his bananas by himself at the end of the game.

My almost 7 year old didn’t need any help at all, he quickly grasped the instructions and got very excited at the possibility of taking a gamble to collect more monkey tokens. Though after losing a big pile of tokens to the pool, he got a little more cautious on following rounds. There were a few tears, when he first lost the tokens – especially when someone else then won them from the pool – but once he realised it wasn’t about the number of tokens but the number of bananas, he quickly changed his strategy to trying to hold on to the ‘six bananas card’. The strategy obviously works for him, because he has now won several games where he had the least number of monkey tokens but still had the most bananas at the end. Obviously, he is old enough to count by himself without any guidance, but we try to encourage him to add up the bananas on the cards (e.g. 1 + 3 + 6) rather than just counting them out like his little brother does. My conclusion: This game has become an instant favourite, with many shouts of ‘Monkeys!!’ when asked what they would like to play after school/nursery. As mentioned above, it’s great for fine motor skills and counting for the little ones, and for older kids adding up and developing their strategic thinking skills. One thing I would say, is that the boys found it a bit boring if they got the cheeky monkey or question mark early on in the game, when there was nothing yet to steal or win, but since this is down to the luck of the spinner and doesn’t happen in every game, it’s not really a big deal breaker. Overall, this is a game we have been playing again and again since it arrived. It takes around 10 to 15 minutes, so is great for a quick round before dinner time, but we have also played several rounds in a row when we’ve had longer, e.g. on the weekend. With an age gap of four years between the boys, it’s often tricky to find games that both will enjoy, but for this hits the spot. A great game for the whole family, and one I would definitely recommend. Cheeky Monkeys is available from the Orchard Toys website, and retails at £9.50

Disclosure: We received a free copy of Cheeky Monkeys from Orchard Toys, in return for an honest review. All images, words and opinions are our own.