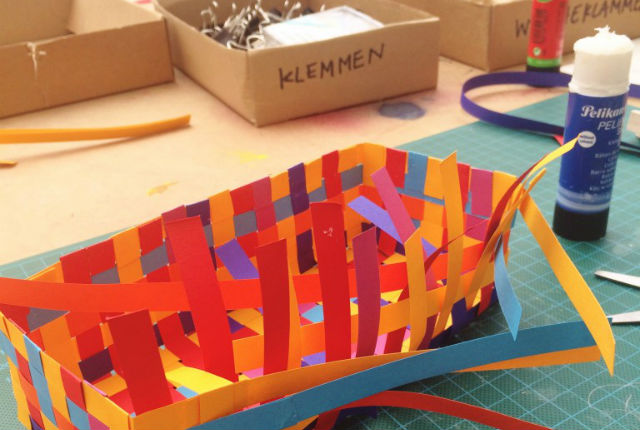 For months now, I’ve been meaning to take Oskar along to one of the Saturday drop-in ‘Bauhaus_lab‘ craft workshops at Berlin’s Bauhaus Archiv, and last weekend I finally managed to go! 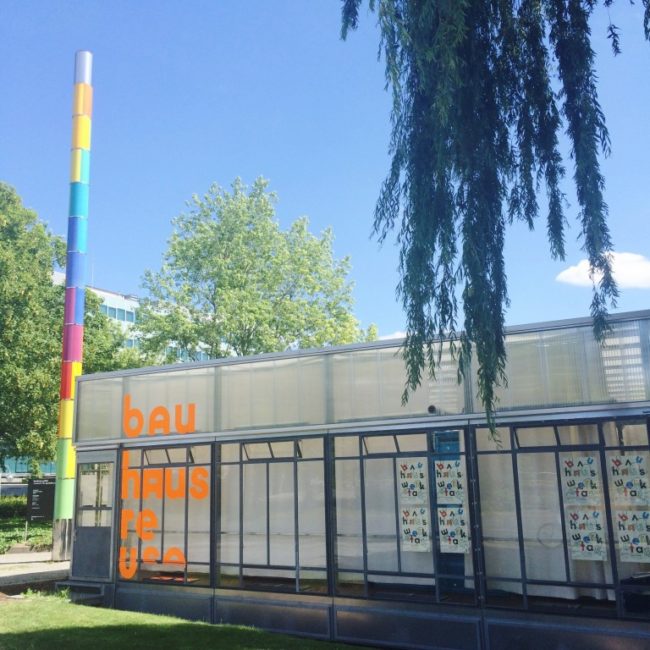 The workshops take place on Saturdays from 11am to 2pm in the Bauhaus Pavilion, which is separate from the actual museum itself though on the same site. It’s free to take part, and you don’t need to book in advance or turn up at 11am sharp, but the sessions are popular and they do fill up, so if you come too late you may not get a space. 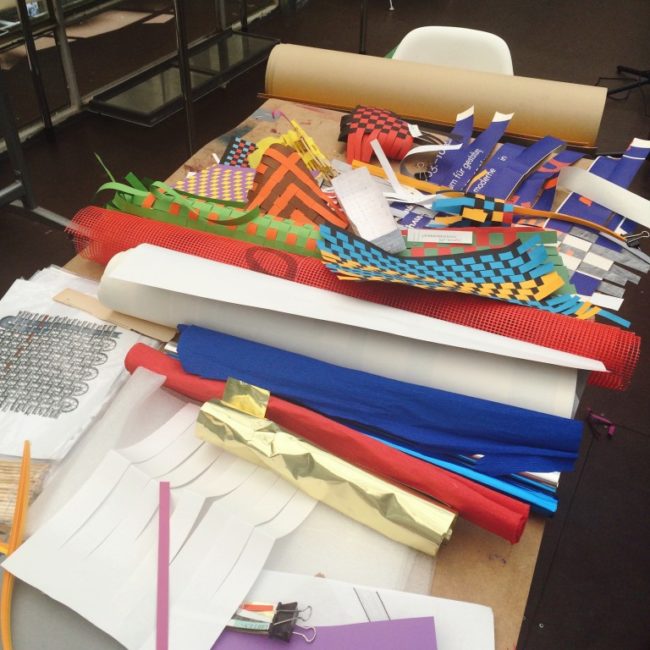 Every week they have a different theme. Last Saturday, it was all about paper weaving, to tie in with the current special exhibition about textiles at the Bauhaus Archiv. At the easier end of the scale, the kids could weave some place mats or book covers, at the more difficult end of the scale there was Japanese book binding, woven cubes and baskets. Of course, you can guess what Oskar wanted to do! I tried to persuade him to choose something easier, but he had his heart set on taking home a woven basket… 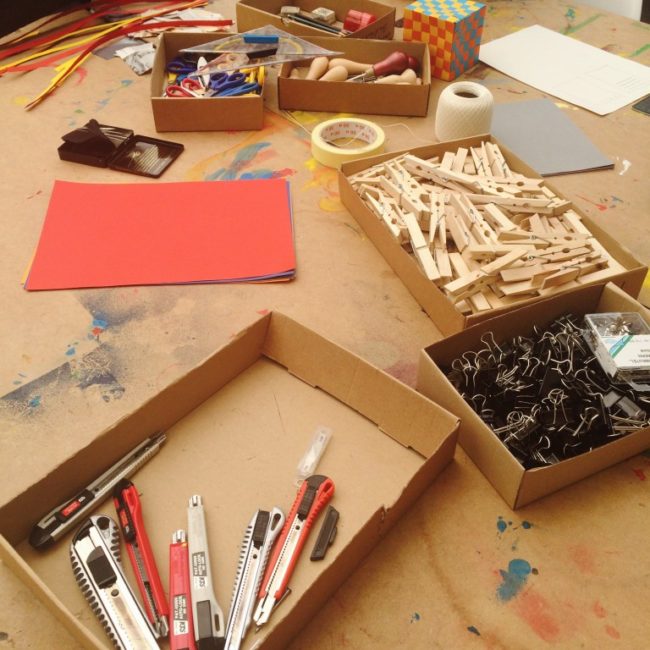 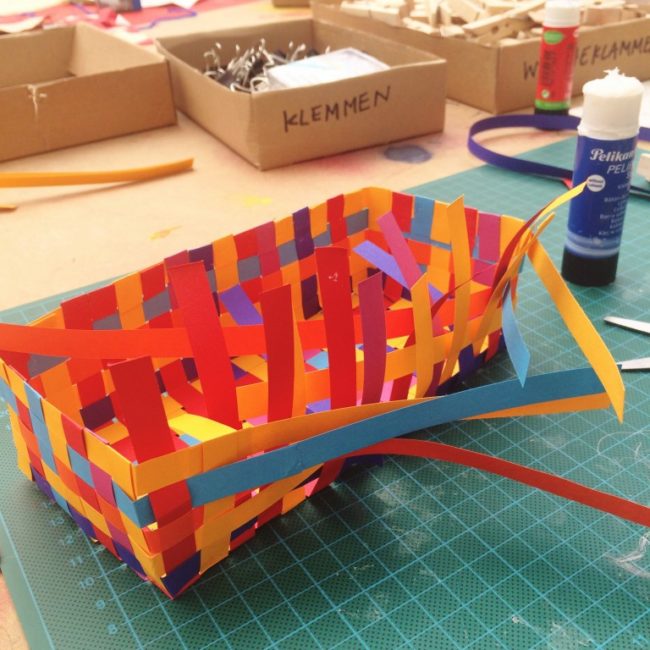 It panned out exactly as I had expected: he helped me to select the coloured strips of paper and put them in the order he wanted, then he wove the first couple of strips, after which he declared it was too difficult and switched to the role of artistic director whilst I was left holding the baby. Or in this case, the basket. Once I got to the end, he then stepped up again to trim the ends of the paper strip and apply the glue to keep it all in place. Naturally, when we got home, he showed off the basket “me and mum made” to Daddy. Ahem. 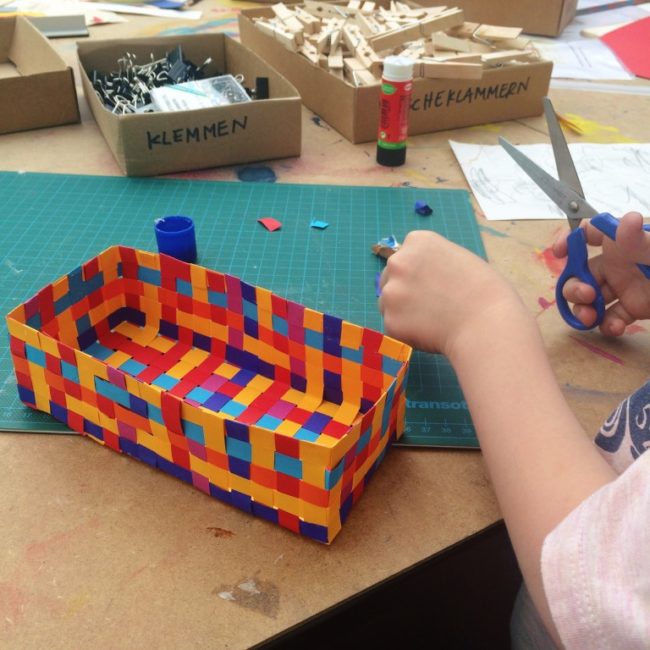 We also had a chance to go over and see the exhibition at the museum itself. We had to go as a group with one of the workshop leaders (so that they would let us in for free, as you usually have to pay admission), who showed the kids some of the pieces that had inspired the weaving activities. I think it was great they included that, otherwise it would have just been a nice craft workshop with little relevance to the museum – as an adult, with some knowledge of the Bauhaus Archiv, I would have been able to make the connection without going over, but Oskar, not so much. 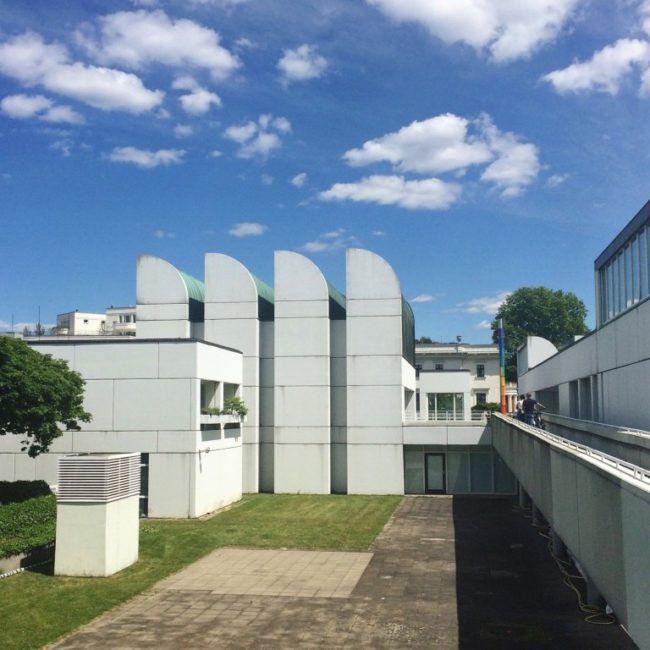 All in all, we spent an enjoyable morning at the Bauhaus_lab. Even though the paper weaving wasn’t quite up Oskar’s street, he wants to go again and try something else. The sessions are currently only funded to run until the end of June, but they are hoping to get it extended until the end of the year. I really hope they do, because it’s great to have something like this – fun, free, making museums accessible to children, *and* at our end of town (it was less than 15 minutes walk from our house). Apparently many of the families who come are regulars, and who knows, maybe we will become regulars too if they extend it. So if any decision makers happen to read this, I’d like to say to you: “Do it! Extend it! Berlin’s kids needs this!”

EDIT [01/02/2020]: The bauhaus_lab craft sessions are still going strong! However, the whole museum is undergoing a renovation, so the sessions are currently located at the temporary bauhaus-archiv, Knesebeckstr. 1-2, Berlin-Charlottenburg