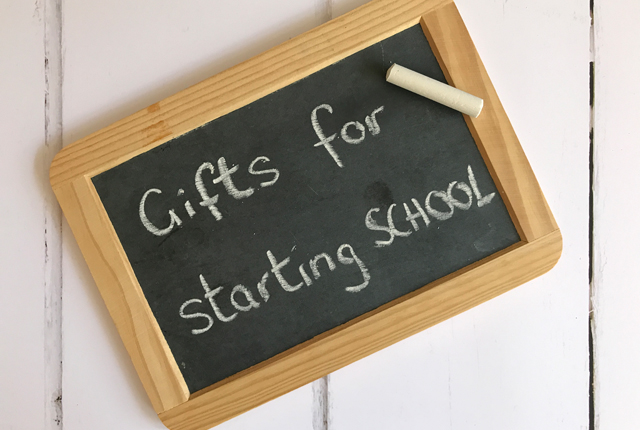 I can’t believe that my youngest will be starting school in just four weeks! In Germany, this was a very big deal. When Oskar started school in Berlin three years ago, they had a big enrolment ceremony on the Saturday before their first proper day. The older classes put on a show with singing and dancing, and then each class went to meet their teacher, their new classmates, and their classroom. The P1 induction session that we attended here in Edinburgh for Mr Fox was nothing in comparison. And it doesn’t stop there – as well as receiving a “Schultüte” (a large cardboard cone) filled with little treats, it’s also customary to have a big party – at least in Berlin it was – and to give gifts to mark this big milestone. Just because we are in Scotland now, doesn’t mean our youngest will miss out though. He’ll still get a Schultüte and a big party, and for gift ideas I reached out to the members of a business group I’m in to see if any of them would like to collaborate and I’m delighted to be able to share some of their products with you. As you know, I generally only recommend things here on the blog that we’ve used and loved ourselves, so all the recommendations have been put to the test and gained our seal of approval. 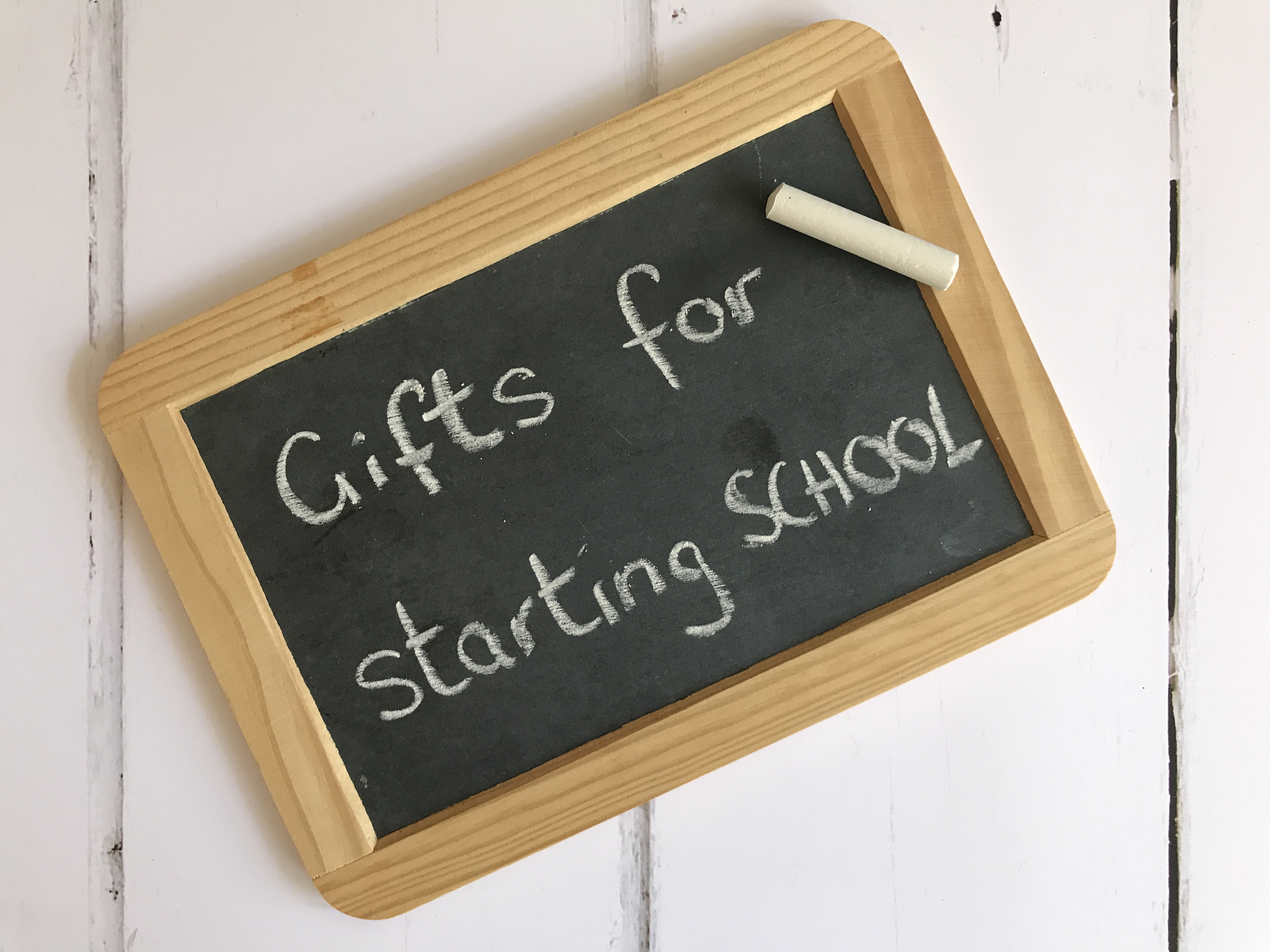 Please note: We received free samples of the items mentioned below, in exchange for an honest review. However, all views and opinions are our own.

Every kid needs a pencil case at school, and what better way to stand out from the crowd of other pencil cases than with a personalised one! 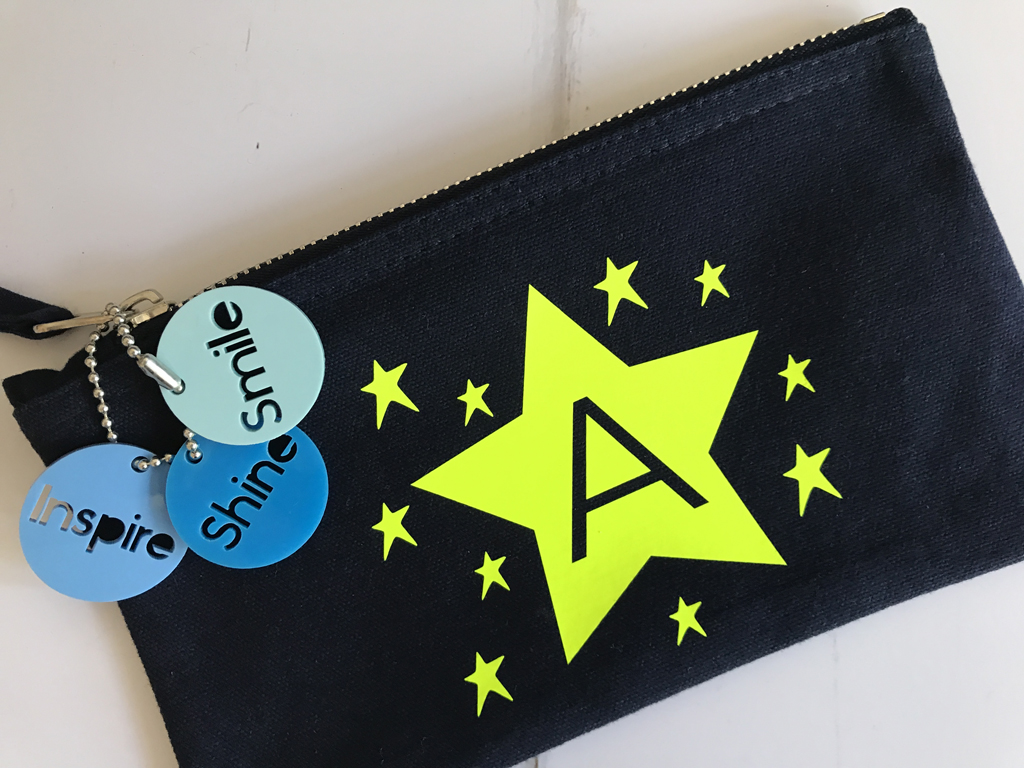 We were sent one of these gorgeous personalised pencil cases from Scamp, an independent British company founded by sisters Stacey and Jennifer. Their ethically sourced products stand out with their bright pops of colour and positive affirmation for kids, and the personalised pencil cases are no different. The navy zip fastening cases are adorned with stars and your child’s first initial, and come in a choice of bright pink, bright yellow, or white. In addition, you get you to choose three confidence boosting charms from a selection of ten different words or phrases in varying tones of blue or white, to complement the navy of the pencil cases. 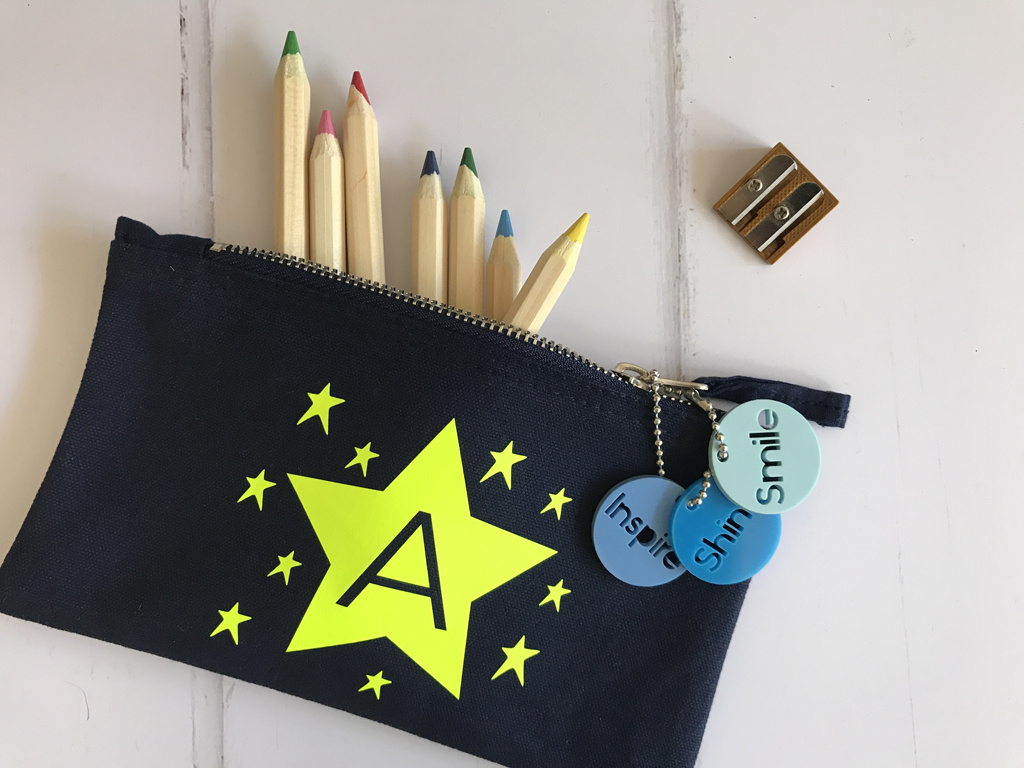 Mr Fox opted for yellow stars on his pencil case, and chose the charms ‘Inspire’, ‘Shine’ and ‘Smile’ (in case you were wondering, Mr Fox is of course his nickname, his first name is Alfred hence the A on the pencil case). The pencil case has now been safely tucked away in his school bag, together with a new set of colouring pencils, waiting for school to begin – but not before giving the pencil case a test drive! Mr Fox loves his unique case, and says he gives it a big thumbs up. 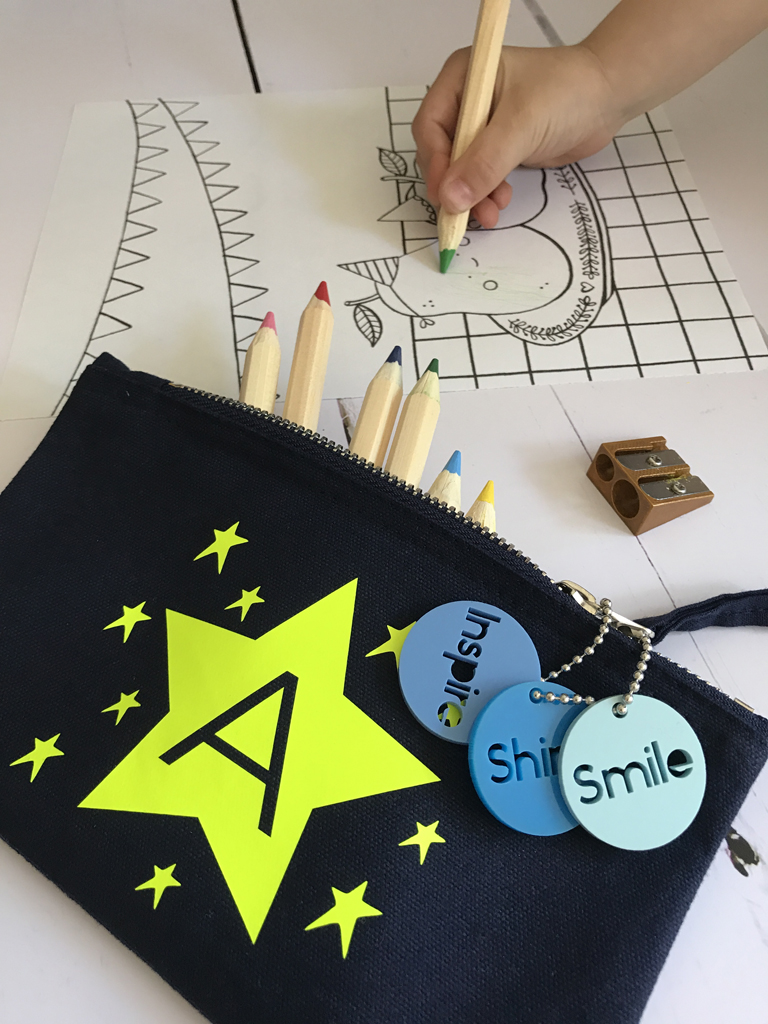 You can order your own personalised pencil case with affirmation charms from the Scamp online store.

Starting school is a very proud moment for both children and parents, and one that is bound to be captured on camera. Instead of having the photos tucked away on your camera, phone and computer, why not get your favourite one printed out and display it in a special customised photo frame! Hugo’s Workshop – launched by Rebecca de Jager and named after her eldest son – provides beautiful customised wooden photo frames, which you can have engraved along the top or bottom of the frame, or both. 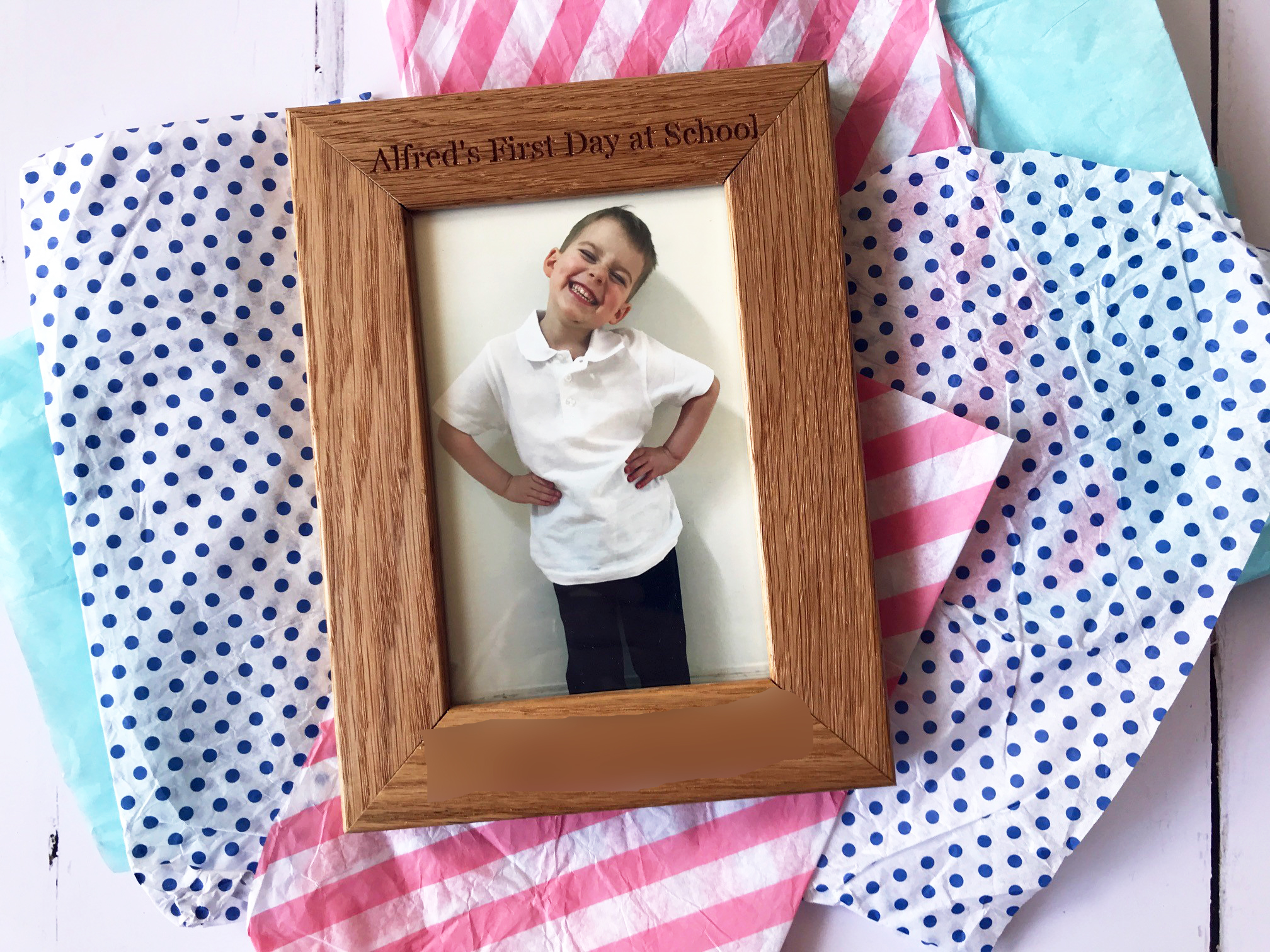 The solid oak frames come in either portrait or landscape format in a variety of sizes, and with four different fonts to choose from – or for an additional cost, you can even get your own handwriting engraved. We chose an oak frame in 6×4 in the portrait format, with the Georgia font. We had “Alfred’s First Day at School” engraved along the top, and the name of his school at the date of his first day engraved along the bottom (I have blurred out the date and name of his school in the photos for privacy/ security reasons). 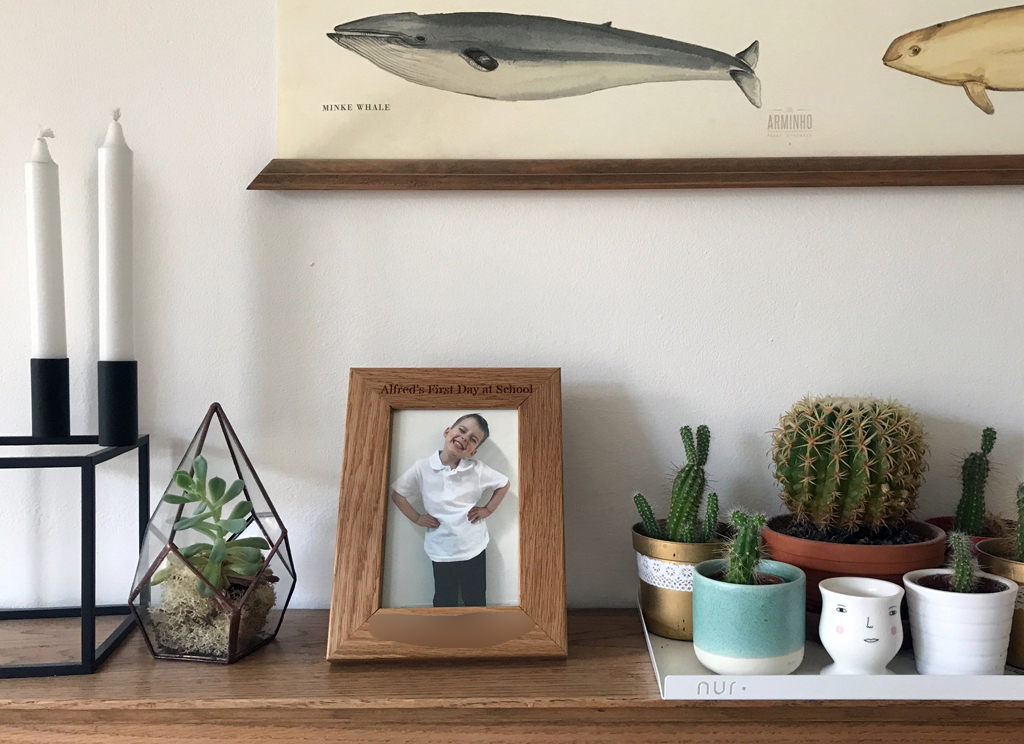 A couple of weeks ago Mr Fox brought home a “getting ready for school” bag from nursery, which included a sample uniform to try on. He was so excited about this, and we snapped a photo of him modelling the uniform, which is what I put in the frame to take the pics for this gift guide. I can’t wait to replace it with a photo of him in his actual uniform on his first day of school, and the frame will then take pride of place on our mantlepiece. I might have to order another frame in retrospect for his big brother, as I’ve just realised we don’t have his first day of school photo displayed anywhere. Oops.

You can order your own customised engraved photo frame from Hugo’s Workshop – they would be great for all kinds of other special occasions too.

The next gift idea is one your kids can grow in to, and is prefect for marking the begin of their school journey. Little Writing Company, launched by teacher Jo Britland, produces beautiful stationery and literacy workbooks. The Handwriting Practice Notebook starts out with the letters of the alphabet that can both be traced and then written out independently. It’s a great way for parents to support their children with some extra handwriting practice at home as they begin to learn their alphabet. 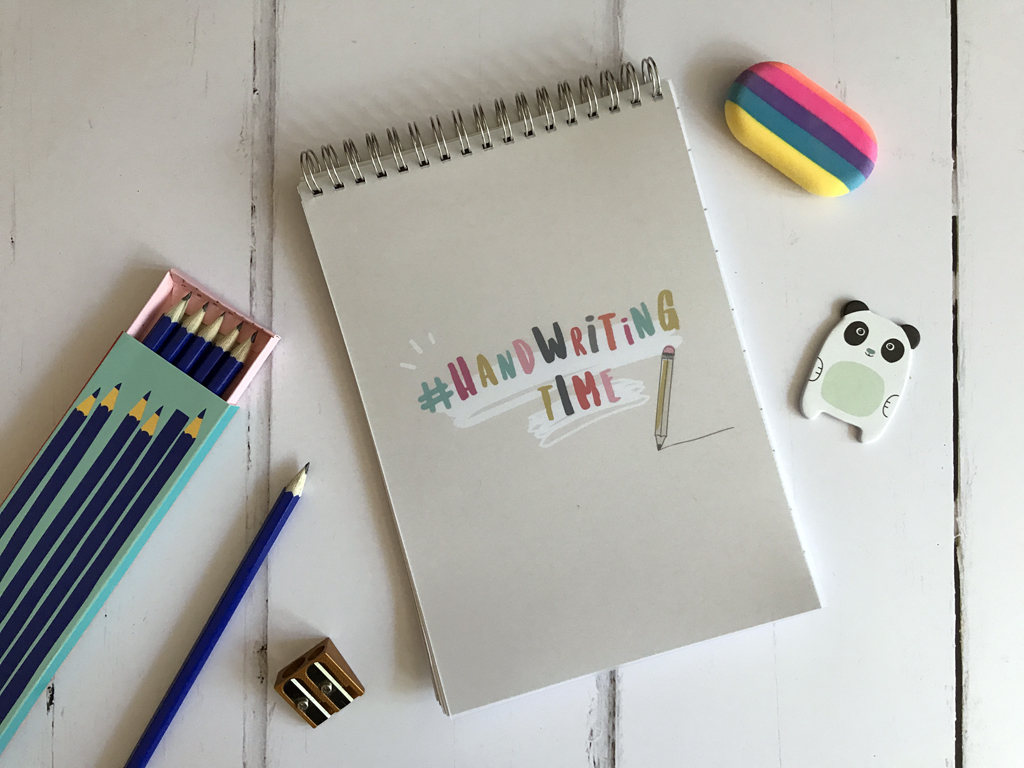 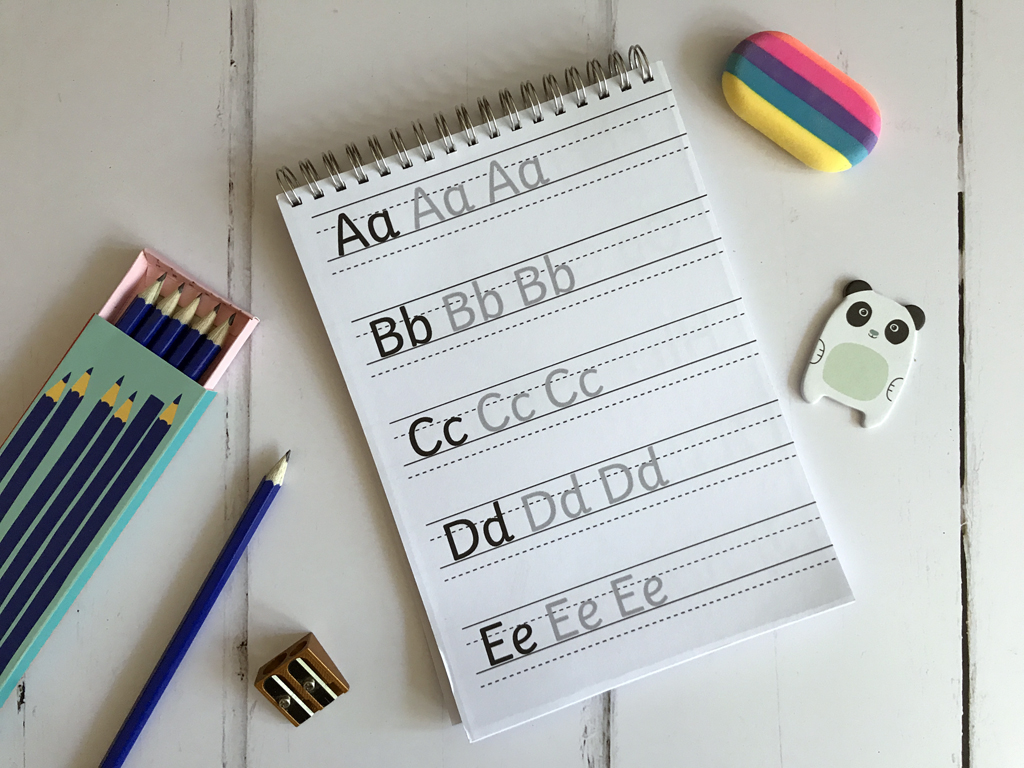 As the children grow older and start to learn to read and write their first words, they can move on to the high frequency phonic words that appear later in the notebook, and even later still there are some first simple sentences to try their hand at. The wire bound notebook has 60 A5 pages of handwriting practice, with thick card covers and extra plastic cover for durability. Mr Fox loves tracing over letters and words in his magazines, and I’m sure he’s going to love this – I’m keeping it a surprise for when he actually starts school! 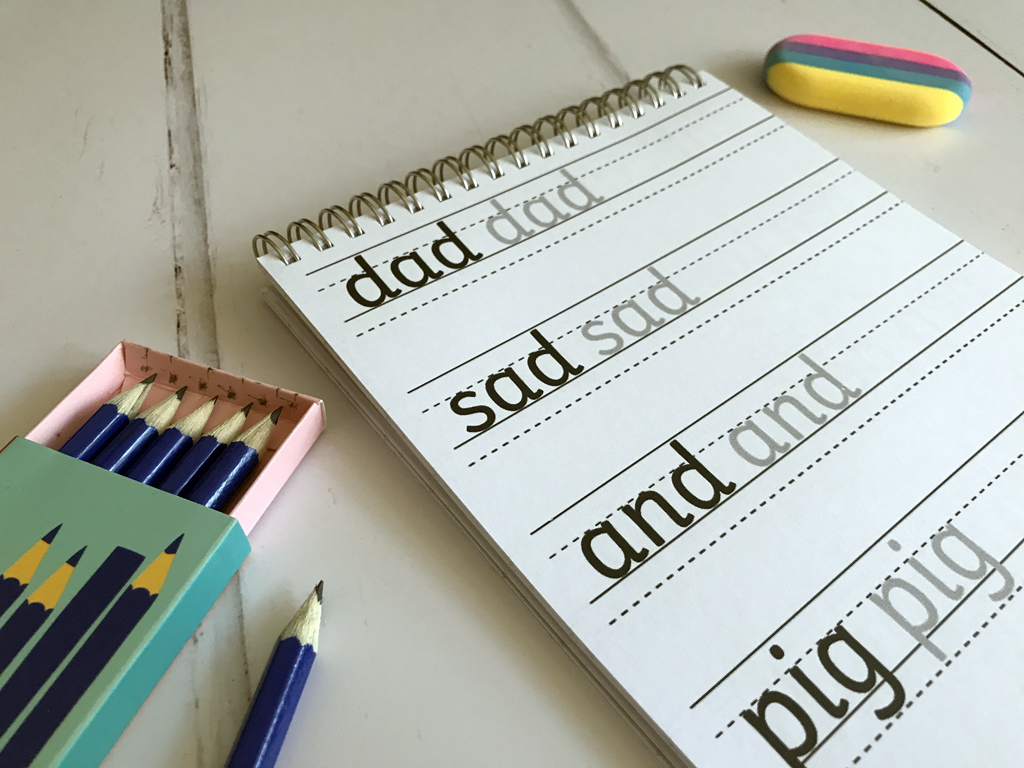 If you’re looking for a gift for older siblings too, then the Story Writing Activity Notebook would be a perfect choice. It’s designed to guide children through the story writing process with lots of helpful tips, prompts and writing exercises along the way. Like the handwriting notebook above, it’s wire bound and comes in A5, with 72 pages printed front and back. Mr Fox’s big brother loves making up stories, so he’s going to get this as a back to school treat in August. 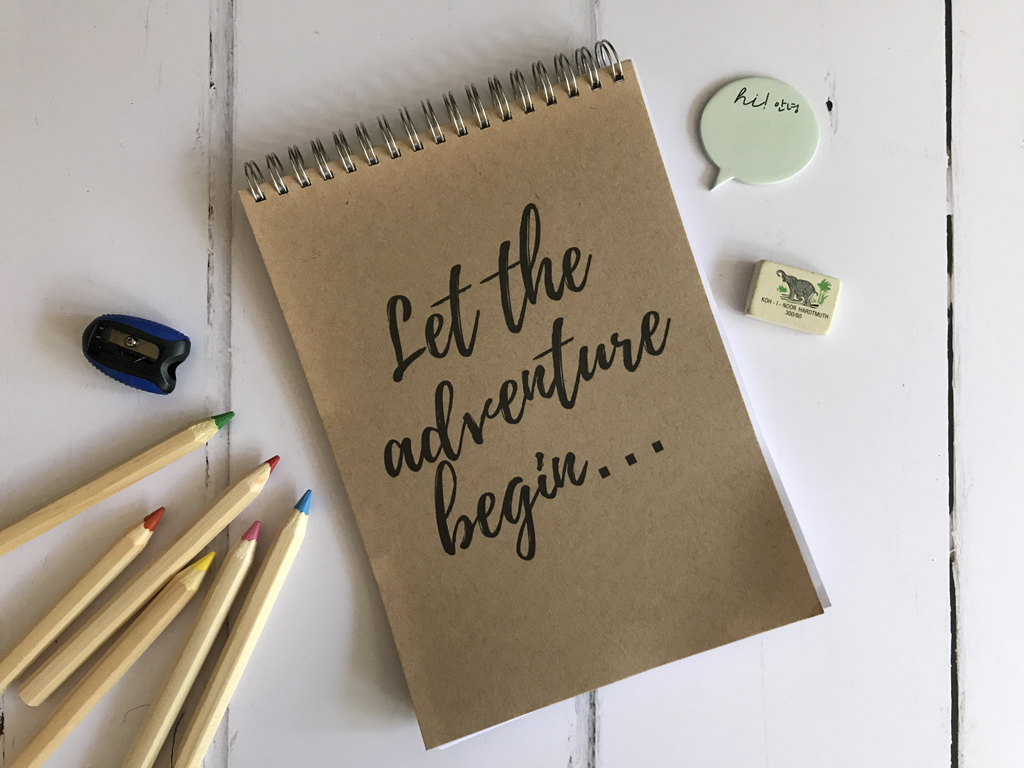 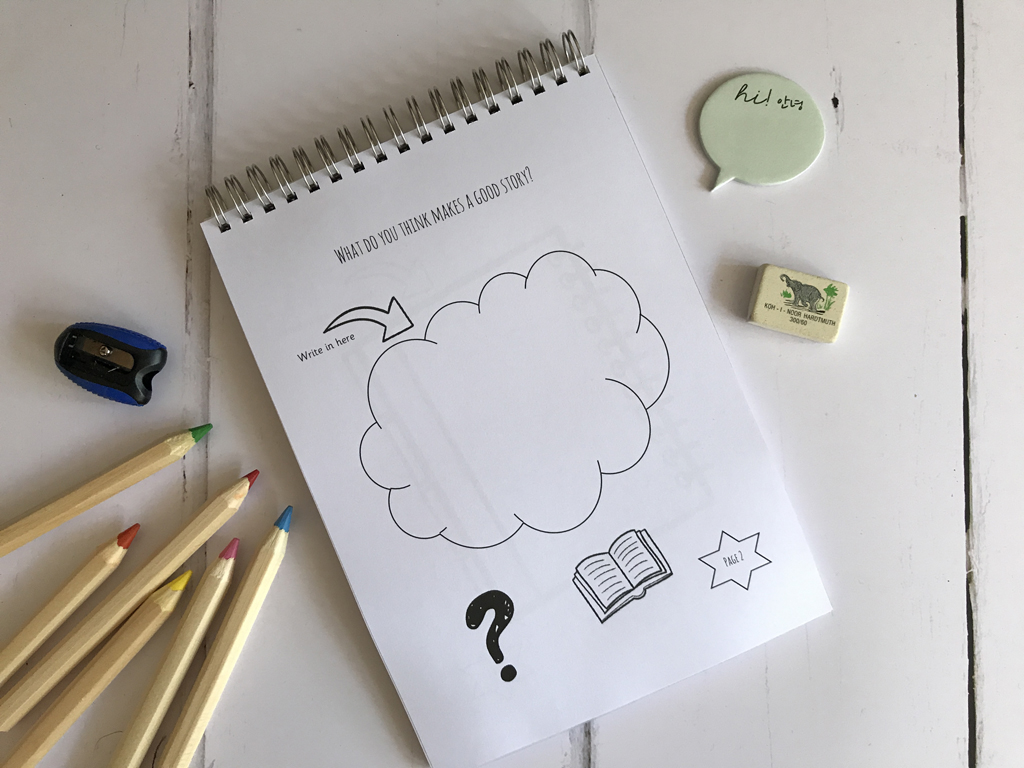 You can buy both the Handwriting Practice Notebook and the Story Writing Activity Notebook in the Little Writing Company online store, in a choice of covers, including personalised covers.

Another gift that kids can grow in to, is this fab little book by Jessie Wilson which was inspired by Jessie trying to teach her own daughter her times tables. Times Fables® makes learning fun, by teaching the times tables through stories that have specifically been developed with visual learners in mind. 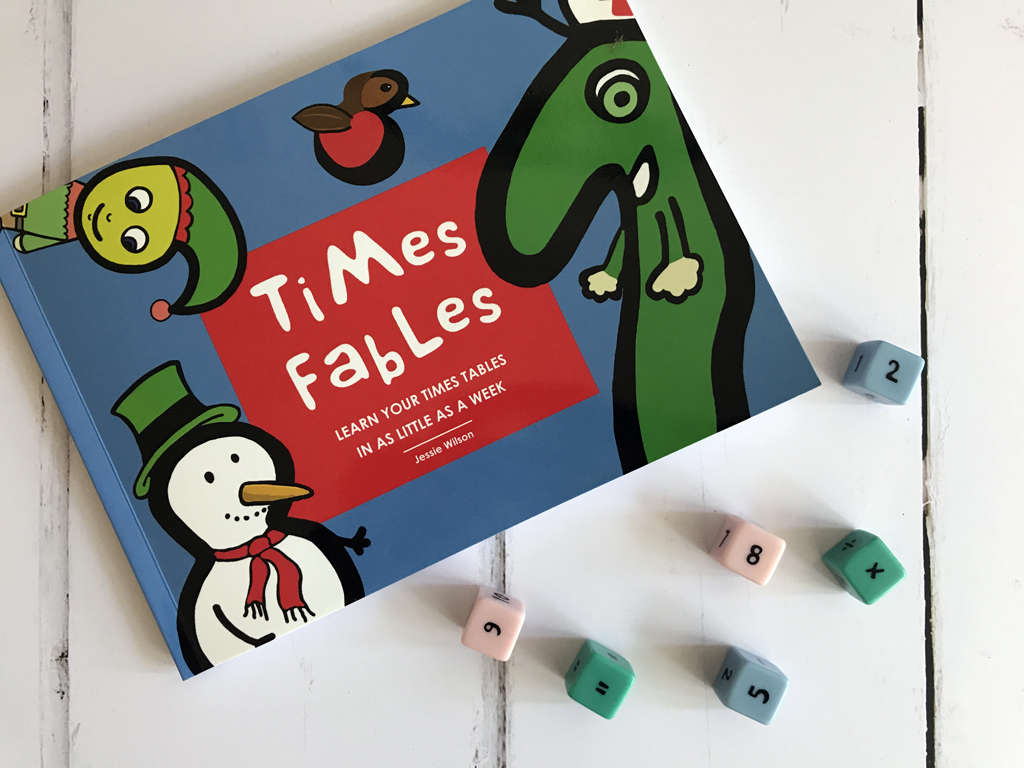 Once children have grasped the basics of multiplication, they typically master their 2, 5 and 10 times tables first, but after that many children struggle. That’s where Times Fables steps in. Each number has been turned in to a character – for example 3 is a robin and 8 is “Mrs Snowman”  – and the little stories around them act as a memory aid to help children remember their multiplication. The fun aspect of it also takes away some of the stress of learning. 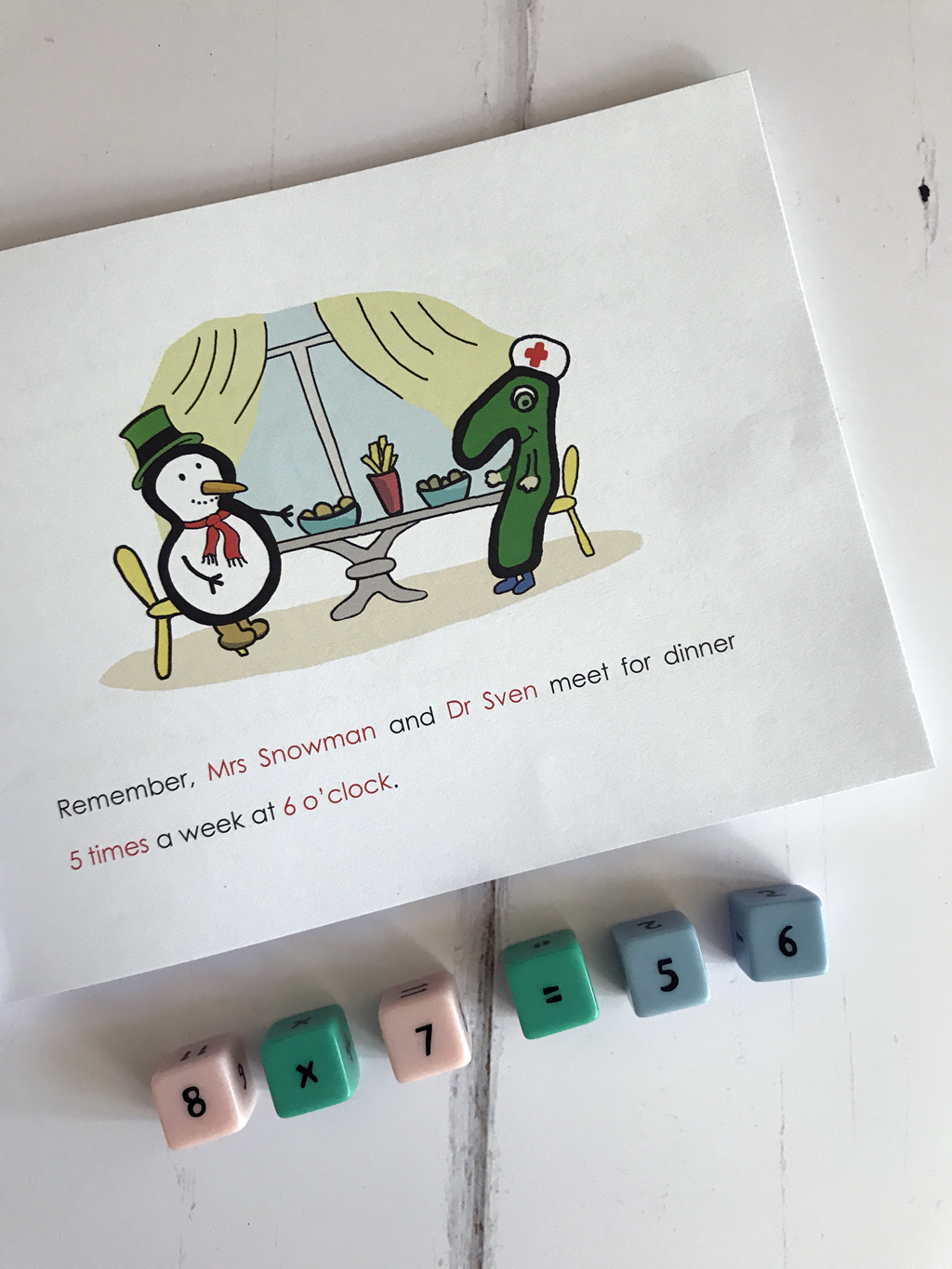 My eldest has been struggling with his times tables, and this book as really helped him to make progress. So as well as being a gift that school starters can grow it to, it also makes an excellent back-to-school gift for older siblings. You can find more information on Times Fables and order a copy of the book on their website.

Not only do the ideas make great gifts for starting school or going back to school, but by choosing them you would also be supporting small independent businesses! However, there are a few other gift ideas which are perfect for little ones starting school that I wanted to share. These are all things our eldest received when he started school three years ago.

Chances are, if your child has been attending nursery prior to starting school, they are already familiar with having to get up at a certain time. However, starting school marks a new milestone and a step further towards independence, to an alarm clock to start taking on some responsibility for getting up in the mornings makes an excellent gift. My eldest received one from his godmother as a gift when he started school.

At our school in Berlin, every child starting Primary 1 received a high visibility vest to wear on their way to school. Many children there walk or cycle to school on their own from an early age, and a high vis vest increases their safety. Depending on how your child will be getting to school, this is a great gift to consider – even if walking with a parent, it will increase their visibility, especially in the winter months.

And, finally, another really popular gifts for kids starting school in Germany are the “Sorgenfresser” dolls, which translates as “Worry Eater” doll. They are a bunch of cuddly monster dolls that come in many different designs and colours, but all have one thing in common: a zipper pocket as their mouth. Children can draw or write down their worries, and feed them to their Worry Eaters. A perfect gift for little ones who are anxious about starting school. There’s more info about them available on the Sorgenfresser website. In Germany, you can buy them in most well stocked toy stores – I haven’t seen them on sale anywhere here, but they are available in the UK via Amazon. 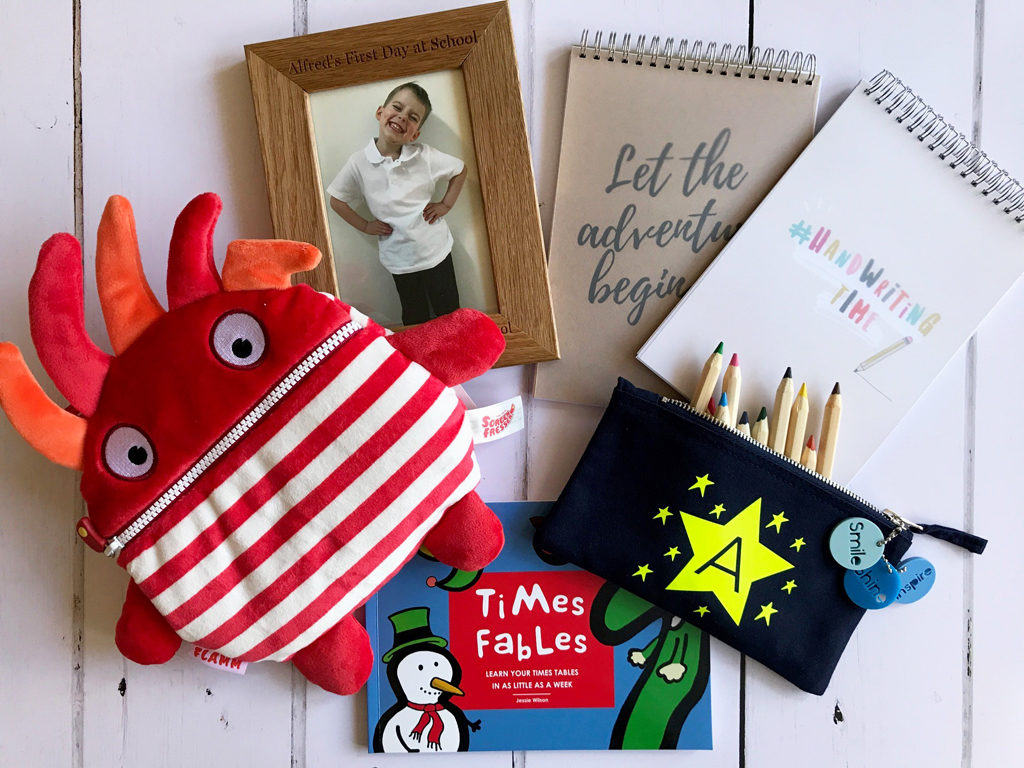